BACK TO ALL NEWS
Currently reading: Vanquish Vision heads up trio of new Aston Martin concepts
UP NEXT
Geneva motor show axed for fourth consecutive year

This is the Aston Martin Vanquish Vision concept, which closely previews the firm’s all-new mid-engined supercar due to go into production at Gaydon in 2022.

The car, which Autocar received exclusive access to ahead of the Geneva motor show alongside the AM-RB 003 hypercar and Lagonda All-Terrain Concept, marks the first time Aston has put a mid-engined model into series production and will line up alongside next-generation versions of the McLaren 720S and 488 GTB, likely priced at around £250,000. 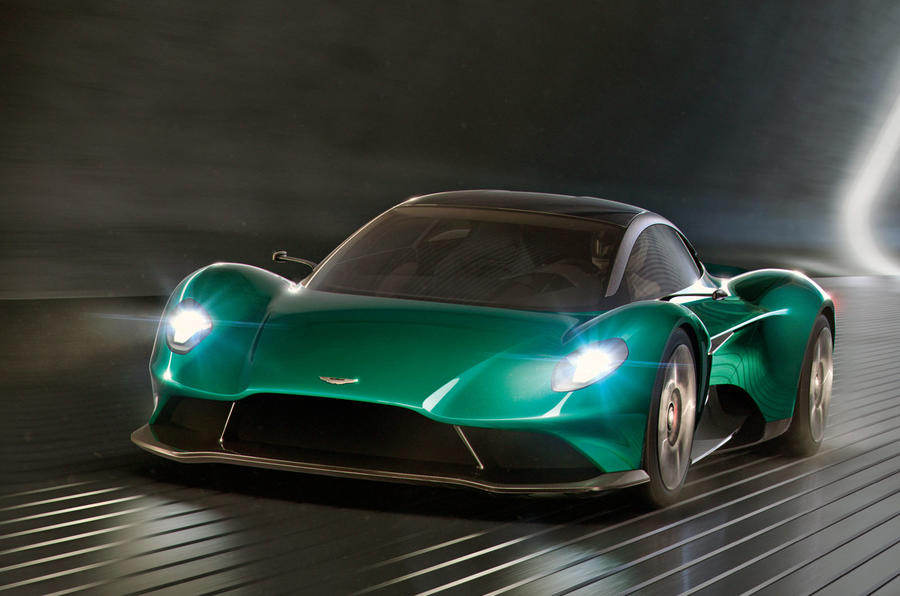 It revives the Vanquish name for Aston, too, which was last used on the front-engined GT the new DBS Superleggera replaced. The car has been in development for two years, and has been spearheaded by technical boss Max Szwaj, who joined Aston from Ferrari where he created similar models.

The Vanquish, codenamed AM9, will bring with it a brand-new, Aston-designed V6 engine that will be built in the UK.

The engine is twin-turbocharged, and is of an unspecified capacity. Aston boss Andy Palmer described it as a “little V6 that’s downsized”, with a likely capacity of around 3.0 litres given the configurations of similar engines from other car makers.

The engine was fired up for the first time in late January. It will also be used in the AM-RB 003, where it will be paired with an electric motor to become a hybrid, a configuration that’s also set to carry over to the Vanquish production car to help with low-end torque.

The next-generation McLaren 720S, also set to launch around 2022, is set to use a downsized V6 hybrid powertrain of its own. Ferrari is investigating electrified technology, too, as is Lamborghini, marking a significant shift in the supercar segment.

Underpinning the Vanquish is a new bonded aluminium mid-engined architecture that’s of a new design, inspired by the Valkyrie, but uses learnings and technical solutions from Aston’s front-engined models, too. 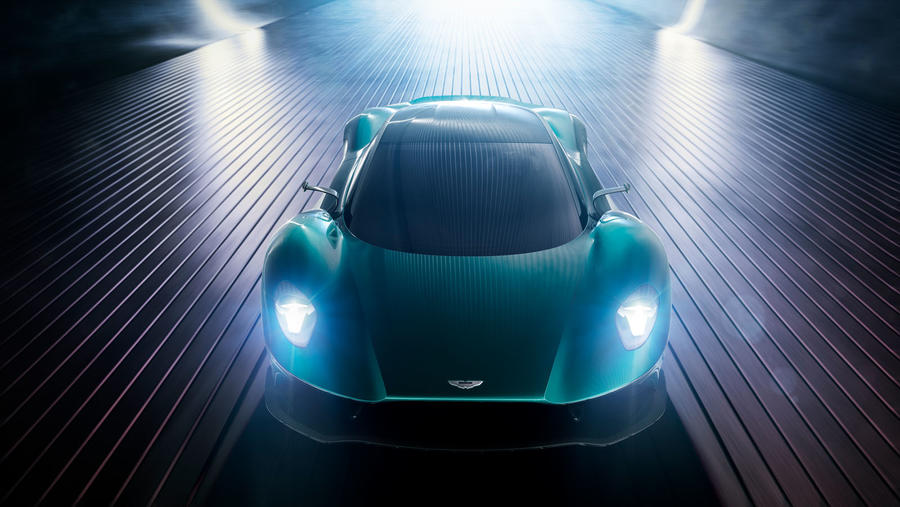 Further technical details have not been revealed by Aston, but the company will release them as the model progresses from this Geneva concept car to the full production model over the next three years.

The concept’s styling, which brings with it dramatic proportions not seen on an Aston before due to its mid-engined layout, is claimed to be more than 85% representative of the final production car, according to Aston design boss Marek Reichman.

“We do well at taking a concept to reality,” he said. “We do this to state our intentions for the proportions and surfaces. There will be lots of millimetre changes to this, as it’s not something we’ve done before.”

Reichman said inspiration had been taken from the Valkyrie in delivering an aerodynamic shape and surfaces in a beautiful Aston Martin way. “We’ve gone from the insect-like nature of the Valkyrie, and played tunes on the surfaces to develop them. The aero isn’t just aero – they’re simple, elegant solutions. Most of the downforce is created under the car.”

Reichman is also keen for the Vanquish to remain usable every day in production despite its supercar billing, hence why its aero isn’t as extreme as the Valkyrie in compromising things such as ingress and egress.

“There should be no reason for you not to want to drive it to Sainsbury’s,” he said. “There will be no excuse not to drive it.”

Palmer said that the Vanquish had a smaller footprint than it would have otherwise due to what the company had learned from working with Red Bull’s Adrian Newey.

“One of the real learnings with Adrian Newey is obsession with weight and mass, and package size,” he said. “Our designers are now pushing our engineers; cars were getting bigger but now we’re heading smaller, with cars packaged around the engine. It’s the reversal of a trend.” 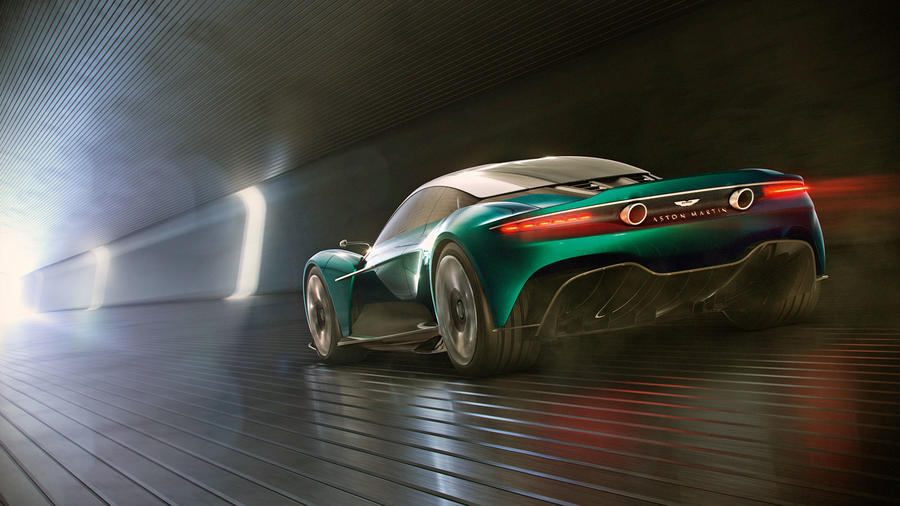 The Vanquish is the “best of what we know” at Aston Martin, said Palmer, and the firm had been laying the groundwork to be able to compete directly with supercar rivals for several years.

He added: “What legitimacy do you have? How do you compete with Ferrari, McLaren and Lamborghini? Since 2016, we’ve been fertilising that field, working with Red Bull in Formula 1, and with Adrian Newey on the Valkyrie to make the fastest production car ever. That’s why we’re also creating 003, to create that legacy and legitimacy for mid-engined cars.

“So that’s the real reason behind F1 and the Valkyrie, to lay the lines of legitimacy for the AM9 [Vanquish].”

Reichman said that the Valkyrie’s widespread appeal as the kind of car that extends beyond car enthusiasts will help it be recognised as an Aston, and Aston as a maker of mid-engined supercars.

“The Valkyrie is our most looked-at car, and it gets ingrained in the psyche,” he said. “It’s an iconic game-changer for us with its visual language. Everyone will recognise this [Vanquish] because of Valkyrie.”

The unique selling point of AM has been elegant,tasteful design. These just put the company further down the path of in-your-face, vroom vroom childishness. I guess it's the only way to make money, given the fact that most folk don't have taste (particularly the shopping centre dwellers with money in the middle East)
welly 5 March 2019

I just can`t understand how Aston Martin Design is capable of getting the styling so wrong so often.

A company with heritage, coolness beyond belief, sexy designs like the DB9 and V8 Vantage to take inspiration from, - it`s not rocket science. Yes design is largely a subjective art, however natural beauty was a key element of Aston, which other brands could only ever dream of, seems to be somewhat irrelevant today.

Ok, the new V8 Vantage isn`t bland, but its awful, Fiat Punto headlights, with a B+Q plastic make-do poor man`s grill where the identity, value and character should shine. `Not to mention the fast and furious rear styling which would happily fit into any Tuning Exhibition.

Now we have this Lack of Vision Vanquish Concept. Bland mixed with more bland, add to that some Jag headlights, plus some more blandness. Maybe they can look at some up and coming Chinese brands for inspiration, because they need it. A complete cohesive piece of generic blandness lacking totally in character and identity, giving no message whatsoever. Poor, weak, and offensively generic design. Not a single element that inspires and generates desire. Terrible design, where design should be everything.

I just can`t understand how Aston Martin Design is capable of getting the styling so wrong so often.

To be fair, the outside of the DB11 isn't terrible but the black separator to the roof doesn't help nor the roof rakes either.   Where it's really bad is the interior.   A steering wheel that looks like a out of shape 50p piece.   You can see where he left off with the previous Vanquish with air vents at odd angles.   The Broguing on the seats is terrible.   Far to much detail that doesn't cohesively come together.

The New V8 Vantage looks that it's been in a front and rear end shunt if you look at it from the side.   Honestly looks that the car's chassis is bent!   Front, well, it's not good with that vacuum cleaner nose.   Rear end looks that someone gave it a wedgie!   Centre consol that they simply dumped all the switches out without a second thought.

DBS with that awful nose that didn't work on the Rapide.   Inside they just took the overly fussy DB11 and added more fussiness.   And Broguing too.

And with Valkyrie, 003 and new Vanquish it seems that it's the true definition of Russian Doll models or the Goldilocks of cars!   One's too small, one's too big, and one is just right???

I really want better from Aston and I can only think they need to go out and find the next Ian Callum.

Jaguar rang, they want their CX75 back

Jaguar rang, they want their CX75 back

I honestly think the Jaguar is better looking.   Perhaps could do with a higher rear end, but overall yes, definitely.