BACK TO ALL NEWS
Currently reading: 2017 Volkswagen Atlas revealed for US market
UP NEXT
Grand touring: 1000 miles across Europe in the new Alpina B3

2017 Volkswagen Atlas revealed for US market

US-only SUV introduces new look and sits at the top of Volkswagen's SUV range; it won't come to Europe, but could be sold in China
Share
Open gallery
Close
Share story

The all-new Volkswagen Atlas large SUV will lead the brand's fightback in the US following the dieselgate emissions scandal.

The Atlas arrives after a lengthy development period and will be sold in the US market, but not in Europe. It gets a muscular design to match US preferences, which is inspired by the design of the Crossblue concept that was first shown three years ago.

The Atlas has squared-off daytime running lights and a thick front grille, with muscular wheel arches and sharp tail-lights. The car’s look is distinctive and quite different to the rest of Volkswagen’s range, emphasising the effort the car maker has made in appealing to American buyers. 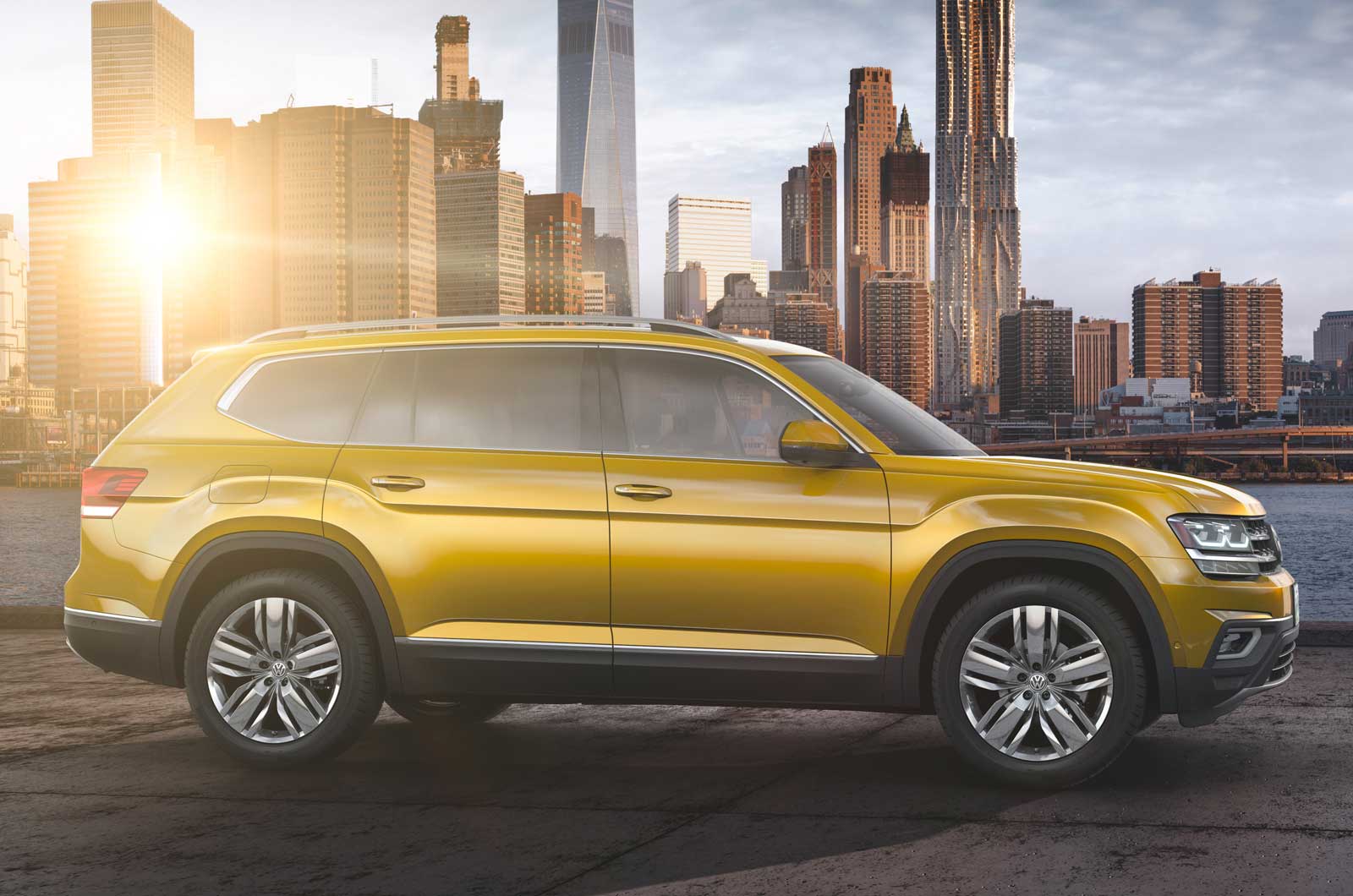 At launch, the Atlas comes with the choice of two engines: a turbocharged 2.0-litre four-cylinder TSI with 238bhp and a 3.6-litre six-cylinder VR6 with 280bhp. Both units send drive exclusively through an eight-speed automatic transmission, but the 2.0-litre has two-wheel drive only while the larger VR6 can be specified with 4Motion four-wheel drive. This technology offers several drive modes to improve traction and performance on varying surface conditions.

The Atlas is based on the Volkswagen Group's MQB architecture, but it's significantly larger than its siblings; at 4922mm long, the Atlas is 225mm lengthier than the Skoda Kodiaq and even 121mm longer than the current largest Volkswagen SUV, the Touareg.

The Atlas is 1979mm wide and 1767mm high, making it 38mm wider and 35mm taller than the Touareg. Not only is it larger than any VW passenger car on sale in Europe, it’s also Volkswagen’s largest US model, too. 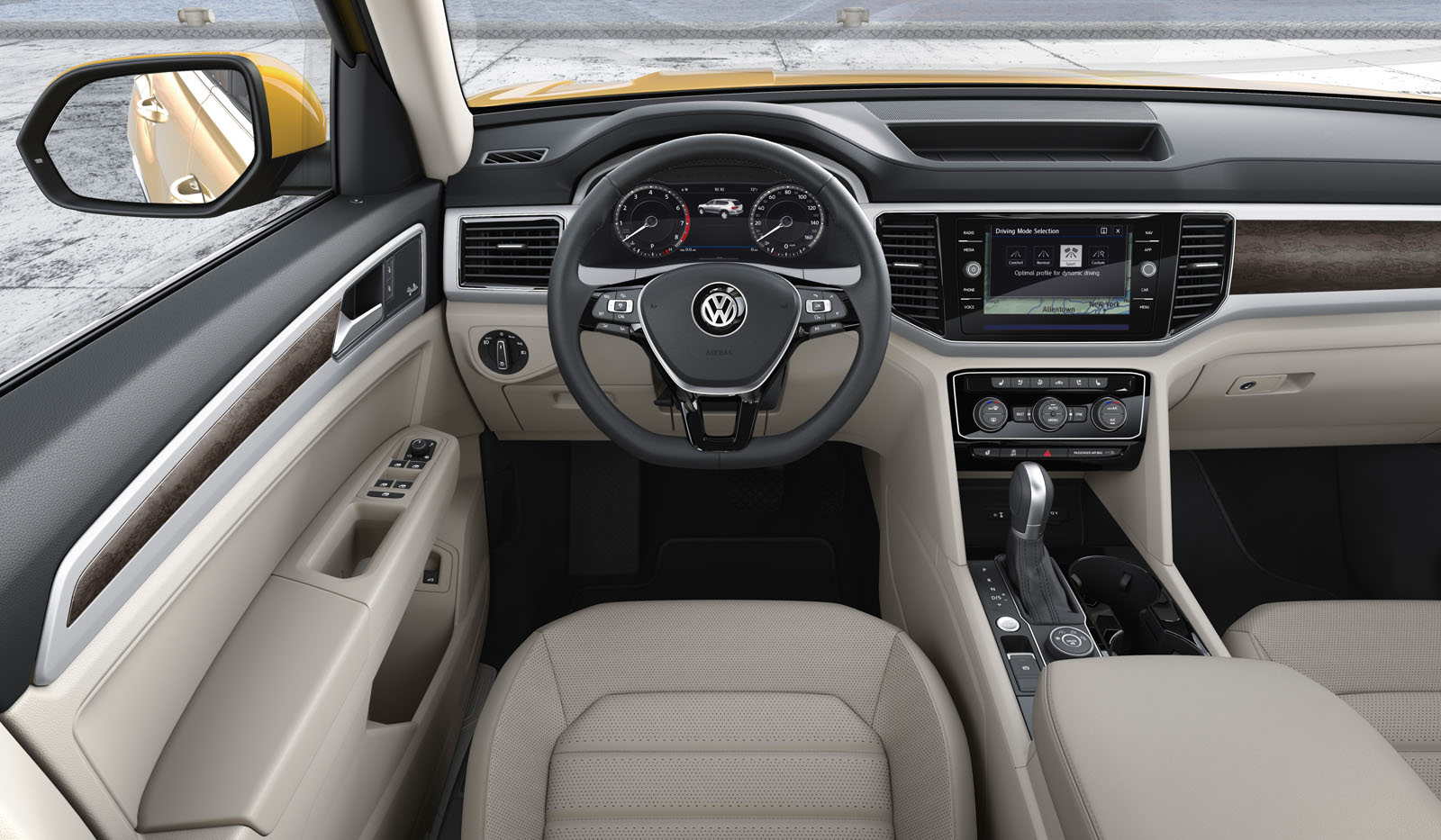 The cabin features the usual raft of VW switchgear and dials, shared with the rest of its range. This includes touchscreen infotainment mounted in the centre console and an optional digital screen behind the wheel, the display of which can be customised according to driver preference.

The car’s infotainment can be specified with Volkswagen Car-Net, which brings Apple Carplay, Android Auto and Mirror Link, while an optional Fender Premium audio system, complete with 12 speakers and a 480-watt amplifier, is claimed to be the most advanced ever fitted to a Volkswagen.

Driver assistance systems include adaptive cruise control, forward collision warning, autonomous emergency braking (AEB), blind spot monitoring with a rear traffic alert system, lane departure warning and park assist technology. VW claims that the Atlas is also the only car in its class to come with an automatic post-collision braking system, which keeps the brakes applied in the second phase of an accident to prevent further impacts. 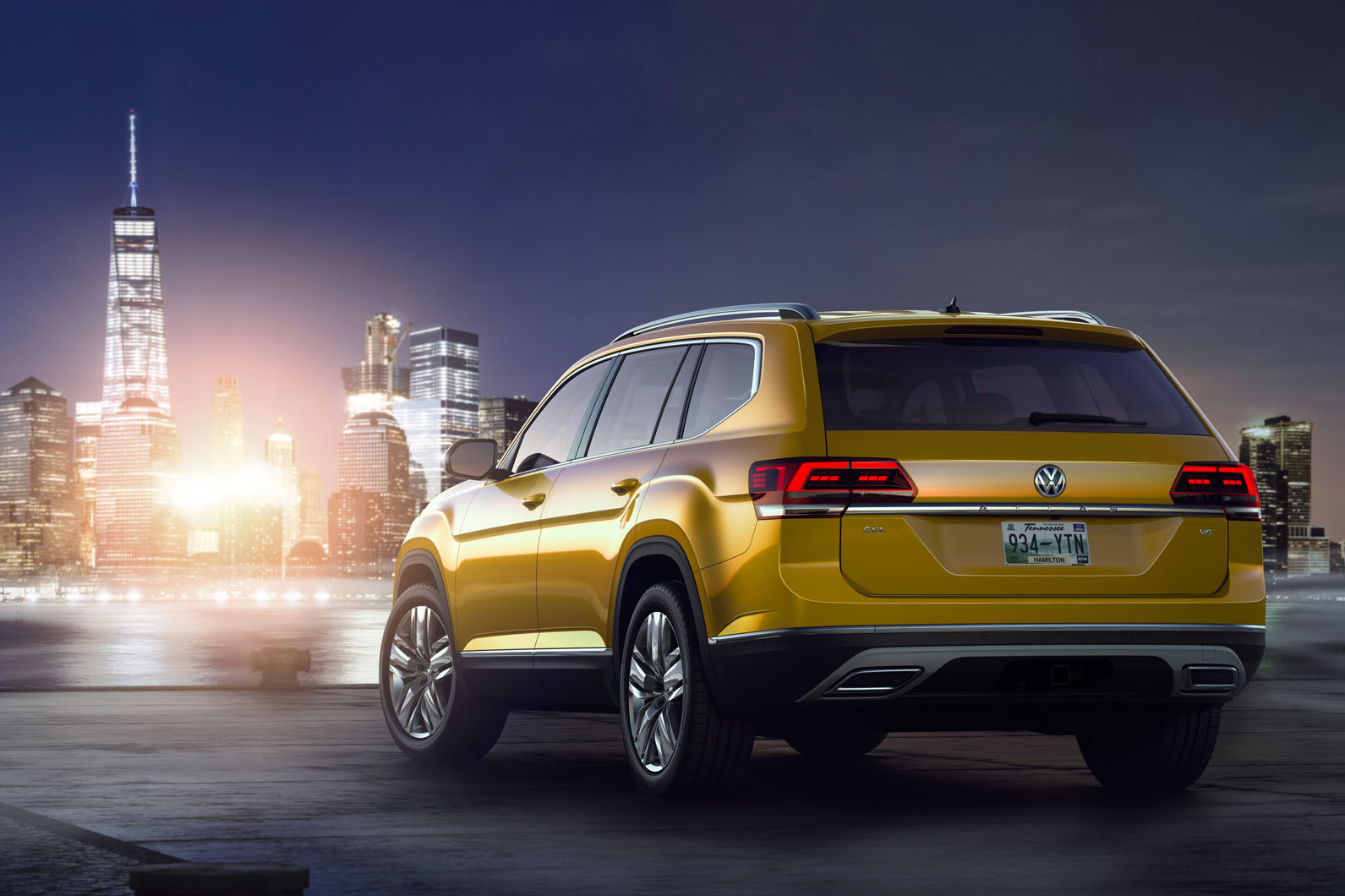 Along with this new safety system, the Atlas sets itself apart from the rest of VW's SUV range with the biggest seating capacity. Three rows of seats make the Atlas a genuine seven-seater that VW says can easily carry seven fully-grown adults and their luggage. VW has paid special attention to making access easy, devloping a unique seat folding mechanism specifically for the Atlas's second row of seats to maximise space into the back.

At this stage, the US is the only confirmed market for the Atlas, but China is understood to be another potential area of interest in the future.

The US models will be built in Chattanooga, Tennessee, US next year. Pricing and further technical information will be released before order books open.

Will probably go down like a lead balloon after the scandal

28 October 2016
Not much hope for residuals with such a tarnished image .

Not much hope for residuals with such a tarnished image .

We might be surprised. Volkswagen may have a lack of engineering talent, but their marketing abilities are second to none - just look at how many UK consumers still believe that VWs are the best and most reliable vehicles on the road. I'm sure they'll do their best to 'manage'their image with US customers.

28 October 2016
Autocar: "The car's look is distinctive and quite different from the rest of Volkswagens range."
Me: "Rubbish. It looks link directly to the Amarok pick-up, and the new Tiguan."
Don't know why VW are not selling it in Europe. I would imagine it would sell well against XC90s, Discoveries, etc. and big cars give big profits.

"it won't come to Europe"

28 October 2016
That this is on the transverse engined MQB platform rather than the longitudinal MLB2 platform of the new Q7.
No idea how the Touareg fits into the VW range with this

Quite distinctive compared to

28 October 2016
Quite distinctive compared to other VWs, yes, but copies the large US SUV template to the letter, even down to the shape of the rear lights and plump cream interior. We in Europe get the Kodiaq, which is much the same car. The Touraeg / Cayenne / Q7 is a more sophisticated machine altogether with a proper longitudinal drivetrain, if buyers care about such a thing.

Why no European Sales????

28 October 2016
I'd be up the front of the cue to buy one if it came to Europe, I have three kids I want a vehicle with plenty of space, I don't want to drive another MPV and I don't want to jump up to a Discovery, RRS or Q7 priced vehicle, this could come to Europe and undercut the Volvo XC90 price and sell like crazy, expecially in Scandinavia.

Am I the only one who sees it as an expanded Kodiaq?

A conservative attempt to gain back buyers?

17 November 2016
In these November 16th updated photos it looks like VWs are losing its visual appeal to make Audi models look nicer.
It looks rather generic and mediocre, could be mistaken for a Toyota.
The double vision fender creases is rather odd and forced while the front end sports a very American truck look. Overall its a rather safe and conservative look.

While it's larger than the Touareg it looks a lot less luxurious, so it will be interesting where it will fit in VW's model line.

A conservative attempt to gain back buyers?

17 November 2016
In these November 16th updated photos it looks like VWs are losing its visual appeal to make Audi models look nicer.
It looks rather generic and mediocre, could be mistaken for a Toyota.
The double vision fender creases is rather odd and forced while the front end sports a very American truck look. Overall its a rather safe and conservative look.

While it's larger than the Touareg it looks a lot less luxurious, so it will be interesting where it will fit in VW's model line.