The new CR-V gets a hybrid variant for the first time, and Honda promises better ride quality across the line-up
Open gallery
Close

The hybrid version of the fifth-generation Honda CR-V, achieves 120g/km and 53.3mpg for the front-wheel drive model, and 126g/km and 51.4mpg for the four-wheel drive variant, the brand has announced.

The CR-V, which rivals the Volkswagen Tiguan, goes on sale in Autumn with Honda’s 1.5-litre VTEC Turbo petrol engine with a six-speed manual or CVT transmission, with prices starting at £25,995, and rising to £36,455 for the top-spec, CVT-equipped car. The hybrid, previewed by a CR-V Hybrid Prototype shown at the Frankfurt motor show will be introduced in early 2019.

There will be two powertrains available: a 1.5-litre turbocharged VTEC petrol engine, available with either a manual or CVT gearbox, or a hybrid 2.0-litre i-VTEC petrol engine with two electric motors - one for propulsion and one electric generator motor - which was previewed by a prototype version at last year’s Frankfurt motor show. Honda UK boss Dave Hodgetts predicted that an equal split between petrol and hybrid sales in the UK would take three years.

The CR-V, which was revealed at Geneva motor show earlier this year, will be offered with the options of seven seats for the first time. Four trims are available - S, SE, SR and EX, with the cheapest S grade being two-wheel drive and five-seat only. The seven-seat car (the first time a third row has been offered on the CR-V), starts at £30,655, and is only available as a four-wheel drive car, with a choice of only SE or SR trims.

The new model does not get a diesel, a dramatic move given that 60% of current CR-V sales in the UK are diesel. Hodgetts said he believe plenty of people would turn to petrol instead, but added that "higher mileage drivers would wait for hybrid". Deliveries for the petrol CR-V start in autumn, while the hybrid - only available on the five-seat version - arrives in 2019.

The gearbox on the hybrid is a new single fixed-gear ratio transmission, which Honda claims ensures smoother torque delivery. A system called i-MMD (Intelligent Multi-Mode Drive) manages the powertrain, so drivers don’t have to switch between the three drive modes - EV Drive, Hybrid Drive and Engine Drive. The Atkinson cycle engine relies on the electric motor for low-end torque, but the motor can also assist the 2.0-litre petrol engine when required. The car’s underbelly has been specially sculpted to improve aerodynamics and improve fuel economy.

The brand describes the CR-V’s chassis as "the most sophisticated" one on the model yet, with the main goals being improved ride quality and better capability off-road.

Honda claims that the CR-V seven-seater with a third row of seats will have class-leading access and leg room for the rearmost seats. Outwardly, it’s grown in every direction to accommodate the extra interior space.

Hodgetts said take-up of the seven-seater would be "lower than you'd think", but added that plenty of customers have previously asked why the brand does not offer a seven-seater.

The car’s ground clearance grows to as much as 208mm for four-wheel-drive petrol cars, contributing to what Honda claims will be true off-road potential.

Tech highlights on the new CR-V include two 7.0in displays - one in place of traditional dials and the other serving as the main infotainment display. A powered tailgate also features, with a system that prevents the door from scraping low ceilings. 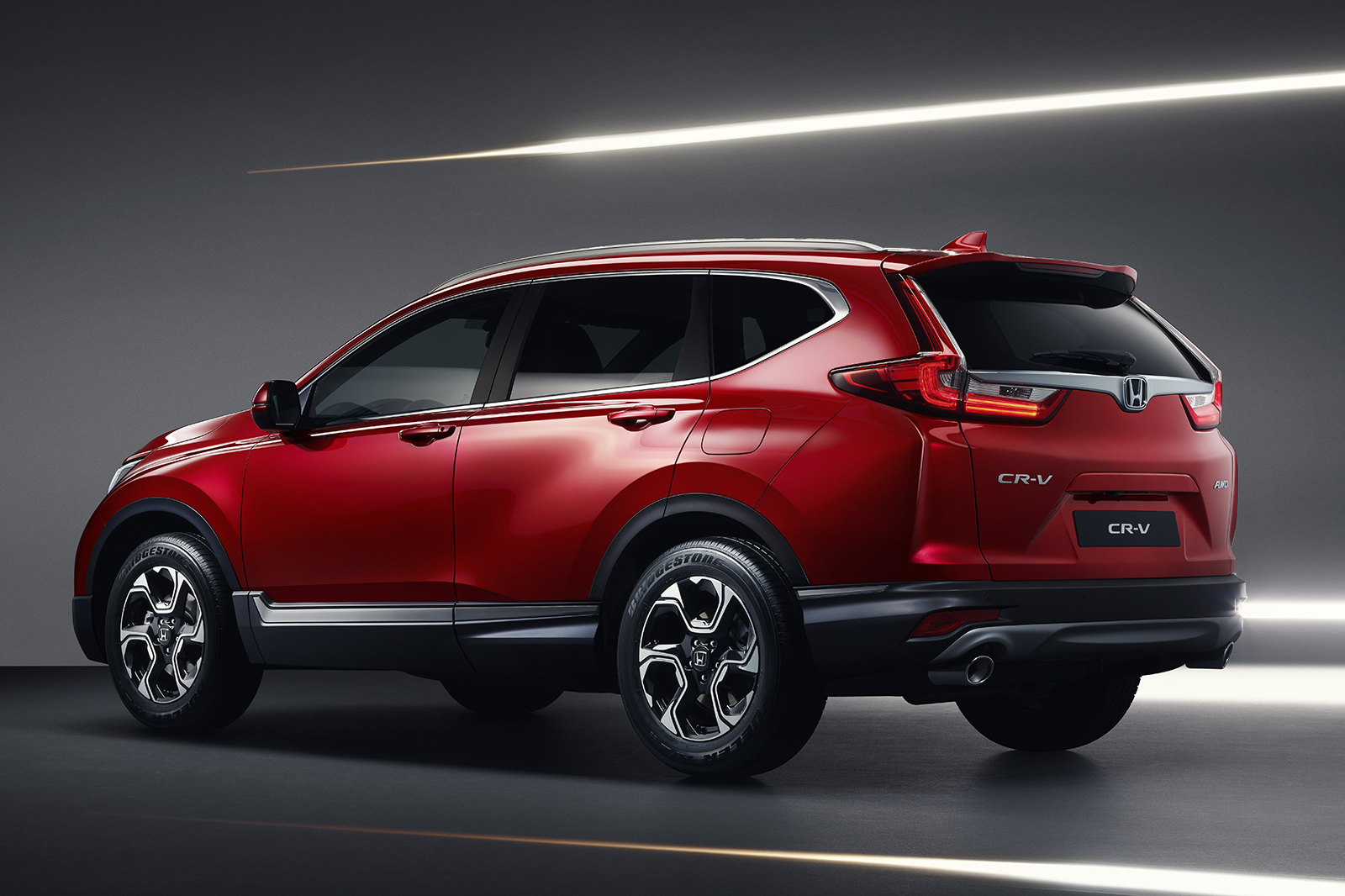 The model, which has only has subtle exterior changes, is already on sale in America, but this is the first time it's been seen in European specification.

Deliveries for the petrol CR-V will start in autumn, while the hybrid arrives in 2019. Rivals will include smaller SUVs such as the Volkswagen Tiguan and Nissan Qashqai, as well as larger offerings including the Nissan X-Trail and Ford Kuga.

The CR-V was Honda's third biggest seller in the UK last year, after the Jazz and Civic. Once the new model is on sale, Hodgetts is hoping for sales of 15,000 annually in the UK. He admits the majority of buyers will be loyal Honda customers, but hopes the introduction of the hybrid variant and seven-seat option will bring new buyers to the brand too.

Just need to see the prices now but with a only a modest sized battery hopefully cost won't be too high.

With this sort of power, emissions and fuel consumption, for a now pretty large SUV with 4WD is excellent, diesel RIP. Great to see Honda getting some mojo back with its engineering.

With a lot of companies applying a 130g/km ceiling on petrol vehicles, this has only one competitor if you want a mid sized non-diesel SUV, the Karok tsi, but that doesn't come in 4wd and the Honda is more spacious and powerful and even with 4wd still ducks under the radar. These are going to sell into fleet really well.

Could be a bargain.

when Honda enable me to have anything other than funeral black interior fabric or leather trim without buying the top model we will come back to them, in the meantime it is BMW or LR for us again...