The new Skoda Kamiq small SUV has been spied testing ahead of its unveiling at this year's Geneva motor show.

The Nissan Juke rival was photographed sporting minimal disguise, confirming that it will feature styling cues that put it closely in line with its larger siblings, the Karoq and Kodiaq. The shots also show that the Kamiq closely follows the design established by the Vision X SUV concept that Skoda displayed at last year's Geneva show.

The Czech firm recently released an official interior image, showing that the Kamiq takes on Skoda's evolved interior design first revealed in the Scala hatchback. It has previously teased the car with sketches of its exterior styling.

While many interior elements are familiar, the infotainment display – up to 9.2in across on top models – is positioned higher up to better place it in the driver's field of vision. More soft-touch materials and colour options are also said to feature.

Earlier this year, Skoda confirmed that the model would be called the Kamiq. The name was taken from an Inuit word meaning "something that fits as perfectly as a second skin in every situation", according to Skoda. That fits in with the convention first established by the Kodiaq, which was named after the Alaskan Kodiak bear.

Skoda already sells an SUV called the Kamiq in China, but that car is based on a localised platform shared with the Chinese version of the Rapid saloon and isn't technically related to the new Kamiq.

Based on the same version of the Volkswagen Group MQB platform as the Seat Arona and Volkswagen T-Roc, the Kamiq will be the third and smallest model in Skoda’s SUV line. It's tipped to have a longer wheelbase than both the Arona and T-Roc, potentially offering greater interior space.

Under the skin of the Skoda Vision X concept

The Skoda Vision X concept that was shown at Geneva in 2018 and previews the Kamiq features an innovative compressed natural gas (CNG) powertrain designed to bring focus to the way increasingly tightening regulations on CO2 emissions in the European Union are set. CO2 emissions of a car are currently determined purely by its exhaust output; this doesn’t take into account ‘well to wheel’ calculations of CO2 created during the production of energy.

The CNG hybrid system in the Vision X features a 1.5-litre four-cylinder turbocharged engine that runs on CNG and drives the front axle with 129bhp and 184lb ft of torque. The engine is supported by two electric motors: a belt-driven starter-generator that also powers the front axle, with a second 27bhp electric motor on the rear axle. That motor offers 52lb ft of torque from standstill, although the use of a gearbox allows it to bring 737lb ft to the road. 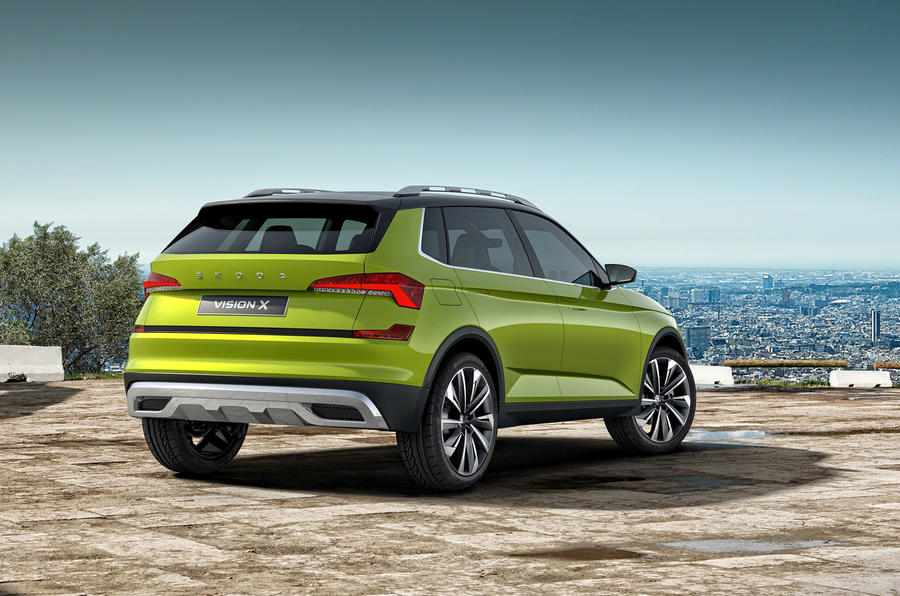 The system is front-wheel drive as standard and offers four-wheel drive when needed, using the rear electric motor for acceleration or traction. It is also capable of running for around 2km in electric-only rear-wheel drive. The powertrain has a 0-62mph time of 9.3sec, with a top speed of 125mph and a claimed CO2 output of 89g/km.

The CNG is housed in two tanks, one under the rear seat and one behind the rear axle. The electric motor is powered by a 48V, 1.5kWh lithium ion battery – recharged under braking – that Skoda says was chosen to balance extra weight and energy storage. 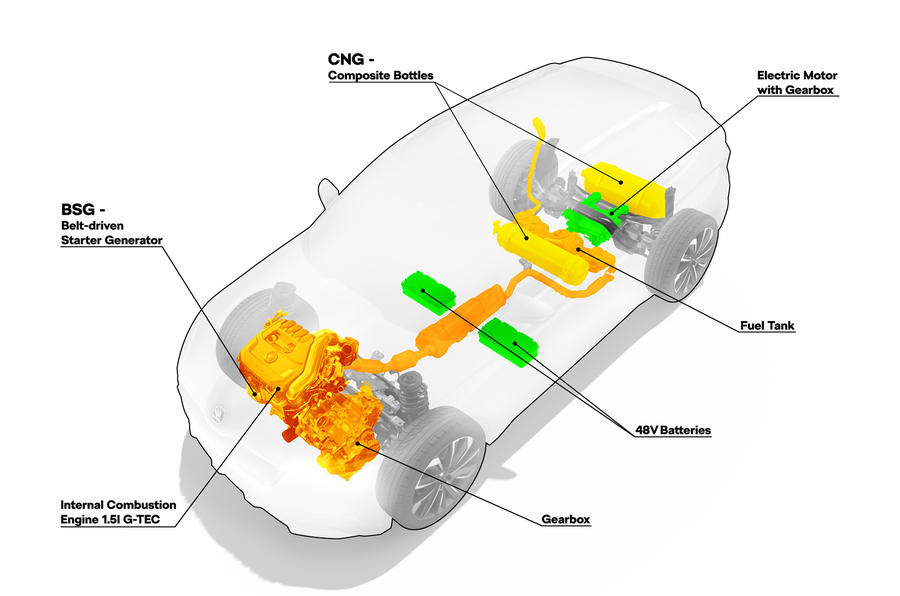 There is also a reserve petrol tank, largely to ensure the powertrain will start in very cold weather, that gives the concept a total range of around 400 miles.

The system has already been tested in a converted Karoq. Martin Hrdlicka, Skoda’s head of powertrains, said the decision to use the CNG hybrid system on the Vision X was, in part, to showcase a way to effectively bring four-wheel drive to smaller vehicles. “Four-wheel-drive machines make up 10% of Skoda sales. There’s no 4WD in the entry-level A segment, so this can help us offer a car of that size with four-wheel drive.

“It would also suit a car the size of the Karoq. You lose a little boot space, but we put the bottles and the battery in the space provided for the spare wheel, so it’s only a small reduction.”

The Kamiq is unlikely to be offered with the compressed CNG powertrain, at least initially.

While officially a design study for an 'urban' compact crossover, the exterior of the Vision X gives heavy hints at what the production Kamiq will look like. The front of the car – in particular the grille (although on the Vision X it is made from a single piece of glass) and ‘power dome’ on the bonnet – echoes the Karoq and Kodiaq.

But there are some design features new to Skoda. The lights have been raised, with thin daytime running lights and indicators above the main headlights. At the rear, the Vision X features L-shaped tail-lights that line up with a similarly shaped bumper reflector.

Notably, the rear bootlid of the concept doesn’t feature a Skoda logo, with the brand name spelt out instead. That has set a new style for the brand that has been followed by the Scala and Kamiq.

The interior of the Vision X features elements that can be seen in the interior of the Scala and Kamiq. The wide dashboard contains a large, centrally located touchscreen that sits above a small ‘wing’ designed for resting a hand on while using the screen.

There are also some design concepts that are unlikely to be seen on production models, including a 2+2 seating layout and the inclusion in the boot of long boards (and a drone) – Skoda’s concept of a ‘last-mile mobility’ solution to aid urban commuters.

Pictures are not flattering in any way

reminds me of a bloated Favorit from the back... no thanks!!

Like the vast majority of mainstream cars these days, the styling and specification is so utterly predictable and so utterly boring. Once the Chinese manufacturers show they can produce functional, reliable cars at prices less than Skoda can, what's the future for the Czech brand? It's now got no USP at all, other than slightly cheaper versions of VW group products with extremely dull styling. The novelty of Skoda products being surprisingly good and the "clever" way of buying a VW product has gone, and so has any original thinking.

How so, James Attwood?