BACK TO ALL NEWS
Currently reading: New BMW M8 Competition leaks out ahead of 2019 unveiling
UP NEXT
New Morgan Plus Four CX-T is rally-ready sports car

New BMW M8 Competition leaks out ahead of 2019 unveiling

BMW's flagship 8 Series, the M8, isn't due to be revealed for several months, but an undisguised model has already leaked online.

The Mercedes-Benz S-Class Coupe rival is about to go on sale in standard form, with the M8 due to be revealed in mid-2019. Yet a BMW insider has papped images of what looks like a show model of the M-car in flagship Competition form, with no disguise and 'The M8' written on its number plates, and posted them on enthusiast site German Car Forum.

Competition badging features on the car's bootlid, while tell-tale signs this is the full-fat M model include quad exhaust tailpipes and reprofiled bumpers compared with the M850i, the current range flagship. 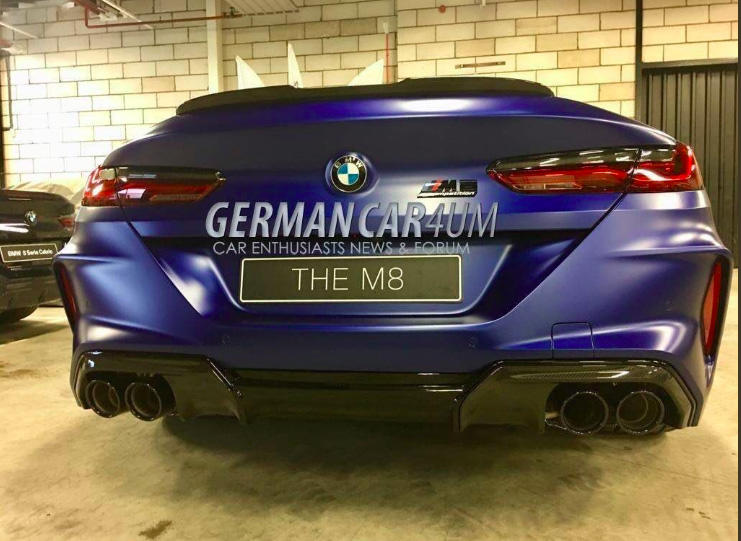 The M8 is set to make use of the M850i's twin-turbocharged 4.4-litre V8, with upgrades to produce around 600bhp. A 0-60mph time in the low three seconds is expected. It's not clear yet if the M8 Competition will produce even more power, but given the M5 Competition puts out 616bhp to the standard M5's 591bhp, it's more than likely.

Previewed by the M8 Gran Coupé concept back at the Geneva motor show in March, the Porsche Panamera-rivalling 8 Series Gran Coupé isn't due to arrive until 2019 - several months after the two-door variant. The M8 version arrives a few months after this.

The Gran Coupé is due to enter production in 2019. It appears largely similar to its two-door siblings, but with a raised rear roofline to provide more space for passengers.

Following the unveiling of the 8 Series coupé, the convertible and Gran Coupé were all but revealed in patent images showing their distinct designs. The pictures, which surfaced on Bimmerpost, confirmed the car's look would follow its two-door siblings closely at the front and rear.

Pictured previously during a testing stint at the Nürburgring, the design differences of the M8 coupé and convertible are visible. Aside from their differing tops, the variants also get their own bootlids to create different silhouettes.

So far, only the two-door 8 Series has been revealed, with the other two body types and M variants to be revealed later. 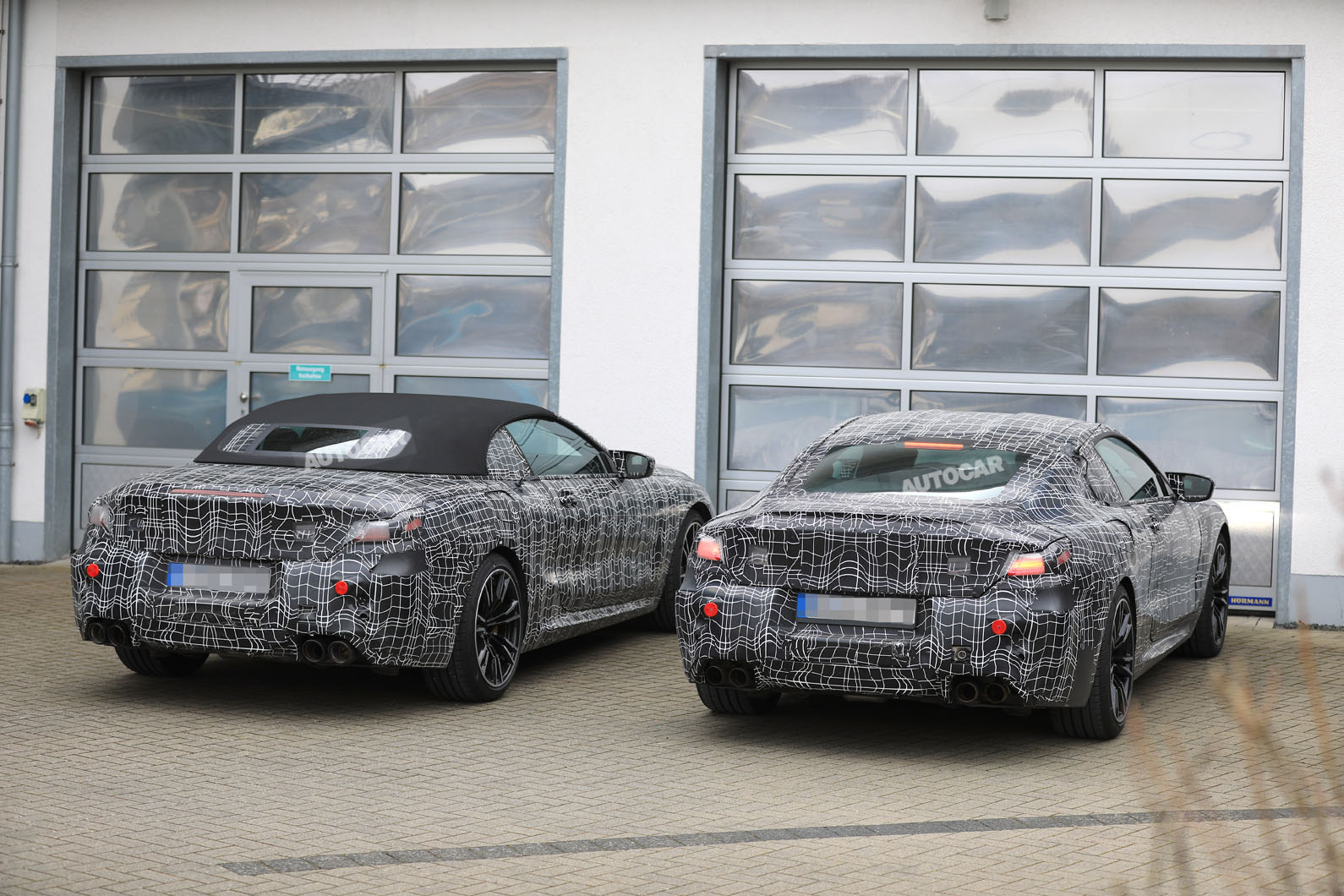 Building on the base of the new 8 Series range, which will appear on public roads in November, the M8 models will use BMW's twin-turbocharged 4.4-litre V8 engine. We know this because the racing M8 that competed in the Daytona 24 Hours earlier this year was equipped with this powerplant.

Without motorsport restrictors to worry about, the finished road car is expected to produce 600bhp, placing it above the latest 592bhp M5 and giving it more firepower than the Mercedes-AMG S63 Coupé, which has 577bhp.

M division president Frank van Meel revealed that development of the M8 was started at the same time as the regular 8 Series and that their programmes ran in parallel. He said the M8 builds "on the genes of the 8 Series and augments its DNA with added track ability and generous extra portions of dynamic sharpness, precision and agility".

Van Meel added: "It all flows into a driving experience that bears the familiar BMW M hallmarks and satisfies our customers’ most exacting requirements.” 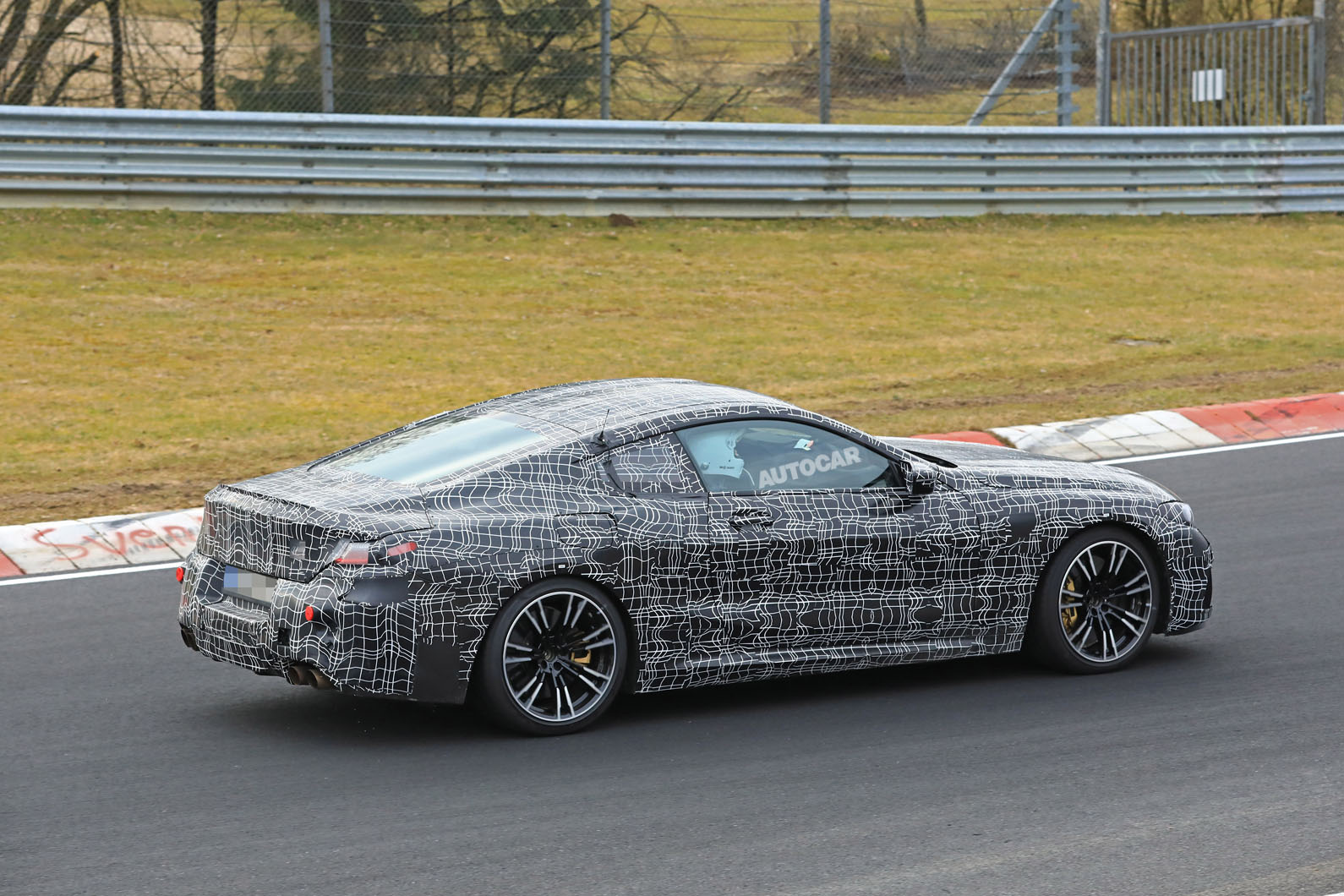 He said that BMW's engineers set out "to ensure that the standard car wasn’t too sporty for its customers" because the M division "wanted the M8 to feel like a proper step up".

"Also, because not all 8 Series customers want an M car," van Meel continued. 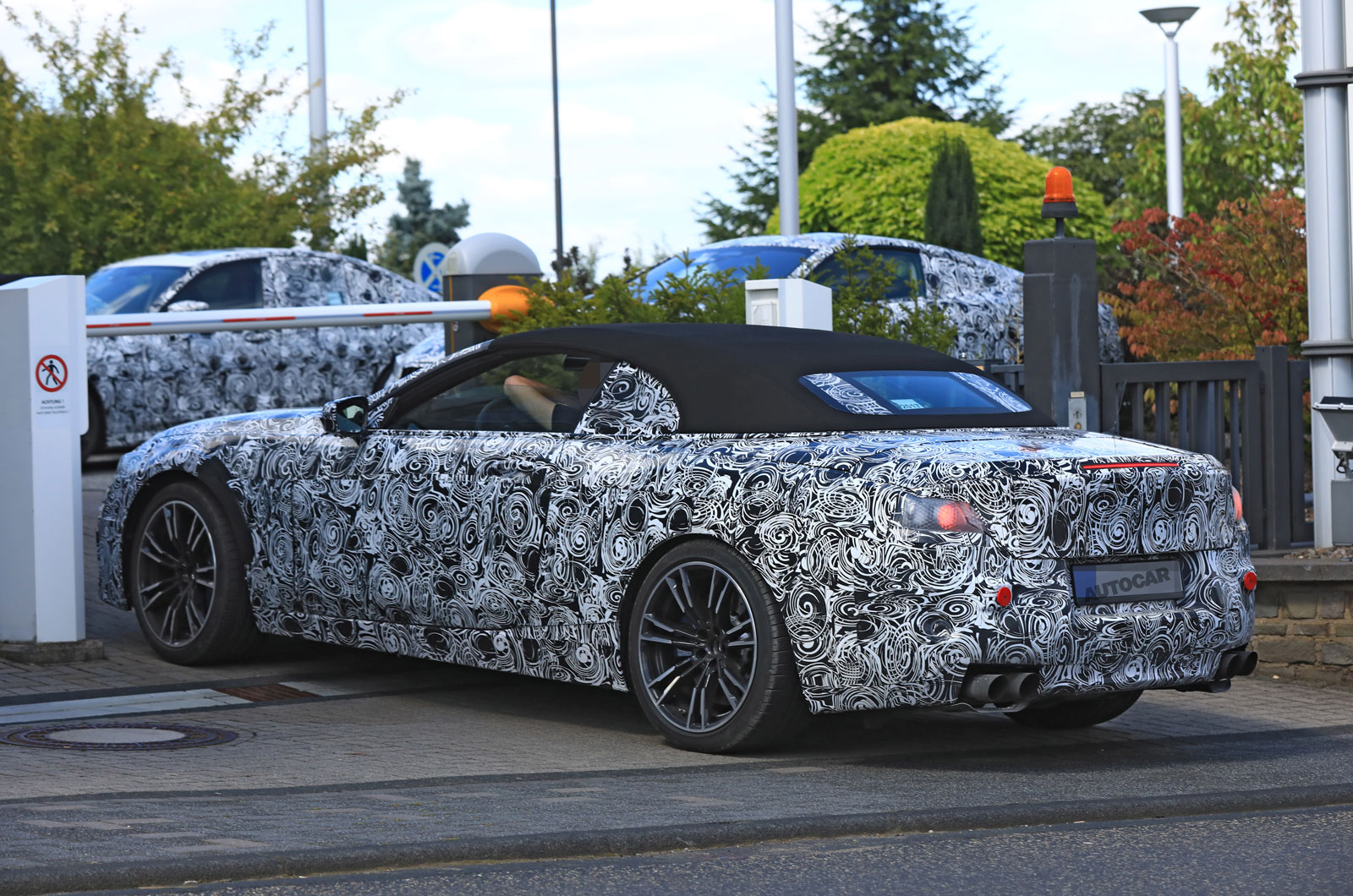 “We certainly want to make a statement with this car. It will sit at the very top of our model range and, for now, we have no confirmed plans for any series production model above it, so we understand it must have a specification suiting its position in our hierarchy.” 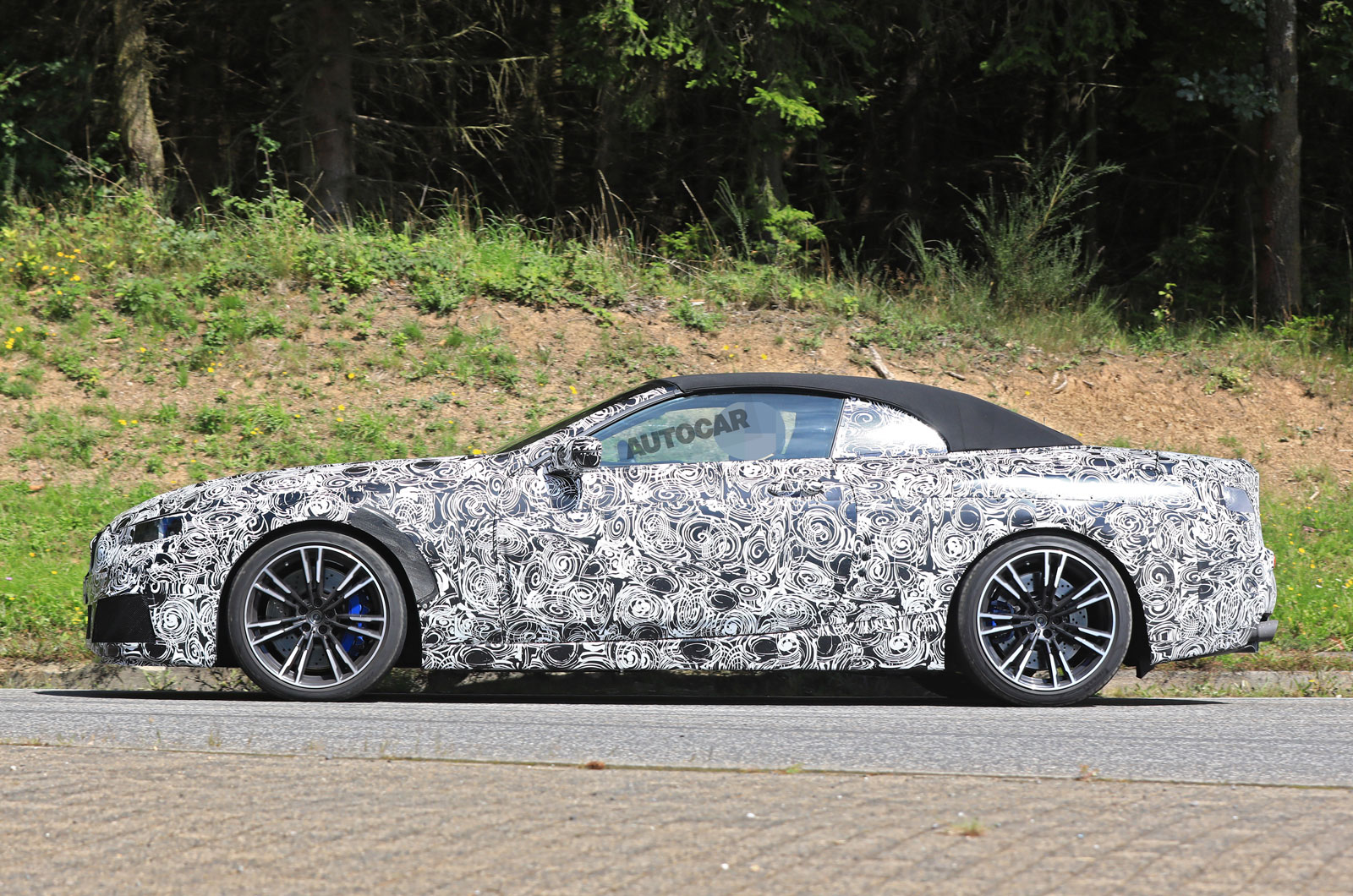 The M8 will carry a heavy premium over the standard 8 Series' £76,270 starting price, so a starting price surpassing that of even the i8 sports car is certain; the rival S63 Coupé kicks off at around £131,000.

Global project manager for the 8 Series, Sarah Lessmann, previously told Autocar: "There is a big gap [between the S-Class Coupé and the 911] and we decided the 8 Series shouldn’t quite be in the middle of those: it takes the best out of everything and defines its own gap. Performance-wise, we're close to the 911, but we also offer elegant and luxurious materials to match the best of the S-Class.” The Porsche 911 Turbo starts at £128,692.

BMW also used the M8 GTE, the racing version of the car, to compete as part of a factory effort in this year's Le Mans 24 Hours endurance race. It was the brand's first factory entry there in six years.

#BMWM M8 prototype out of hiding for its #n24 demo lap. And plenty of V8 exhaust crackle with it. Story live on https://t.co/YYso3R5iWu soon pic.twitter.com/hCGJjFpqwl

BMW to produce Mini Electric in China for domestic market

I know the obvious comparison is to the S Class coupe but are they really comparable.

One is a full 4 seater luxury continental crusher with huge refinement and first class GT credentials, thrown in AMG engines and they are not slow.

The other is a 2 plus 2 more sports car than GT but excellent cabin and I think it looks great but I don't see it as a rival to the S Class Coupe. The styling is fab and I'm sure around a track it will show a clean pair of heels to the S Class.

I think BMW will undermine themselves with the competition variant though, why announce the M8 as the flagship when if timeline follows the M5 a faster version is a couple of months behind as it seems here. The difference between the 2 will be 10k ish so why would buy an M8 at all

Grandma had a Corona Liftback

Who knew she was an 'opinion maker'?