The BMW M5 Competition is the new extra-powerful, sharpened and honed version of the M Division’s already pretty powerful and sharp M5 super-saloon. We drove it in the summer on Portuguese roads; now's our chance to find out how well it takes to British ones.

This car is a result of BMW M’s decision to spin off at least one added-performance ‘special standalone model’ from every M car it makes from now on. That standalone model might be branded Competition, like this one, or it might be a CS, a GTS or possibly even something all-new. The suspense is unbearable, isn’t it? Whatever they’re called, there has been plenty already in what seems like a short space of time, and, quite clearly, there will be plenty more.

The clever bit is that, by committing to making them as a matter of course, BMW M evades much of the cynicism you might otherwise confer on it for milking yet more money out of the early adopters who always rush to buy one of the first examples of any M car on the market. If you want the ultimate M2, M4, M5 or M8, you’ve now been put on notice that it almost certainly won’t be one of the very first ones in the showroom.

And if you choose to buy an early car anyway, run it for a year and then chop it in for the new and improved Competition version? Well, more fool you. Some would simply call that effective product lifecycle management. 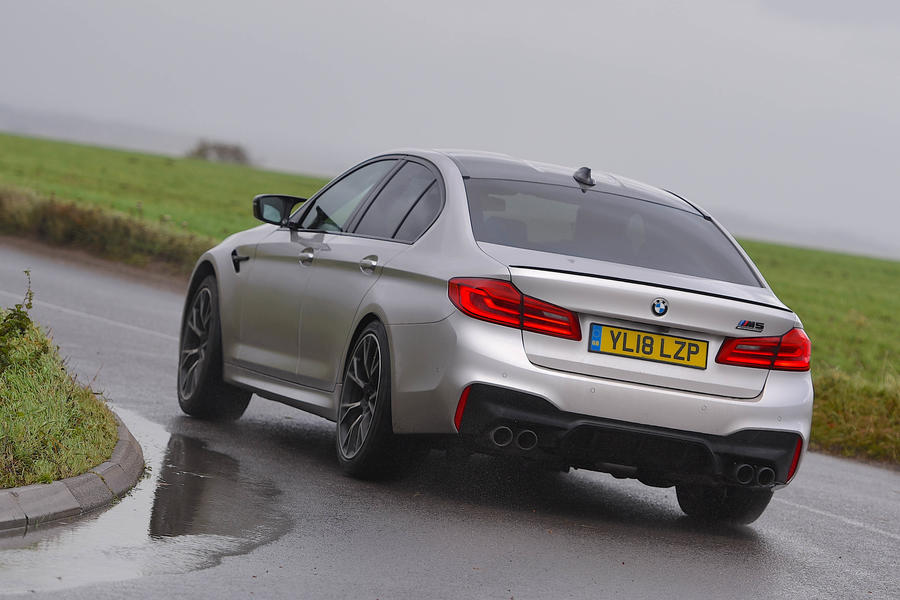 There is, at least, a reasonable amount that separates the M5 Competition from the regular M5 in terms of mechanical make-up, and pleasingly, this isn’t just an engine ECU reflash, a dampers software update and a bootlid badge.

The Competition gets lowered and stiffened suspension springs all round, as well as shorter auxiliary (or helper) springs and retuned adaptive dampers. Other suspension hardware changes include ball-jointed rigid rear suspension mountings, new front anti-roll bar mountings and a revised geometry up front that increases negative wheel camber. You get a 20in forged alloy wheel as standard (up from 19in on the regular M5), but there’s no super-sticky ‘cup’ tyre here and no free upgrade to carbon-ceramic brakes.

Under the bonnet, the Competition overhaul endows the M5 with 616bhp, up from 591bhp, but no more torque (553lb ft) – at least not nominally. Compare the power and torque curves of the two cars and you’ll note they’re identical up to 5500rpm. Just at the point at which the regular M5’s power curve is reigned in and made to flatline between 5600 and 6700rpm, the Competition’s is allowed to keep rising to a true 6000rpm peak on the likes of which, had they found something similar at the top of Everest in 1953, even Hillary and Tenzing might have struggled to stand for that famous photograph.

The freedom to rev that bit harder also means the M5 Competition’s V8 makes peak torque for 200rpm longer than the regular M5. But that, too, seems a bit ‘so what?’ given that the 627lb ft of wallop you get from the Mercedes-AMG E63 S remains such a distant prospect. You do get more rigid engine mounts if you opt for the M5 Competition, though, which not only improve throttle response, BMW claims, but also deliver enhanced steering response by virtue of stiffening up the car’s frontal structure.

So, when you account for everything you’re getting, the M5 Competition is probably not such a bad deal at all for the £6500 premium that BMW asks over a regular M5. And yet BMW UK only expects about one in three M5 owners to plump for it. And if you’re wondering why that might be, it won’t take you long in the driver’s seat to find the answer.

There's plenty of uncompromising focus about the M5 Competition’s ride, which, although comfortable enough on good surfaces, gets quite tetchy and firm, and occasionally hyperactive, on uneven cross-country roads. The car’s adaptive dampers have the familiar Comfort, Sport and Sport+ modes, and all but the firmest of those keeps the ride civil on smooth motorways and fast A-roads. But even Comfort struggles to cope with the topography of a British B-road, where the M5 Competition seems notably short on wheel travel and manages its bodily mass quite abruptly and aggressively over medium-sized intrusions.

Elsewhere, though, there’s a lot more to like about the M5 Competition’s dynamic makeover. Much as you might say that the regular M5 wasn’t in need of either, there’s even quicker steering response and more instant agility about the car’s handling around tighter bends, junctions and roundabouts. And because it comes hand-in-hand with a weightier and more tactile steering rim, that’s a change that seems intuitive and is easy to assimilate.

The car’s configurable all-paw driveline still has more influence over how it corners than anything else in its make-up. Set it to default 4WD mode and the M5 Competition feels quite stable and surefooted, with lots of traction. 4WD Sport mode partnered with M Dynamic mode on the electronic stability control makes the car feel more rear-driven, giving you plenty of opportunity to steer using your right foot in longer, lower-speed corners and standing ready to shift torque forwards as and when it thinks helpful. And 2WD mode with the electronics completely off gives you as lurid a drift machine as ever you could want. The choice is yours, sir. Welcome to the veritable smorgasbord that is the modern super-saloon driving experience.

That was all true of the regular M5, and so it is of the M5 Competition, except that the extra handling agility the Competition’s tweaked suspension grants makes the sportier driveline modes feel even more clearly defined from the default than ever they do in the regular M5. On smooth surfaces, the M5 Competition wants to swivel really keenly underneath you when you set it just so, even before you’ve switched out the front driveshafts completely. And in a wide lane at big speed, the sense of precision and the connected feel it delivers is quite special. 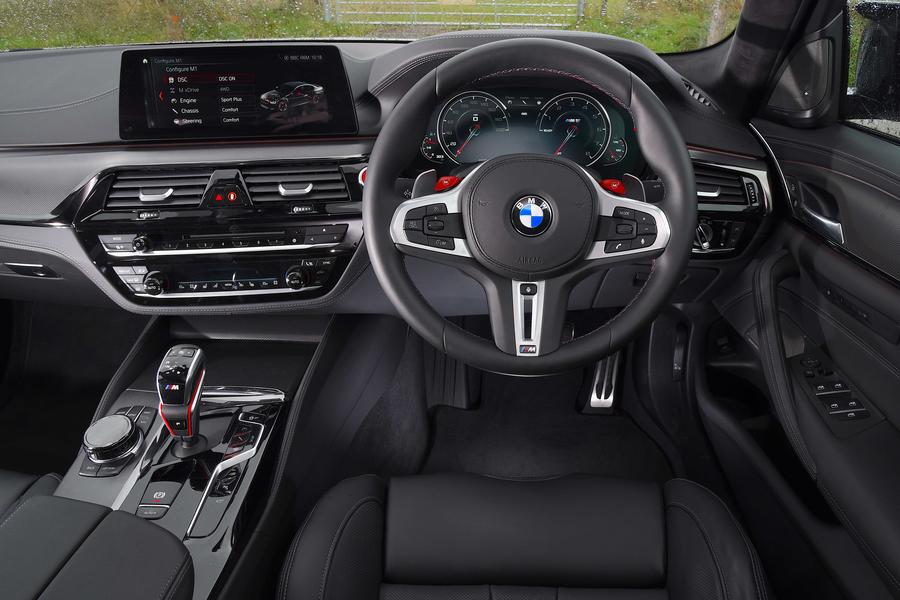 If the additional straight-line performance would be the main draw, I’m not so sure. The big-hitting E63 S remains the defining sledgehammer thrust-monger in the current super-saloon niche, and an extra 25bhp for the Competition version of the M5 doesn’t change that, much as the BMW is also the polar opposite of slow and boring.

But if you’re attracted by the idea of even sharper, more pointy and more lively handling from the M5, and the best impression that such a large, four-wheel drive executive saloon can possibly do of a spry two-seater sports car, fill your boots.

At its best, the M5 Competition certainly eclipses the regular M5’s already remarkable high standards on handling poise and driver engagement. However, what it gains in those terms isn’t quite worth what it surrenders compared with the standard M5 as regards ride suppleness and general suitability to the full gamut of road surfaces on which you might drive it in the UK.

Less may well be more when it comes to M5 ownership – particularly since it's only 25bhp less. 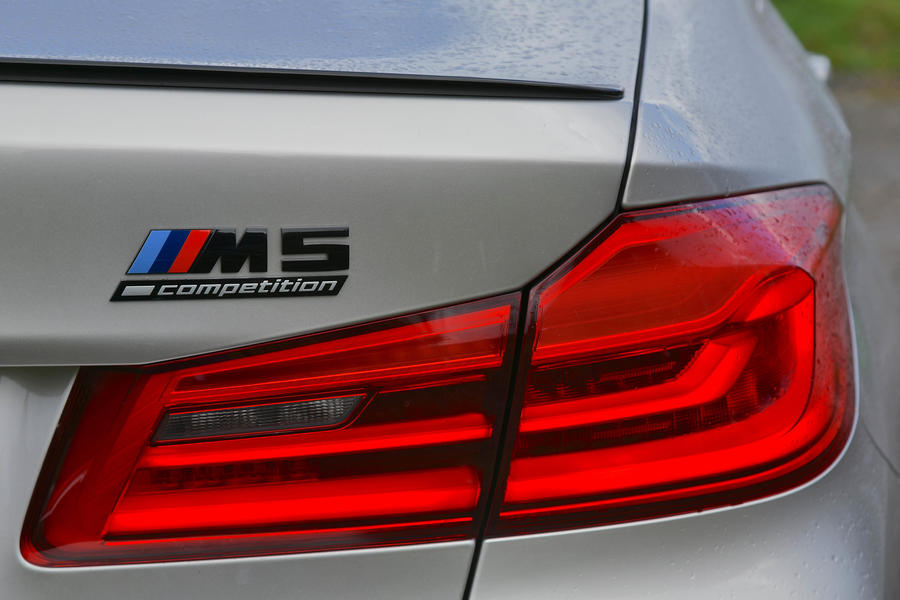 Thank you for taking the time to listen.   Spread the word!

Far too many problems.

Far too many problems.

You had some problems with a BMW?

You had some problems with a BMW?

Sadly, yes.   When it was running it was superb.   I enjoyed it.   But they're just too fragile.

Finally when the garage told me they wanted to replace all the coils and the high pressure fuel pump again I pulled the rip cord.   Wanted to trade it in for a replacement but the BMW garage wouldn't give me a decent valuation because "who knows how much it would cost to fix".   Even BMW don't have any idea!

Then I thought I'd be crazy to buy another after the amount of times it's actually been in getting fixed!

Why do more rigid engine

7 November 2018
Why do more rigid engine mounts cost anything?

If they are a good thing, why wouldn't they be rigid in the first place?

I don't sense the author knows, or was inclined to ask.

Why do more rigid engine mounts cost anything? If they are a good thing, why wouldn't they be rigid in the first place? I don't sense the author knows, or was inclined to ask.

Agree, but today its all about providing daily content, and now its free to me, back in the day I had to pay every Wednesday morning at my local newsagents. Maybe this is the price we addicts should be willing to pay for our free daily fix?

I really hope that Autocar stays afloat and continues to offer us readers our daily bread. Yes, its not what it was back in the 1980's, but hey nor am I  according to ere indoors.