Full-on M version of BMW's range-topping 8 Series will be revealed next year, and we've had a ride in the first prototype
Open gallery
Close

Rivalling the likes of the Bentley Continental GT at a price of around £120,000 in the UK, the new four-wheel drive model has now entered a final phase development ahead of a planned public debut at the Frankfurt motor show next September.

Set to crown the newly-resurrected 8-Series line-up, the M8 will be sold with the choice of three different bodystyles. The first to reach UK showrooms will be the M8 coupe, pictured here testing at the Estoril circuit in Portugal earlier this month. It will be followed by the M8 convertible that is set for launch during the latter half of 2019, with a four-door M8 GranCoupe also confirmed for launch during the first half of 2020.

The M8 is powered by the same V8 petrol engine as the M5, and as with its four-door sibling, the longitudinally mounted twin-turbocharged 4.4-litre unit is planned to be offered in two different states of tune. 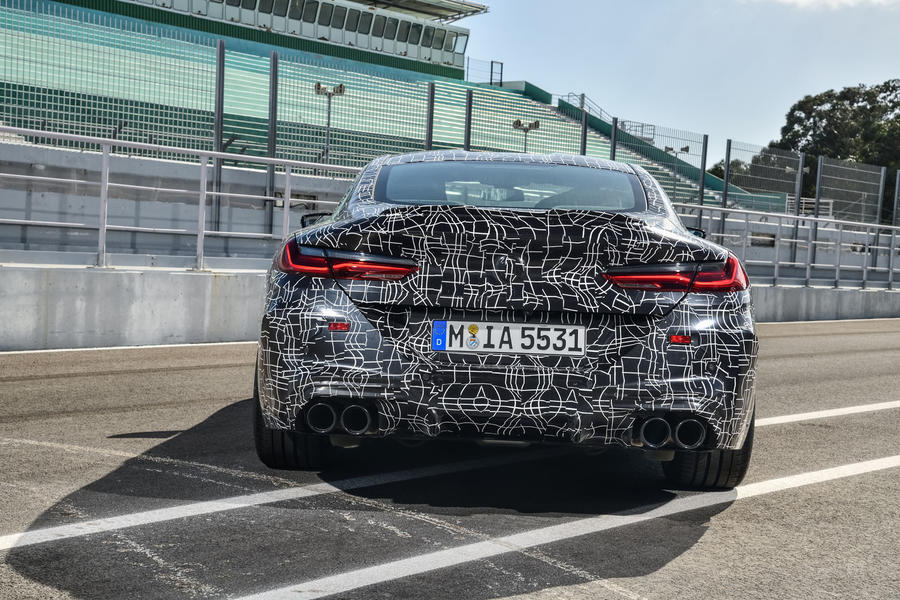 In standard M8 guise, the 90-degree engine will be tuned to deliver more than 600bhp, according to BMW M development boss Dirk Häcker. Although not yet confirmed, a more powerful M8 Competition is also planned, offering up to 650bhp through various tweaks to its induction system.

BMW has not divulged any official performance figures, but Häcker suggests the M8 will significantly undercut the current flagship M850i xDrive’s claimed 0-62mph time of 3.7sec. Combined fuel economy is put at 26.4mpg at this stage in the development process.

In a move mirroring that of the latest M5 and M850i xDrive, the M8 receives a standard eight-speed torque converter automatic gearbox as well as a variable four-wheel drive system and electronically controlled M-differential at the rear. A so-called M Dynamic mode allows the driver to activate a rear-wheel drive mode, too.

Similarly, the suspension is a development of the double wishbone and multi-link system used by the M5. However, the M8 boasts a shorter wheelbase and wider tracks than its sedan sibling. Additional body stiffening increases its rigidity over the M850i. 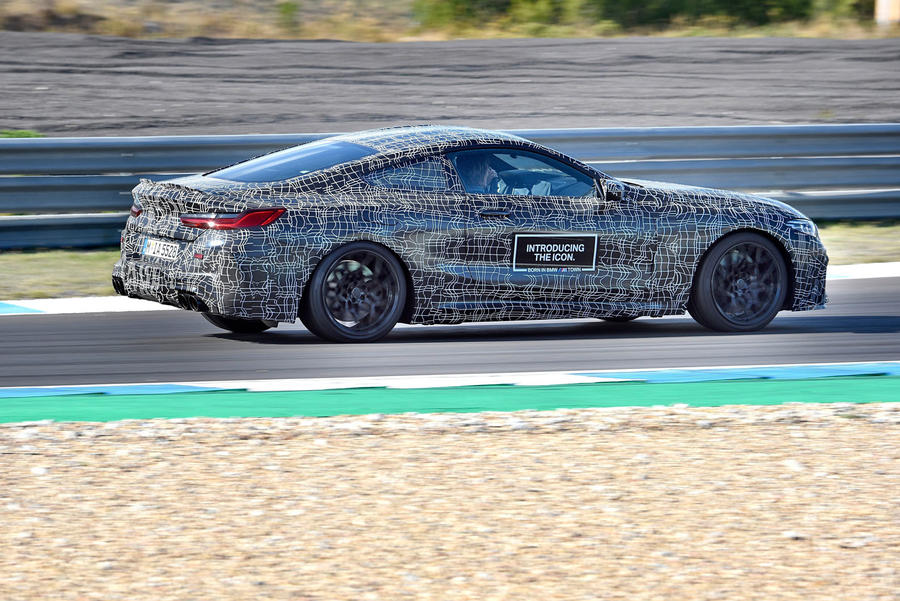 Häcker confirms the new two-door receives its own specific suspension tuning, revised springs, dampers, bushes and roll bars. “It corners very flat and with very little movement. You sit a lot lower than in the M5, so it feels quite a bit different to drive,” says the BMW development boss.

Häcker also confirms the new M8’s centre of gravity is significantly lower than that of the M5, and it boasts a perfect 50:50 weight distribution, in part through the adoption of a lighter lithium-ion battery.

Despite the focus on dynamics, BMW M is confident the M8 will also successfully fulfil the role of long-distance grand tourer. “It’s quite firm in sport, but the inclusion of adaptive damping control means we can offer customers greater compliance with a comfort mode as well” Häcker claims.

There are certain laws of physics that suggest you should never describe a car approaching two tonnes as being truly agile. But within minutes of arriving at Portugal’s Estoril circuit for a passenger ride in a prototype M8 coupe, Dirk Häcker sets about doing just that.

As we stand in the wind swept pit lane, the head of research and development at BMW’s M performance car division takes little time in suggesting the M8 is far and away a more driver orientated proposition than its indirect predecessor, the M6.

“We’re absolutely convinced, and not just about its performance, which is a whole new level for us. In terms of agility, it is every bit as good, if not better, than the competition. Even with four-wheel drive, we’ve been able to program it to deliver traditional rear-wheel drive traits when the driver wishes,” he says.

Häcker, who has presided over the engineering of all recent M models, indicates a lot of effort has been focused on providing the M8 Coupe with even greater response and sharpness than the M5, with which it shares its mechanicals.

“We’ve done a lot of detailed tuning to the steering, springs, dampers and bushing. The individual components are much the same, but they are set up differently” he enthuses. 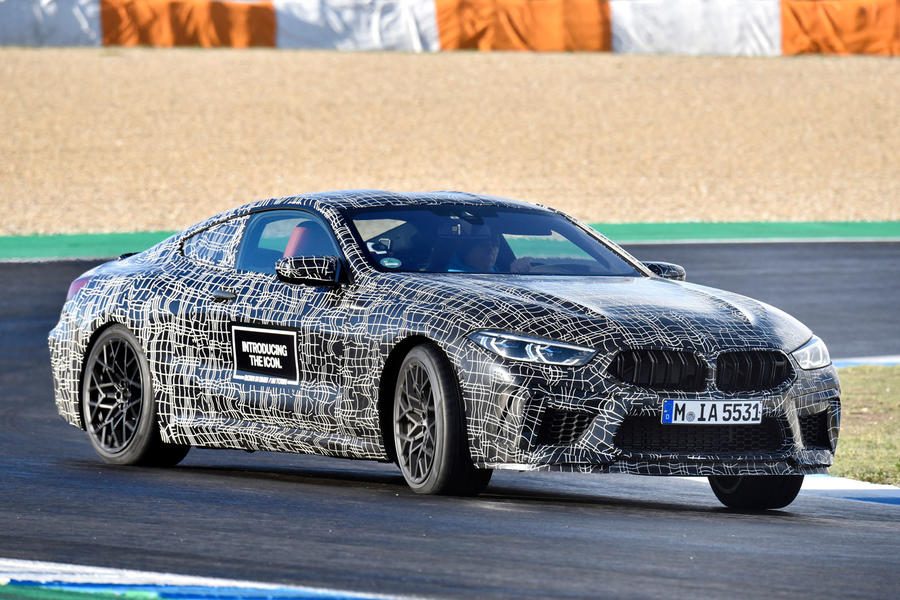 As the camouflaged prototype arrives in a blaze of exhaust noise, it is clear some of the uniqueness Häcker talks about is down its exterior design, certain elements of which take their cue from the M8 GTE race car campaigned by BMW Motorsport in the World Endurance Championship.

What followed over the next three laps of the former F1 circuit was a mostly sideways display of what that reduction in the centre of gravity means. While it is never easy forming binding conclusions from a brief run in the passenger seat, Häcker’s enthusiasm for the dynamic qualities of the M8 Coupe certainly appears justified.

There was never really any doubt about the accelerative qualities of the M8 Coupe; with over 600bhp and four-wheel drive translating to a 0-62mph time under the 3.4sec of the standard M5, as well as a top speed in excess of the benchmark 186mph.

No, the real question hanging over the M8 Coupe up until now has been its ability to match this speed with the sort of handling enthusiasts will cherish. However, after witnessing its outstanding body control, ability to change direction with all the deft precision of much smaller and lighter car and ease at which it can be coaxed in lurid oversteer it is clear it is not just another high priced grand tourer seeking to be regarded as a sports car but - and feel free to take this with a grain of salt at this stage - a true sportscar in its very own right.

Like that of the M5, the M8 Coupe’s four-wheel drive system is programmed to send up to 100 per cent of drive to the rear wheels in M Dynamic mode. There’s also a torque vectoring function built into the rear differential to apportion that drive to the wheel with the most grip. The result is car that provides all the security of a four-wheel drive car when you want it and, at the press of a button, all the tail-happy traits of a powerful rear-wheel drive sportscar when the conditions allow.

Right now it appears to offer an even broader range of dynamic traits than even the M5. The proof, of course, will have to wait until we get to drive the M8 Coupe for ourselves next year. But for now, the early signs are certainly encouraging, even if a quick physics lesson suggests they shouldn’t be.

BMW: The 8 Series is a proper sports car

Agility on the track is by no

Exactly, it is just too big for normal roads. This is an even fatter and dubious looking version of the M5. It is pretty awful really despite the extreme performance. They may as well jack the suspension up and chop off the roof and call the resulting 2 tonne off road drop top a new concept in off roading performance convertible SUV's.

...to my eyes. And at that price I'd take a smite less power and a heap more class and knock on Bentley's door.