BACK TO ALL NEWS
Currently reading: Volkswagen T-Roc order books open with prices starting at £20,425
UP NEXT
New Lotus electric sports car to use Britishvolt batteries

Volkswagen has opened order books for its new T-Roc SUV, with prices starting at £20,425 and first deliveries due in December.

The T-Roc aims to rival a wide number of junior SUVs in a price range that will see it compete with the Renault Captur at the lower end, the Nissan Qashqai in the middle and the Mercedes-Benz GLA at the upper end in one of Europe's fastest-growing car segments.

The T-Roc is the latest VW model to be based on the company’s highly versatile MQB platform. It employs a MacPherson strut front and, depending on the engine and drive system, either a torsion beam or multi-link rear suspension in combination with an optional adaptive damper system.

Stylistically, the new SUV leans heavily on the earlier concept by the same name, with an exterior styled to emphasise its dual on and off-road character. VW boss Herbert Diess said at the car's reveal that the new T-Roc would be "the new agility benchmark" in the class. 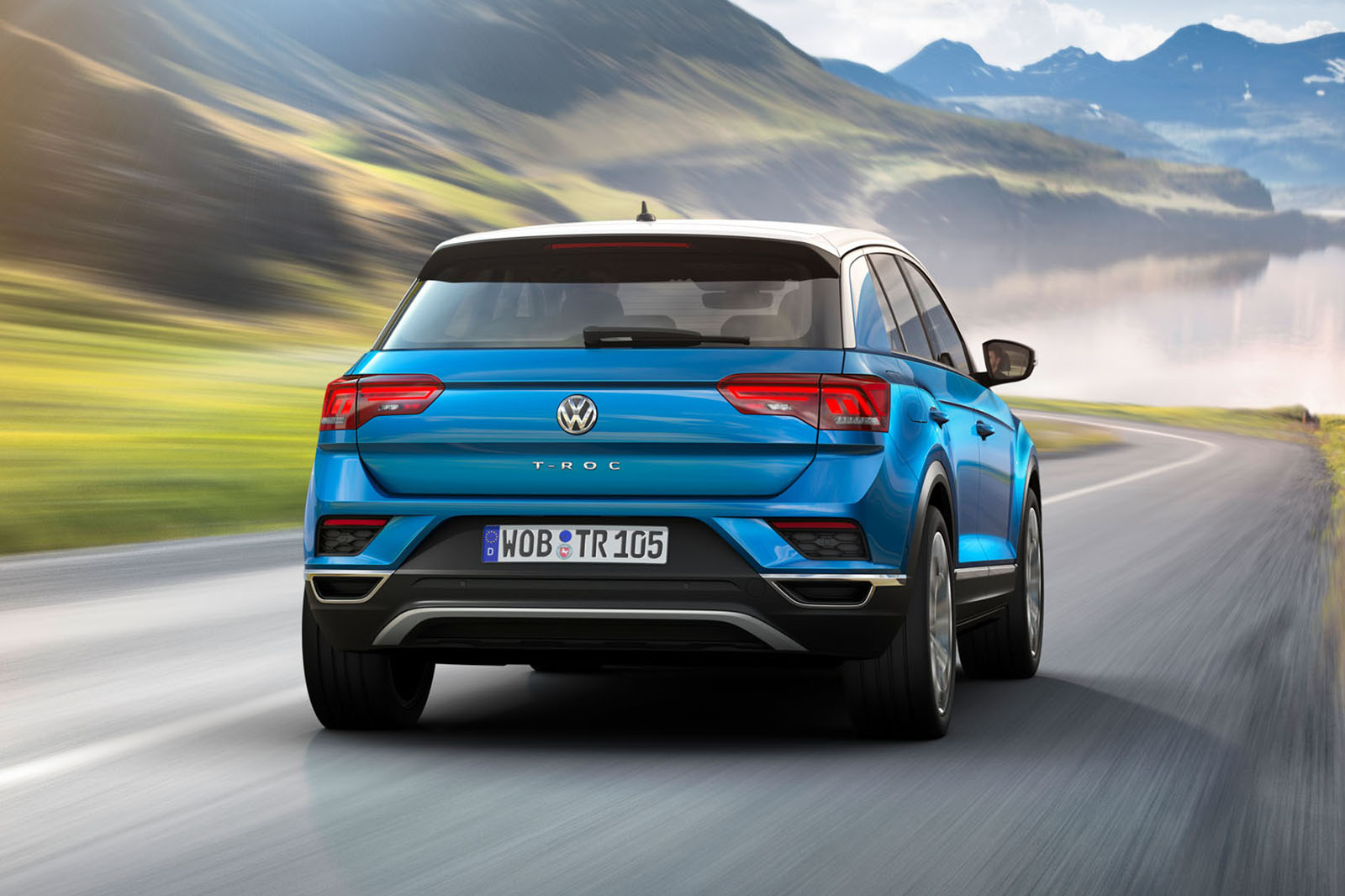 Among the key design cues is a new interpretation of the classically simple VW grille. It is bookmarked by relatively thin headlights that wrap around the front fenders to give the front end a highly tapered appearance. The thin profile of the headlights has been made possible by a decision to house the LED daytime running lights and cornering lights lower down within the front bumper, which also receives a prominent trapezoidal-shaped cooling duct and silver-coloured kick plate within the lower section. The daytime running lights serve as indicators, switching to an orange hue when the turn signals are in operation.

Further back, the sides are dominated by relatively large wheelhouses flanked by heavily structured wheel arches. Other distinguishing styling features include a swage line that runs back above the door handles to form a defined shoulder line, a chrome trim element extending from the A-pillar over the entire side of the roof before ending at the base of the wide C-pillars and, as an option, a two-tone paint scheme in which the roof section, including the A-pillars and exterior mirror housings, boast a contrasting colour to the rest of the T-Roc’s five-door steel body.

Three specifications are planned: standard, style and sport. At 4234mm in length, 1819mm in width and 1573mm in height, the T-Roc is 252mm shorter, 11mm wider and, due to its more road-car-like ground clearance, a considerable 131mm lower than the second-generation Tiguan. Although the two VW models share the same 2603mm wheelbase, their track widths differ: the T-Roc’s front and rear tracks are 24mm and 31mm shorter than those of the Tiguan at 1546mm and 1572mm respectively. 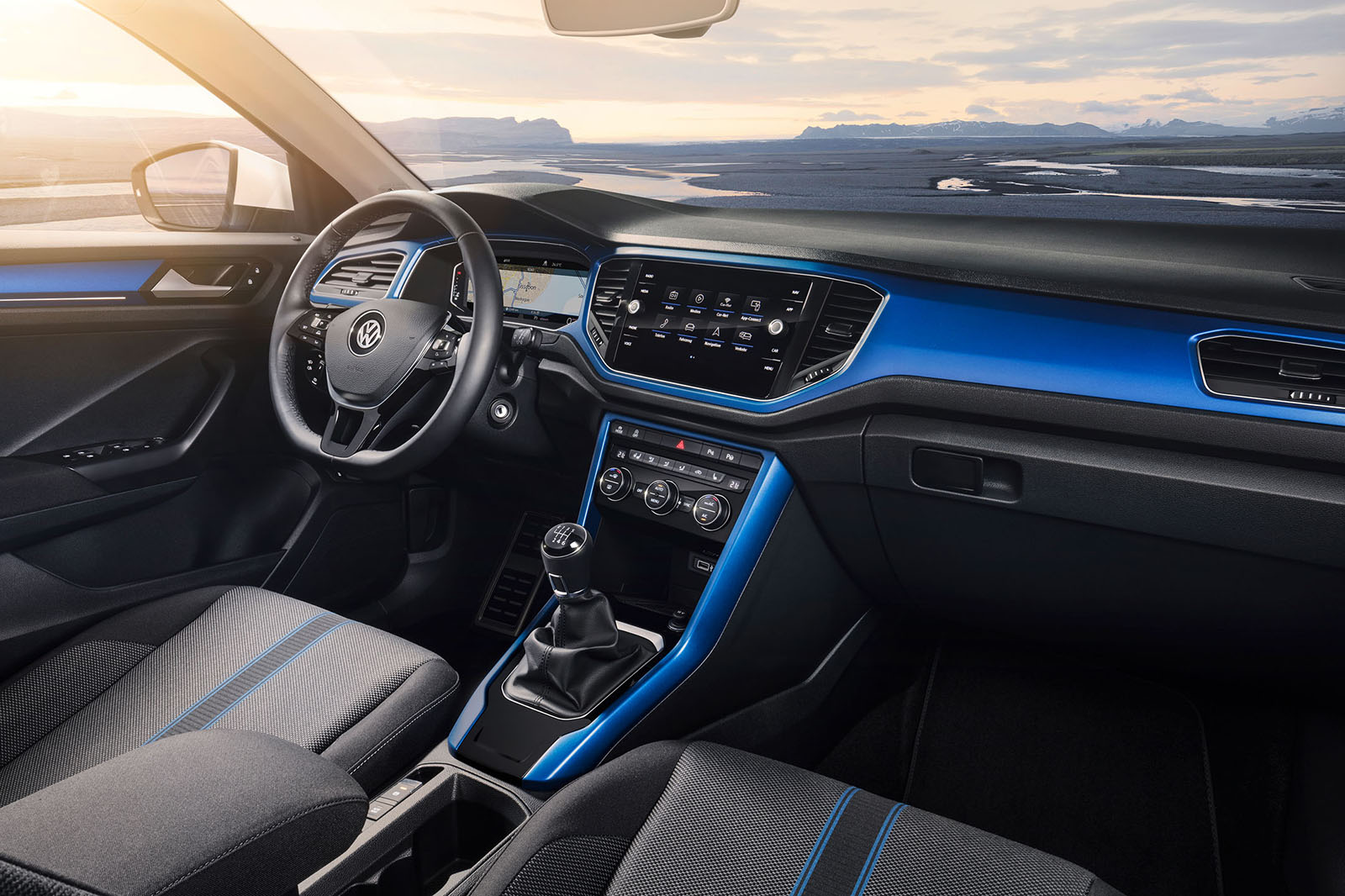 Inside, the T-Roc boasts a dashboard similar in style to that already used by the Golf Sportsvan, but with additional body-coloured trim elements to liven its appearance. The controls have also been brought over from other recently launched Volkswagen models, giving the new SUV an instantly familiar cabin appearance.

The added body height in comparison with the Golf has enabled VW to provide the T-Roc with an elevated SUV-like seating position; the front seats are mounted 572mm above the road, while the rear seats are set at a height of 618mm. Nominal boot capacity is put at 445 litres, which is 65 litres more than that offered by the Golf but a significant 170 litres shy of the Tiguan. With the standard 60/40 configured rear seat folded, capacity extends to 1290 litres.

The list of optional equipment is extensive. Included are the latest version of VW’s 11.3in active info display digital instrument pack, an 8.0in touchscreen infotainment display supporting a so-called 'app connect' function for integration with Android Auto, Apple CarPlay and MirrorLink, an inductive smartphone charge plate and a 300W, eight-channel Bose sound system.

In a bid to provide broad appeal, the T-Roc will be sold with a choice of five turbocharged engines, comprising three petrol units and two diesels. Depending on the model, buyers get to choose between a six-speed manual or seven-speed dual-shift automatic gearbox, and either front or 4Motion four-wheel drive.

Among the petrol engines is a 1.0-litre three-cylinder unit developing 115bhp and 200lb ft in the entry level 1.0 TSI. Above that is the 1.5 TSI, which receives VW’s newly introduced 1.5-litre four-cylinder engine with 150bhp and 250lb ft. The initial performance leader within the new T-Roc line-up, though, is the 2.0 TSI. It runs the latest variant of Wolfsburg’s 2.0-litre four-cylinder petrol engine delivering 190bhp and 320lb ft of torque.

A total of four models come with a six-speed manual gearbox and front-wheel drive as standard. The 2.0 TSI and the more powerful version of the 2.0 TDI come exclusively with a seven-speed ducal shift gearbox and 4Motion four-wheel drive – a combination that can also be ordered as an option on the 1.5 TSI and lower-powered 2.0 TDI. 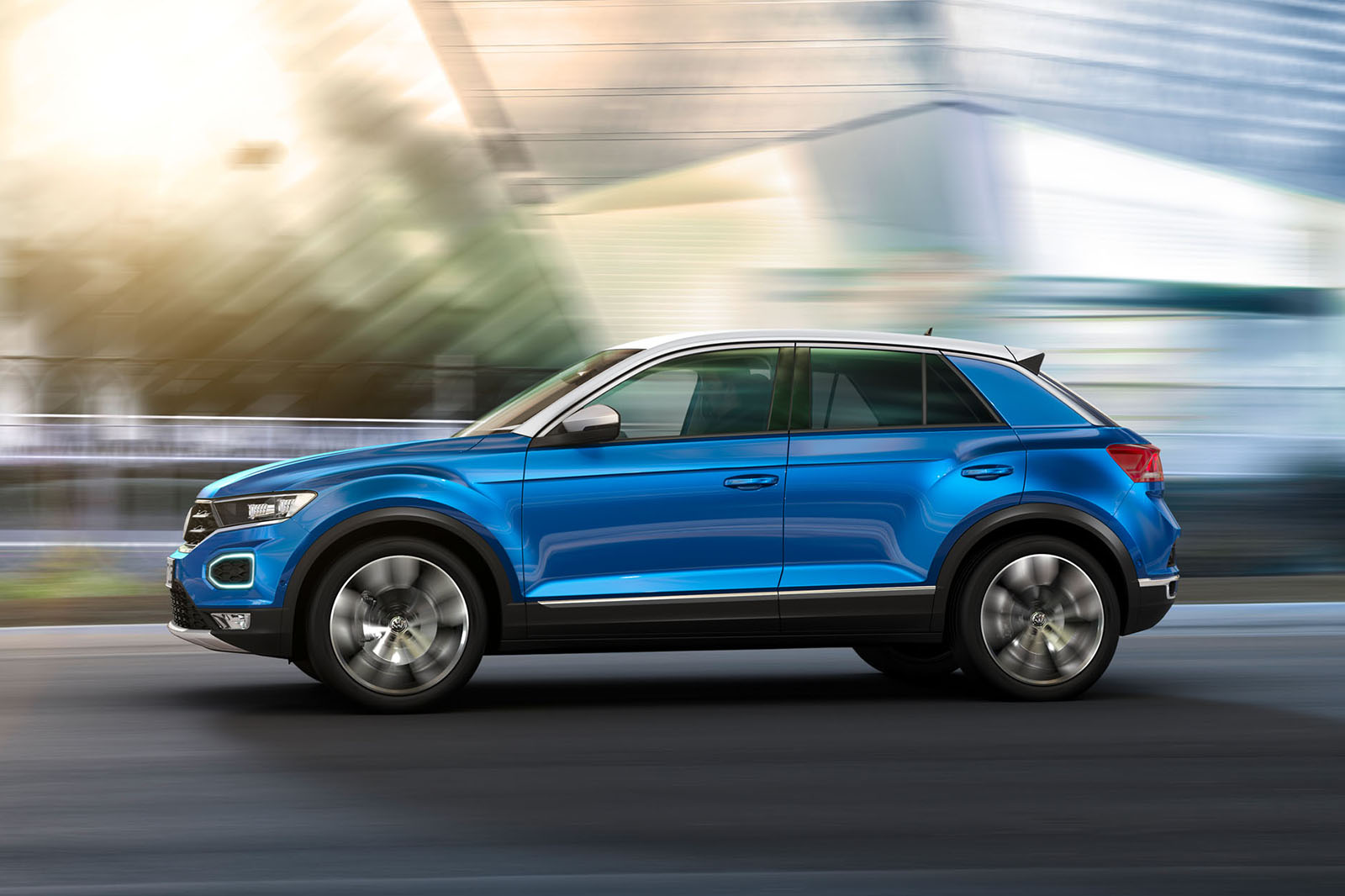 The T-Roc's arrival marks the start of a line-up transformation that will see a renewal of the full VW range by 2020.

The new high-riding, five-seat T-Roc slots into VW’s line-up beneath the Tiguan. One of two new VW SUV models planned for introduction by early 2019, the uniquely styled T-Roc was first previewed in concept car guise at the 2014 Geneva motor show.

It will be joined in early 2019 by a production version of the smaller VW T-Cross Breeze concept revealed at the 2016 Geneva motor show, according to Wolfsburg sources.

To me, the wheels in the final version are much too small - smaller than in all of those rendered images. This is disappointing because I think the design relies on big arch-filling wheels.

You may think me a fool.

But I know I'm cool.

What was that ? Sorry I fell

What was that ? Sorry I fell asleep