The Jaguar C-X75, Range Rover Sport SVR and Land Rover Defender used in the forthcoming James Bond film, Spectre, have been showcased in a special event in Frankfurt this evening.

Jaguar Land Rover Special Vehicle Operations, as well as Jaguar and Land Rover Design, worked with filmmakers on the conception and creation of the Bond cars.

Specially modified Land Rover Defenders and the fastest, most powerful Land Rover ever, the Range Rover Sport SVR can be seen in action sequences shot in Austria.

The Defenders were constructed by the JLR Special Operations division and fitted with huge 37-inch diameter off-road tyres and enhanced body protection to tackle the challenging terrain of the snow-covered mountain roads used as filming locations.

John Edwards, managing director of Jaguar Land Rover Special Operations, said: "For Jaguar Land Rover to once again be a part of the iconic vehicle line ups in one of the most celebrated film franchises in the world represents a proud moment for us.

"It’s an incredible opportunity to showcase production and concept cars alike and we look forward to continuing this relationship well into the future.”

Two stars of the film, Naomie Harris (Moneypenny) and David Bautista (Hinx), attended the event. The latter drives the C-X75 through Rome in a chase scene with Daniel Craig (James Bond) in the Aston Martin DB10.

Spectre is released in cinemas worldwide from October. 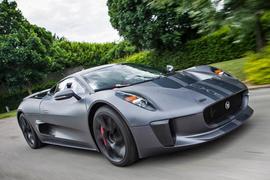