BACK TO ALL NEWS
Currently reading: 2018 Jaguar E-Pace officially revealed: release date, price and interior
UP NEXT
Are disabled people being left behind by electrification?

Hot on the heels of the F-Pace, the compact SUV will take on rivals such as the BMW X1 and Audi Q3
Open gallery
Close

These are the first official pictures of the new Jaguar E-Pace, which will go on sale later this year.

The second SUV to come from Jaguar in as many years will be followed by a third, the all-electric I-Pace, within months. 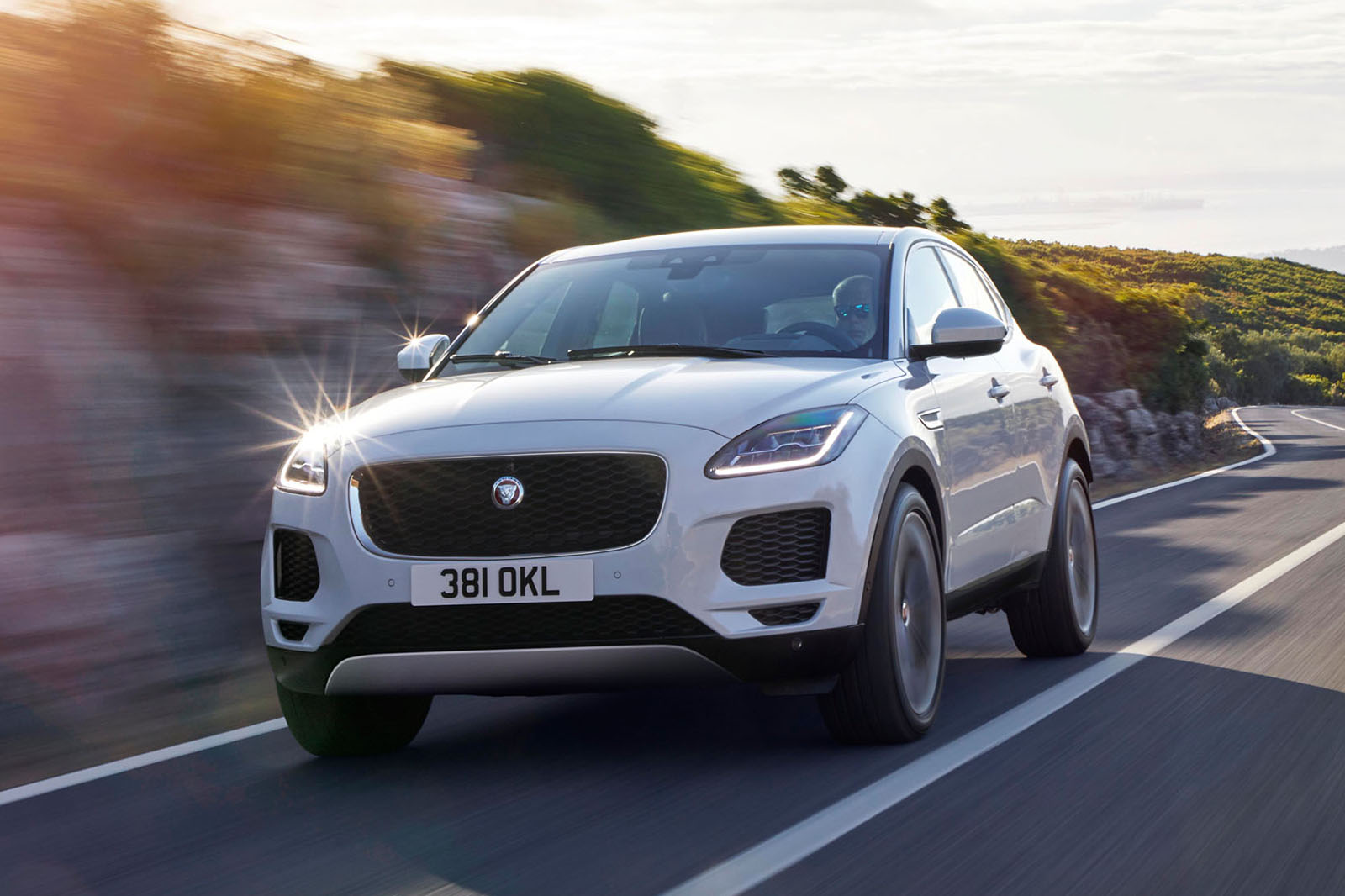 The small SUV is derived from the D8 architecture used to underpin the Land Rover Discovery Sport. However, updates to the on-road dynamics have created what Graham Wilkins, the E-Pace’s chief engineer, describes as a “Jaguar version” of the Discovery Sport.

The five-door, five-seater will be built under licence by Magna Steyr in Austria, rather than alongside the other transverse-engined cars in the Jaguar Land Rover range: the Discovery Sport and its Range Rover Evoque sibling.

The plant at Halewood that builds the Land Rover pair is at capacity, with no room  to produce the expected six-figure annual production run of the E-Pace. 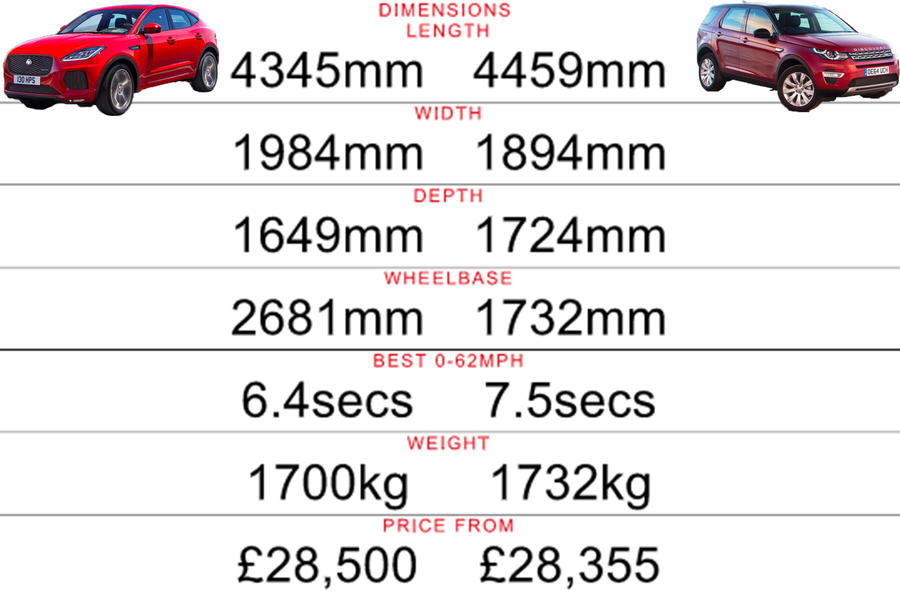 Magna will bring back a steel-bodied, transversed-engined, front-wheel-drive Jaguar to the range for the first time since the X-Type.

Front-wheel drive will only be offered on the entry-level 148bhp 2.0-litre diesel model with a six-speed manual gearbox, however. The rest of the range will come with all-wheel drive and a nine-speed automatic gearbox.

An all-wheel-drive version of the 148bhp diesel will be the only other model offered with a manual ’box.

“The front-wheel drive model is still fun to drive, as the access model to the car and the Jaguar brand,” said Wilkins. 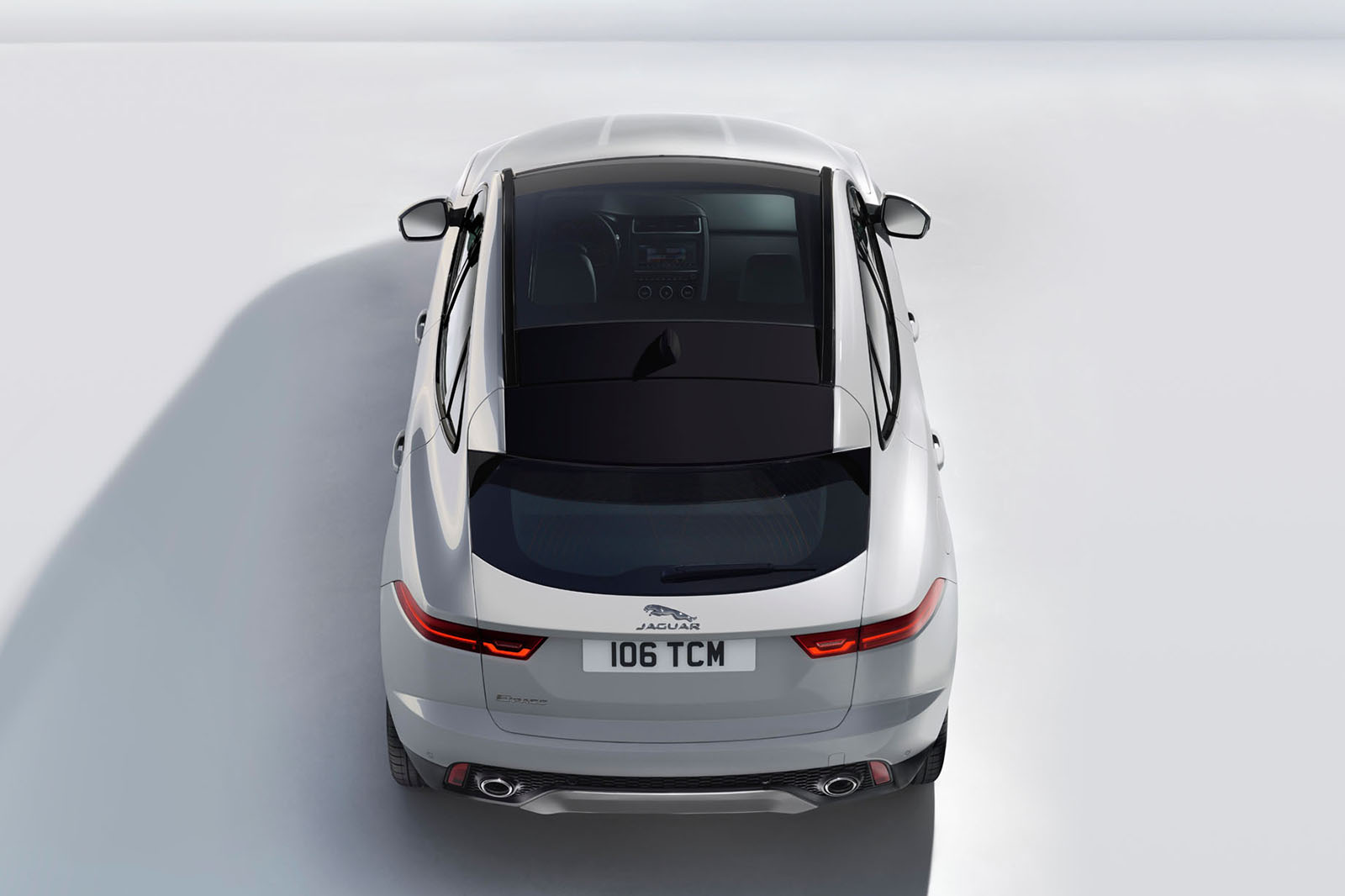 Jaguar Land Rover’s full range of turbocharged four-cylinder petrol and diesel Ingenium engines will be offered in the E-Pace, including a range-topping 296bhp 2.0-litre petrol version. This engine helps propel the E-Pace from 0-60mph in 5.9 seconds and to a top speed of 151mph.

Audi’s 362bhp RS Q3 Performance is the most potent in a class of cars generally not focused on dynamic ability. Although the top E-Pace does not match those outputs, Jaguar is talking up the dynamic ability of the range as a whole.

Wilkins said that being natively front-wheel drive was no barrier to the E-Pace handling how Jaguar thinks its cars should. “If we do a car like this, it needs to drive how it looks,” he said. 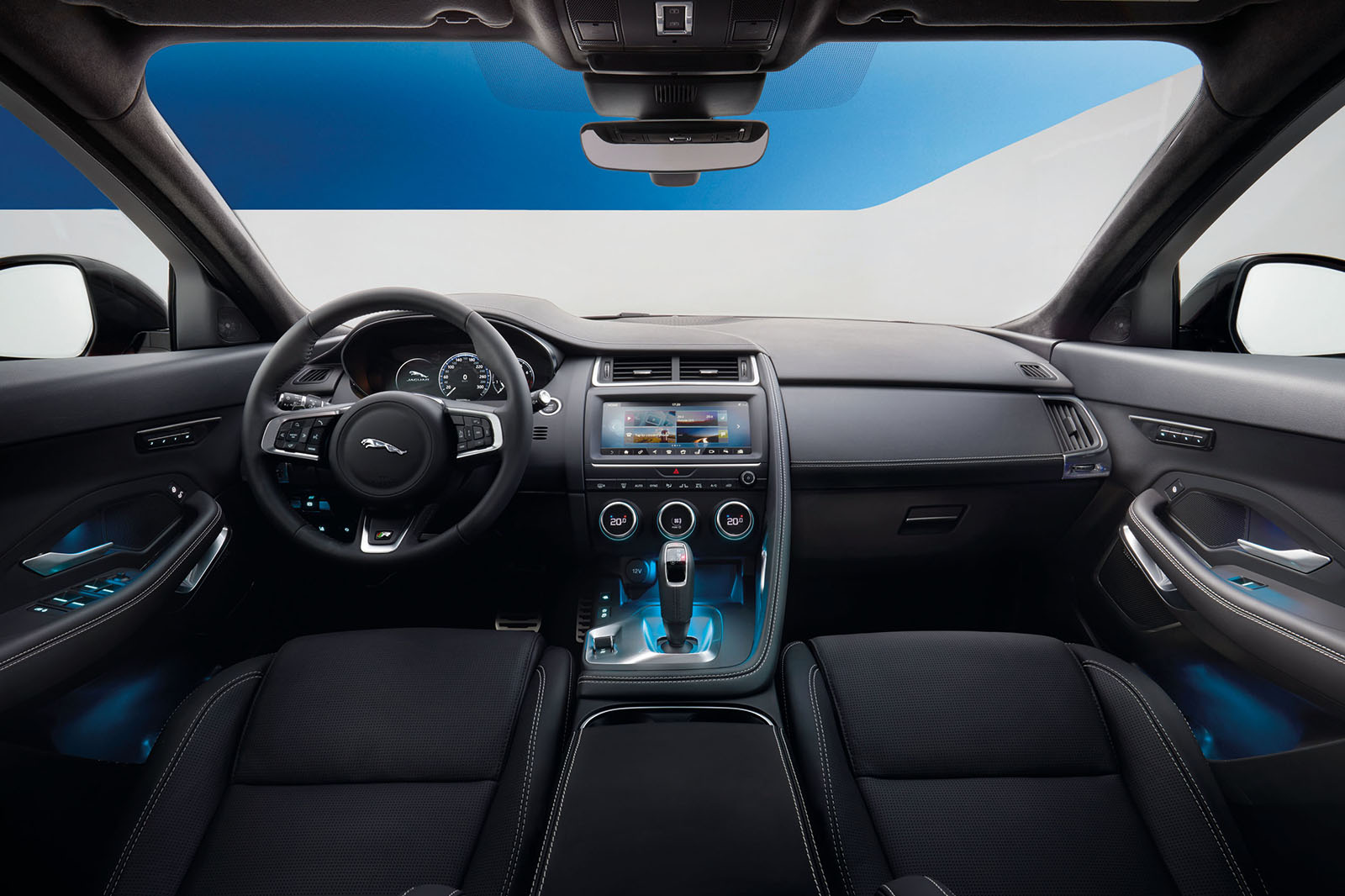 “We needed no excuses. We chose an architecture that could do the looks and the drive with all the changes we’ve made, and there’s a 300PS [296bhp] petrol version. There’s no excuse.”

The E-Pace has MacPherson strut front and multi-link rear suspension, and Jaguar has tuned the chassis, along with the four-wheel-drive control system and Adaptive Dynamics dampers, for a sporty on-road drive. To that end, the camber has also been changed on the front axle and there is a semi-solid mounting for the front sub-frame for a more connected steering feel. 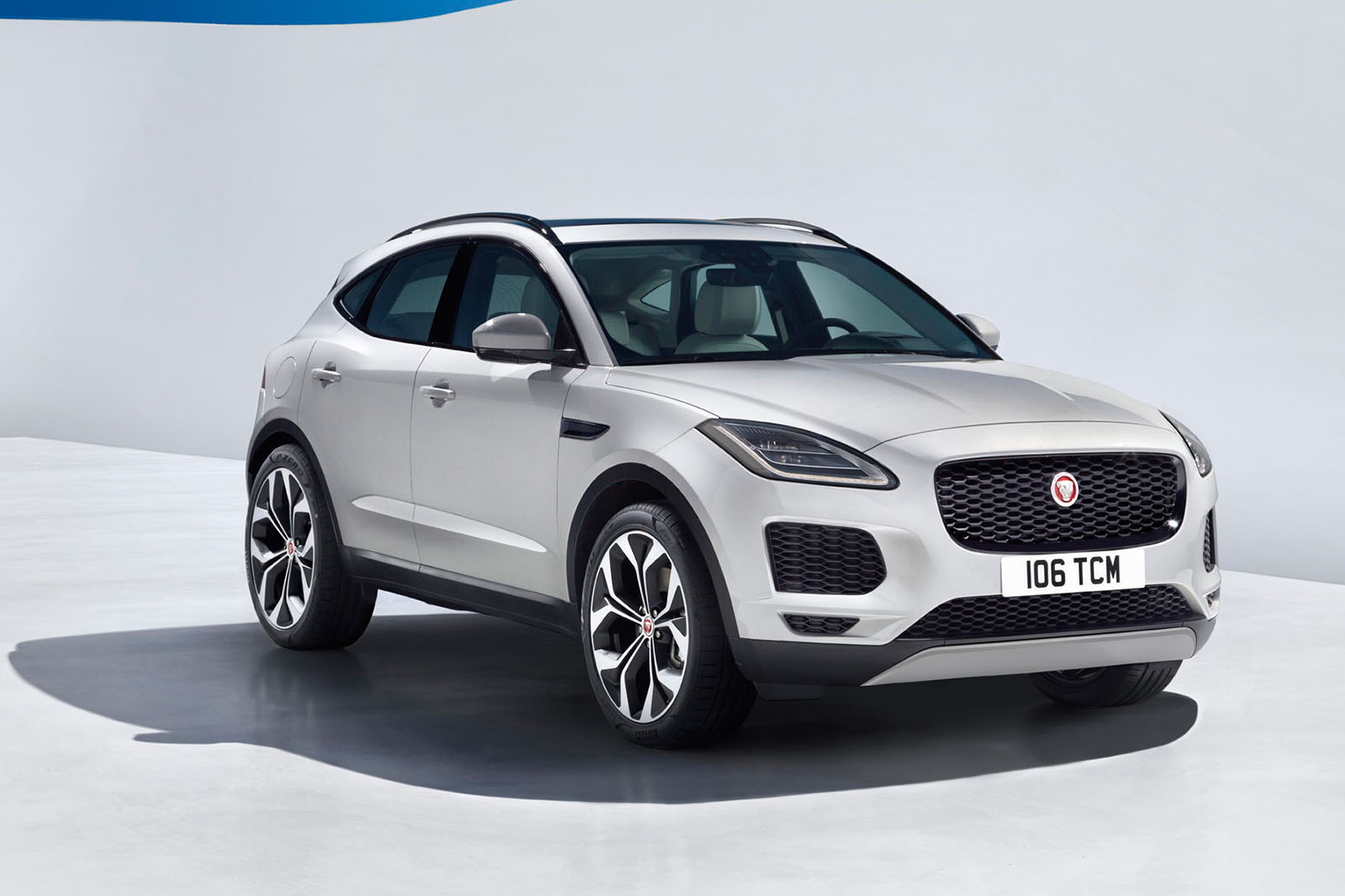 The car, which weighs 1700kg, is much heavier than its main competitors. Jaguar counters by saying that its D8 architecture has authentic SUV capability, unlike that of its road-biased rivals. The use of high-strength steel in the structure helps to reduce the weight, says Wilkins, while aluminium is used for the boot lid, bonnet and fenders.

The extent of the front overhang is disguised by clever design tricks such as the chamfering of the front corners and the long horizontal front headlights. The E-Pace has a roofline and a side swage inspired by that of the F-Type. “It’s sporty and tough looking,” said Callum. 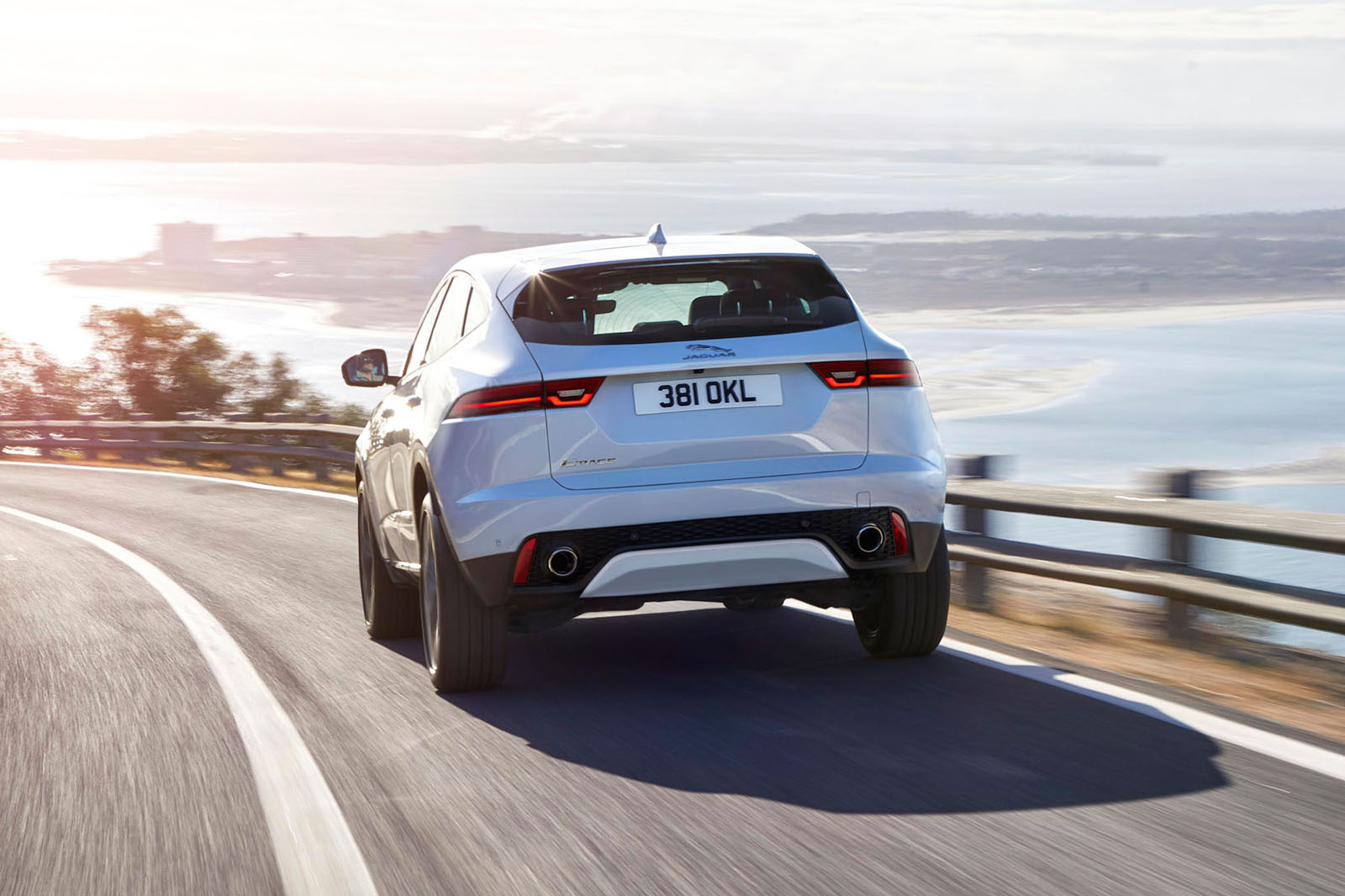 The F-Type influence is also felt in some of the details at the front and rear, particularly at the front, where Callum describes the E-Pace as “unashamedly F-Type”. At the rear, there are large LED lights with a ‘chicane’ graphic. Alloy wheels up to 21in in diameter are offered; the standard size wheel is 17in.

For the interior of the car, Jaguar has made the front cabin driver-focused. The low grab rail from the F-Type has made it in, along with a stick shifter for the automatic gearbox rather than a rotary controller. “We wanted sporty, so we took inspiration from the F-Type,” said Callum.

“We also worked hard on the interior perceived quality, with the right use of metals and materials.” 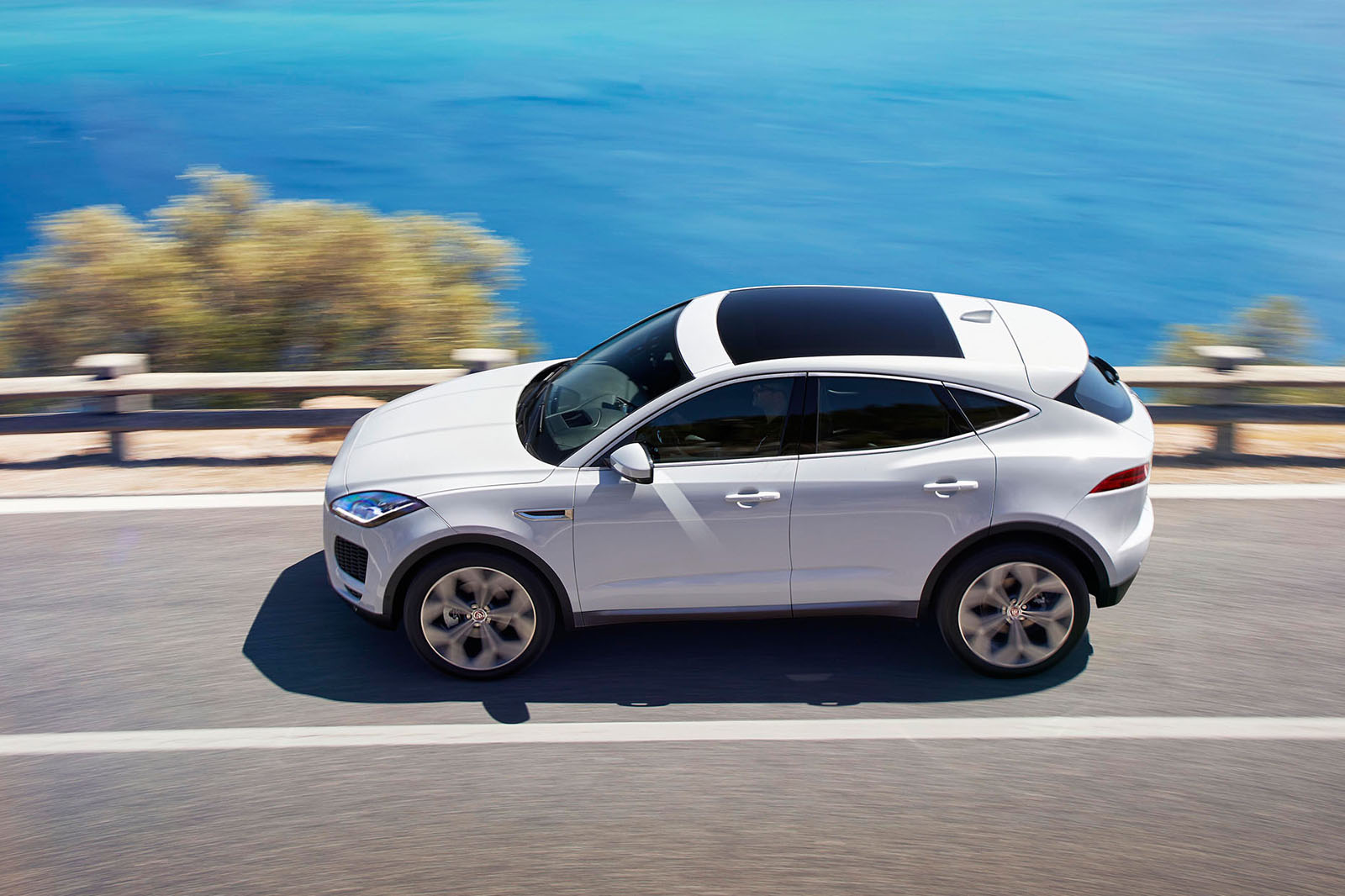 There is the staple SUV raised driving position up front; while, in the back, Jaguar is claiming kneeroom closer to an Audi Q5 than a Q3. There is also plenty of storage and cubby holes, with practicality a selling point Jaguar wants to push. The rear seats fold to create a total capacity of 1234 litres.

“The important thing – the raison d’être – is practicality,” said Callum. “We worked hard on storage like never before. We’ve embraced it and worked hard on it, as we were not known for it before. Now it’s class-leading. There’s lots of space in the car and it has a stylish exterior. It’s a very usable car.”

A large amount of infotainment and connectivity functions have been fitted to the E-Pace in an attempt to attract younger buyers. 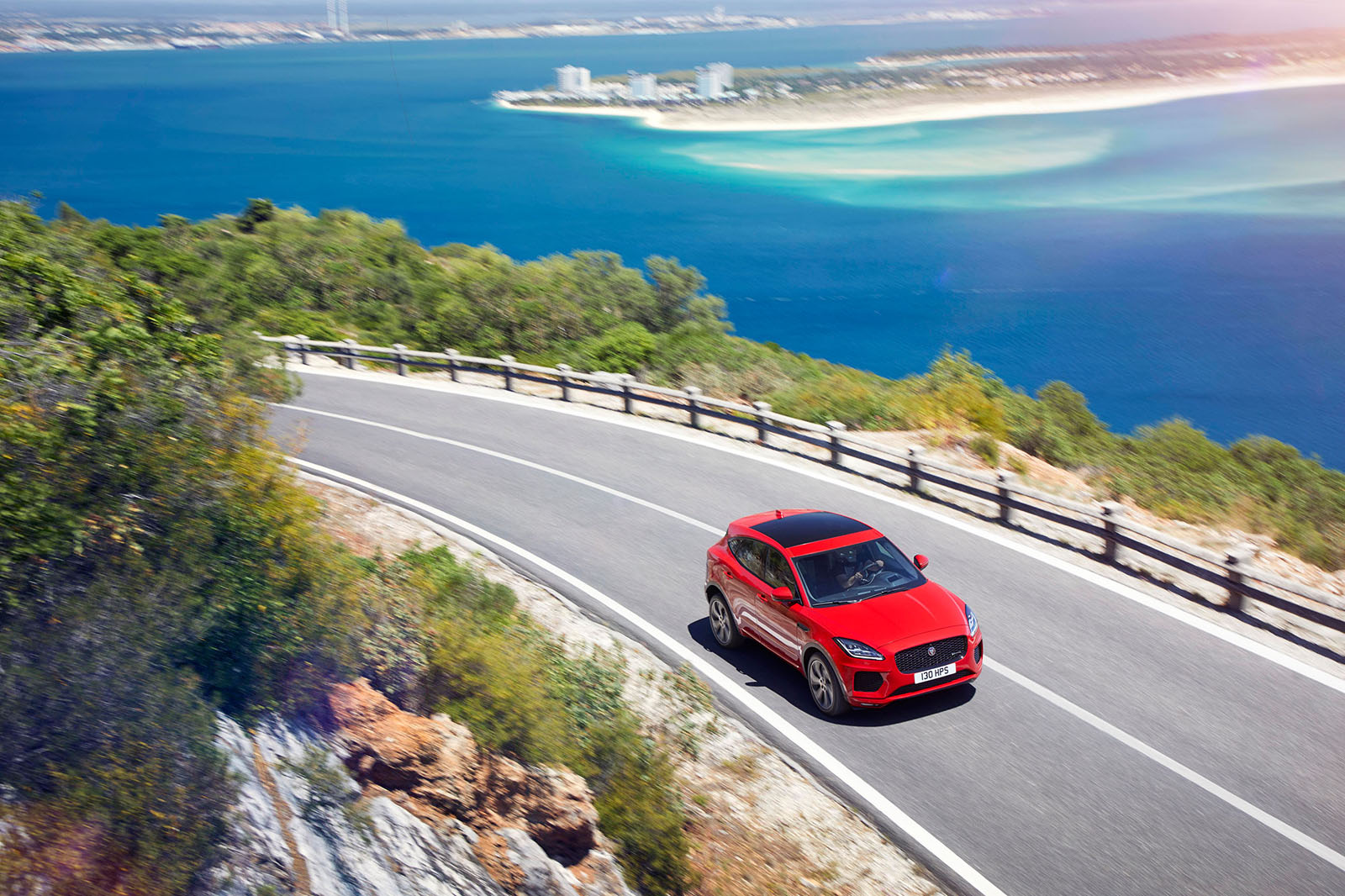 A 10in touchscreen housing the firm’s InControl Touch Pro system is offered as standard alongside three rotary controllers. Talking about the rotary controls, Callum explained that he is a “great believer in tactical controls with that mechanic feel”. He added: “It’s not quite right for Jag [to only have touchscreens].”

There driver’s instrument binnacle contains an optional widescreen TFT display to house information including navigation. There is a 4G wifi hotspot to connect up to eight devices, five USB charging ports and the option of a wearable key, as seen on the F-Pace.

“The car is fully connected,” said Wilkins. “It’s important to offer this to the customer as the car will be on sale for a while, and this is all now necessary technology.” 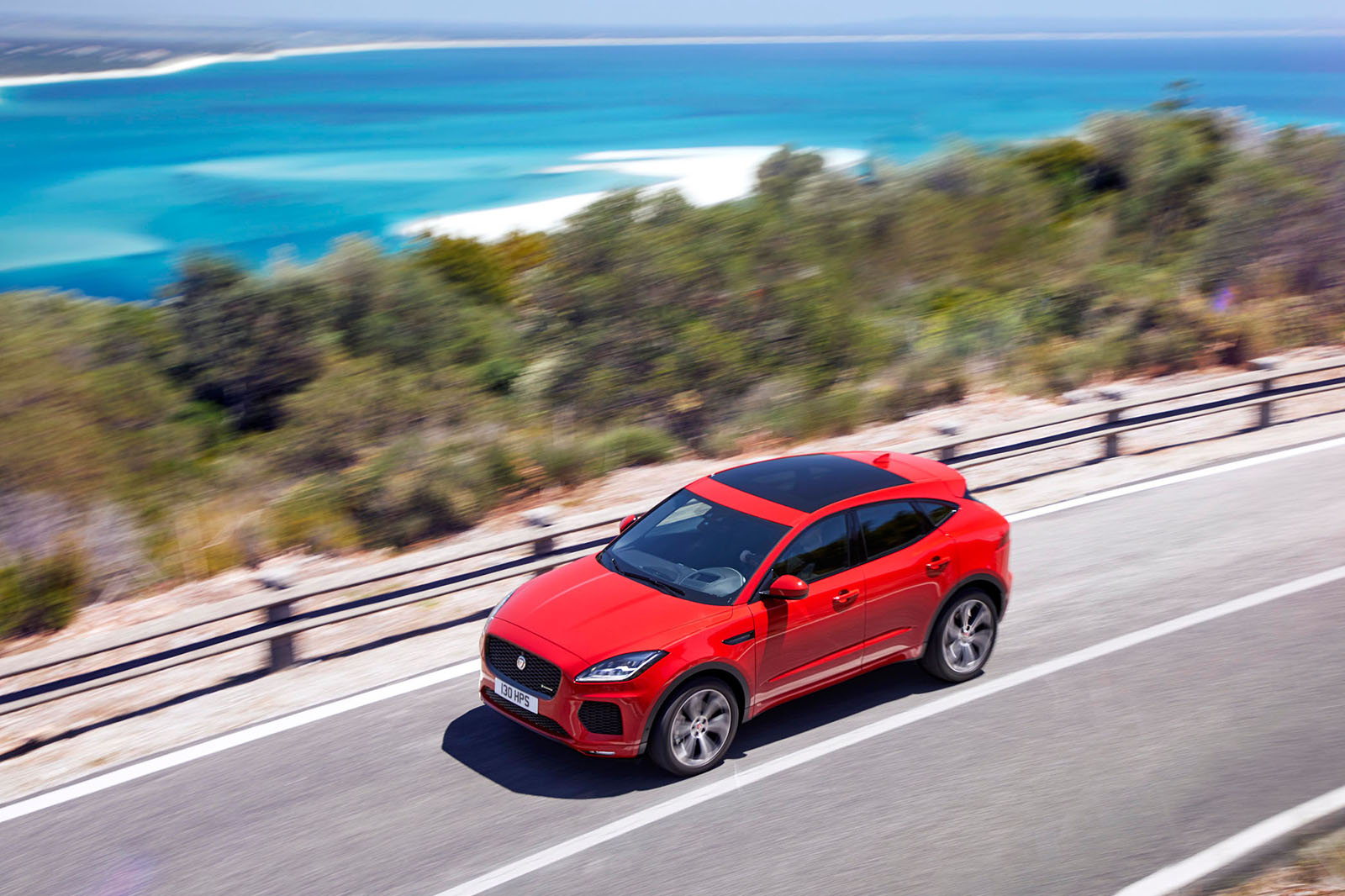 The E-Pace will go on sale in the UK in late 2017, with the first deliveries due around the end of the year. Prices are set to start from £28,500, making it the entry point to the Jaguar range.

The UK and Europe will get first dibs on the car, with production starting in China a year later. Cars made in China will be for the home market.

I can't believe that no journalist has commented on the width of the car, at 2.088 metres in won't go through most width restrictors, will be impossible to park in most supermarkets and will have difficulty passing another car on many country roads.

Another vanity wagon for the insecure.

And it's another crap looking Jag. No doubt even less reliable that all before it.