BACK TO ALL NEWS
Currently reading: Toyota and Suzuki partner for green powertrain and developing market models
UP NEXT
Volkswagen Group facing EU fine for missing 2020 CO2 target

Suzuki and Toyota have announced that talks over the past year have culminated in plans to produce a compact, 'ultra-high-efficiency' powertrain, and put in place a framework for an assault on the Indian car market.

Cars developed by Suzuki will be marketed in India under both the Toyota and Suzuki brands, the latter of which has a firm hold on the country's car industry. These models wull be produced by Toyota's Indian production subsidiary, Toyota Kirloskar Motor Private Ltd, and will reach developing markets across the world, although only India and African markets have been specifically noted.

Toyota president Akio Toyoda said: "Suzuki was the first (among Japanese companies) to enter India and, together with the people of India, has been a presence for pulling India’s automotive society forward."

"As members of Indian society, Toyota, along with Suzuki, will do its best to enhance freedom and fun in a future mobility society and to make “Made in India” vehicles cherished in Africa and many countries around the world."

Suzuki chairman Osamu Suzuki said: "We will receive support [from Toyota] for the development of a compact, ultra-high-efficiency powertrain that is vital to Suzuki. We will focus our utmost efforts on development. It is my hope that new joint projects will contribute to the future success of both companies, not only in India, but also in the global market."

The two brands announced in February 2017 that they were drawing up the framework for a partnership that will allow them to co-develop new environmental, safety and IT technology.

In a joint statement, the Japanese car makers said their collaboration is designed to improve future mobility for the betterment of society. They confirmed that research will be shared, as well as technology and physical car parts.

Toyota president Akio Toyoda said: "We want to cooperate toward enabling all people throughout the world to truly experience the joy of mobility and to achieving a society of future mobility full of smiles. I am truly thankful for having been given this opportunity to work together with a company such as Suzuki, which overflows with the spirit of challenge. Toyota looks forward to learning much."

Toyota is the most Googled car brand worldwide

The announcement came four months after the companies revealed their intentions for such a partnership. The car makers began discussing the prospect of working together in order to keep up with competition. "In the face of the advanced and future technology R&D field, Suzuki is increasingly feeling a sense of uncertainty," said a Suzuki spokesman.

The late 2016 statement went on to say that although Toyota has been conducting R&D in environmental, safety and IT technology, it believes that competitors in European and North American markets may be ahead of it when standardising and partnering with other companies for technological development.

Suzuki’s infamous partnership with Volkswagen ended in a bitter legal battle resulting in the two companies parting ways far earlier than the deal set out, and Suzuki buying a 20% stake back from Volkswagen.

Toyota, meanwhile, has been working on its next Supra in a joint venture with BMW that will also produce the Z5. Both of the new sports cars will be hybrids and will share many components. Development has now separated as the cars near completion, however. 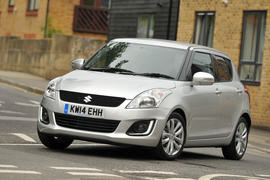 Toyoda has suggested that more partnerships of this sort could be on the horizon. “We would like to always keep our doors open for new partnership opportunities, which will contribute to the making of ever better cars as well as to the development of the automotive industry," he said in 2016.

Read our first impression of the upcoming Toyota C-HR here

Not joining up with GM?

What a missed opportunity for General Motors to re-establish some sort of connection with Suzuki and improve their access to the Japanese and Indian markets. With their shareholdings in Isuzu and Suzuki given up after the bankruptcy and subsequent bail-out by the UAW and US govt, GM has virtually no connection to the Japanese market and it's export connections.