BACK TO ALL NEWS
Currently reading: Rolls-Royce boss rules out baby Cullinan despite success of first SUV
UP NEXT
The next Hamilton? Autocar meets F1 prodigy George Russell

Rolls-Royce boss Torsten Müller-Ötvös has said the firm’s model line-up is now complete following the launch of the Cullinan SUV.

The British firm’s first off-roader is its fifth model, alongside the Phantom, Ghost, Wraith and Dawn. But while other manufacturers are expanding their range of SUVs, Müller-Ötvös said there was no demand among the brand’s ‘ultra-luxury’ buyers.

Asked whether Rolls would consider swelling its line-up with an SUV smaller than the Cullinan, Müller-Ötvös told Autocar: “No, definitely not. You need to go with the flow, so for that reason, I’d never say never, never, never – but we don’t currently have any plans to expand our model line-up any further.

“Our strategy is definitely to maintain our high-end price position and not move the brand just for volume sake into lower-price segments.”

Müller-Ötvös said early sales of the Cullinan have exceeded expectations.

The British firm showed the ultra-luxury off-roader to customers ahead of its official launch recently and he called customer reaction “brilliant”.

The Cullinan is set to face opposition in the ultra-luxury SUV segment from Aston Martin’s revived Lagonda brand. It will relaunch in 2021 with an SUV previewed in a concept sketch. Asked about that model, Müller-Ötvös said: “It’s just a sketch. I can’t say anything more. Cullinan is real.” 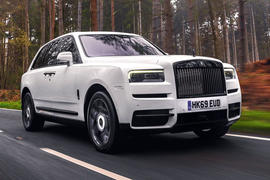 Must have very low expectations. Its a throw away remark, It could be they expected to sell one a month and they are selling 2 a month, that exceeds expectation. I wonder how many they have actually sold, and I wonder if any customers cancelled their order when thay saw how ugly it is..

Must have very low expectations. Its a throw away remark, It could be they expected to sell one a month and they are selling 2 a month, that exceeds expectation. I wonder how many they have actually sold, and I wonder if any customers cancelled their order when thay saw how ugly it is..

Ugly, perhaps you should have added, IMHO. Why would any prospective customer of that car, order it sight unseen...they have luxurious dealer facilities to relax in, while they spec the car with a staff member. For the most part, amassing wealth takes intelligence and patience, working your way up the ladder and driving cars that match your ability to afford them. RR is a very successful company, selling to equally successful customers...what makes you determine otherwise, with figures that even for using as discussion pieces, are plainly silly?.

...It'd fit those wheels much better than the full size model does.

I was told, by a RR dealer, that the current waiting list for a Cullinan is 2 years. I really don't think they need to create even more demand by creating new models.

Next step, I hope, is towards electrification. An even-more-silent Dawn would be a lovely thing.