BACK TO ALL NEWS
Currently reading: Lagonda to relaunch with 'radical' electric SUV in 2021
UP NEXT
Mystery Ferrari LaFerrari prototype spotted with new bodywork

The first production model from Aston Martin’s revived Lagonda brand will be a super-luxury "radical" electric SUV to be launched in 2021 to rival the Rolls-Royce Cullinan and Bentley Bentayga.

The 114-year-old brand is being relaunched as a stand-alone maker of futuristic, high-tech luxury cars. That was previewed by a Lagonda Vision Concept saloon at this year’s Geneva motor show.

While the first production Lagonda will be an SUV, a teaser image released by the firm shows that it will follow the same bold design language. Marek Reichman, Aston's design boss, previously told Autocar that future Lagonda models would be "game changers" in the super-luxury class.

Aside from confirming it will feature a battery electric powertrain and offer four-wheel drive, Lagonda has yet to reveal any technical details of the machine. Aston says it will be built around “near-future technologies” and promises an SUV that is “supremely luxurious”.

Each car will be hand-built on Aston’s new dedicated electric car architecture. Producing an SUV as a first electric car echoes a trend of other firms, because the high-riding design of crossovers can easily accommodate the space required to place the batteries in the floor of the car.

The ‘near-future’ technologies are likely to include semi-autonomous systems, with the help of an as-yet-unnamed technology company based in Silicon Valley, California.

Aston boss Andy Palmer said: “In reviving one of the most iconic names in motoring, we have created a unique opportunity. One that allows us to cast aside an inherited 20th-century approach and instead design cars around 21st-century demands and desires.

“The Lagonda SUV is the first of its kind: a spacious, high-performance 4x4 that successfully reconciles a love of technology, luxury and style.”

Opinion: will Aston Martin and Apple team up on Lagonda project? 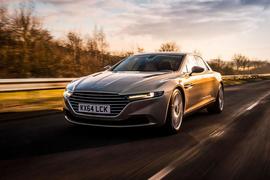 Looks cool, can see why

Looks cool, can see why people will like it. Should be a big success. Makes a change from a RR which is nice.

So let me get this right - the concept shown at Geneva was such a roaring success that Aston has now decided to pull-ahead the SUV?

Personally I'm not surprised. In my view, the concept was one of the ugliest offerings I've seen so far this year

I don't know if you've heard,

I don't know if you've heard, but apparently SUV/CUV sales are on the rise...

I loved the Geneva concept.

Dont know what the above two

Dont know what the above two images are supposed to represent.

The glasshouse is so shallow that there is minimal side visibility and zero rear visibility. The rake of the windscreen is so exaggerated that the driver must be sitting very far back which leaves a huge area in front.

If this is a 'bold design language' as AM claims, what new concepts does this new language hope to realise other than mere styling?

I assume the driver is

I assume the driver is supposed to stick his head out off the sunroof to see out :-)

According to Lagonda they

According to Lagonda they "stole the show" at Geneva with their concepts. I'm afraid I can't agree, the interior of their luxury concept looked like a panic room.

At geneva there was one of the most exquisitely designed modern saloon cars I have ever seen. Of incredibly elegant form with quite perfect detailing. Could easily have worn an Aston or Lagonda badge but instead had a Mazda one. The Vision Coupe.