BACK TO ALL NEWS
Currently reading: The return of Zenos: the Brit sports car maker is back on track
UP NEXT
Touring Superleggera Aero 3 is retro-inspired V12 supercar

The return of Zenos: the Brit sports car maker is back on track

It’s only months since Zenos was rescued from the abyss, but the brand’s reconfigured E10 sports car is already well on the way. Have the new owners learned from past lessons?
Share
Open gallery
Close
Share story

Well, that didn’t seem to take long. Zenos is back. Nearly. The company you’d barely started hearing of before it went into administration at the start of the year has been rescued by one you’d forgotten existed (AC Cars is one of the oldest names in the business with, seemingly, one of the most complicated histories in the business too, but such is motordom).

But more on that in a bit, because here is a development mule of the new Zenos E10, which should go back into proper manufacture in February next year.

A quick recap, then. Zenos was launched in 2014 under the guidance of former Lotus and Caterham duo Mark Edwards and Ansar Ali. The first car out of the block was the E10 – a two-seat, mid-engined roadster with one of the cheaper carbonfibre composite material tubs and a Ford 2.0-litre, naturally aspirated engine behind that driving the rear wheels. 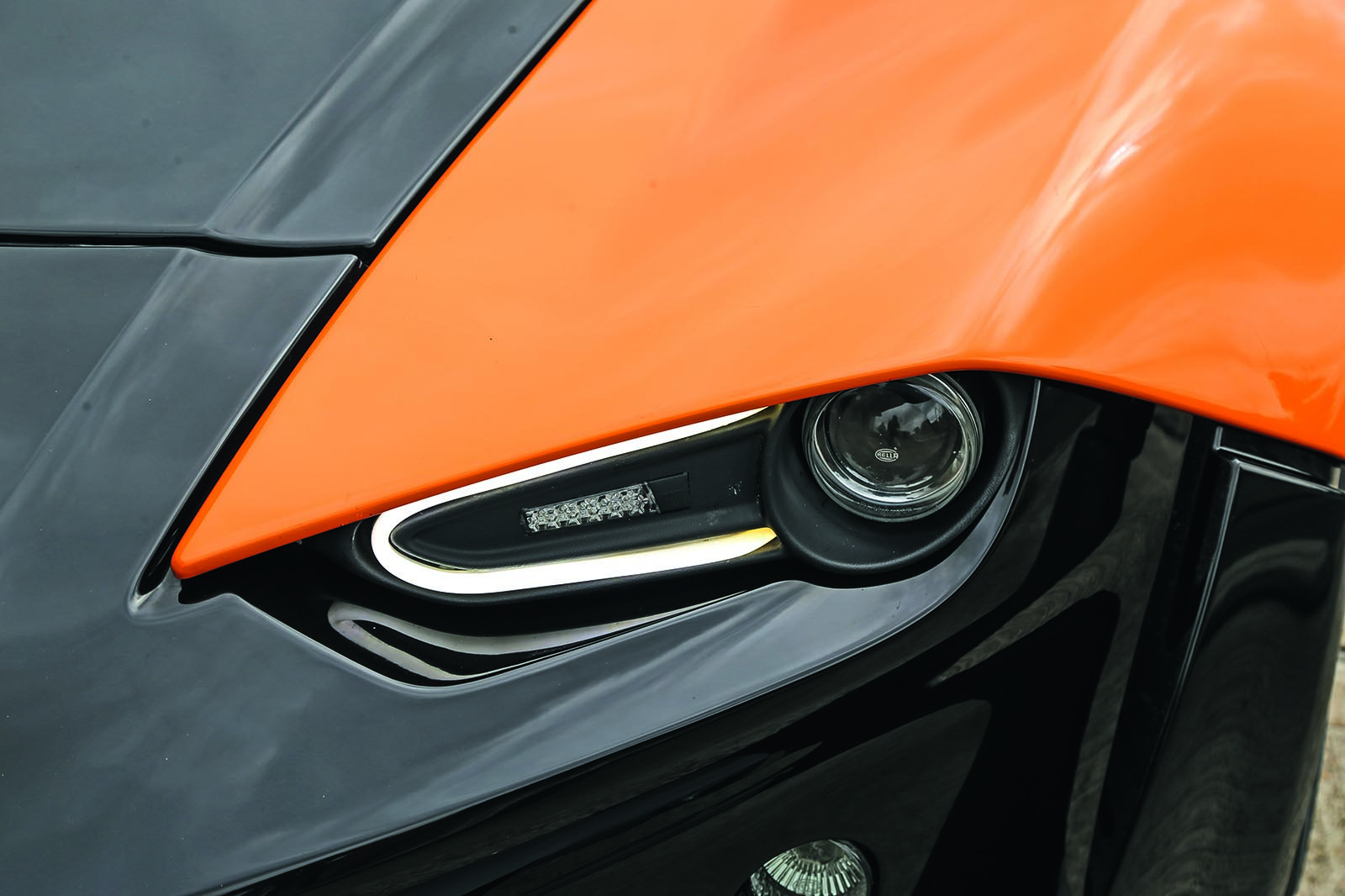 And it was good. Okay, there were a few rough edges when it came to finish, but you’d expect them on a car that was built down to its price. The fundamentals were there. It rode, it steered, it went; the brakes needed a mighty shove, but for the most part the E10 was enjoyable. And, crucially, Zenos had done, so they reckoned, what most new small manufacturers forget to do: pay attention to how much it costs to build.

To an extent, the plan was working. You could buy the cheap one, but hardly anyone did. However, they did buy other E10s. There are around 120 Zenoses on the road – half in the UK, about 25% in the United States and the rest elsewhere. 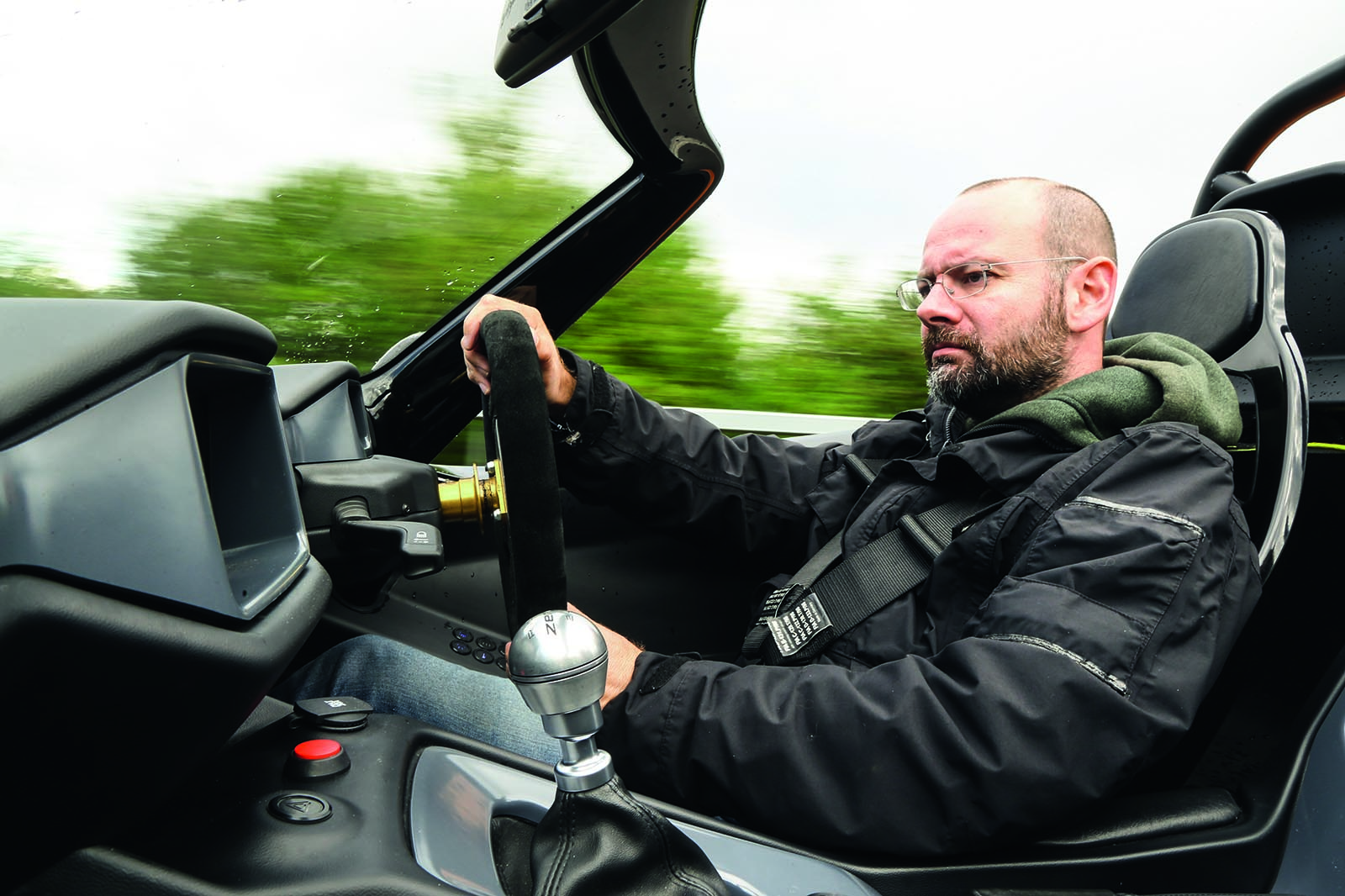 What went wrong? What often goes wrong. Some cancelled orders. Cashflow. A lot of things at once that, fundamentally, led to one big thing: the money running out.

That was in January. In March, it was announced that a consortium fronted by AC Cars, owned by Alan Lubinsky for a little over 20 years and whose sporadic production has moved around since, had taken on Zenos and its factory near Wymondham, Norfolk. However, it won’t stay there, because production is moving to South Africa after the car gets some necessary upgrades.

But here we’ll move on to the car, which still looks like any other Zenos to me. This is a test mule, says Jon Peeke-Vout, an engineer who has moved over to the new company from the old one, so please overlook the rough edges. But, frankly, it isn't so far away from the old one in terms of fit and finish anyway. 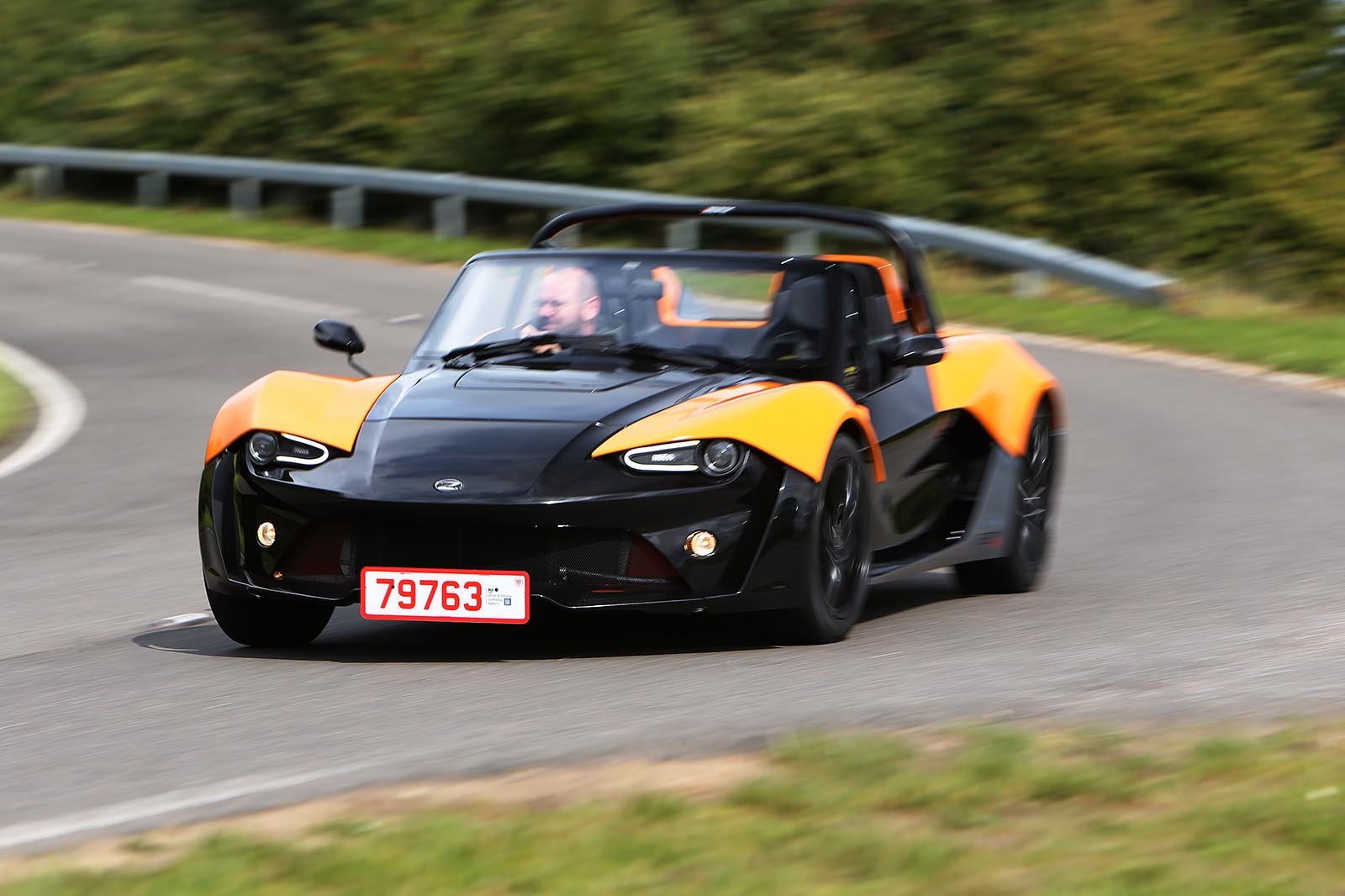 This model is an E10 S, the 2.0 turbo car. But even since March, some notable changes have been made. The car was “95% right”, says Lubinsky, but there were problems. There were the weak-feeling brakes, which have been replaced by six-piston jobs, but there was also a really noisy air intake system, which sat behind your head and made earplugs or a helmet a necessity.

That has been moved to one of the side air intakes, an area itself made available by solving another problem: Zenos has fitted a water-to-air charge cooler, whose radiator now sits at the front. Previously, the air intercooler sat in the side pod but, along with the engine radiator at the front, it didn’t keep the turbo or engine cool enough under prolonged track use, so the ECU would retard the ignition and the car would lose some power after a few laps.

A new shroud behind the front grille channels air to those radiators better now. There’s a new roll cage in the pipeline too, offering the strength of the one you see here but rather better integrated into the rear hoops. All of which adds a few kilos, but this is still a sub-800kg car.

All of these things are retro-fittable to existing E10s, says Lubinsky. “We’ll get retro-fittable upgrades first, then move on to more development afterwards,” he confirms. Zenos’s earlier plan was to introduce an E11 coupé, and it still intends to. 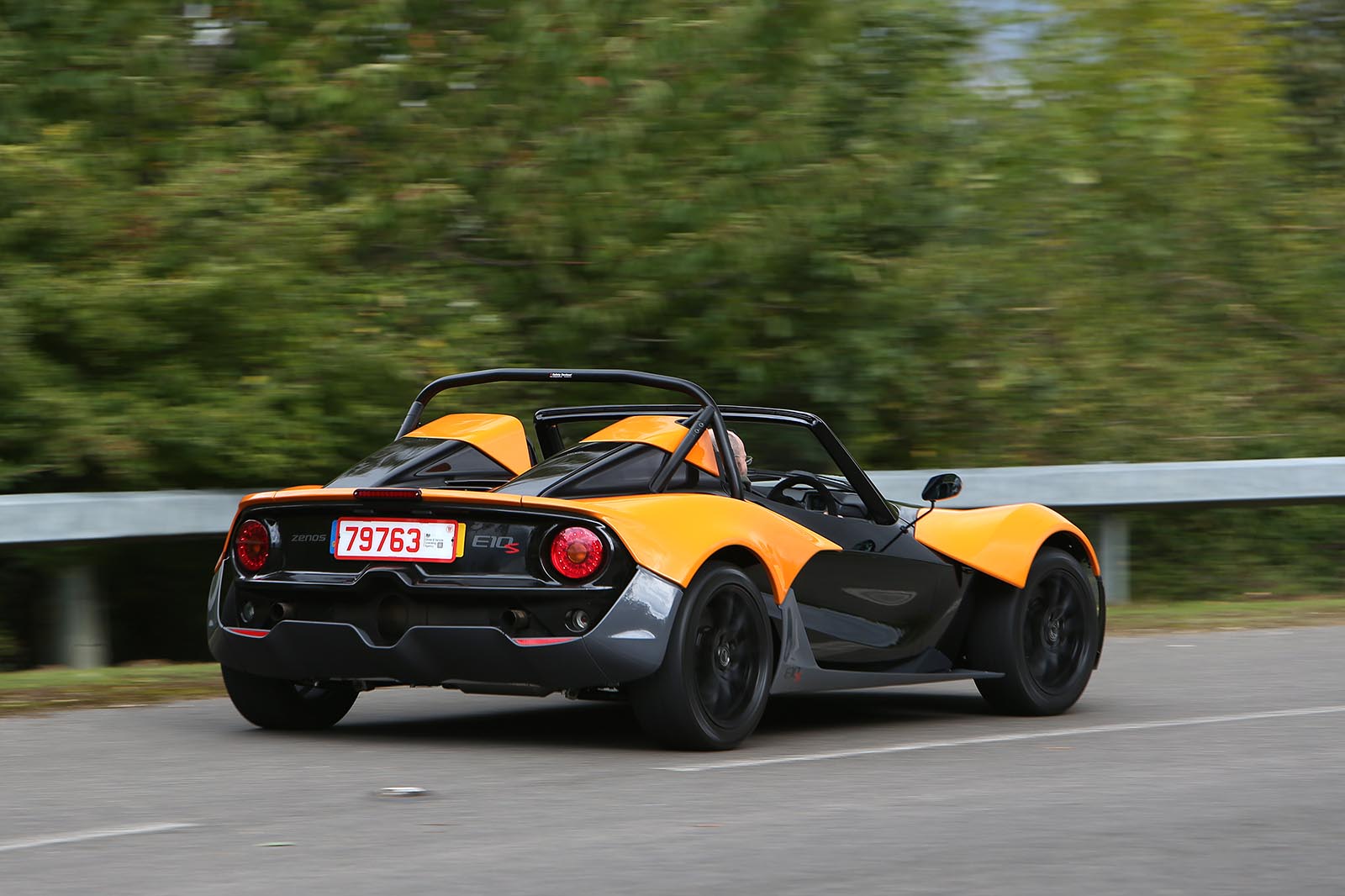 First, though, I have a go in this car. And it’s good, you know. All of the things that made it so appealing in the first place are still there. It rides really well, with a combination of bump absorption and body control that you don’t find too often – and when you do, it’s often in a car from Norfolk. The unassisted, two-turn steering is heavy at parking speeds but lightens up as you get moving, regains weight again when you lean on it in corners, and offers terrific tactile feedback and road feel with only a little nibbling under braking. The brakes are now fine too; they still want a shove, as unassisted brakes do, but they’ll stop this car just fine. The handling is agile, adjustable and rewarding.

Now that the air intake has moved, you can go helmetless. There’s precious little buffeting and, while the engine zings and its turbo fizzes, it’s a decent noise (there’s a new exhaust too) and no longer deafening. Power is now 260bhp, there’s only a little lag and the six-speed Ford gearbox to which it’s mated is slick enough. 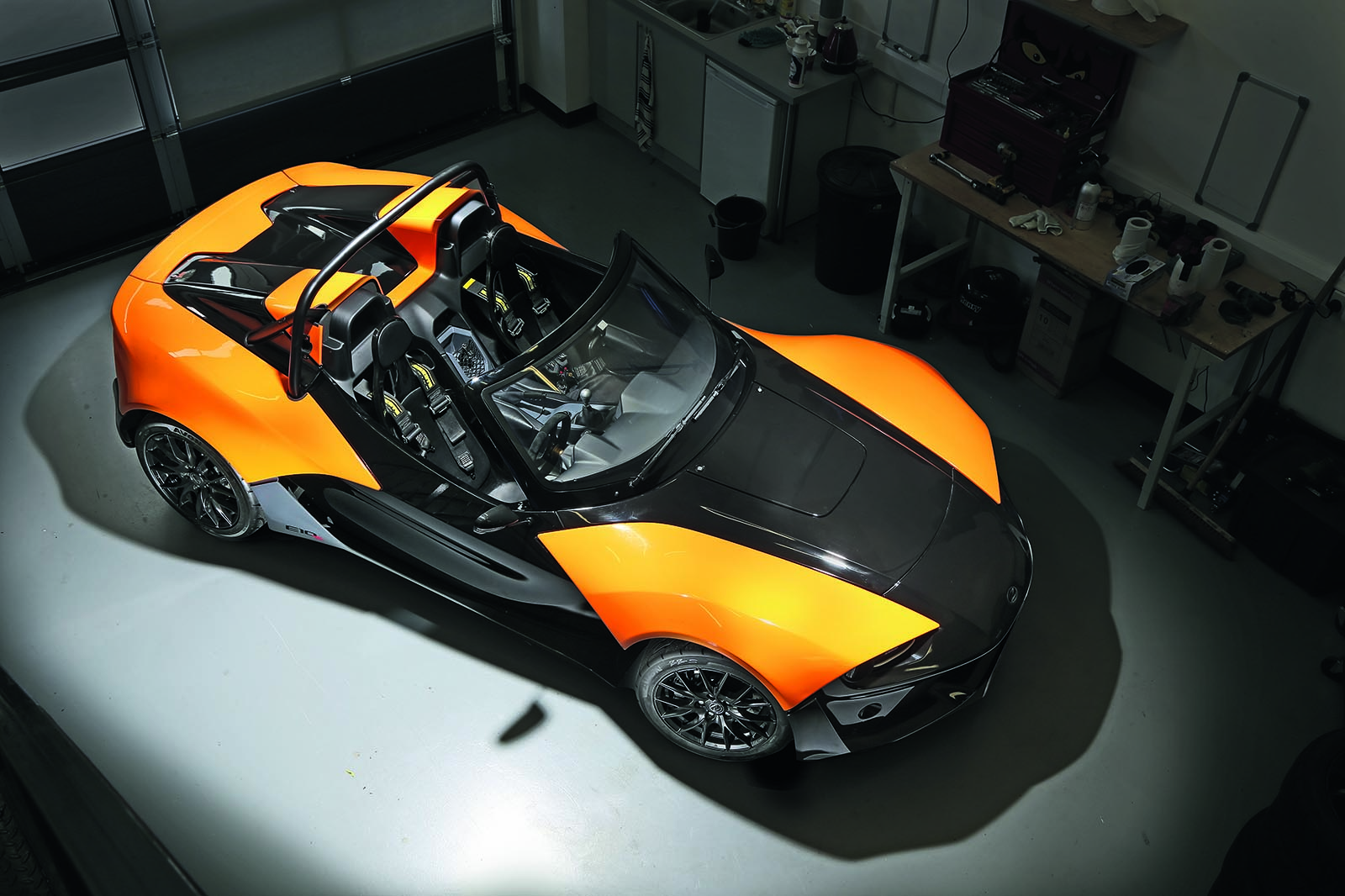 So it’s good. But, then, dynamically it always was. There’ll be a few interior changes too, to keep the cool digital screens visible in sunlight and weatherproof the switches.

The 2.0 E10 S, at the start of this year, was around £35,000 in this spec, with a windscreen fitted (again, hardly any were sold without one). Zenos doesn’t want to offer too many options, because it complicates matters and they wanted saleable dealer stock. But while it’s too early to say what final pricing will be – because tooling hasn’t even reached South Africa yet – the idea is that it won’t rise too much from there (which is a more eyebrow-raising figure than the initial Zenos plan, but you’ve got to make a living). 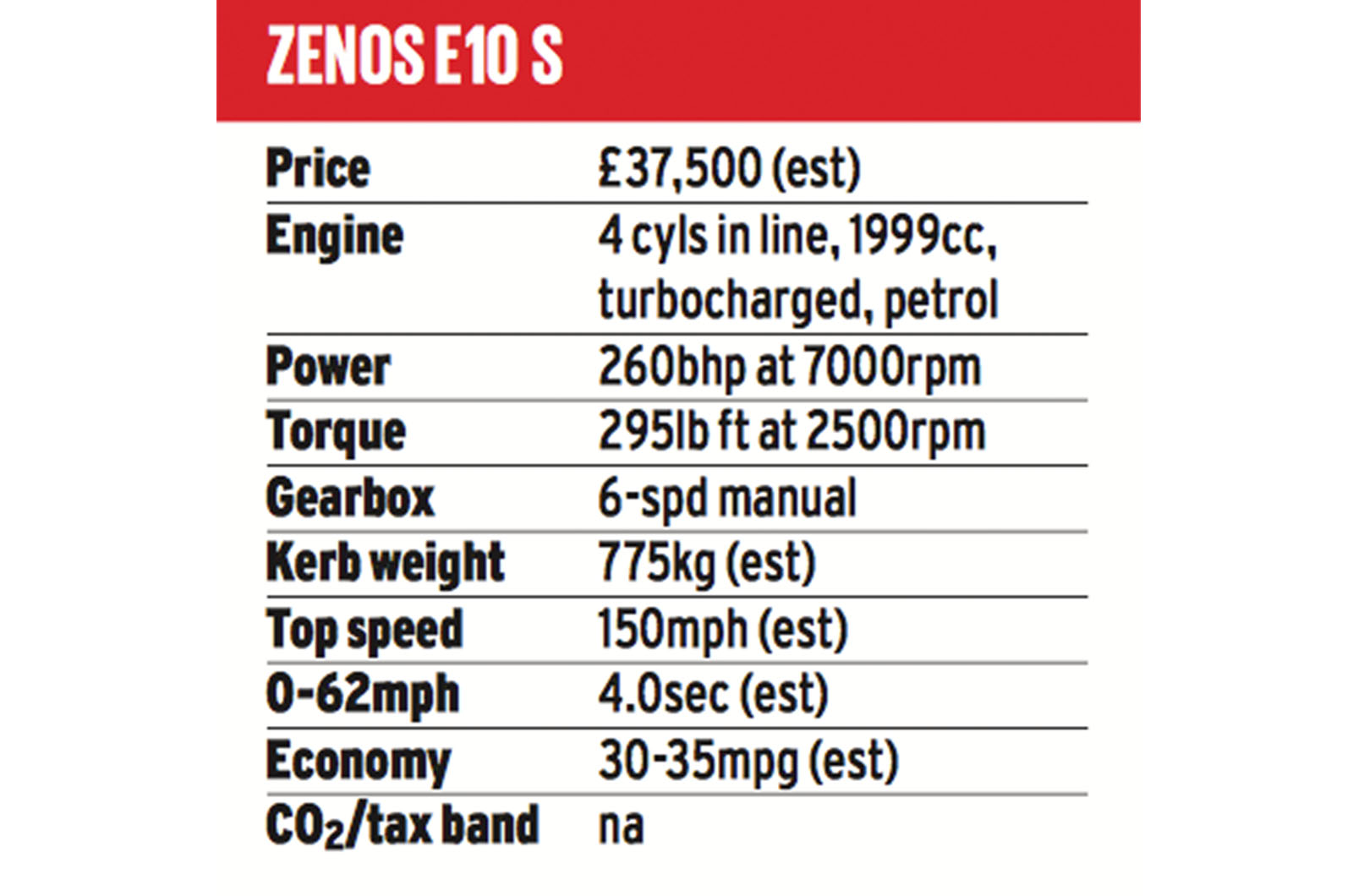 Will it work? Who knows. You’ll be able to buy it in most countries and as few as 50 cars a year or more would initially keep Zenos happy. So it could well work. It’s certainly good enough to drive. Here’s hoping.

It is next to, but independent of, Lotus Cars’ headquarters (although most of the engineers here are ex-Lotus staff). I have come here to find out about Zenos’s rebirth.

Zenos started here and it will stay in the UK at the new location too – but it won’t build cars here.

“Production is moving to South Africa,” says company chief Alan Lubinsky, because labour there is more affordable and the Zenos, like all low-volume cars, is a labour-intensive build.

There’s a company called Hi-Tech in South Africa, which used to make chassis for Noble and now punts out cars under the Superformance brand (its Shelby Daytona Coupé is a thing of wonder). There’s good craftsmanship at a lower price than in the UK and, while it’s hoped that some UK suppliers will stay on board, Zenos plans to make more in-house than was performed in Britain.

Zenos’s facility in Wymondham mostly performed assembly rather than actual fabrication, with that outsourced to suppliers.

Will it matter to buyers that this isn’t a ‘British’ manufacturing company? Who knows? Personally, I doubt it.

Far too expensive. This car has so many different potential rivals.

The company shouldn't have created it in the first place.

...Tend to be affordable by middle-aged guys who frankly are likely to want a door (and therefore likely to buy a Boxster). Niche of a niche in other words!

caterham seem do to ok with prices which don't appear to equal what you get; you can't list everything on a spec sheet, or put a price on it. this car is desined for the same complaints - and probably from the same people - that a lotus gets; it isn't built like a porsche, it costs too much, the company doesn't make much money. those people completely miss the point, don't appear to realise that a lower price won't guarantee more sales - which they would then need to maintain the same profit amount, and if they aren't selling many the price will naturally be high due to overhead distribution. then, let's not forget that they may need to get it back in to production sooner rather than later so that they can get some money moving about and start developing and improving it, a scheme we've seen successfully deployed by lotus. i, for one, would like to see one in the style of the caterham 160, which is more about the physics of things than speed and power

looks weird to me.