BACK TO ALL NEWS
Currently reading: Online car configurators: the firm that lets you build your own Bentley
UP NEXT
New BMW M3 Touring due in 2022 to rival Audi RS4 Avant

Online car configurators: the firm that lets you build your own Bentley

Enjoy whiling away the hours configuring your dream car online? We visit a British firm that is making it possible
Share
Open gallery
Close
Share story

Tucked away in a small business studio in countryside six miles from Blackpool is probably the biggest car maker you’ve never heard of.

You’ll look in vain for an army of assembly workers, though. The people who put the cars together are not here, you see. No, they’re you and me; people in homes all over the UK, sitting at their computers using an online configurator to choose colours and trims, and build their dream motor.

RealtimeUK, this small business in the Lancashire village of Westby, is where the online configurators used by Bentley and Volkswagen are designed and produced. Every component they show, be it a Continental’s Tamo Ash over Piano Black single-finish veneer or a Golf’s optional 17in Karlskoga alloy wheels, starts life as a line of code - the same code the factories in Crewe and Wolfsburg use. Each code generates a flat, two-dimensional image of a part or even an entire car. RealtimeUK’s expert designers bring these thousands of unexciting and functional images to life by applying light, shade, perspective and texture in a series of layers. The result is images of cars and components you’d swear were real. 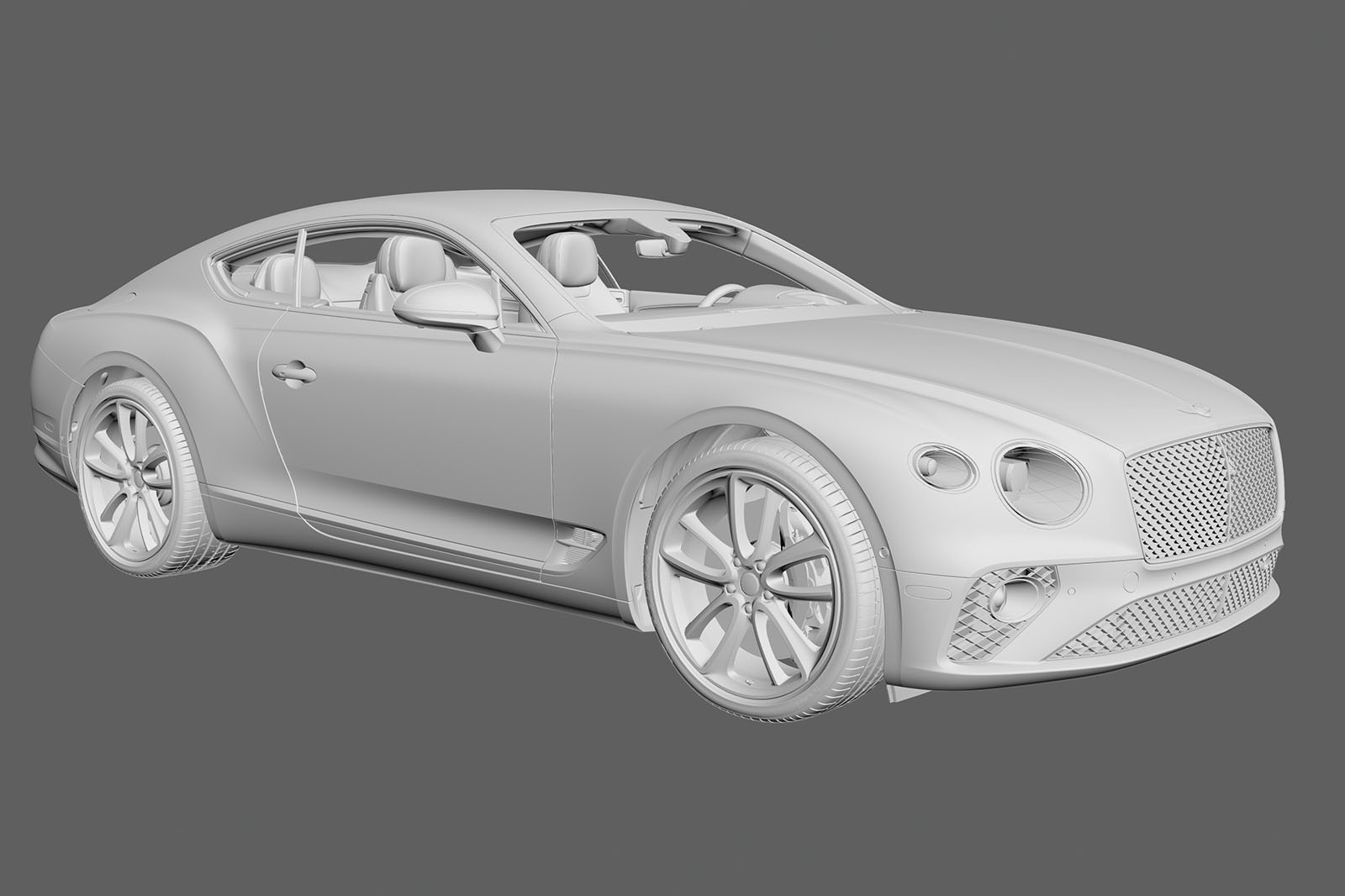 Once upon a time, all a new-car customer had to go by was a brochure, an options list and their own imagination. Now, they can amuse themselves by speccing their chosen car on a configurator and seeing it evolve before their eyes in high resolution and perfect detail on their computer or smartphone. Bentley reckons its customers typically spend eight minutes configuring their new car. Given that there are up to seven billion possible permutations of options, such as paint, hide, veneer and stitching, on a GT alone, it’s surprising they don’t spend longer. The GT’s configurator requires 162,000 images to render these combinations of trim - more images than were created for the original Toy Story movie. If they were played one after the other, you’d be sitting at your computer watching them for five hours.

Play the Mulsanne’s 820,000 images (that model is a lot more configurable than the GT), and you’d be there for 9 hours and 20 minutes. That being so, it’s good to know that if a lot more of us were to come into Mulsanne money, Bentley’s server can support more than 14,000 simultaneous configurations.

Upstairs at RealtimeUK’s smart barn offices is where the heavy lifting is done. It’s here that a team of talented, tech-savvy petrolheads sit, rendering the many layers required to form a configurator visualisation in glorious detail. Their Bentley jewel headlight lens is a thing of beauty; where brake calipers are a different colour, they reproduce a corresponding tint on the alloy wheel. 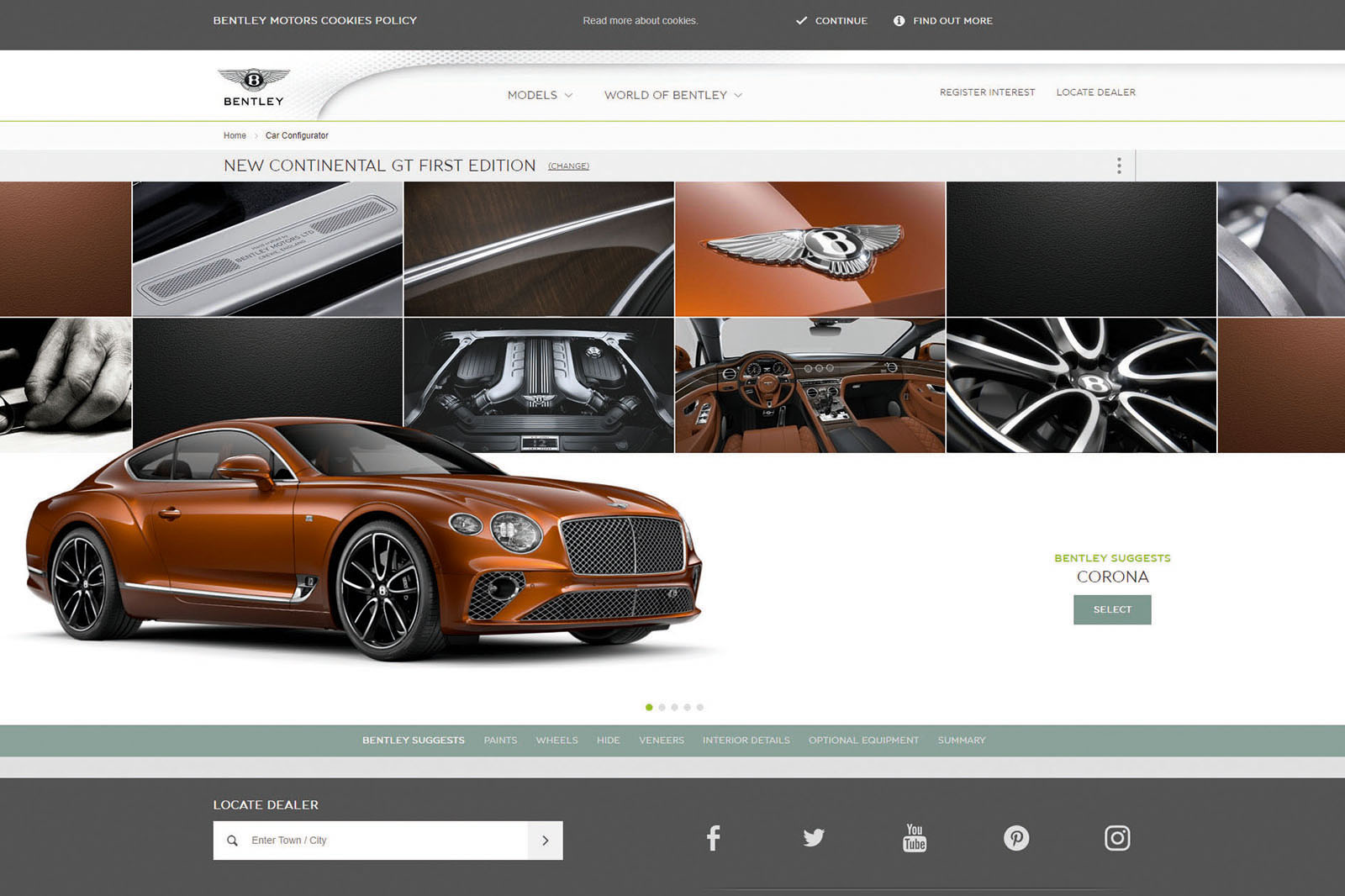 The images you see on RealtimeUK’s Bentley and VW online configurators are in 2D, but downstairs at the company’s Westby office (it has another site in Manchester), they’re putting the finishing touches to a 3D virtual reality configurator that uses all the layers and visualisations it creates.

Comment: The joy of configuring a McLaren 720S you can't afford

The day I visit, the embargo on the new VW T-Roc has just been lifted, so it’s this car I’m invited to poke around in. I put on a VR headset and grasp a hand controller. Pressing a button on this generates a blue arrow ahead of me and a circle where, when I release it, a virtual T-Roc suddenly appears. I can walk around it or inside it, whatever I wish. To move inside I can just walk through the car’s body or open a door.

Everything is rendered in perfect, 3D detail. It really is as if a T-Roc were standing in this small room for real. 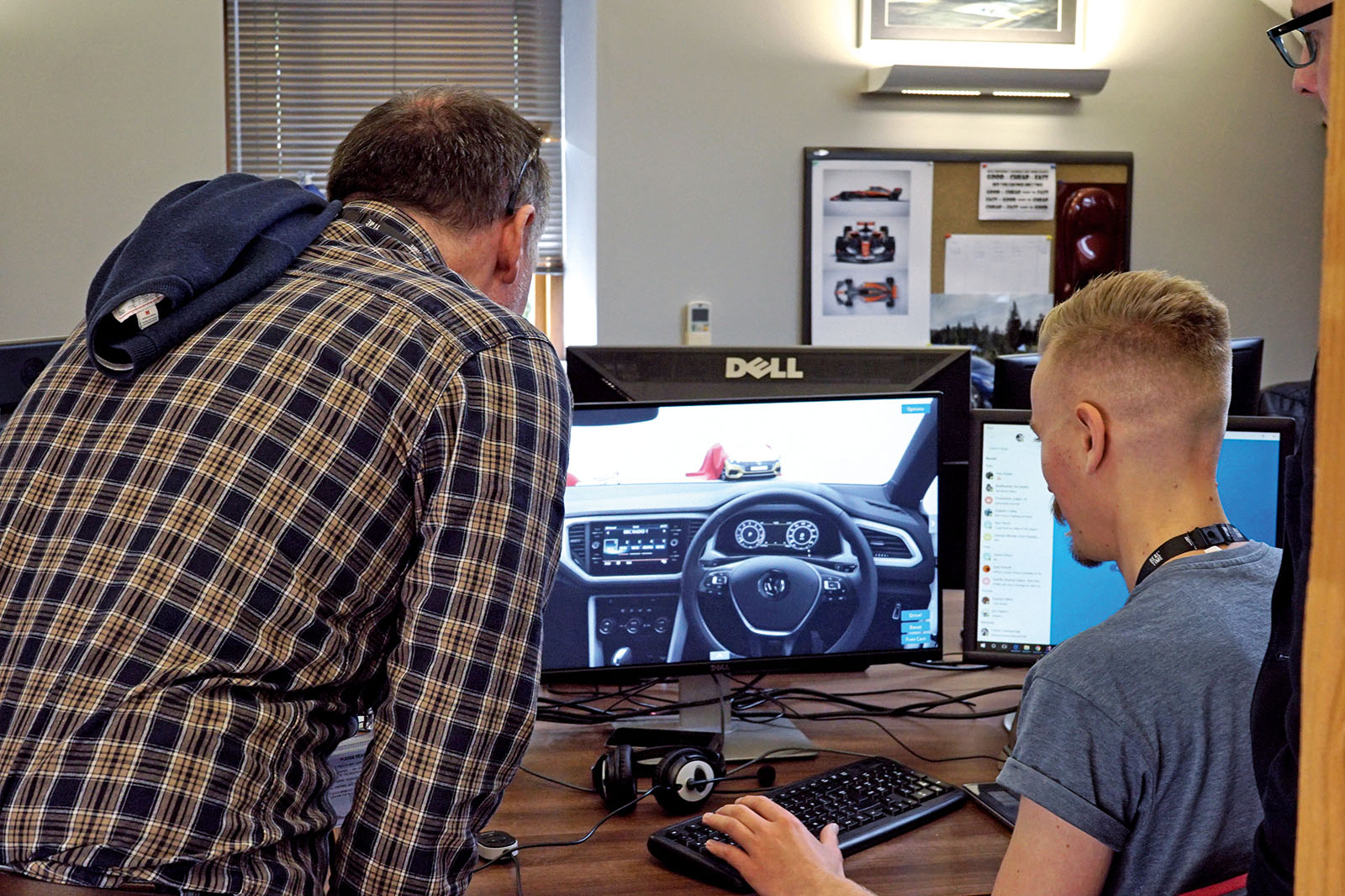 On a future version, if you want to check the load volume of the boot, you’ll be able to pack it with virtual luggage. It’ll have haptic functionality, too, so you can operate some of the vehicle’s switchgear, in effect seeing what happens if you press a particular button or move a stalk.

There’s more. If the VR experience has the car moving and the road is bumpy, then in the future it will be possible to wear something that provides the appropriate sensations from the road surface and the feeling of motion.

Not surprisingly, Tony Prosser, the founder and managing director of RealtimeUK, is excited about the potential of VR. “With this portable technology, dealers will no longer be tied to their showrooms, while customers will be able to see and experience their chosen car down to the last detail without having to imagine what it might be like,” he says. 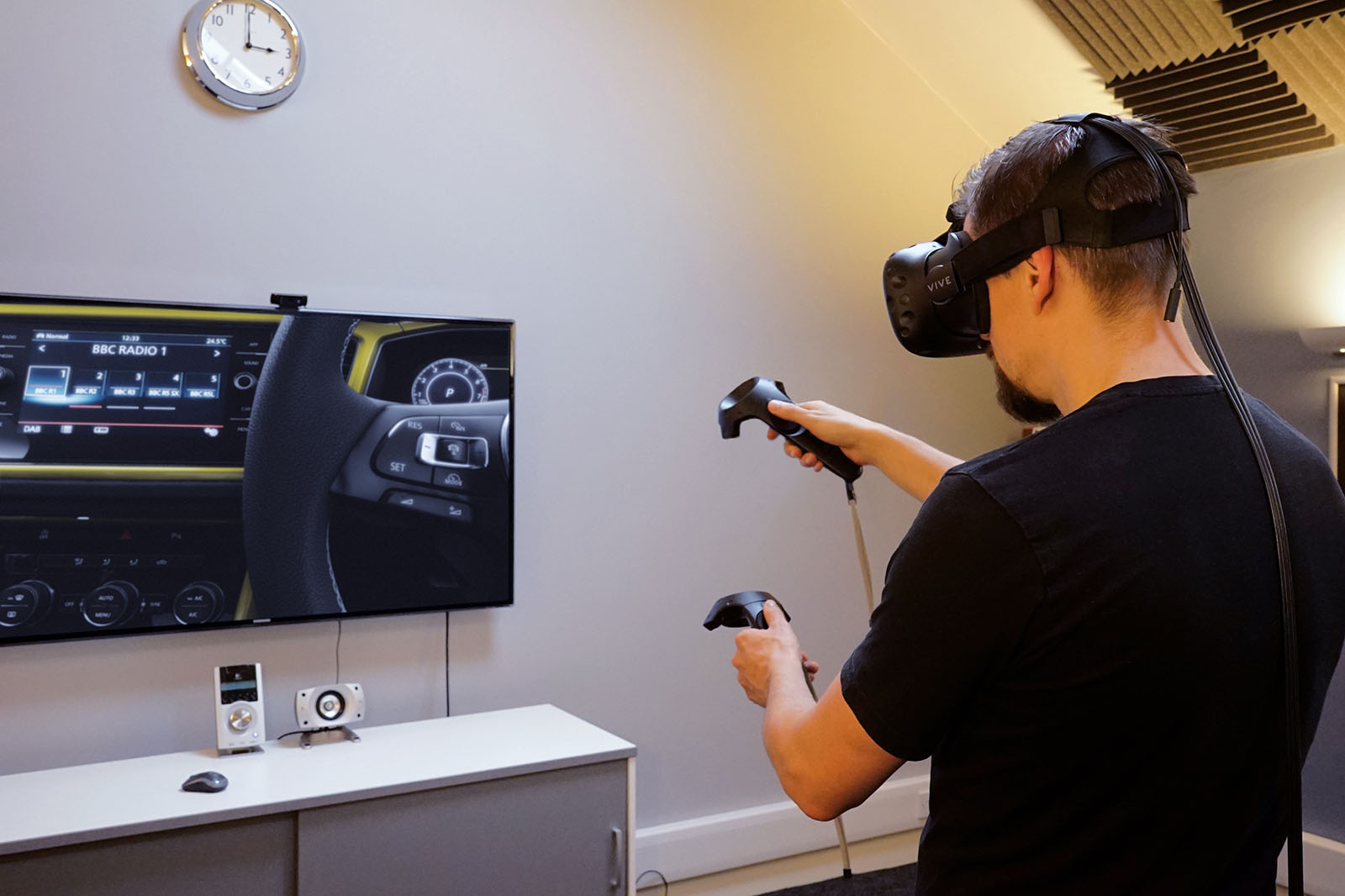 It’s appropriate that this man who makes the invisible visible is himself something of a visionary. As a student studying technical illustration at Blackpool Art College in the early 1990s, he noticed how 2D software was developing into 3D, and then into 3D animation, making movies such as Pixar’s Toy Story possible.

“I could see the way things were moving and I wanted to be a part of it,” he says. “But I could see car makers didn’t know what to do with the technology, so in 1996 I started RealtimeUK to develop it and show them. Now we have two offices and 34 staff, and we’re still growing.”

One of Prosser’s proudest achievements is being involved with Bentley’s Look Closer project, which, using a gigapixel image, allows you to zoom into the Bentley logo stitched on the passenger seat of a Mulsanne from about half a mile out. 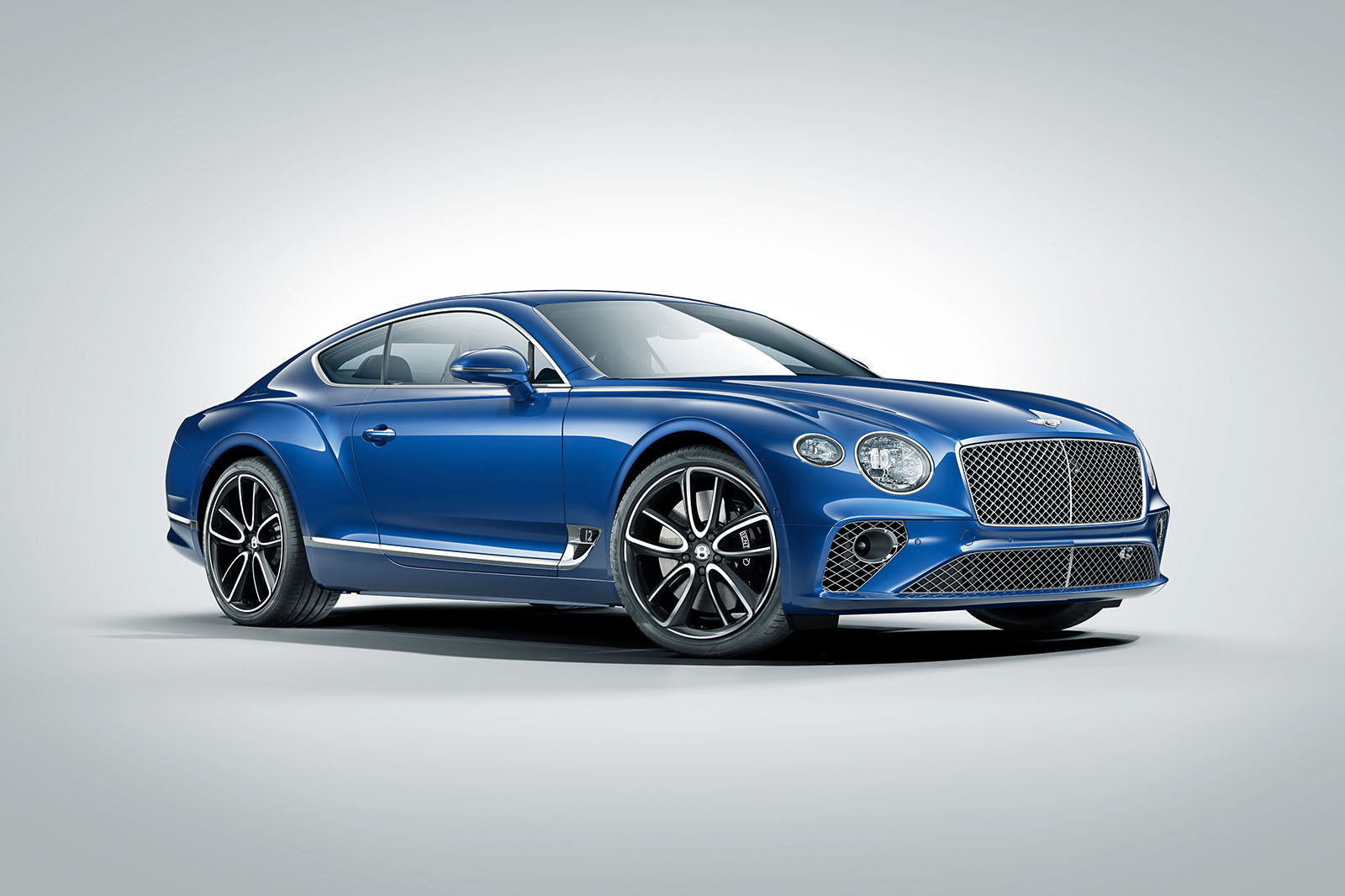 But that’s just a bit of fun. Upstairs at the Westby office they’re engaged in the serious business of making car-building possible for you and me. Perhaps when autonomous vehicles are a reality and we’re free to relax in cars, configurators will need to render more interesting options. I can already feel the baize on that snooker table.

Achieving the look of leather

Reproducing the way leather performs when stretched across seat foam is a key piece of the configurator designer’s art. The aim is to create those surface contours, creases and raised stitching that tell you what you’re looking at is real.

On receiving the CAD data (Figure 1) from Bentley, the designer first converts the code so it can be visualised. Then begins the manual work of recreating the individual elements of the seat, and adding the richness and depth that embodies the luxury and comfort of the actual product (2). 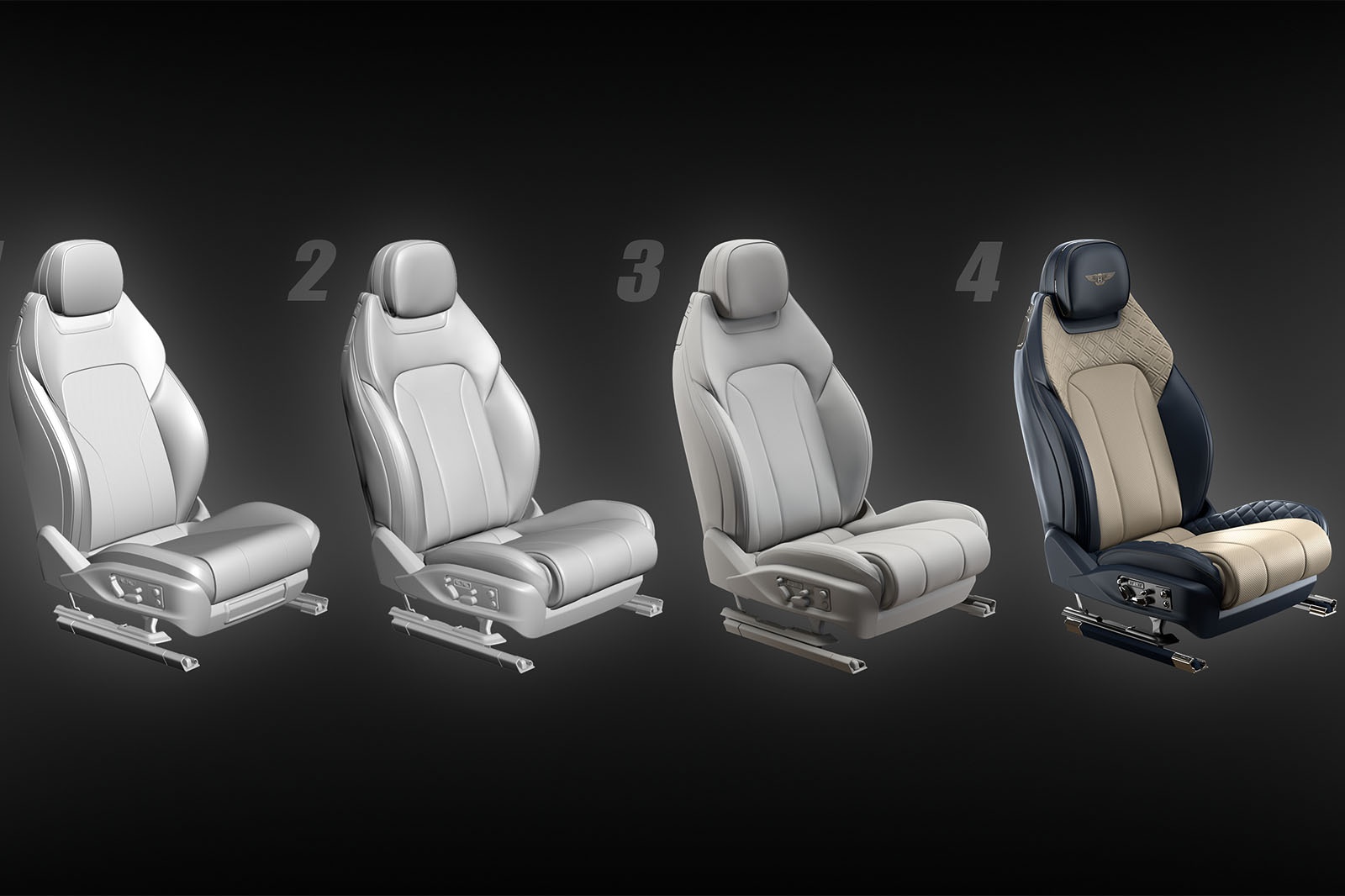 The image is then passed to the material and lighting artists (3 and 4), who recreate the actual materials used in the manufacturing process, producing an end product that oozes quality so good you can almost smell that Bentley leather.

23 December 2017
Good to see a small tech company being shown. However, if VW, Audi et al stopped with the stupid everything an option approach then we wouldn't need this! Instead they want to charge you for a lumbar support!

Good to see a small tech company being shown. However, if VW, Audi et al stopped with the stupid everything an option approach then we wouldn't need this! Instead they want to charge you for a lumbar support!

People who turn a positive into a negative suck the life out of the world.

Great read. Although I think the person typing the photo captions needs to check which model from the Bentley range he's writing about!