BACK TO ALL NEWS
Currently reading: New 992-series Porsche 911: mild hybrid and plug-in hybrid versions detailed
UP NEXT
Ford backs call for European ban on new ICE cars from 2035

Porsche has futureproofed its new eighth-generation 911 with a series of engineering measures that will allow it to support both mild hybrid and plug-in hybrid drivetrains during its planned seven-year lifecycle, according to its head of sports car development, August Achleitner.

Although the 992-series 911 will initially be offered with an updated version of the old model’s twin-turbocharged 3.0-litre flat six petrol engine, delivering 444bhp in both rear-wheel drive Carrera S and four-wheel drive Carrera 4S models, Achleitner has confirmed that development is progressing on a hybridised version that will provide the iconic sports car with the capability to run exclusively on electric power for limited distances.

“We’ve taken the experience we gained with hybrid versions of the Cayenne and Panamera, as well as the 918 Spyder, and applied it to the new 911," Achleitner said. "In the future, this will allow us to offer it with pure-electric capability.”

Despite its famously tight mechanical packaging, Porsche has successfully modified the rear-mounted drivetrain of the 911 to allow the housing of a disc-shaped electric motor within the rear section of its eight-speed dual-clutch automatic gearbox. 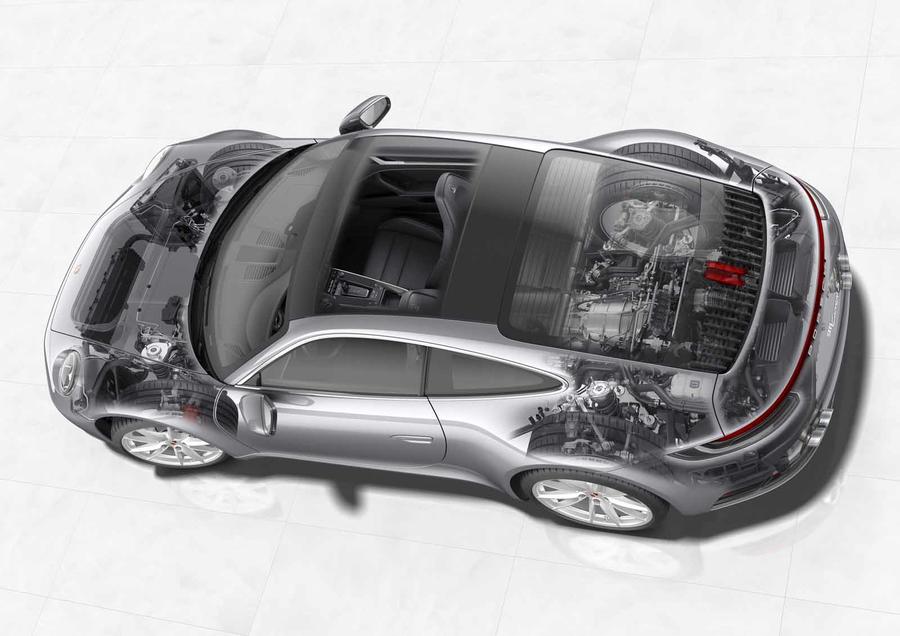 Key among the changes enabling this is a brand-new gearset similar to that already used by the second-generation Panamera and Cayenne. Achleitner, who is set to retire at the end of 2018, says the new gearset is almost 100mm shorter than the old one, providing space in the rear of the gearbox to house the motor.

As well as adopting a new gearset, the ZF-produced eight-speed PDK unit also has a higher torque rating than its predecessor at “over 800Nm [500lb ft]”, in a move that Achleitner says is necessary to allow the 911 hybrid to handle the strong torque loading of the motor.

The 911’s four-wheel drive system has also been reworked to allow up to 50% of drive to be apportioned to the front wheels. A further change centres around the brake booster. Similar to that used by the discontinued 918 Spyder, it forgoes the electromechanical operation of the previous 911's unit for a fully electric set-up. This allows a much more significant recuperation of energy, both under braking and on the overrun.

Achleitner wouldn’t be drawn on the specification of the petrol-electric hybrid 911, but he points to the Panamera S E-Hybrid as a performance reference. The more powerful of two hybrid Panamera models, this has an electric motor developing 134bhp and 218lb ft. This is combined with the 542bhp and 568lb ft of its twin-turbocharged 4.0-litre V8 petrol engine to provide an overall system output of 671bhp and 626lb ft. 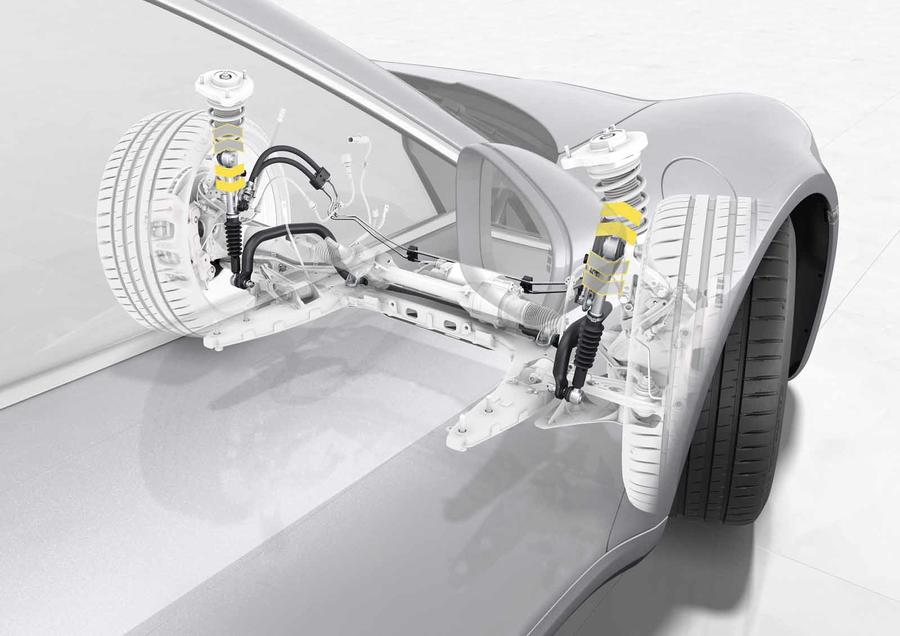 Applying the power and torque developed by the Panamera S E Hybrid’s electric motor to the new 911 Carrera S would provide it with a theoretical system output of 578bhp and 686lb ft – some 21bhp less but a significant 133lb ft more than the previous-generation 911 Turbo S. This model had a claimed 0-62mph time of 2.9sec and top speed of 205mph.

The battery used to power the electric motor in the 911 hybrid is expected to be housed within the front. Despite bringing added weight, this is expected to greatly improve the weight distribution of standard petrol engine-only versions of the new 911, which is put at 39:61 in the initial 1515kg Carrera S model.

The lithium ion battery used by the Panamera S E-Hybrid has a capacity of 14.1kWh, sufficient to provide the 2410kg five-door liftback with an official electric-only driving range of up to 31 miles on the old NEDC test procedure.

Another advantage brought by the adoption of a battery pack in the front of the 911 is a reduction in the centre of gravity. Nothing is official at this stage, but insiders suggest early 911 hybrid prototype mules feature a smaller fuel tank than conventional models, allowing the battery to be mounted low down within the car's front end.

Porsche going to stick it to the opposition again in this sector of Supercar?

'Another advantage brought by the adoption of a battery pack in the front of the 911 is a reduction in the centre of gravity.'
View all comments (4)