From £63,9136
New top-of-the-line Porsche hybrid, though fast and flexible, is simply too heavy to strike the same sweet sporting compromise as its siblings
Open gallery
Close

The Porsche Panamera Turbo S E-Hybrid is a car intended to change the monosyllabic reaction you tend to get the moment you tell people that the Porsche you’re running is a hybrid: “oh”. Not so long ago we ran a previous-generation petrol-electric Panamera as an Autocar long-termer, and I can still remember the lukewarm reactions it met with.

The reasons for that reaction are myriad, of course – and not all of them to do with model positioning. So what would it take, do you think, to turn that “oh” into a “wow”? Nearly 700 horsepower, perhaps? A sub-3.5sec 0-62mph time or a near-200mph top speed?

Wonder no longer. As part of a new strategy with its plug-in hybrid derivatives, Porsche is introducing one as the range-topping model in each of its ‘passenger car’ lines (Panamera, Cayenne, Macan – but not 911 or 718, rest easy). 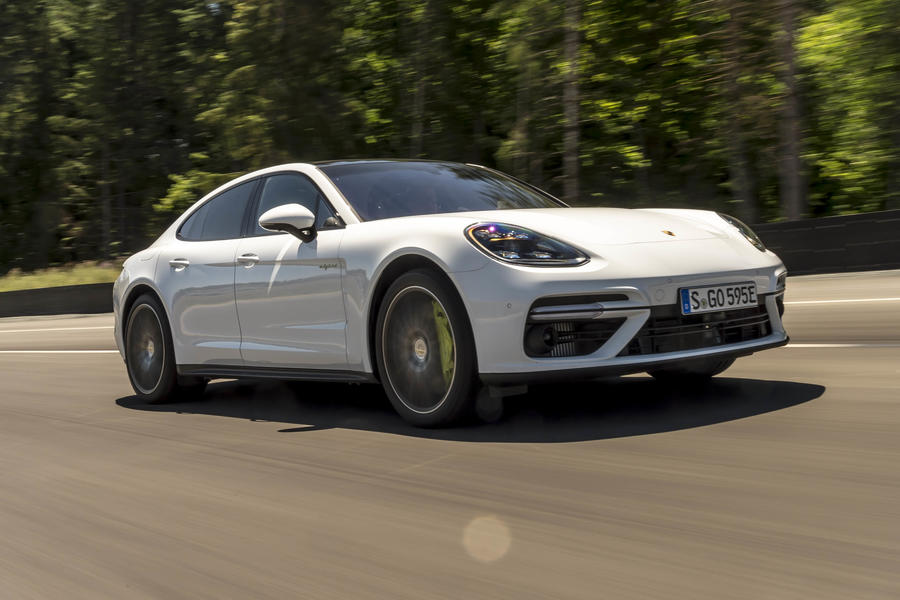 This new £140k Panamera is the first of them, and what it effectively does is to combine the 14kWh lithium-ion drive battery, 134bhp electric motor and high-voltage power electronics of the existing Panamera 4 E-Hybrid ‘PHEV’ with the 542bhp twin-turbo petrol engine of the Panamera Turbo.

The mechanical layout of the car (the electric motor is upstream of the gearbox) means the car’s eight-speed twin-clutch gearbox limits the car’s peak torque potential (which might otherwise have been in excess of 850lb ft). And yet you still can’t fail but nod in approval when you read this car’s vitals off the spec sheet; because 671bhp and 627lb ft from just 1400rpm seem like very healthy endowments for any four-seater GT.

Truth is, the expectations created by those numbers are like leaden wellies around the ankles of this car. Firstly that’s because modern plug-in hybrid powertrain systems don’t come without adding a lot of weight to a car - and they add more than 300kg to this one compared with the equivalent Panamera Turbo. That means the power-to-weight ratio only jumps by pretty modest 10%, and peak torque-to-weight actually falls relative to the Turbo - although accessible torque is obviously greater through most of the electrically assisted car’s operating rev range.

The Turbo S E-Hybrid does feel stronger and more responsive than its cheaper sibling out on the road, but much moreso through the lower reaches of the power band than when really revving. As you accelerate from low revs the car creates that almost instantaneous impression of ‘torquefill’ as the electric motor starts flooding the drive wheels with force - and often before your right foot has even come to rest at the bottom of the accelerator travel. Considering that it is operating at the limit of its load tolerance, the Panamera’s gearbox does a fine job of transmitting all that force, and of changing ratios smoothly and without delay in manual mode. 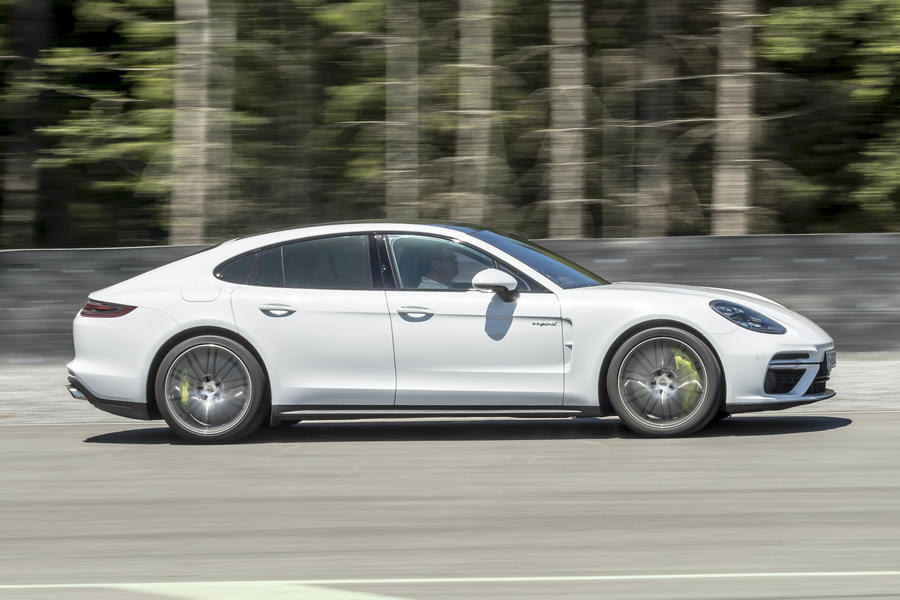 But neither the new Panamera Turbo S E-Hybrid’s ride and handling, nor its steering, are worthy of the range-topping billing they’re being given here, nor of the price that’s being asked for them. Placed behind the rear axle line, the car’s drive battery and power inverter quite plainly began to adversely affect the precision and security of its limit handling during our track testing. They also seemed to contribute to a more choppy ride and less composed vertical body control over uneven roads.

Additionally, the Turbo S’s steering is lighter, less feelsome and less confidence-inspiring than a regular Turbo’s – something contributed to not just by the excessive weight of the Turbo S but, we suspect, because it gets ‘PDCC Sport’ active anti-roll bars as standard, which certainly corrupt the sweetness of the Panamera’s rack in other derivatives we’ve tested.

Drive the car in the more relaxed style that ‘electric’ mode encourages, though, and you’ll find it more to your liking. On a full drive battery, zero-emissions range is claimed to be some 32 miles. It was a figure we didn’t have occasion to verify, but that would certainly make the car one of the more longer-legged PHEVs on the market between charges.

As standard, Porsche includes a haptic accelerator pedal which makes it easy to drive up to the performance limit of the car’s 134bhp, 295lb ft electric motor – and that performance is enough to make for respectable potency and drivability from town speeds up to about 50mph.

If you’re sold hook, line and sinker on the idea of a petrol-electric Panamera then this one’s a sizeable improvement on the existing V6 model, but it comes at a mighty cost. Early adopters of electrified cars will need no invitation to consider the quickest Tesla Model S instead, while those simply looking for the best four-seater saloon Porsche should simply save themselves £25k and buy a Turbo.

Considering the fact that this car even misses the sub-50g/km carbon emissions rating it would need to qualify for decent financial sweetners to ownership, it looks less and less likely to transform the standing of the Panamera ‘hybrid’ in quite the way Porsche may have hoped. 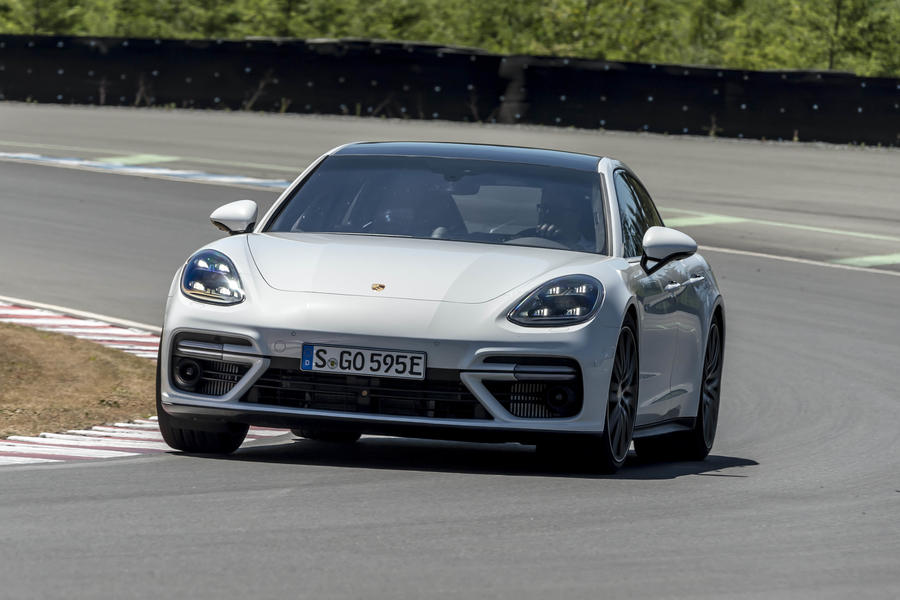 Log in or register to post comments
david230 15 September 2021
GotoAssignmentHelp is one of the most popular fields of study these days. Every year, thousands of students get admission in different fields of management in different countries. GotoAssignmentHelp provides online Assignment Help in all fields and sub-fields of management. There working procedure is quite simple, and any student in any part of the world can avail this My Assignment Help uk without any problem. Students can contact the help desk any time during these stages, Assignment Help London and as many times as they require to get status updates, and convey any new information
madmac 19 August 2017

Ridiculous weight and price! Only 4 seats.E63S low mileage examples are available for 80G! 57G less.E63S though not offically tested numbers wise AFAIK has been reported to get 0-60 close to 3.0 sec.Pointless Porsche,not worth it .

You could spend billions on that and perhaps you could do it the point is why would you and also waste a load of money same applies to this car.A bit of  a joke probably only made if it is zero company car tax, but then just get a mibni it would be more fun.