New-generation 911, on sale now, is intended to improve the breed without altering it
Open gallery
Close

Porsche has unveiled the eighth-generation 911, revealing a familiar shape and some evolutionary styling – but with a heavily revised range of six-cylinder turbo petrol engines that are more powerful than before.

The new 911 is available to order now in Carrera S and 4S forms equipped with a PDK gearbox, priced from £93,110 and £98,418 respectively. UK deliveries start next March.

The new Porsche is one of the biggest attractions at this week’s Los Angeles motor show. It adopts revised horizontally opposed six-cylinder petrol engines that feature a new fuel injection process for added combustion efficiency among a number of significant upgrades aimed at increasing its competitiveness against two-door rivals.

The turbocharged 3.0-litre units, which continue to be mounted in the rear, offer slightly more power than their predecessors. They can be mated to either a standard seven-speed manual or a new eight-speed dual-clutch automatic gearbox. 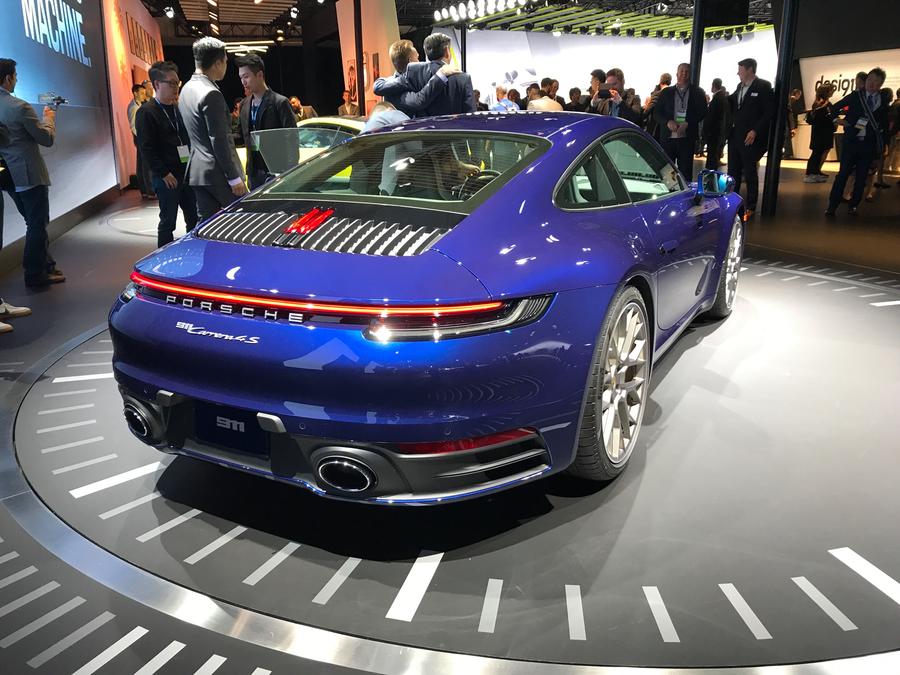 These times are shortened by a further 0.2sec with the inclusion of the optional Sport Chrono Package. This brings launch control, revised gearbox software that allows faster gearshifts and a sport response function for added performance. As a result, it provides the new 911 Carrera 4S with a 0-62mph that is 0.6sec inside the time of the old 911 Carrera 4 GTS, at just 3.4sec.

Known under the internal codename 992, the new 911 has been extensively re-engineered. It features a new platform structure with a greater amount of aluminium in its rear section, improving weight distribution. It also receives a revised chassis, which brings rear-wheel steering to both Carrera and Carrera S models for the first time in a move that, Porsche claims, provides the 911 with added agility and improved high-speed stability. 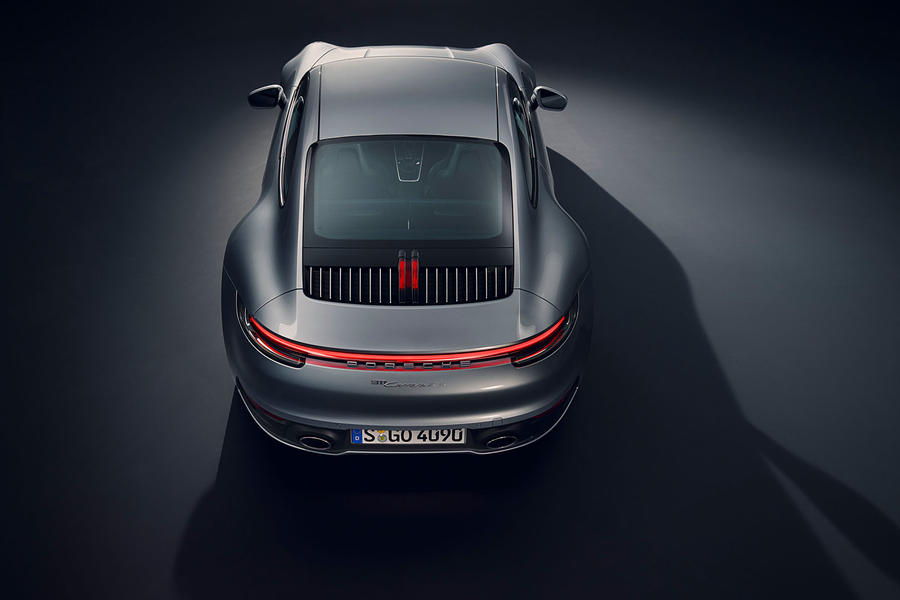 Stylistically, the new 911 continues the evolutionary theme that has characterised all of its predecessors since the introduction of the original in 1963. The 2019 model, pictured here in production guise for the very first time, is the second to be wholly designed under the guidance of Porsche design boss Michael Mauer, who also oversees the design activities for the whole of the Volkswagen Group.

Overall, the initial coupé model takes on a more muscular appearance, with tauter surfacing and added width to the rear wings. In a departure from tradition, Porsche has done away with offering two body structures in differing widths. Instead, it will provide the new 911 with one standard body that has rear wings described as being slightly broader than those on the wider body of the old 911.

Up front, a new bumper features a more prominent splitter element along its leading edge as well as a trio of larger cooling ducts. These are mounted outboard and feature three horizontal louvres, each to better channel air to the front-mounted radiators. Above the outer cooling ducts, Porsche has fitted new slimline LED driving lights that, like those of the old model, double as indicator units.

The 992 model also adopts a longer bonnet with more angular leading edges and a more defined indent through its middle section as well as redesigned headlights that have a more rounded shape than the elliptical units of the earlier 991-series 911. The new headlights, which feature matrix LED tech on some models, are mounted within visibly wider front wings with slightly larger wheel houses than before. The wing on the right continues to house the filler flap for the front-mounted fuel tank. 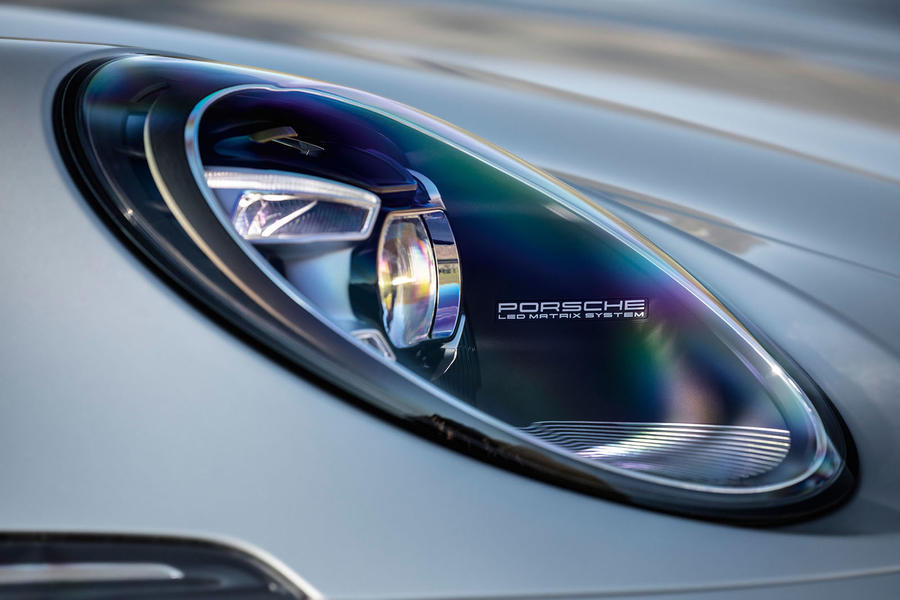 Further back, the exterior mirrors continue to be housed on frameless doors, but they have been restyled and enlarged slightly. The door handles are also new and now sit flush with the body when the door is closed for added aerodynamic efficiency.

Classic elements such as the comparatively upright windscreen and shape of the glasshouse have been brought over without much change. At the rear, there is a wider window with more rounded top edges than that used by the old model, a newly developed spoiler that deploys upwards to provide added downforce at speed and revised OLED tail-lights that, in a move mirroring other recent new Porsche models’, are now connected in the middle by a full-width LED light band.

Other changes include new Porsche identification, revised model badges that feature the 911 name for the first time and a more heavily structured rear bumper with a wide black valance cover that houses air ducts for the engine bay and large oval tailpipe openings.

Porsche has yet to divulge the standard wheel sizes but says the 911 will accept the same sized wheels as its predecessor, with 20in accommodated up front and 21in at the rear.

The new 911 is bigger in every vital exterior dimension, although the only confirmed measurement is a 45mm increase in its front track. However, officials have told Autocar that it has a slightly longer wheelbase than before for improved packaging of the interior and drivetrain. 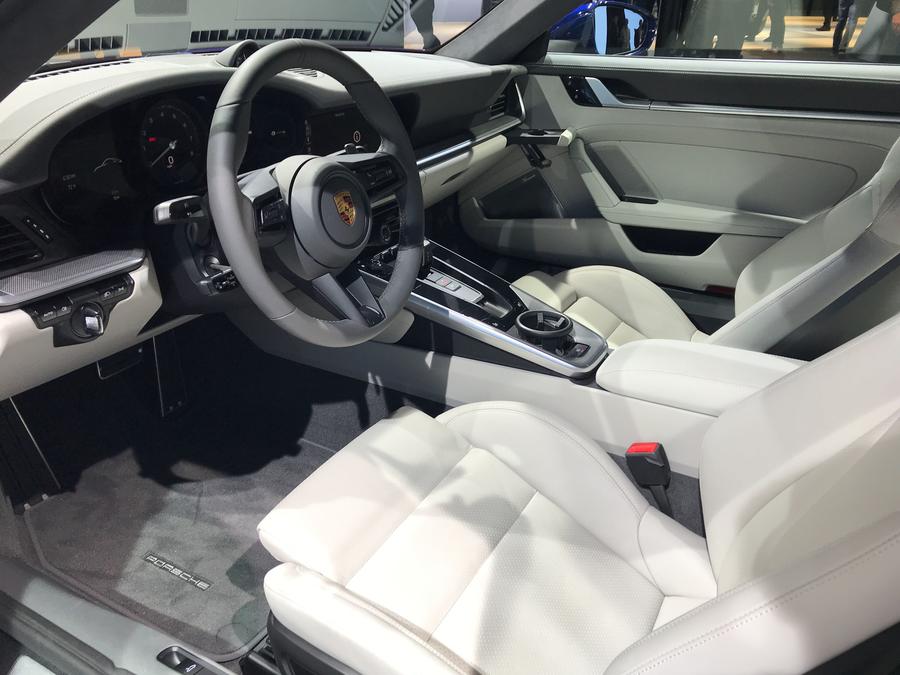 The cabin of the new 911 has received a more noticeable update than the exterior, with a dashboard that, Porsche says, has been inspired by that used by 911 models from the 1970s. It features a more angular design than today’s and comes with a new multi-function steering wheel equipped with the sports response rotary dial, allowing the driver to alter the car’s drive modes.

The traditional five-dial instrument binnacle receives a central analogue rev counter but digital displays for all other information conveyed to the driver. There is also a standard 10.9in touchscreen monitor within the centre of the dashboard for the Porsche Communication Management system. This groups the infotainment and other connectivity functions, including online navigation featuring swarm-based data, together in a central unit.

Between the driver and front passenger is a new centre console. It houses a newly designed gearlever, electronic handbrake switch and a combination of touch-based and toggle-style switchgear for ancillary functions. 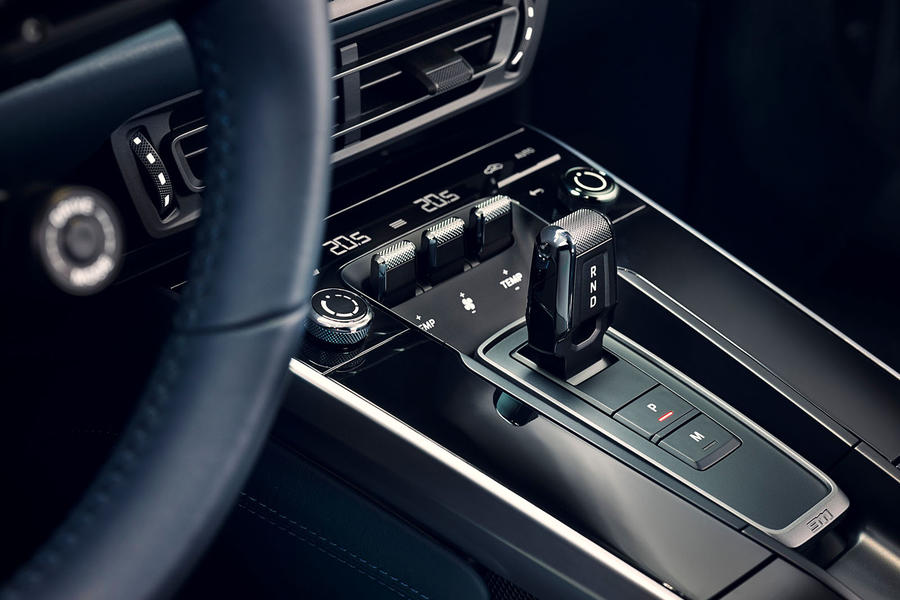 The adoption of a new 12V electrical architecture has also allowed Porsche to equip the 911 with a series of new driving assistance systems. These include a so-called wet mode that detects water on the road and calibrates the Porsche Stability Management system accordingly; an adaptive cruise control function with automatic distance control; night vision assist with a thermal-imaging camera; and a brake assist system that detects an impending collision and initiates emergency braking if necessary.

Other new functions include a trio of apps, which are being made available for the first time on the new 911. The Porsche Road Trip app is intended to help in planning, organising and navigating over selected routes. The Porsche Impact app lets you calculate the financial contributions to climate-based projects required to offset CO2 emission. Finally, the Porsche 360+ app is described as a personal lifestyle assistant.

Although Porsche has confirmed just one engine for the new 911 – the 444bhp turbocharged 3.0-litre unit used by the initial Carrera S and Carrera 4S models – Autocar can confirm that others are planned. They include a less powerful version of the flat six in price-leading Carrera and Carrera 4 models, as well as even more powerful variants in future GTS and Turbo models.

Porsche is also developing plug-in hybrid versions of the latest 911. However, they are unlikely to figure in the line-up until closer to a planned 2022 facelift, at which point the new model is due to receive a 48V electric system that supports not only part-time electric drive but also a new range of semi-autonomous driving functions.

Arriving in the UK in facelifted form early next year, AMG’s hard-charging GT range is Porsche’s prime competitor for all 911 variants over £100k. The newly turbocharged 911 GT3 will give AMG’s range-topping GT R a run for its money, while the 911 Turbo and GTS models will compete with lesser GTs. 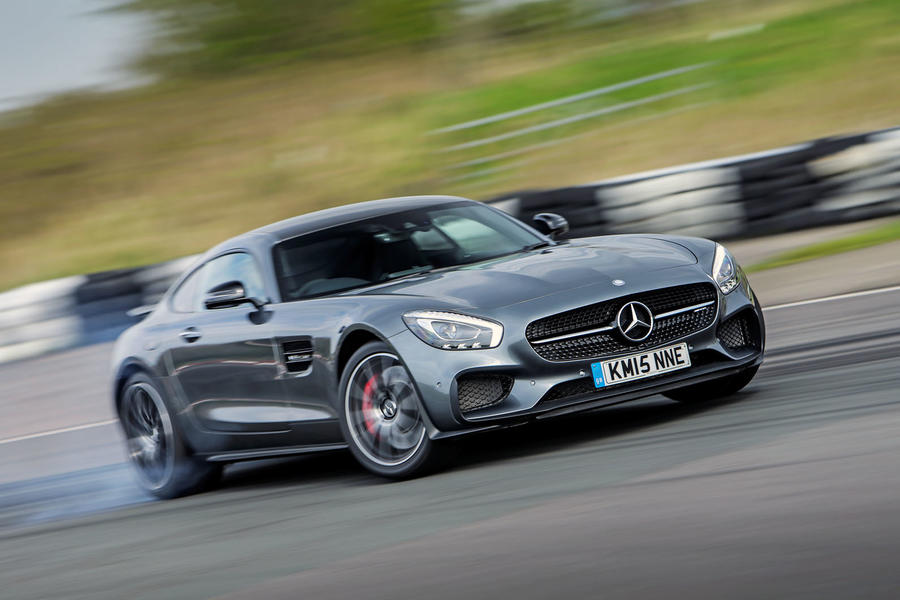 A new F-Type isn’t due until around 2021 and Jaguar is weighing up the idea of going all-electric. So the 992-gen 911 will be competing with the current Jaguar F-Type, recently updated for the 2020 model year. Although a four-cylinder entry-level F-Type undercuts the 911 range, the supercharged V6 and V8 versions have the character and performance to compete. 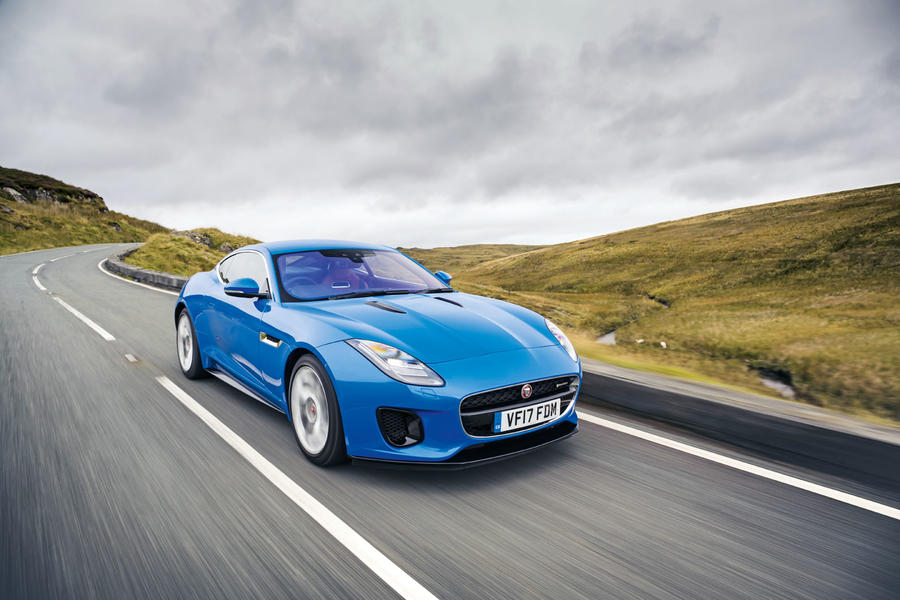 Higher-end 911s, such as the Turbo and GT3, will find stiff competition in the form of the recently facelifted R8. The ‘base’ model has had power from its naturally aspirated V10 boosted from 533bhp to 562bhp, squaring up neatly with the 911 Turbo, while the 611bhp R8 Performance should give even the fastest 911 variants a challenge from within the VW Group. 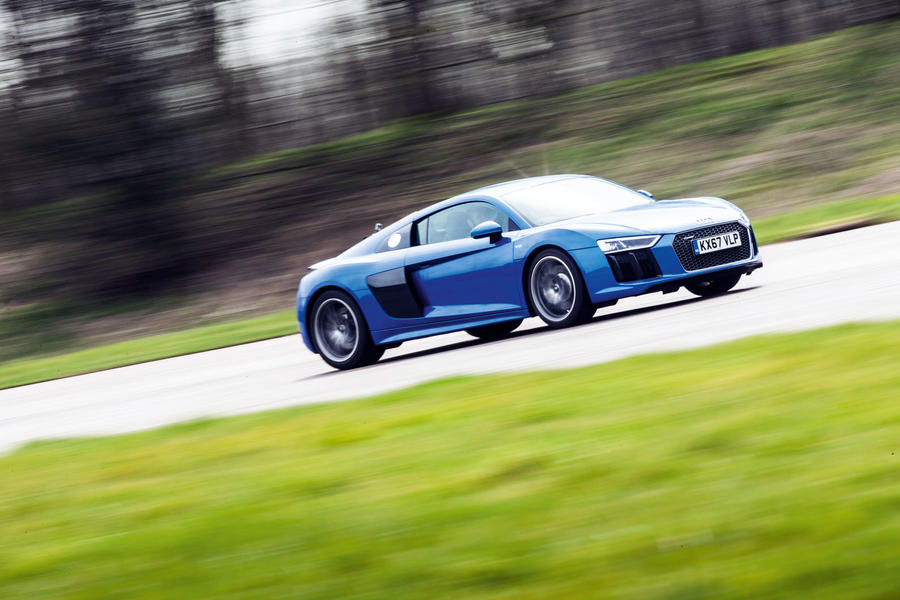 Aston Martin freely admits that its aim for the new Vantage was for it to be better than the current 911, but the 992 generation could prove the Brit-built sports car’s toughest test yet. With its £120,000 price squarely in 911 GTS territory, the Aston Martin Vantage impressed us at launch and will provide a fascinating head-to-head contest with the new Porsche. 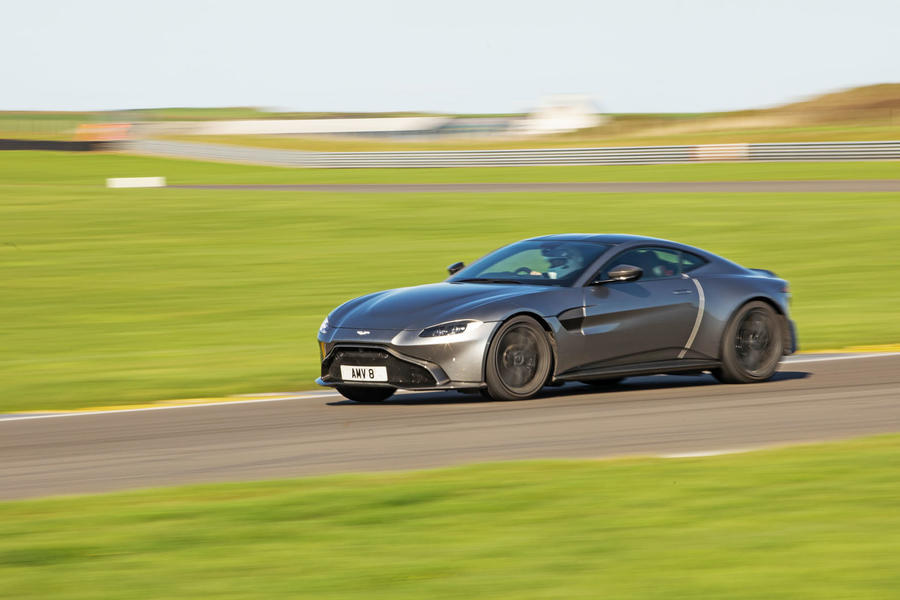 I really don’t know about this company website services. Because I like GoAssignmentHelp portal only for my all assignment writing tasks. With their

Assignment Writing Service Adelaide I got the superlative solution which is 100% error-free and 100% plagiarism free and I score excellent grades which are beyond my expectation.

Thank you so much for providing this.

The flush door handles aren't flush; it's certified to NEDC - what a gaff - surely someone at Porsche knew WLTP was coming?  It's not electrified, not even a tiny bit; and the rev counter starts in the wrong place.  No, sorry, Porsche, you've lost it;  or, should I say, no, sorry, Volkswagen, you've lost it.  And perhaps that last sentence is the reason.  A crying, crying shame.