BACK TO ALL NEWS
Currently reading: First ride: Porsche 911 2019 prototype
UP NEXT
Analysis: Why the decline in diesel sales has slowed in 2022

The same again, only better - that's the usual Porsche formula for creating a new 911. Is it the case this time?
Open gallery
Close

From the moment I caught sight of the new Porsche 911 parked in a lowly lit car park beneath the downtown district of San Francisco, the question that sprung to mind was not so much how it actually looked but, more important, how it drove.

The essence of this iconic sports car has always been its ability to deliver on the road in a way that few cars can claim to do, and as I stood there eager to jump in to this latest incarnation, the curiosity was killing me.

It was early morning when I joined the Porsche test and development team for the final validation tests of the eighth-generation 911 – the 992, as it is known to insiders. Never one to do things by halves, Porsche had brought along a fleet of prototypes: some Carrera mules, others Carrera S prototypes. Each wore some degree of disguise along their front and rear ends, although it was not enough to fool the keener smartphone-wielding enthusiasts who would later photograph us as we drove along in convoy.

The plan was to put the new 911 through its paces on a route chosen by August Achleitner, the project leader for the new car. The drive was to take us north through the city, out over the Golden Gate Bridge and on to some superb hill roads that Porsche regularly uses to hone its new models. 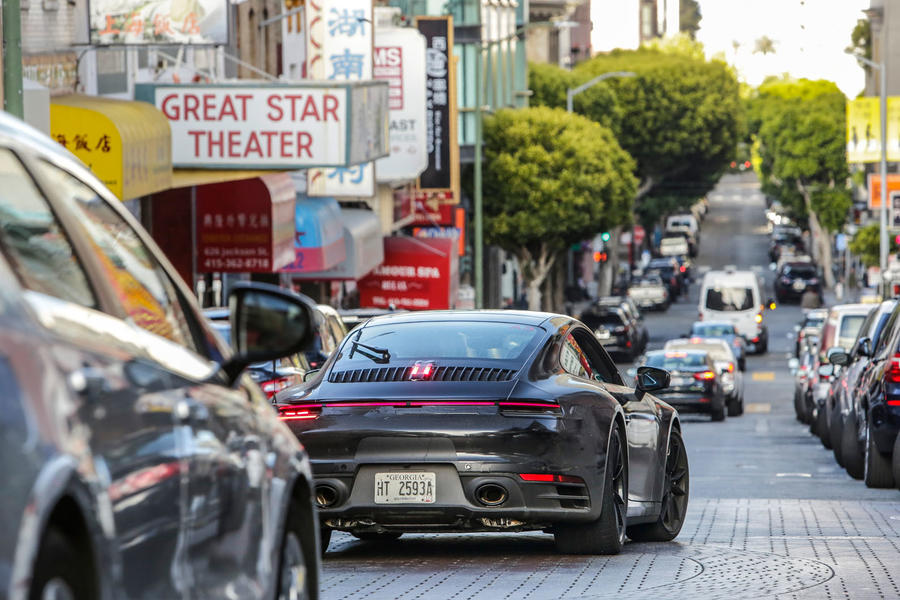 For Achleiter, it appeared an emotional moment. The quietly spoken German engineer has long presided over the development of the Porsche 911, and in more recent years the Boxster and Cayman, too. He has often been described as the keeper of Porsche’s holy grail. But although he’s looking fitter than ever, the 992 is rumoured to be his final project before he retires. Talking to him before we set off, I sensed a characteristic touch of pride but also a certain tinge of reflection in his comments on the new car.

“We know where we’re from and where we want to go. The decisive factor for me is that the 911 generates a driving feeling that no other car can impart,” he said. “The new model will be the best 911 of all time.”

The thing that really strikes you when you see the new 911 up close for the first time is just how close to its predecessor it is in terms of design. The key element, the lightly curved roofline, has been preserved to give the new model clear visual ties with every 911 down through the years. Sure, it has grown and, by all accounts, is more sophisticated than ever, but the basic look has once again been retained.

“Anything but contrived,” said Achleitner of the new look. “Even where the public might be expecting a bigger wow factor, in the long run, a certain aesthetic reserve pays dividends.” 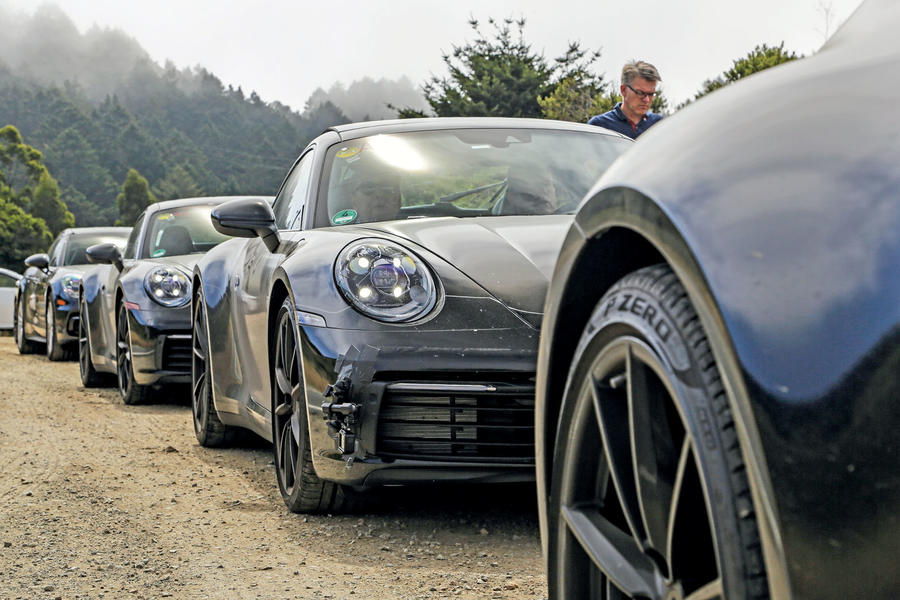 Porsche is keeping many of the technical details under wraps until the car’s planned unveiling at the Los Angeles motor show next month. That’s frustrating, but perhaps logical Porsche while the outgoing model, dubbed 991.2, is still on sale, I guess.

Even so, after a day out in the new 911, there’s a fair bit to tell. Like its larger dimensions, for starters.

Pedestrian impact protection regulations have forced Porsche to slightly lengthen the front overhang. This has led to a small increase in overall length and a mild alteration in its (still generously rear-biased) weight distribution. There are changes to the body, too. You’ll search in vain for a narrowbody model within the 911 range, though, as the new rear three-quarter panels are now exclusively wide-body items with even more pronounced rear haunches.

Elsewhere, the stylistic changes are predictably evolutionary. There are updates to the bumpers, headlights, door handles, mirror housings and tail-lights, which are noticeably thinner than before and connected by a full-width light band. The changes inside are even more significant, with the adoption of a new dashboard and centre console, as well as a further refined version of the 918-Spyder-style steering wheel that already graces today’s 911.

There’s also a new digital instrument panel, with only the centre-mounted rev counter retaining an analogue action. It is paired with a large central touchscreen that houses all the very latest in infotainment and connectivity functions. 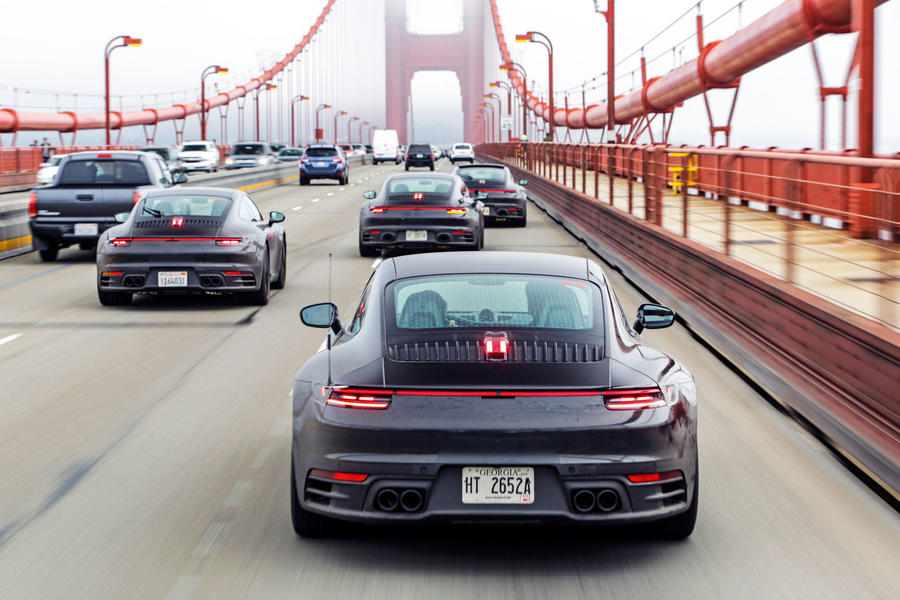 The turbocharged 3.0-litre horizontally opposed six-cylinder units, first pressed into action in the 991-generation 911, boast subtle changes, including a new die-cast aluminium manifold. If a long Porsche tradition of small but worthwhile gains in output for each new generation of the 911 counts for anything, we can expect a small increase in power to extend the output of the Carrera beyond 370bhp and the Carrera S to more than 420bhp. Additionally, torque should also climb beyond the 332lb ft and 369lb ft of the outgoing models.

The updated engines come mated as standard to a revised seven-speed manual gearbox but, in a more significant change, there’s now an optional eight-speed dual-clutch unit as part of efforts to extend both efficiency and performance. Despite the adoption of an added ratio, the gearbox from German specialist ZF is described by Achleitner as being more compact than the seven-speed unit it replaces to free up space for an electric motor in upcoming petrol-electric hybrid versions of the new 911 that Porsche already has under development.

Porsche has tweaked the chassis of the 911, too, giving it a marginally wider front track and wider front wheels as standard for added frontend grip. Achleitner also says there have been some detailed changes to the variable damping control system to provide greater low-speed comfort over high-frequency bumps.

Standard models retain conventional steering, although customers will now be able to option both the Carrera and Carrera S with the four-wheel steer system already made available on selected 991 models. 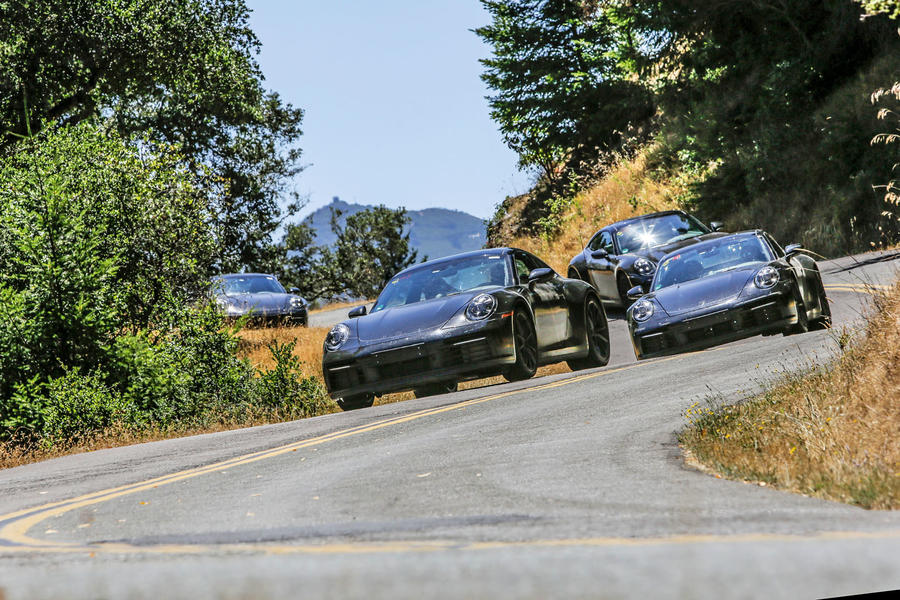 Did I notice any great difference in character and performance from the passenger seat? Around town, it was the solid low-end torque and superb tractability that grabbed my attention as we accelerated from one set of traffic lights to the next. It is not snarly or temperamental like some rivals at low speed. In fact, from the passenger seat, it feels as benign and well mannered at 20mph as it does hauling along at 120mph.

The new eight-speed gearbox, which receives a new gearlever as well as altered steering-wheel-mounted paddles, seems to shift more eagerly and smoothly than the unit it replaces. It is programmed to grab taller gears quite early in the interest of economy unless the driver is really nailing it, at which point it holds on to each ratio all the way to the redline to extract the best performance from the engine, which once again appears to be concentrated above 5000rpm.

There’s rabid acceleration under load in lower gears, so much so that I’d be surprised if the 0-62mph time of 4.4sec for the current dual-clutch gearbox-equipped 911 Carrera coupé is not significantly undercut by the 2019 model. The updated engine doesn’t give any hints of being a turbocharged unit at all. The sound engineering is superb, imbuing the interior with a near-precise replication of the original air-cooled engines of earlier 911 models, both at lower speeds and when travelling on more open roads. 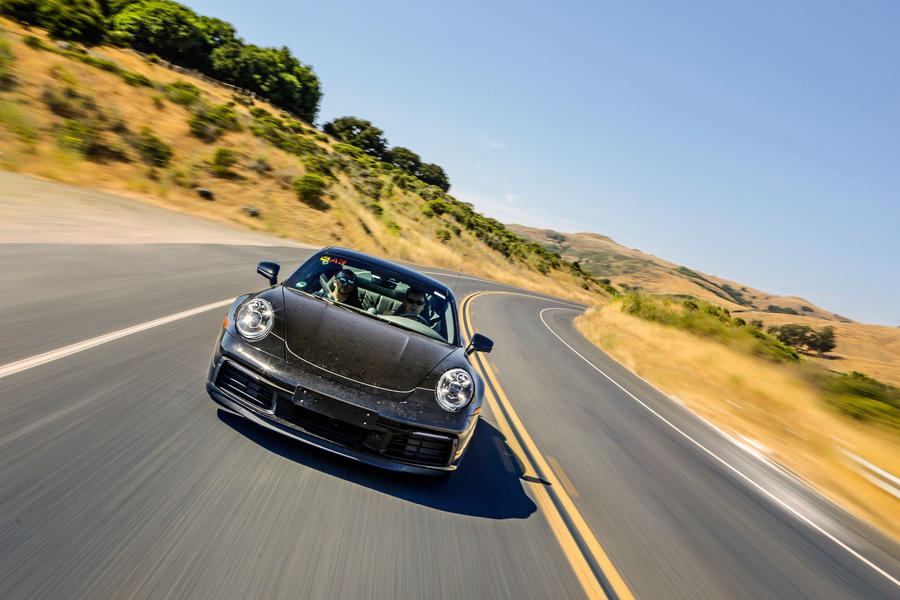 So, as expected, it’s more evolution than revolution for the new 911.

While it’s going to be hard to top the greatness of the outgoing version, the 2019 model brings some small but worthwhile changes that, from the passenger seat at least, suggest it could be even better still.

The History of the Porsche 911: a picture special

I'm concerned - as most commentators are here - that the 992 has even more Audi-derived infotech. Make mine an 'extended warranty' please, Mr Salesman.

The 991.2 proved the case that - for 'production-series' cars at least - staying at the bottom of the range was the closest you'd get to a purer driving experience rather than, say, a gussied-up Targa 4 GTS with PDK (....weighing around 1.65 tonne....gulp). Mr Preuninger's work for the VIPs & speculators, we'll leave unmentioned, of course.

Ditching the narrow-body cars speaks volumes, too (and not necessarily positive ones) about the latest 911-buyer demographic: hence the popularity of the aformementioned 'over-tinselled' Targa.....the Jenson Interceptor of the 991 range.

However, I note the aluminium manifold and the re-positioning of the exhausts/silencers: so, I'm hoping that Zuffenhausen has fixed the key defect of the 991.2: ie. the inability of Porsche (or any after-market company: we're taling about you Mr Akrapovic) to fix the PSE.

The 991.2 was the first 911 for some time that sounded 'purer' in stock Carrera form (with standard exhausts) than the PSE which (in my view) poorly confused 'volume' with 'sound' quality - though 'turbo-fizz' from outside is ineluctable on all 991.2 cars, PSE or stock, I'm afraid to say.

I was never really a fan of

I was never really a fan of 911's for many years. 2 years ago I was fortunate enough to ride shotgun in a new 911 GT3 round the TG track for the charity Supercar Day and oh my word, I am converted! Last year I went in a 458 Speciale at the same event (albeit at Rockingham this year) and that was very, very quick in a straight line. But overall the GT3 just had something about it and the adjustability on the limit that hugely impressed. It was the way it flowed from corner to corner and even though way less expensive than the Speciale, I'd still have it over the Ferrari!