BACK TO ALL NEWS
Currently reading: Insurers want access to autonomous vehicle data after accidents
UP NEXT
Y the obsession? The most prolific BMW Mini collectors

The Association of British Insurers (ABI) and vehicle safety expert Thatcham Research are pushing for new autonomous vehicle data laws, allowing insurers to view data after an accident involving a driverless car so they can determine where the blame lies.

Thatcham has proposed that data would be collected by the vehicle and made available to insurers, the emergency services and the vehicle manufacturer. It would reveal whether the car was in autonomous mode or not, how long it had been in its mode, provide a GPS location for the incident and show whether the driver’s seat was in use.

These regulations would require data from 30sec before and 15sec after the incident to be saved, to provide a clearer answer as to what happened and which car is to blame, helping to speed up the insurance payout decision process.

Thatcham Research CEO Peter Shaw said: “Future legislation needs to protect the consumer so that in the event of an accident, responsibility and who pays can be quickly determined.

“Was it driver error or a failure of the automated driving system? This can only happen if their insurer has access to key data about the crash. We would like to see car manufacturers and legislators working together with the insurance industry to develop a framework to make this happen.”

The ABI believes the manufacturer should be made to pay for damages if a faulty autonomous car causes an accident. It said this would help to reduce costs to the consumer, bringing premiums down. Volvo has already said it would adopt this approach with its first autonomous vehicles. “If you want to be in that market, you have to take that liability,” Volvo CEO Håkan Samuelsson said.

Autonomous car insurance will be the same as normal policies, says report 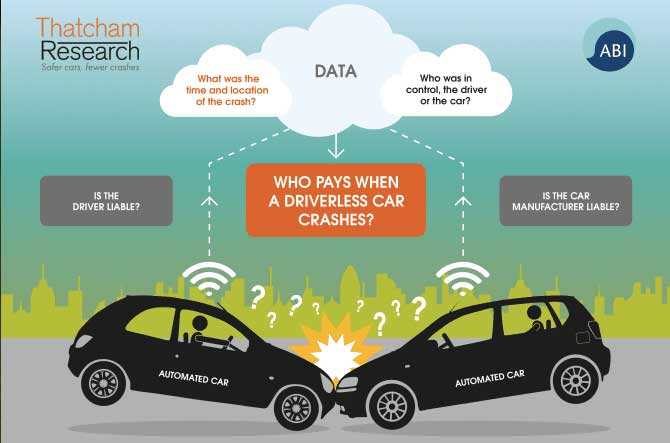 Speaking of the importance data sharing, Shaw said: “It’s in everyone’s interests to be able to establish the facts quickly and the proposals for standardised data being put forward by UK insurers would achieve this".

BMW: autonomous driving is 'many, many years away'

Huw Evans, ABI director general, added: “As part of insurers’ commitment to getting automated cars on the road and dramatically improving road safety, there will need to be basic data easily available to make sure customers are looked after if something goes wrong.

“This would offer public reassurance by protecting motorists from being incorrectly blamed if something fails with their car, helping police investigations and supporting prompt insurance payouts.”

The data collected by cars won’t, however, include how it is being driven, suggesting that to determine the speed, control inputs and reactions of a driver in the moments leading up to an accident, methods employed today will still have to be used.

Thatcham and the ABI are hoping to influence the UN body responsible for vehicle regulations, which is preparing to reveal its own data requirements of vehicle manufacturers from 2019.

“Insurance is an increasingly innovative sector, constantly responding to evolving technology,” continued Evans. “We have created new ways for people to manage their motor insurance via their smartphones, and a service to collate people’s pension savings online is in development. Insurance enables technological advances in other sectors, and we are backing the development of automated cars 100%.”

Vehicle safety is very important for a vehicle owner, therefore, to prevent damages and to protect the vehicle, we are taking several kinds of beneficial steps. Vehicle insurance is playing a crucial role in vehicle safety issues and with the help of vehicle insurance, we can easily recover the amount we spend in the vehicle damage. Here from this article we can get a new concept that what steps should be taken to get data of an autonomous after accidents. Thanks for this wonderful point.
bowsersheepdog 22 November 2016

Why is this even a question?

If fully autonomous cars are introduced then surely the owners would no longer need to have insurance, since any accident is the fault of the car, and therefore the manufacturer, and theft should be impossible as the car would refuse to go anywhere without being authorized by the central control as a result of a request for permission by the owner. Okay, I suppose a few quid a year to cover against a tree falling on it in a storm, but that's about it. Any other necessity can only be an indication that these despicable machines are not all they are bummed up as being.
BigZoot 22 November 2016

I hope manufacturers dont see this as an opportunity to build in a "cheat device". Meaning if an accident occurs the system quickly changes the info to show the driver took control. Would be a good way of not getting the blame!
View all comments (5)