BACK TO ALL NEWS
Currently reading: Hydrogen is key for meeting emissions targets, says Hyundai
UP NEXT
New Audi S3 Sportback and Saloon arrive with 306bhp

Hydrogen powertrain technology will be vital for car makers to achieve ever-tightening emissions targets in the future, according to Hyundai research and development boss Albert Biermann.

The industry is racing to develop electrified technology to cut the average CO2 output of its car fleets to meet new European Union (EU) emissions targets – and those targets are due to get progressively tougher in order to meet the Paris Agreement goal for the EU to reach net-zero carbon emissions by the midpoint of this century.

While there has been a major push towards battery-electric technology lately, there has also been a resurgence of interest in hydrogen fuel cell powertrains in recent years. Hyundai has invested heavily in the development of hydrogen tech for cars, such as its new Nexo, and for commercial applications including buses, lorries and ships.

Mercedes-Benz, BMW and Audi have also increased their investment in the technology, while Toyota recently revealed the second generation of its Mirai.

Speaking about the challenge of meeting ever-tighter CO2 targets at the Fuel Choices and Smart Mobility Summit in Tel Aviv, Israel, Biermann said: “We are fully convinced that, to meet the 2050 CO2 targets, without hydrogen it will not be possible to get there. We started hydrogen development 20 years ago and we’ve not stopped since. We know it can be very helpful to fix a lot of issues, and with the right sustainable power source, it’s very clean and very green.”

Biermann, who was recently promoted to become Hyundai Motor Group’s president of research and development, in addition to his duties running the Hyundai N performance brand, underlined that the firm currently offers mild hybrid, hybrid, plug-in hybrid, electric and hydrogen fuel cell vehicles. He said: “these technologies will coexist for quite some time, and it’s hard to tell right now in which areas which technology will be the best solution and find customers.”

Hyundai has invested in upping its production capacity of hydrogen fuel cell vehicles to 40,000 per year, matching Toyota’s latest projections, and has a plan to continue scaling up from there. Biermann said it has sold its full allocation of 1500 hydrogen cars this year and is aiming to at least double production output every year henceforth. 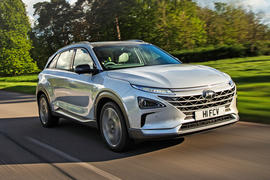 I would have thought it a journalistic responsibility to mention this, rather than just highlight again that Autocar as a publication is not supportive of BEV's.

Hydrogen "better than batteries, but then again it's not"

15 November 2019
Every downside to battery EVs (BEV) that you berate is actually the SAME downside that you list as the downsides to hydrogen BUT you still rate hydrogen better. Weird!
For at least 40% of Britons they'd charge a BEV at home. I no longer spend 10minutes per week refueling in a filling station stepping in diesel spillages and having to pay, no, I spend 5 seconds per day plugging my car in at home. It even heats itself up before each trip. We'll leave aside the source of the hydrogen - I know that all of my electricity is green.