BACK TO ALL NEWS
Currently reading: Britain's best affordable driver's car: Audi RS3 versus Mercedes-AMG A45
UP NEXT
Hope for Bloodhound LSR project as sponsor talks start again

It's a mega-hatch grudge match between the Mercedes-AMG A45 4Matic and the Audi RS3 - which of these two delinquents will come out on top?
Open gallery
Close

I get the sense that these two can’t quite leave each other alone, like two playground rivals who bitch and scrap but secretly rather love each other, only dare not admit it.

Mercedes-AMG’s first foray into transverse-engined, front-biased drivery gave us the A45 AMG. It squeezed 2.0 litres and 355bhp, via only four cylinders, into a package that still felt decisively AMG-ish and special. And it arrived being quite fast, a bit front-wheel drive and very German in a segment where someone else was already making a good living out of being quite fast, a bit four-wheel drive and very German. So when Audi brought out the RS3, pulling the hair of the AMG as it went by, obviously it had seven horsepower more than the Mercedes from its five cylinders. Naturally, then, AMG tied Audi’s shoelaces together, revised the A45 and gave it 376bhp.

And now, one of the reasons we’ve assembled this test in the first place, is because Audi has revised the RS3 yet again, been rude about AMG’s mum, daubed its phone number on the toilet wall (you won’t get what it promises if you call it) and gifted its own offering 394bhp.

Yes, dear reader, the world has now given us the 400-metric-horsepower hot hatchback, because simply having a little more power than a Lamborghini Countach LP400 is never enough for a five-door hatch. It needs to have a lot more. Don’t you agree?

Well, even if you don’t, here we are, in an Audi RS3. It has a nice interior, does the Audi. Which is  no surprise; they always do, don’t they? Solid, austere, functional, with highlights pulled from the big book of hot hatchback clichés: aluminium bits here and there, some Alcantara on the flat-bottomed steering wheel, figure-hugging seats, you know the score. Of course you know the score. It’s an exercise in corporate box- ticking. There’s probably a checklist. Mercedes-AMG uses a similar one, only with a more upright seating and driving position, more Alcantara on the wheel and more metalised plastics on the diddy gearlever (you’ll end up using the gearbox paddles in both quite naturally). There’s an interesting material on the dash – a ‘technical grain’, I suspect they’d call it, but it’s like carbonfibre-meets-sail makers’ fabric. Elsewhere, things are notable for their predictability. 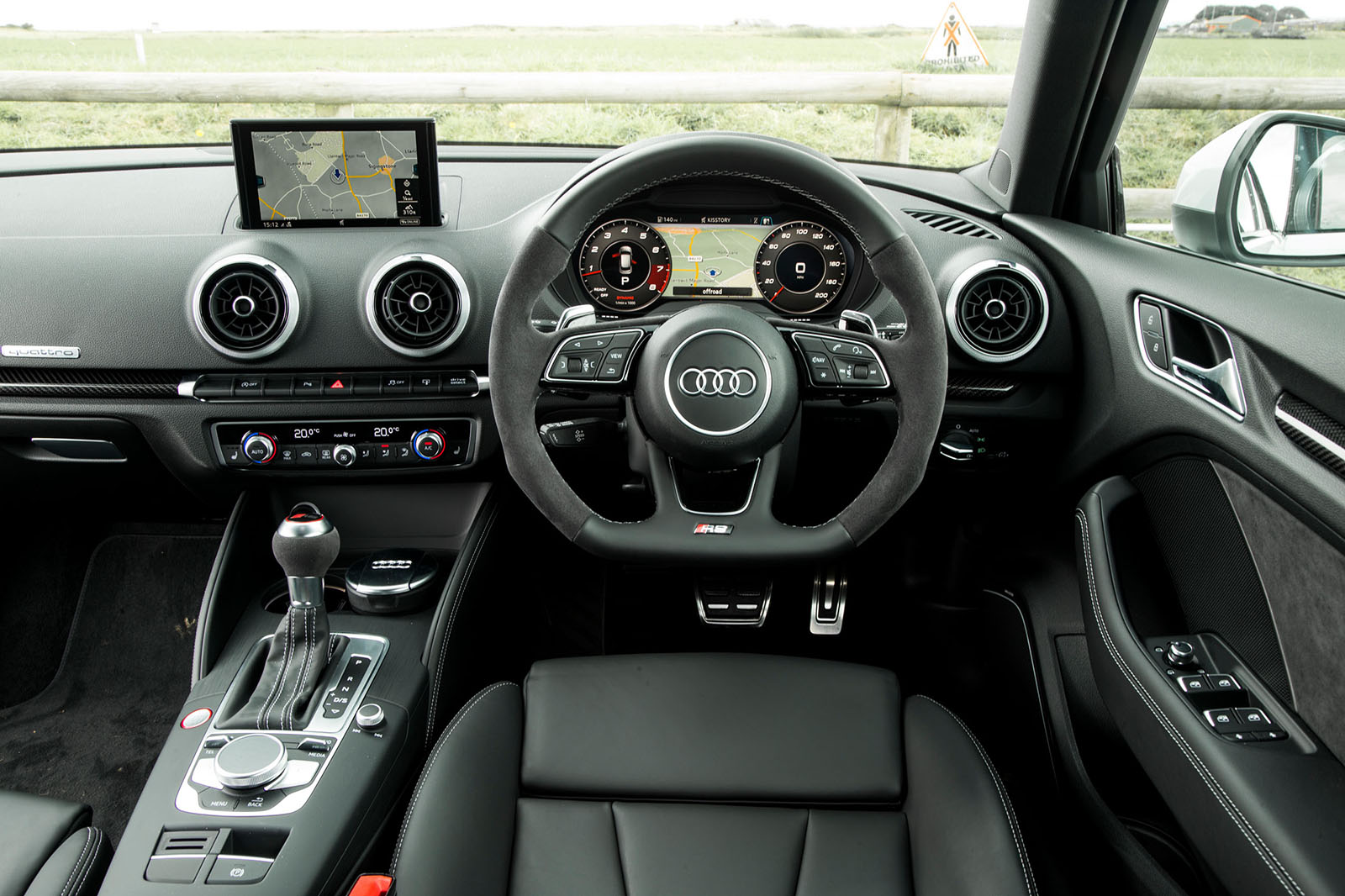 So far, then, so expected. But what’s this? You can have an Audi RS3 on adaptive suspension but this particular example doesn’t have it. Interesting, but not, I suspect, a bad thing. A well sorted passive damper is a thing of wonder.

So, too, is a 2.5-litre five-cylinder engine. The world should have more of these; one day it’ll have none. In the meantime, this one makes its near-400bhp in surprisingly relaxed fashion. Because it has a turbo, there’s a wholesome 354lb ft that joins you from only 1700rpm and hangs around until 5850rpm, at which point peak power arrives and stays on side until 7000rpm.

Obviously it’s quicker if you have 354lb ft in second gear rather than in third, but the short of it is that the Audi’s wheels are getting a big old wallop of twisting force either way. 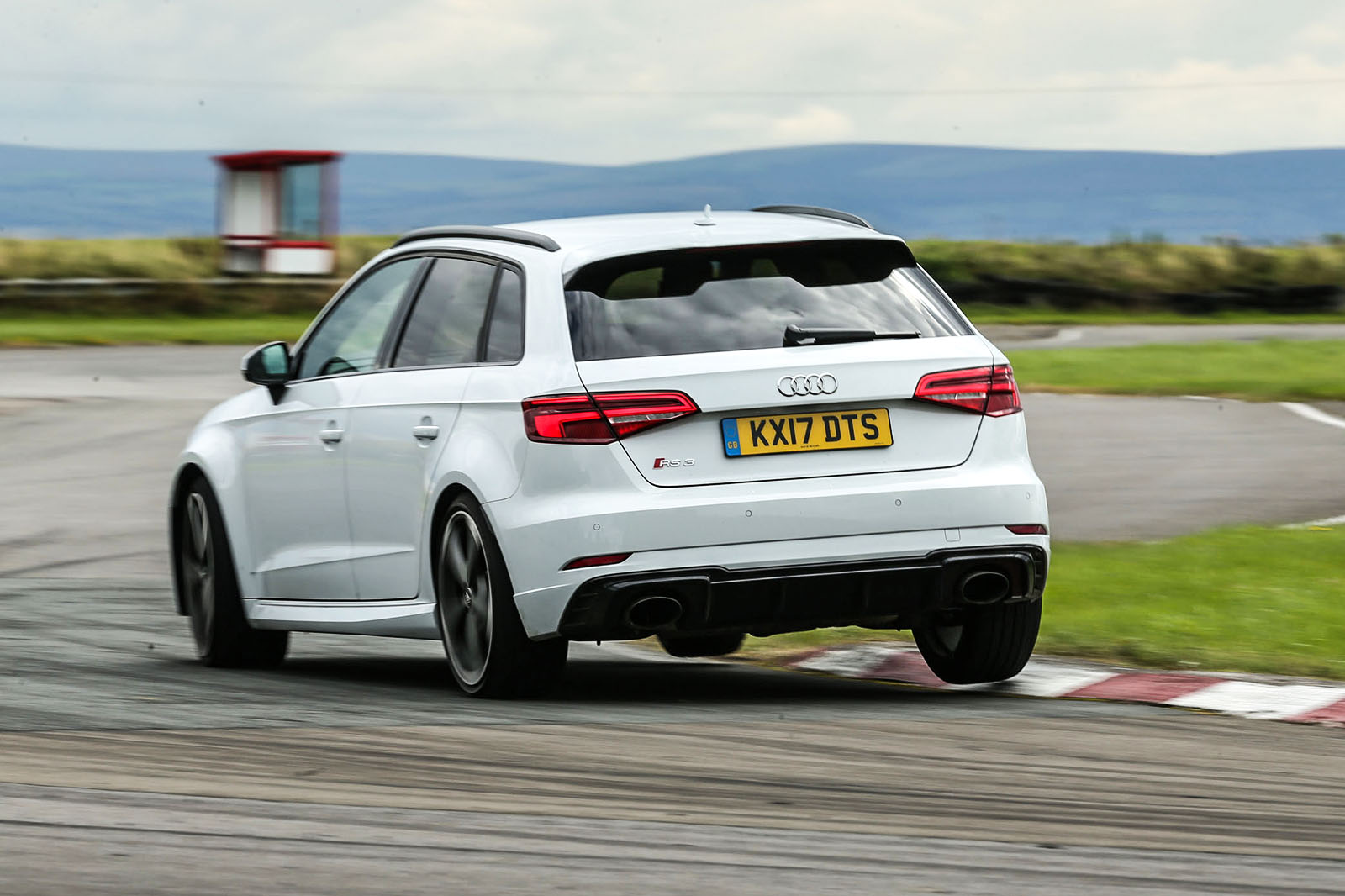 That means it’s fast. I still remember the first time a Ferrari we figured dipped below four seconds in a 0-60mph sprint. We had to warm the tyres but cool the clutch, and then, after we’d tested it, technicians would plug in a laptop and see how worn the clutch was. Today, Officer Saunders engages launch, steps off the brake and finds the RS3 will hit 60mph in 3.9sec all day long. We are, be in no doubt, in the company of a hell of a quick road car.

It’s faster than the A45, I don’t doubt. The headline figure isn’t so different – the AMG’s 376bhp peak is on offer at 6000rpm. You have  to wait until 2250rpm for the full 350lb ft to arrive, but that’s the nature of the beast. The AMG gets by with a 2.0-litre four-pot, so it’s natural that it has to work harder – and therefore you have to work it harder – to get comparable figures.

But there are flipsides to that, too. A 2.5-litre engine, despite Audi’s latest round of changes meaning a move to an aluminium block that makes it 26kg lighter than before, ought to be heavier in the nose than the AMG’s 2.0-litre lump, which is also down on cylinders and capacity by 20%. And so it feels. 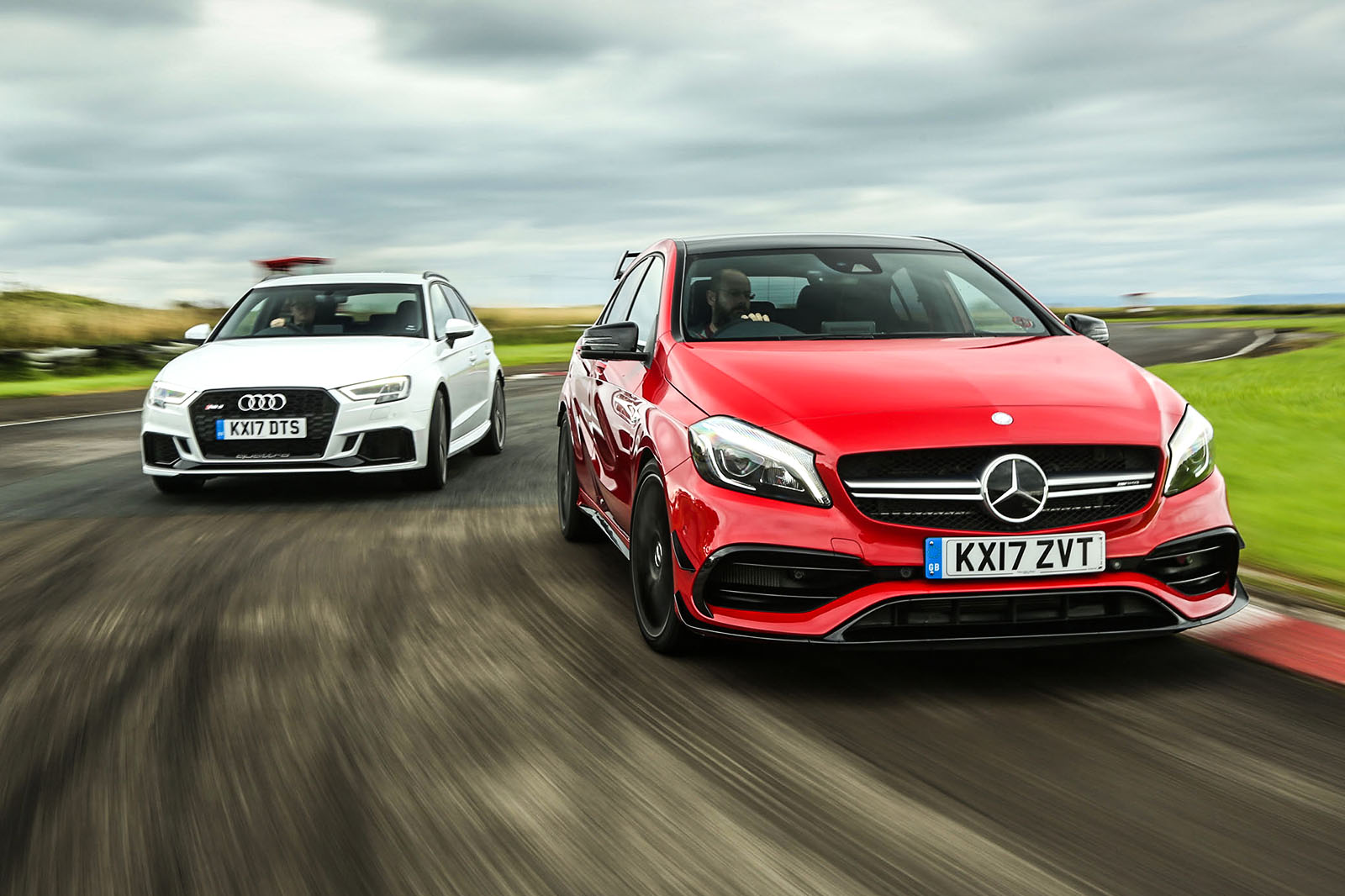 Don’t think I’m down on the Audi, in the ‘oh, it feels like a fast Audi’ way, though. There is an evident and ever improving edge of dynamism to the smallest RS model. When Quattro GmbH (now Audi Sport) first released the RS3, the people there talked of how the four-wheel-drive system would get ready to push torque to the rear on corner entry,  so your exit had a more controlled, less understeer-focused line. Taking extra weight out of the nose has only improved that stance further, so on a circuit the RS3 has shattering grip levels and more traction than  its engine can overcome the vast majority of the time. If it’s damp and you set it up right, it’ll slide with almost neutral lock applied, a foursquare drift of mild understeer. But it’s urgently fast.

On the road it’s the same, only you’re less likely (obviously) to get near its limits, because they’re simply so vast. The passive dampers, though, don’t do too much to dispel the idea that fast  Audis have wooden chassis: the ride is fine on good roads but too firm on bad ones. Cabin refinement, though, is exceptional.

It’s on the road where an AMG A45 shows it has the better moves. Its suspension breathes more easily and it responds to wheel inputs more keenly. The stats say there isn’t much in it when it comes to kerb weight, but the AMG – as well it might – feels more agile and more willing. Albeit with more noise, more crackle, more overrun pops, less overall refinement.  On the road the AMG, too, has unimpeachable limits but on a circuit displays a touch more adjustability than the Audi – although neither is anything like as lively as, say, a Ford Focus RS. The numbers say the Audi is faster around a track, but the AMG is the more engaging car. And on the road it’s the more fun car, too. It feels that bit more special. 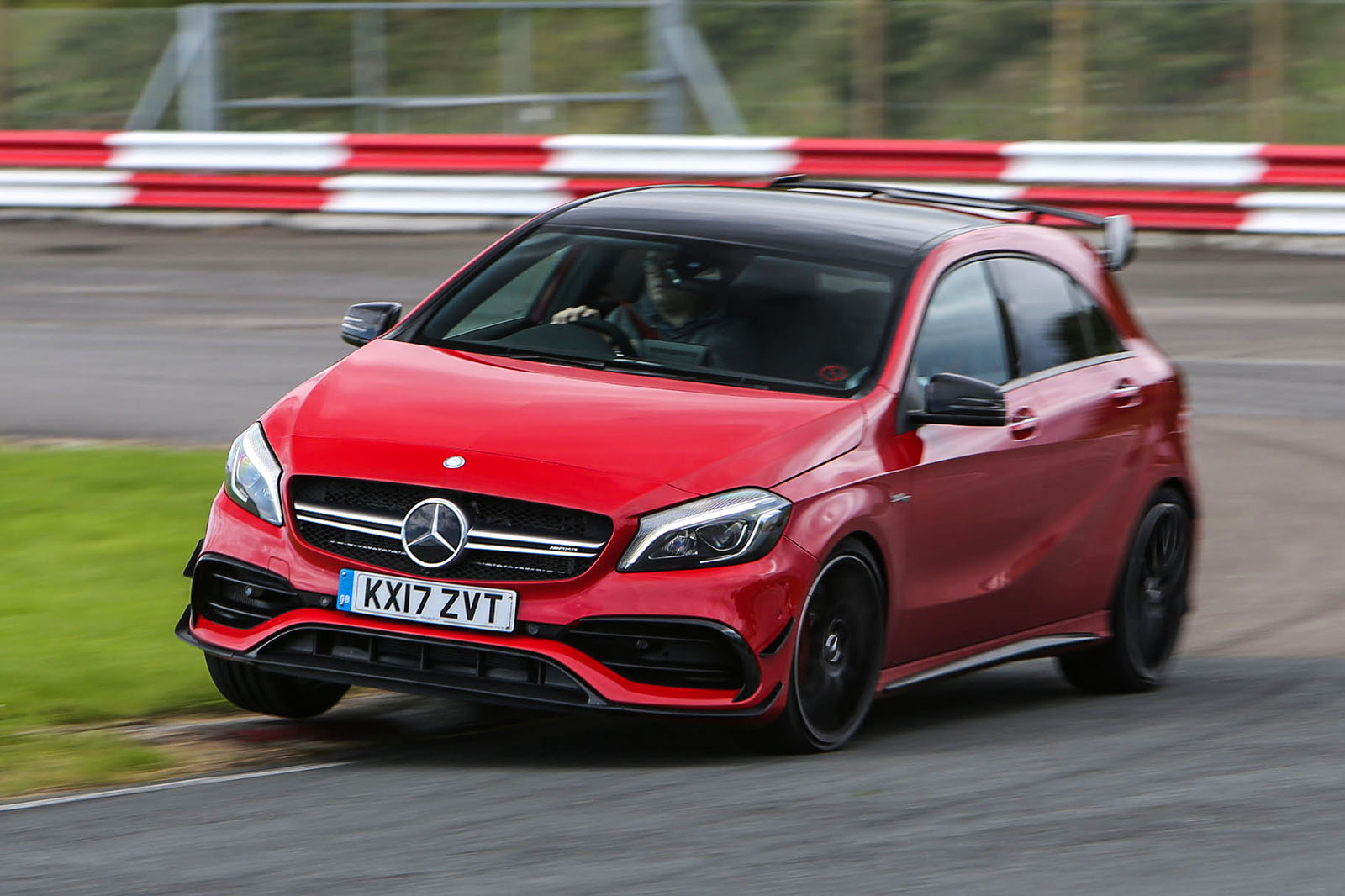 Which is what it takes to swing the result the Mercedes’ way. Were this a test of everyday cars, the Audi’s cabin solidity, ambience and refinement might seal it. But this is, after all, a test of driver’s cars, and while the Audi might be preferable for most Monday to Friday, only one would do on a Sunday morning.

Audi has made some useful improvements to the balance of the RS3 by taking some weight out of the nose and revising how the four-wheel drive system works. The car feels a touch sharper as a result, but frustratingly it still reverts to understeer at the limit in dry conditions. 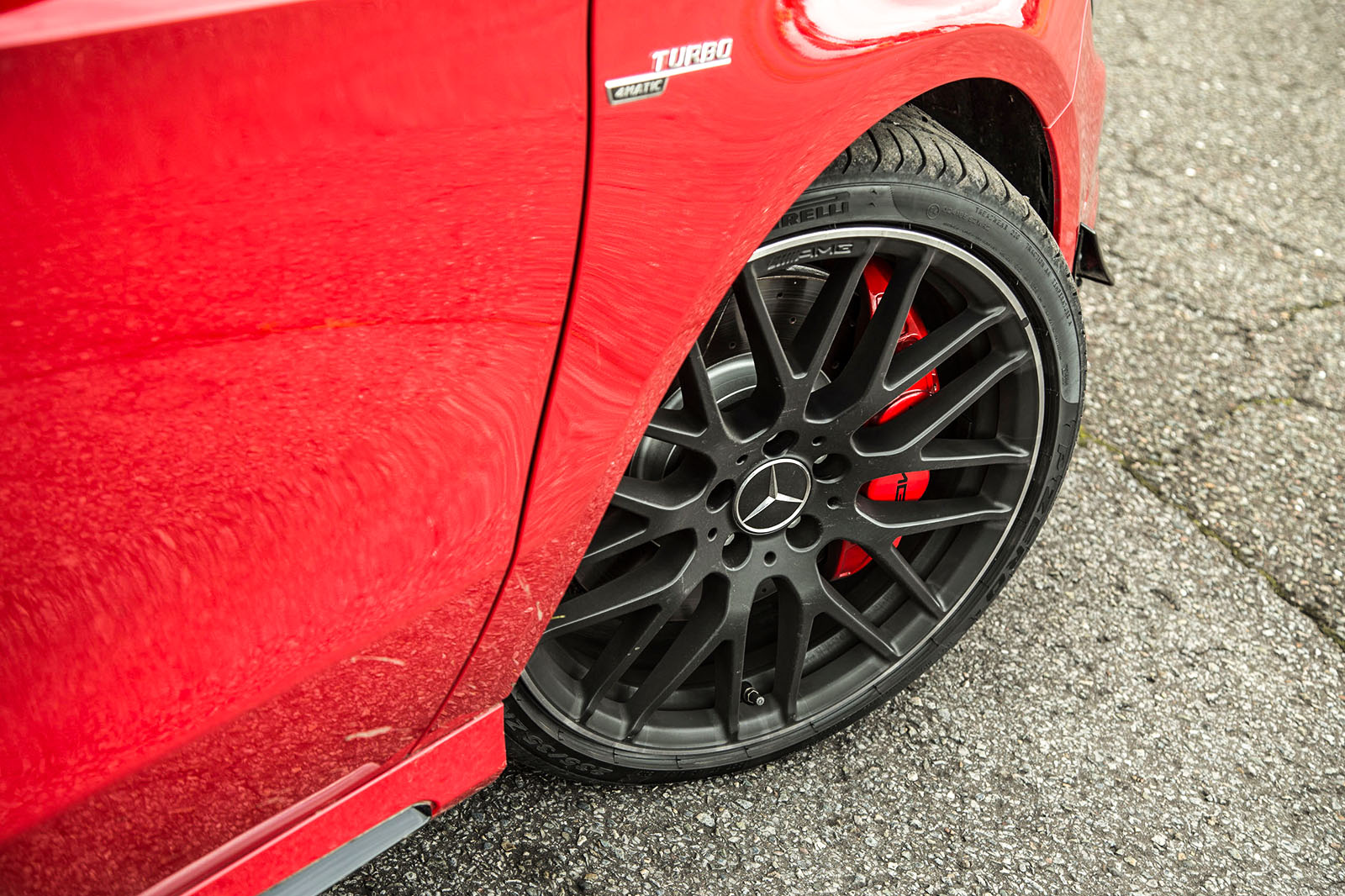 Feels like a junior AMG should: agile and engaging, with a poppy, zingy engine 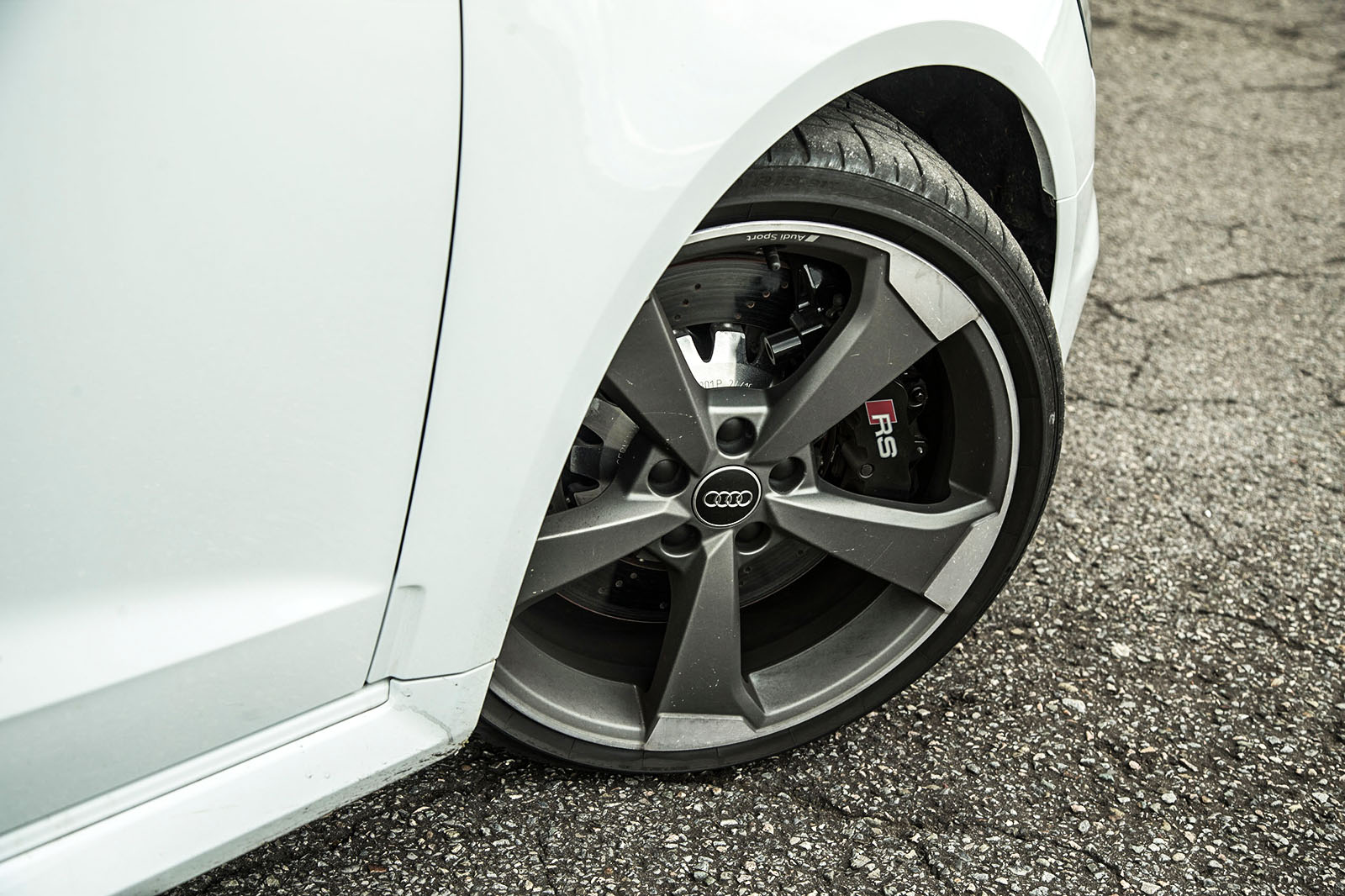 The better everyday car, but this test is about more than that, so the AMG steals a march on it

I think yer space bar is on its way out, Matt!

At those prices, not for most people.