BACK TO ALL NEWS
Currently reading: Sim-ply the best: Virtually driving a Ford GT endurance racer
UP NEXT
Hope for Bloodhound LSR project as sponsor talks start again

The gap between testing real cars and using simulators is vanishingly thin. In the first of a two-part series, Matt Prior tries a state-of-the-art sim used by Ford Performance
Open gallery
Close

I think the first time I used a car simulator that felt half-realistic was at McLaren, when it was developing the MP4-12C, in 2011.

McLaren had two at the time. One was pounding virtual Formula 1 race tracks but the other had also been set up so it could aid development of McLaren’s road car.

Back then, using a simulator was still a novelty for a lot of car makers. Today, hardly any would be without one. Or two. Or more. They save time, they save money and, fundamentally, they make race and road cars better. Or at least they should do. 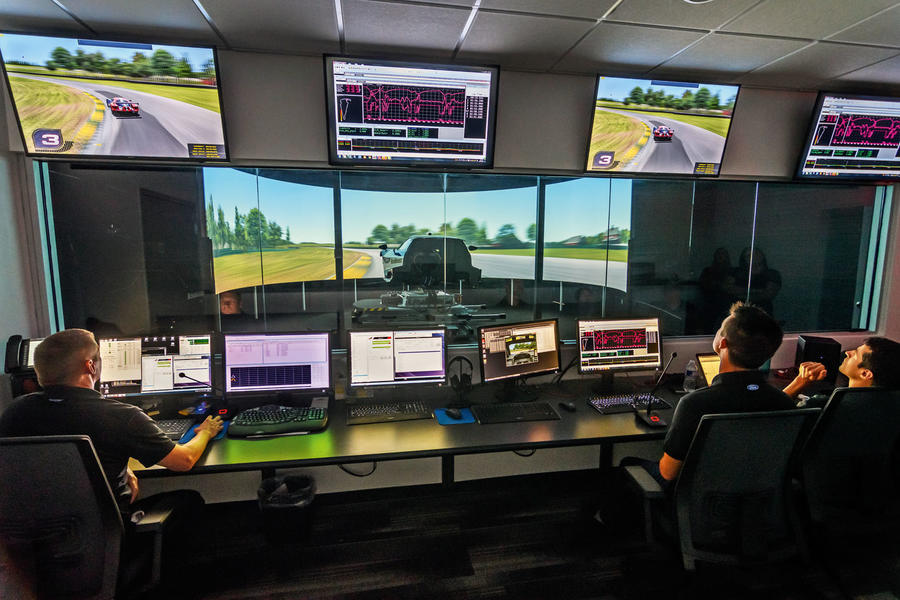 In 2011, Chris Goodwin was McLaren’s chief test driver and oversaw what the simulator was doing. Now he’s doing a similar role for the development of the Aston Martin Valkyrie. The McLaren simulator’s physics software was good. In F1, the differences between simulated laps and what happened when the car got to a circuit was within a tenth of a second. “What happens in here is exactly the same as what happens in the real car,” Goodwin told us at the time.

But the way the simulator told the driver what was going on was quite different from the sensation of a real car. “Once you’ve learned what each movement and feedback means, you start to get it,” Goodwin said.

I sense that, in the simulated world, much of the eight years since have been spent reducing the difference. The key to a great ‘driver in the loop’ (as in, a person is using it) simulation is that it feels like the real thing. And while the physics get more accurate still, and more advanced software lets engineers model ever more factors, the best sims are ones that make you feel like you’re actually there. 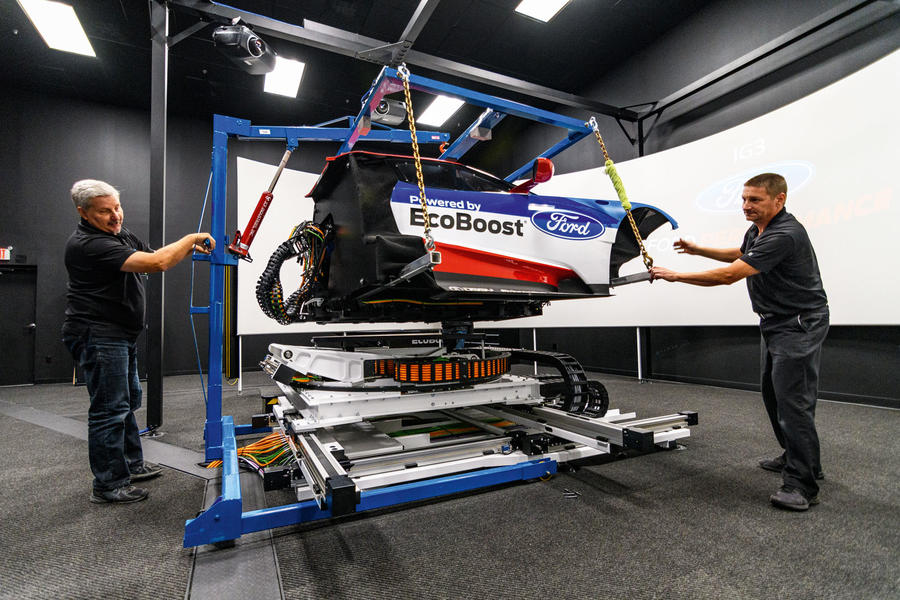 And herein lies the problem. The earliest simulator that I, and perhaps you, saw was for aeroplanes. It was on The Krypton Factor (ask your parents) and it was in a pod, as flight simulators often still are. They sit on a ‘hexapod’, an arrangement of rams that gives plenty of degrees of movement, but, usually hydraulically powered, they’re slow to respond and, other than giving you an angle of lean, can’t maintain a g-force.

Which is fine for an airliner, because if you’re sustaining a big g, things probably aren’t going well. But imagine trying to replicate the g-forces of a car going through a fast corner. Take Monza: you’d need a pod travelling on rails and, while they do exist – usually for truck simulators – to sustain a big g-force, a simulator would have to be on rails that are, well, the size of Monza. Which isn’t helpful. Besides, if you’re in a pod, you rule out easily changing the actual cockpit – and, increasingly, car makers like to sit drivers in simulators that have a realistic environment so they can test ergonomics.

So they want a simulator that can fit inside a room, in which one cockpit can be craned off and another dropped on, and which yet feels like it’s moving, without making the driver feel sick – a big problem with early simulators.

Those are the challenges. I’ve been to a couple of places that think they’re at the cutting edge of the answer, and both are in the UK.

Cranfield Simulation began making flight simulators for fighter jets and had to solve an issue: how do you make fighter pilots feel like they’re pulling big forces for anything up to minutes at a time? A pilot’s own equipment sparked the answer: in flight, they put on a g-suit, which inflates to stop them passing out. Inflate the suit, then, or in a car the chair or seatbelts, in the right places at the right times and you trick the mind into thinking that acceleration is matching what you see on screen. Hard right cornering? Inflate the left of the seat. Hard braking? Pull the seatbelts hard. 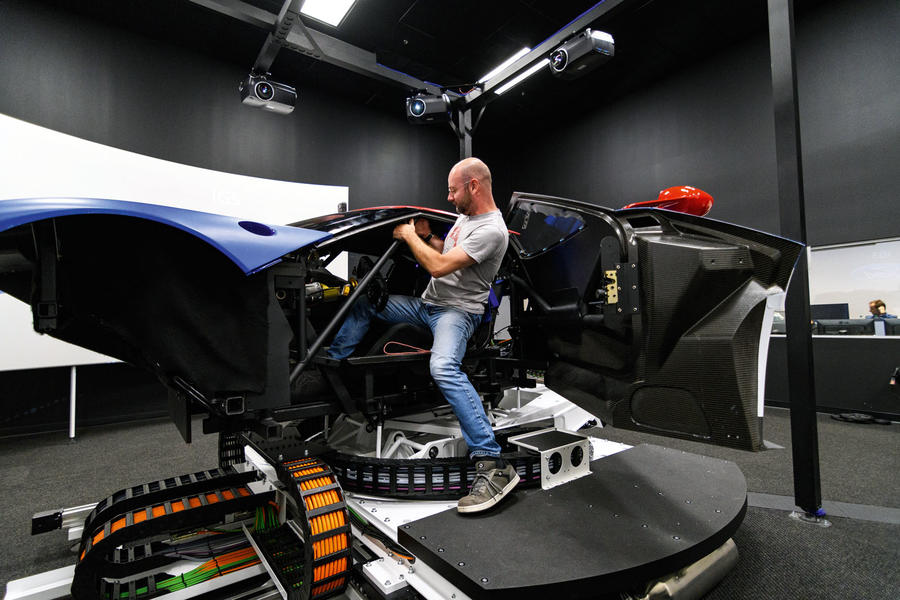 I’ve used a Cranfield simulator and it works brilliantly for driving on track. They combine it with other technology, too, such as high-frequency movements to replicate kerb hopping or eye position changes (if you’re braking hard in real life, you slip in the seat and your view changes), a ‘yaw platform’ that gives cues to stepping over the limit and a suspension platform that pitches, rolls and heaves. I was hooked.

Ansible Motion, based at the Hethel Engineering Centre round the corner from Lotus, is arguably even more advanced. As with Cranfield’s, you can pick and choose from a small limited-movement simulator to an all-singing, all-dancing one, but Ansible’s sings and dances like nobody else’s. Its range-topping Delta-series simulators have up to 13 axes of motion – the primary six (surge, sway, yaw, heave, pitch, roll, if you’re counting) and then others up to and including helmet loads. And they’re servo operated, not hydraulic. Trouble is, high secrecy and confidentiality mean nobody likes to say who the firm sells its simulators to.

Until you walk into the Ford Performance Technical Center in North Carolina, which develops Ford’s racing cars, where they have two of them, in two massive rooms. Mostly, they’re used for racing, in everything from concept development through to having two Nascar drivers on the same oval. Who makes the simulators? “Ansible Motion,” says Ford Performance’s director, Mark Rushbrook. 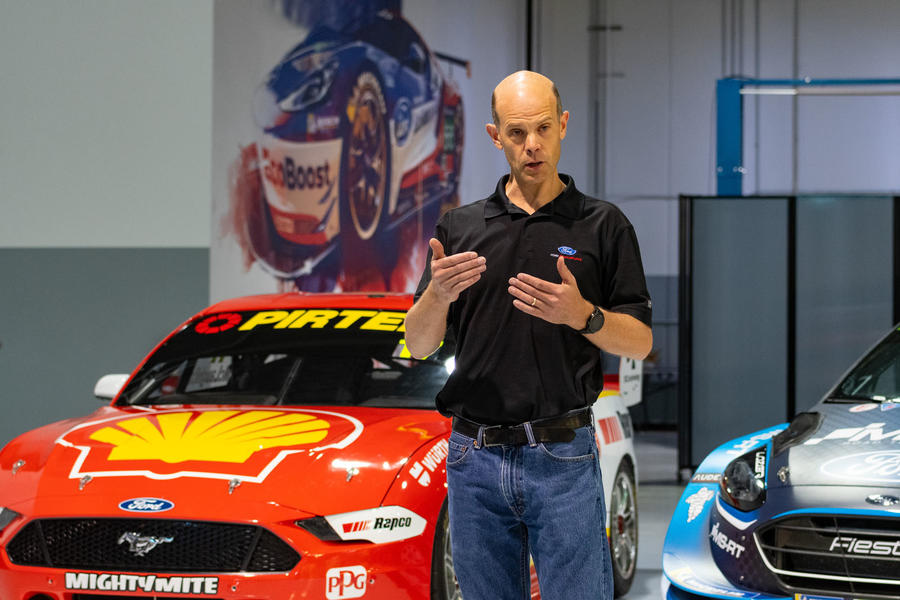 They’re in use all the time. “We thought one was enough,” says Rushbrook. “Then we thought two was enough. And now the product guys are in there all the time, too, so maybe we need a third.”

For road car products, the simulator is easily as useful as it is for racing. Sims are expensive. Nobody will say exactly, but let’s call it a couple of million quid for a good one. But if you can make one less prototype and save £15m, it’s worth every penny.

And it’s not just the prototype cost, as Billy Johnson, Ford test driver and GT racer, says: “It might cost $200,000 to take a car and six engineers to the Nürburgring. Here, they take a flight to Charlotte from Detroit and drive a GT500 road car on six of the world’s great race tracks in a day.” 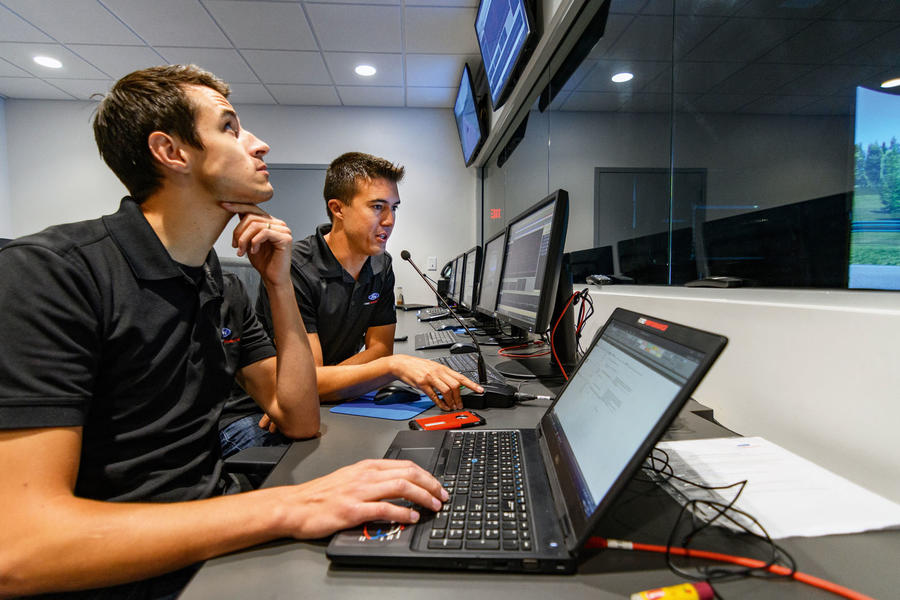 The modelling is so good – most simulators I’ve come across are running rFpro software, but the hardware will run all sorts – that ride and handling set-ups brilliantly replicate the real thing, and today what you feel in a simulator is much closer than it used to be to what you feel on the road.

So they say, anyway. To find out, I’m strapped in and will drive a Ford Mustang GT4 car and then a Ford GT race car, on a circuit I don’t know.

The sensation is exceptional. The cars are loud, the GT4 bounces as it might given it’s a heavy old front-engined thing, and the lower GT and the stability offered by its downforce mean it’s an easier drive, even though it’s much faster.

It feels pretty authentic, with the possible exception of braking. You get an initial motion when you hit the brake pedal but, between that point and turn-in, there’s a curious dead zone where your mind expects cues to match the visuals but doesn’t always get them. Conversely, on a straight, you’re sometimes mildly aware that the sim is returning slowly to centre, to wind off the motion it gave you in a previous corner. But it’s so close to the real deal that every kerb, every slip into over- or understeer is telegraphed and I’m hooked. As authentic as real driving? Here’s the thing: in next week’s magazine, in a real Ford GT race car, I’ll find out.

What about gaming sims? 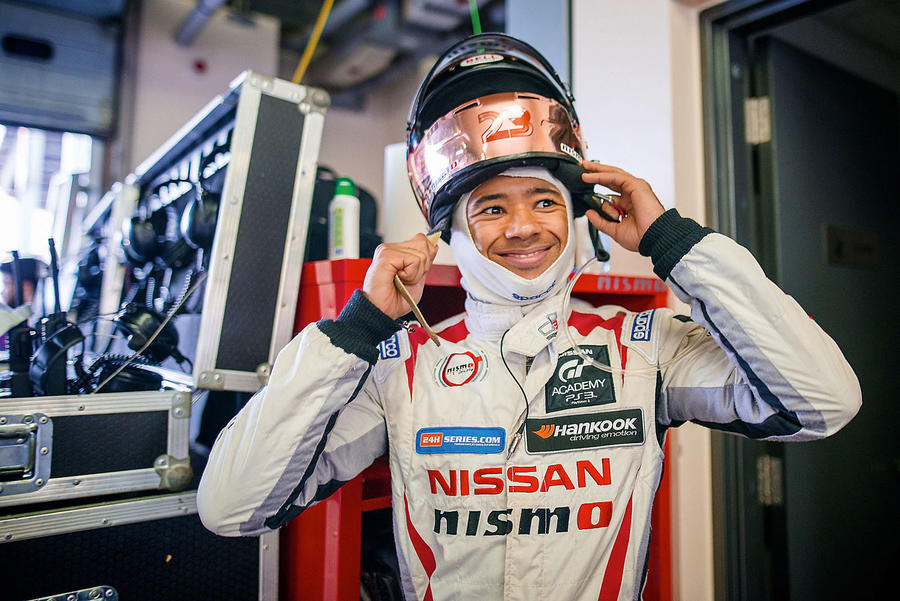 It’s easy to find people who are a bit sniffy about gaming simulators compared with industrial-type simulators like these, but they’re mostly trying to do a similar thing: make it feel like you’re driving a real car, when you’re not.

Some games telegraph what a car is doing in dramatic or delayed fashion because you’ve no real feedback. A simulator might tell you that a car is about to oversteer via motion cues, but a games console might not, so it tells you in other ways.

But it would be naive to think there’s no relationship between the two. More gamers play with rFactor than engineers use rFpro simulation software, but both are based on the same ‘engine’.

Besides, as Nissan’s GT Academy and World’s Fastest Gamer have proven time and again, you can give drivers thousands of hours of great practice in games, which translates to the real world where they end up on the podium at Le Mans.

Aerodynamics: why virtual testing is better than a wind tunnel