BACK TO ALL OPINION BLOGS
Currently reading: Ferrari SP2 Monza: First ride in ultra-rare speedster
UP NEXT
Opinion: Is stripped-down BMW M4 CSL worth the weight?

This 812-based attention-seeker is all about getting the crowd on its feet, but climb aboard and you'll see magic behind the scenes as well
Close

The Ferrari Monza SP2 will not be built in large numbers, nor is an opportunity to ride in it likely to present itself again, so the company is keen to show it off as much as possible over the Goodwood Festival of Speed weekend.

The supercar paddock is, as usual, teeming with festival-goers, but most are huddled around the Ferrari stand. Maranello’s pulled out all the stops for this year’s event, with the Monza SP2 just one of a number of ultra-rare (and, by all accounts, priceless) creations on display. The F12tdf-based SP3JC’s one-off blue-white paint scheme provides a nice contrast from its predominantly ‘Rosso Corsa’ surroundings, and the customer-commissioned P80/C track car is on-hand to frighten the life out of all those fortunate enough to ride in it and bewilder spectators in equal measure.

The SP2, by contrast, is attractive for the exact opposite reasons. Less than 500 will be built, and the company is reticent to reveal a definitive price tag, but it doesn’t scream out for you to look at it. Yes, if you know the 812 Superfast on which it is based, it’s a remarkable design evolution, what with its redesigned front end, lack of windscreen and 1960s-style buttresses. But otherwise, it seems perfectly content to blend in. 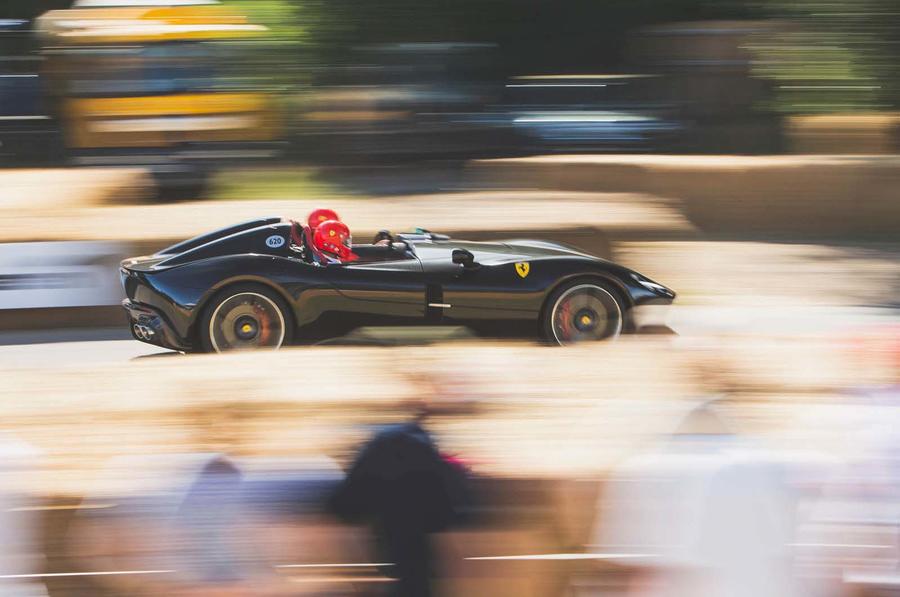 Elegant is an overused word, especially when it comes to Italian supercars, but that’s exactly what the SP2 is. It’s dark, brooding and, overall, classy. Despite the heavy style modifications, the interior is as comfortable, well-equipped and beautifully crafted as its 812 forebear (think Apple CarPlay and wonderfully welcome air-con), while new features like the clamshell bootlid and asymmetric bonnet are subtle enough that they don’t detract from the car’s purpose.

In fact, let’s move on to its purpose. Varying homologation rules mean the SP2 can’t be driven everywhere (but it stands to reason its buyers could easily pay to fly it to a destination of their choice), and it’s hardly an all-weather option. But that’s not why you’d buy an SP2, is it? It’s at the very extreme end of ‘something a bit different’, and given the way people stare past biblical machines like the Zenvo TSR-S and Koenigsegg Regera at its swooping carbonfibre structure, it’s certain to appear near the top of several Goodwood highlight reels.

The SP2’s 6.5-litre V12 is loud, sure, but it’s not obtrusive. A few playful revs are enough to get necks turning and cameras flashing, but in the deep, two-pod cabin, it almost sounds like its coming from a car 50 metres behind. We approach the start line at a pace, squealing the rear tyres well up to the top end of first gear, and sit, remarkably sedately, awaiting our green flag. 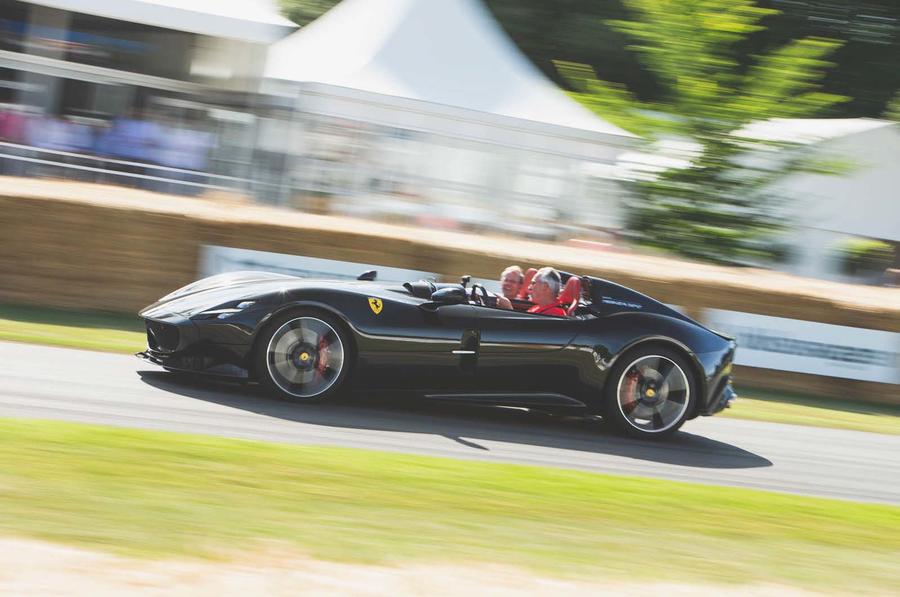 When we set off, the power delivery is so linear, so continuous, that it doesn’t even push us back into our seats. The SP2 arrives at turn 1 and corners flat enough (albeit slightly sideways) to remind me that underneath the headline-grabbing body shell lie the innards of one of the world’s most capable supercars.

But really, the SP2 is here to show off, meaning that our run up the hill is more a fantastic cacophony of tyre smoke and V12-flavoured roar than it is an exhibition of the car’s pace. The P80/C and FXX K can take care of that. Nonetheless, as we tear under the bridge and up past the final grandstands, I’m told we hit the high side of 120mph, which I’m surprised about, because at no point did the SP2 feel like it was really going for it.

Inevitably, the vast majority of SP2s will find their way into the garages of collectors and tycoons, never to turn a wheel in anger. And that’s a shame, because although it’s quite predominantly an attention-seeker, it would appear far from all mouth and no trousers.

The Festival of Speed is the perfect venue for the SP2’s dynamic debut; the crowds love it, the track’s just long enough to stretch its legs, and, best of all, we don’t need a roof in the persistent sunshine. But it’s hard to imagine it would be any more at home than on a blast up the Pacific Coast Highway, or even a sprint between the lights on Blackpool Promenade.

If anything, it’s a shame that the SP2 will be ‘mass-produced’, albeit in tiny numbers, because the rarity value is a big part of the appeal. Fortunately, at an estimated price of £2.3 million, you’re unlikely to see many pootling about, making it all the more special if you do happen to eventually hear that unmistakeably Maranello-esque snarl coming your way.

Watched then on video on a YouTube, as we all know there are plenty of videos showing not just these Ferrari, but yes, they look special,but not necessarily the best cars there, which were your favourites?