BACK TO ALL NEWS
Currently reading: How Delta Motorsport has reinvented the test mule
UP NEXT
New BMW M3 Touring due in 2022 to rival Audi RS4 Avant

How Delta Motorsport has reinvented the test mule

In the beginning – which is to say in September last year – Delta Motorsport’s highly flexible new S2 autonomous and electric car chassis, one of the star exhibits of this year’s LCV Show, was only going to appear as a notional prototype, born in a computer and destined to stay there forever.

Under the original plans, this all-aluminium, skateboard-style EV chassis design – which now sits proudly in three dimensions at the centre of a specially designed stand – wasn’t even due to show its screen-based face until this time next year. 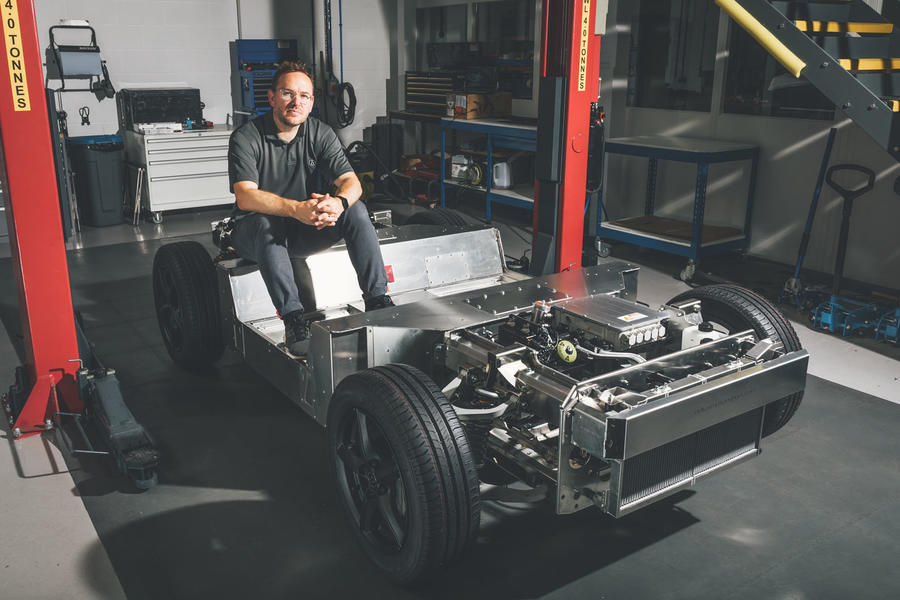 The chassis you see here was completed just days before the show opened. It was a true feat of execution, although Carpenter, Dowson and partners seem entirely unfazed by their achievement. It goes with the territory in their high-pressure world of technical creativity. “Being part of a small organisation with a limited budget is a really positive thing,” Carpenter explains. “The bigger you are, the more prone you are to paralysis by analysis. There’s huge pressure to find exact answers when there may not be any. In a small company, you just don’t have time.”

What’s the reason for the S2 project’s sudden change of pace and shape? Carpenter has a more eloquent explanation, but it boils down to the fact that there are currently platoons of promising researchers in the nooks and crannies of vehicle-focused autonomy and electrification, all with theories or processes that urgently need to take next steps. Trouble is, appropriately engineered test vehicles are expensive and in extremely short supply. S2 can do much to fill the void.

At the same time, Delta and its partners see a golden opportunity to prove, progress and then earn from their own technical expertise – and their well-proven car-building capabilities – while greatly aiding others in parallel fields of automotive technology: sensor designers, for example, or creators of vehicle infrastructure and even start-ups working on new forms of ‘mobility as a service’. 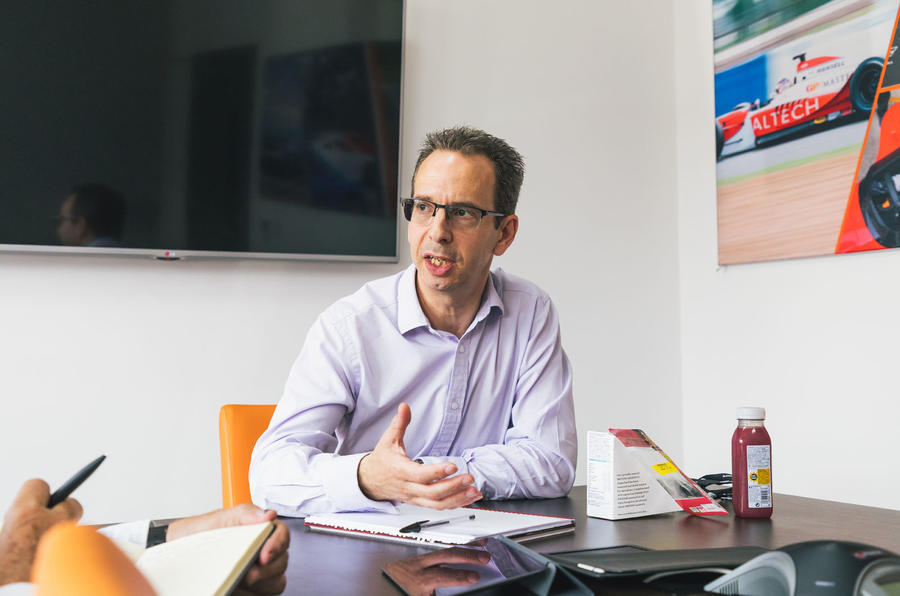 “S2 is a flexible chassis system with a much broader capability than the production-based machines our industry usually has to make do with,” explains Carpenter. “When you ask colleagues with a promising project what they’re going to do for a test vehicle, they’ll often tell you they’ve bought a Ford Mondeo or a Chrysler Pacifica and are going to automate it to make a test mule. It isn’t the car they really want. It’s just what they can get.”

By contrast, S2 can be configured comparatively quickly and easily to handle a huge variety of tests and customer activities, says Carpenter, and practically every use furthers the causes of Titan, Alcon and the other partners. “Let’s say you’ve developed a promising piece or process but it’ll cost £5 million and two years to convert a mule to take it further. You’re never going to do it. But if the cost is £200,000 and six months, you’ll probably give it a go.” 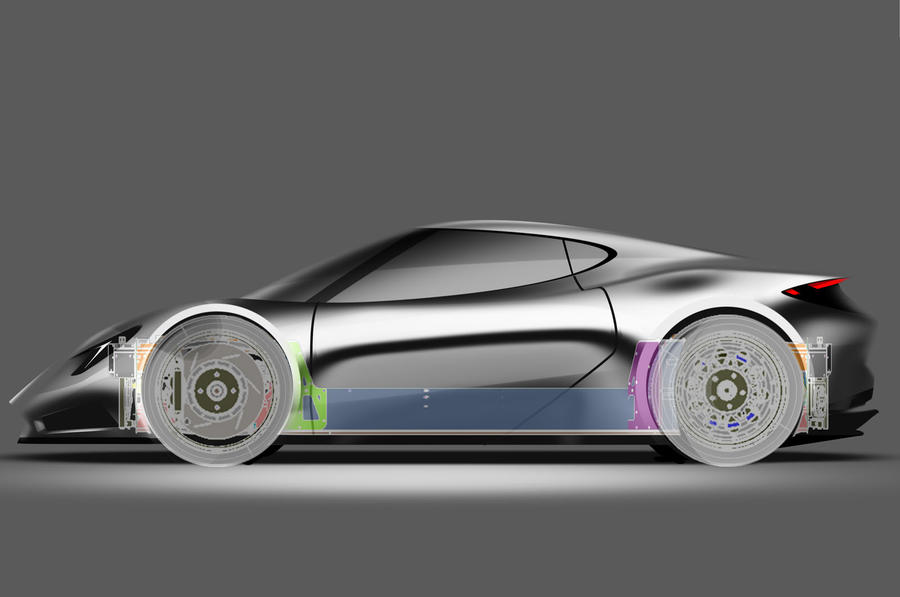 On the face of it, skateboard-style chassis aren’t particularly new. Plenty of players in the EV business have already employed the concept of locating motor, ancillaries and power electronics at the extremities of an electric car and connecting them with a low, rigid platform chassis that carries the traction battery-set below the cabin floor. It’s the logical way to do things.

What makes the skateboard revolutionary are the far greater levels of designed-in flexibility than those of previous offerings, to the extent that Delta is describing it to clients as ‘skateboard 2.0’, justifying the S2 name and deliberately built to take account of lessons thrown up by predecessors. It uses a self-supporting structure of fabricated aluminium, designed by GCE and Tecosim, and depends on compact box sections for its rigidity, with the double-wishbone independent suspension systems carried on the chassis longitudinals at both ends.

As well as being almost infinitely flexible in wheelbase, track, overall length, overall width, bulkhead dimensions, crossmember positioning, seating positions and ride height, it can accept a huge variety of powertrains, both hybrid and pure EV. In theory, it could also handle hydrogen fuel cell applications, and even a petrol-only version should anyone ever ask. In fact, it’s so flexible that Carpenter is reluctant to say it has a back or a front, because components can be located in such a wide variety of locations. In Delta’s promo video (catch it on its website), there’s even a factory-based loader version with a single-seat operator’s cabin located outside the wheelbase. 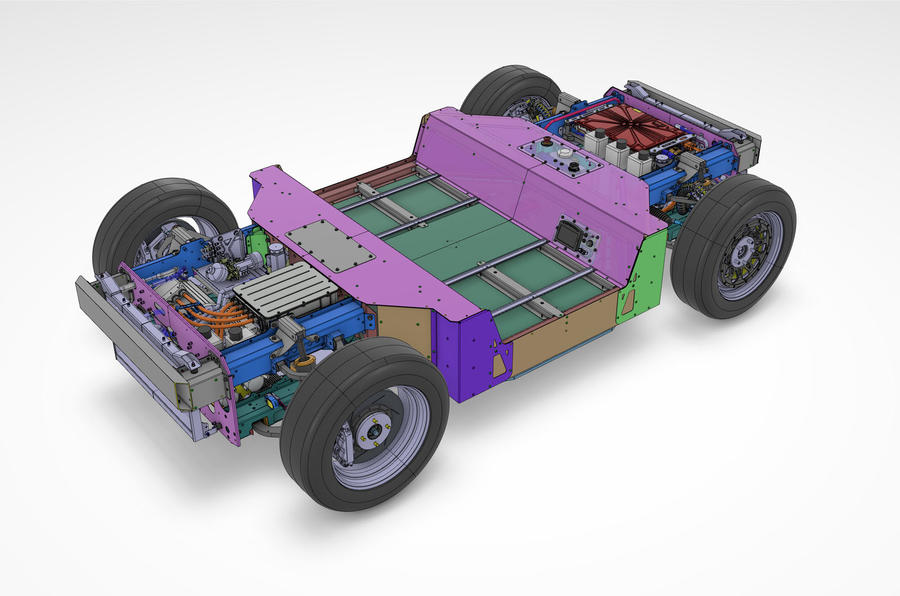 In LCV Show form S2 is a pure EV, without a body and using the ultra-short wheelbase suitable for city-based pod use, the kind of thing you’d earmark for a car-sharing business. The Delta partners deliberately chose a short, high version to test their design in the worst case: high centre of gravity, least battery and ancillary space, poorest stability, requirement for a big passenger space. Larger versions can be lower and more spacious.

The show S2 is also configured for fore and aft seating for four, has no steering wheel and is powered by a single 80kW motor, driving the front wheels through a single-speed reduction gearbox, plus a pair of hub-mounted motors to power the rear wheels. The set-up shows how easily torque can be deployed to the wheels in varying amounts to aid traction and stability. It could just as easily have its motor locations reversed, to suit a client’s requirements, or be equipped with a steering wheel, or have a range-extender powertrain. (Among other accomplishments, Delta has already won awards for a unique turbine-based power generator design, ideal for a range-extender application.) “In simple terms,” Carpenter explains, “the vehicle has three main parts: an end, a middle and another end. We’ve designed it with load paths running through the chassis sills to front and rear crash structures.” 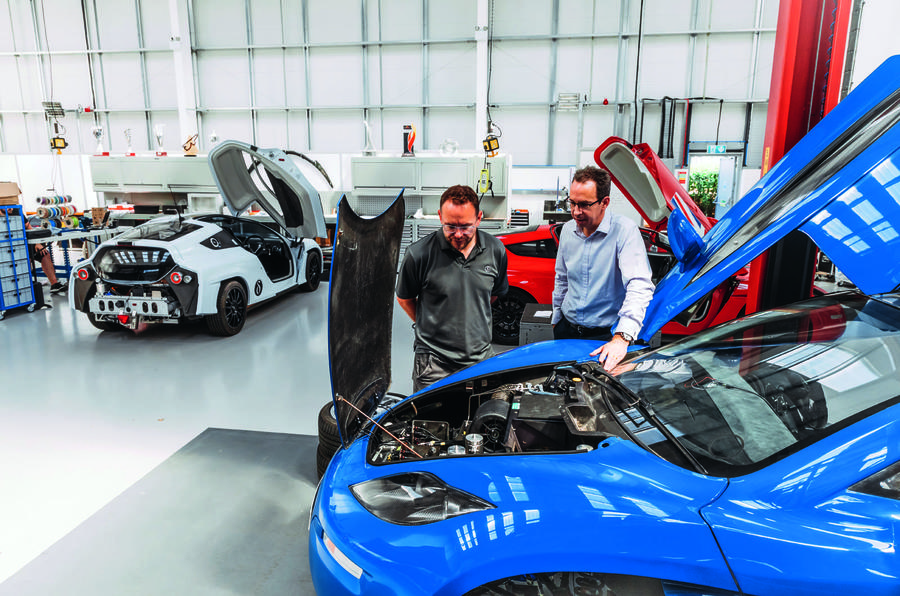 Despite the rush, Delta and its partners have especially enjoyed bringing the S2 concept towards reality in just a few months. “It feels right,” says Carpenter. “We’ve done a wide variety of work since we started the company in 2005, but we’ve moved more and more towards electrification and hybridisation. Last year we started thinking more directly about how to commercialise our knowledge, about generating revenue and, essentially, earning money when the lights are off, which is what Innovate UK is supporting us to do. That employs people, helps other inventors and brings wide benefits to UK plc, which we’re passionate about.”

“Without the right vehicle as a basis, many people involved in electrification and autonomy research can’t ever be sure how their theories will pan out,” Carpenter explains. “In the end, we decided it was best to just get on and make something, essentially to see what happened. There isn’t a vast bank of know-how out there; you can’t draw parallels with OEMs that have spent the past century building next iterations of existing models. We decided we were as well placed as anyone to choose a destination for the project and a path to get there. We’ve already found it has taken us a long way, fast.”

After S2’s introduction at the LCV Show, Delta and its partners will get serious about development. Full-on dynamic tests will be under way before the end of this year. Potential clients are already showing interest in vehicles in “ones, twos, fives and 10s”. Delta has also had a couple of approaches from organisations wanting to scale up to much bigger volumes. “We’ll have to think carefully about that,” says Carpenter, “because at those volumes flexibility is just about the last thing you need.” 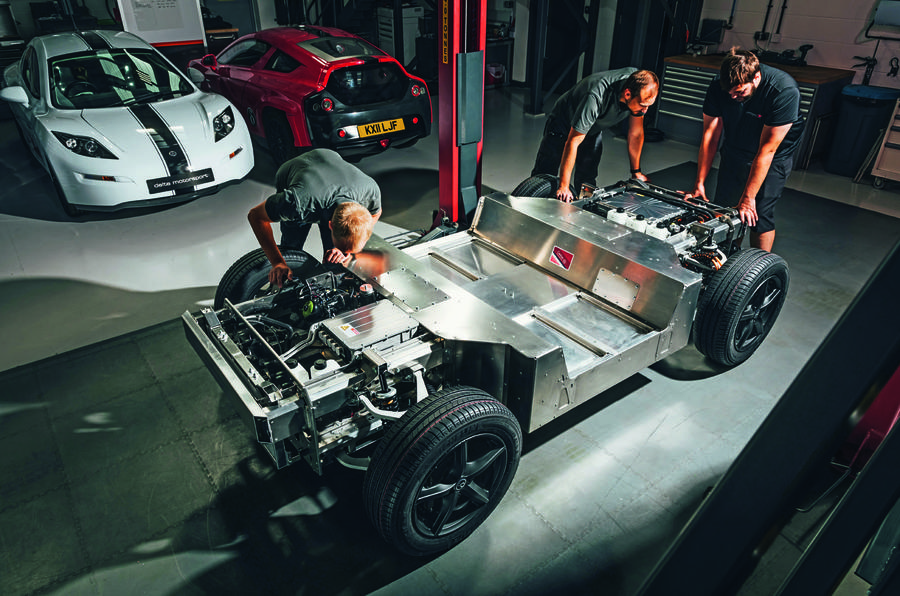 To the outside observer, the whole S2 project smacks of a pioneering spirit, of important work being done here and now whose significance will grow with the years. So I put a sentimental hack’s question: do Dowson, Carpenter and Co feel a sense of destiny in what they’re doing? Their surprise at the suggestion does them credit. “Well, not really,” says Carpenter, after pausing to think. “You just see a series of problems that need to be solved. You know there has to be a way.”

Simon Dowson and Nick Carpenter, the principals of Delta Motorsport, met as young engineers at Reynard, the race car manufacturer, in the mid1990s and have been mostly working together ever since. They set up Delta in 2005 in a family-owned barn with Carpenter as technical director and Dowson as delivery specialist and supply chain manager, moving to Silverstone soon after. 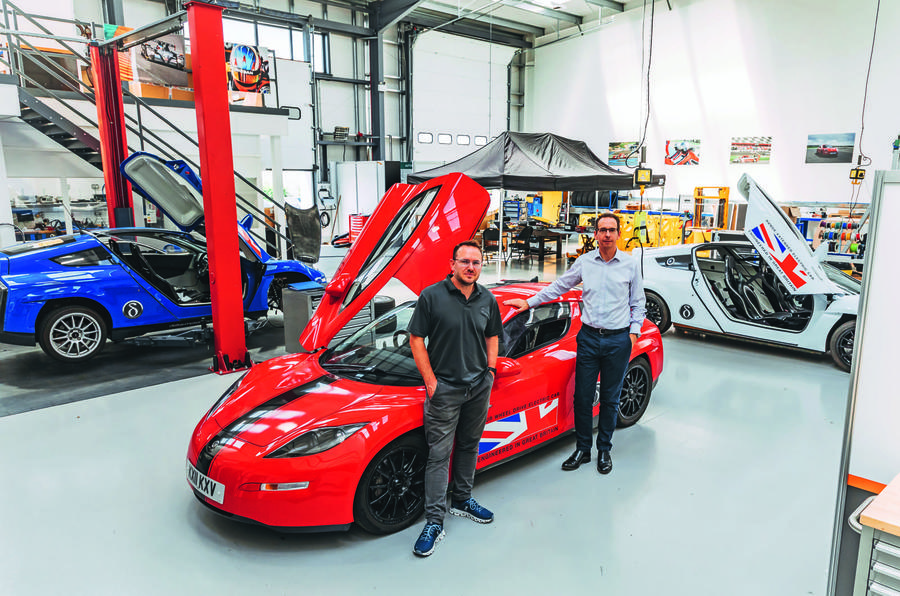 They rapidly won a high reputation from working on a wide variety of motorsport-related projects (designing, testing, building and shipping 15 single-seater race cars in five months for GP Masters was an early one). They later played a big part in the planning and design of Jaguar’s stillborn but highly praised C-X75 hybrid supercar. More recently, Delta has gravitated towards electrification and range-extender projects, seeing these as the future. Their five-vehicle E4 experimental car fleet won high praise, and they have since produced an amazingly compact micro-turbine range extender.

Carpenter is a huge enthusiast of range-extender theory as the most practical, logical step we can currently make to shift decisively towards a lowCO2 future. “Look at the money we currently spend on light-weighting,” he argues vehemently. “The easiest way of lowering the weight of an EV is to use a smaller battery. That’s what a range extender does and – as my own experience with a range extended BMW i3 shows – you still do over 95% of your driving on electric power.

“If our objective is to increase the total number of electric miles driven in Britain – a goal that’s too little recognised – the priority isn’t to have a few more Jaguar I-Paces and Tesla Model Ss on our roads. What we need are many more cars driven by small batteries.”

Whatever next? The future of motoring​

Here comes outrage from the below the fold reactionaries...

It’s alright boys, you’ll still be able to play with your toys.