Chris Goodwin used to joke that his office was the cabin of whichever prototype supercar he was developing at the time. But since moving from McLaren to become Aston Martin’s high-performance test driver, and head dynamic development on the brand’s three mid-engined cars, his workspace has become much more mundane: an industrial unit in Milton Keynes.

Okay, so this unit is also the HQ of Red Bull Racing (RBR) – we’re not talking Wernham Hogg here – but it’s still far less exotic than Goodwin’s former haunts. His tally of air miles has stalled, too.

“This is the first winter for years I’ve spent in England,” he says. “Gianfranco in the Riva del Sole hotel in Nardò hasn’t seen me for months. He probably thinks I’m dead.” 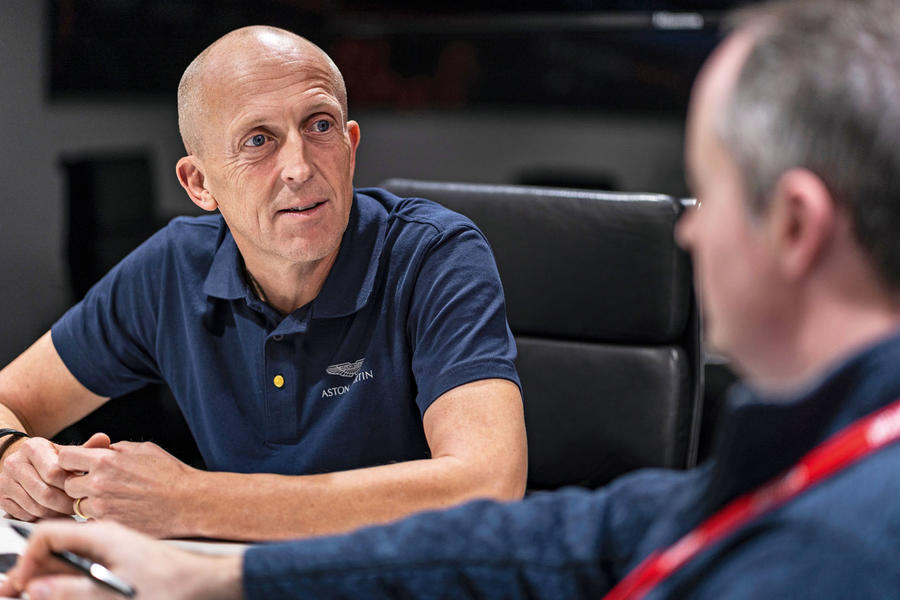 Yet Goodwin is working at the cutting edge, developing the forthcoming Valkyrie in a virtual environment good enough to blur the lines with reality, one that allows Aston and Red Bull to work on Adrian Newey’s fever-dream megacar well before the first prototype is running. Autocar has been allowed to see the development simulator, and to have a first go in the digital Valkyrie.

Goodwin has already driven 5200 miles in the simulator over 31 sessions, working through a list of test scenarios. The computer model of the Valkyrie is detailed enough – and the simulator platform powerful enough – to allow meaningful data to be extracted from it. Some 750GB has been harvested already and shared with key suppliers.

So Goodwin’s virtual laps at Silverstone are the basis for Cosworth’s dyno testing of the prototype V12. According to James Knapton, RBR’s head of vehicle science, the Valkyrie’s Bosch stability control system will soon be running in real time, receiving the sensor inputs it would get from a physical car and outputting its decisions straight into the program. 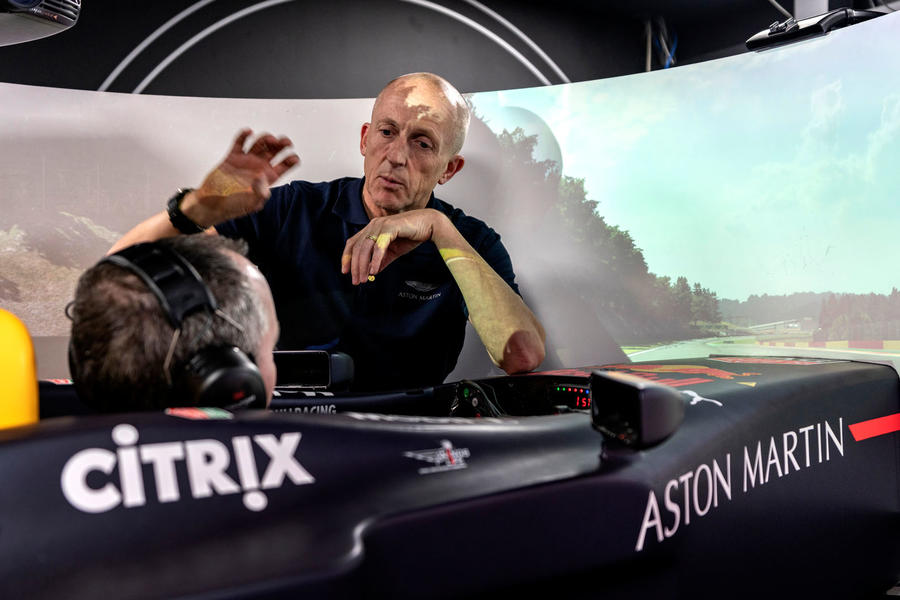 So what stability control is running at the moment, I ask. “None,” says Goodwin, grinning, “and there’s no ABS either.”

Simulators are expensive to run and my time is limited. I will get to drive around Spa with one stint in what’s meant to be a generic supercar (“a bit McLaren, a bit Ferrari”, according to Goodwin) and then one in a fully simulated Valkyrie.

The simulator shows off its racing origins: I have to clamber into a cutout Formula 1 tub – necessitating left-foot braking – and the view on the wraparound screen is from the perspective of a single-seater, with rendered Michelin tyres on each side. There’s also a full F1-grade steering wheel, although Goodwin says I can ignore all controls except the gearchange paddles and push-to-talk button to speak to the control room. The simulator’s range of motion is limited – big systems require warehouse space – but it still moves violently enough to replicate true cockpit sensations. 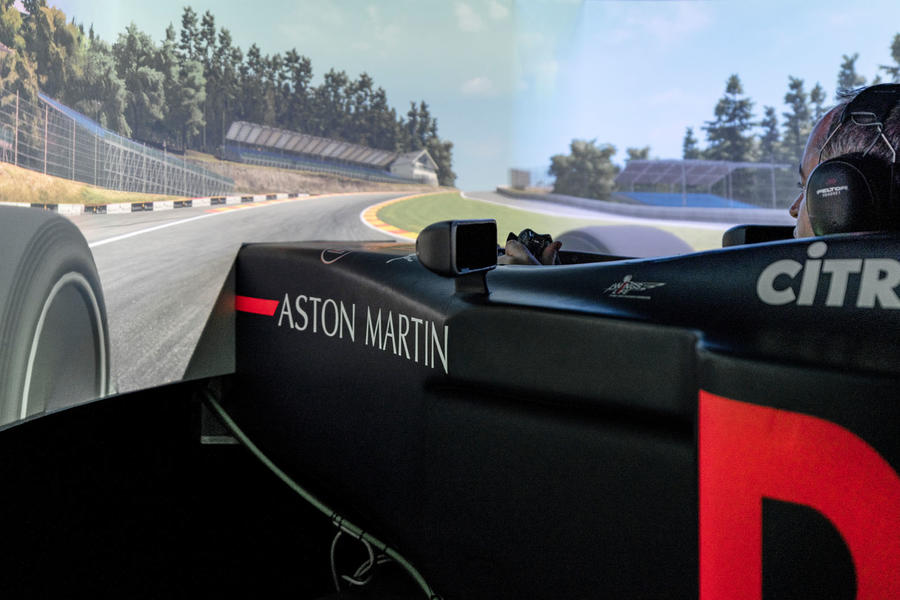 First impressions are strange, the big-boy simulator feeling somehow less convincing than the video game versions of Spa I’ve experienced. The motion actuators create a sense of cornering and longitudinal forces, but these are short and sharp rather than sustained. The steering feels real, much more so than the usual force-feedback games controller, but the brake pedal lacks resistance and anything more than gentle pressure has me locking the front wheels. The graphics are also some way short of the beautifully rendered crispness of something like Forza 7. The wraparound screen gives an impression of three dimensions, but doesn’t give a sense of depth or distance, and I find I’m either braking much too early or clattering over kerbs with excessive speeds. On my second lap, I attempt Eau Rouge at such a ludicrous pace I crash the whole simulation, ending up floating in a dark void under Raidillon.

Eventually I string together a lap without any massive errors, but when Goodwin crouches down for a debrief, I admit the sim doesn’t feel real. It turns out it’s not meant to.

“That’s because it’s a tool, not a game,” he says. “It’s a motion platform, but the movement is only enough to inform an experienced simulator driver. It feels completely different to the way a finished car will – all simulators do, to be honest – but there’s a parallel universe of simulator behaviour and real car behaviour. Recognising the translation between them is what comes from experience.” 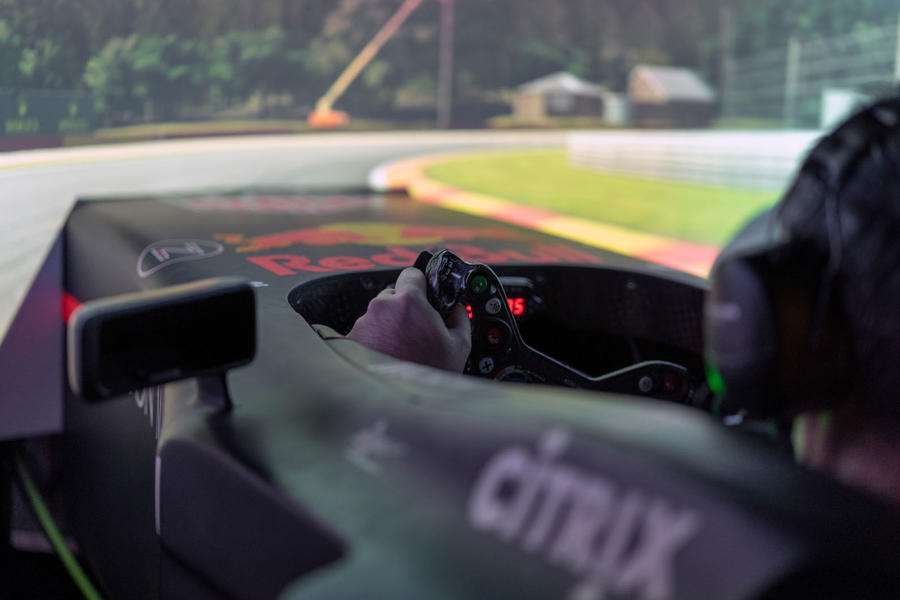 On board the Valkyrie

There is no visual change switching to the Valkyrie model, although there’s now a V12 engine note in place of a generic V8 tone. But as soon as I start moving, everything feels easier. No surprise that the Valkyrie is massively quicker – the finished version will have 1160bhp and weigh under 1100kg – with even Spa’s longest straights feeling pretty short. But it is also more forgiving of mistakes with huge mechanical grip and, as speed rises, the addition of what must be huge amounts of aerodynamic downforce. It is still possible to crash, of course – I add another couple of highlights to the sim team’s blooper reel. But at higher speeds, the virtual Valkyrie feels practically painted to the road – taking the ultra-fast left-hander at Blanchimont without lifting (something I’m certain I’d never be brave enough to do in real life). 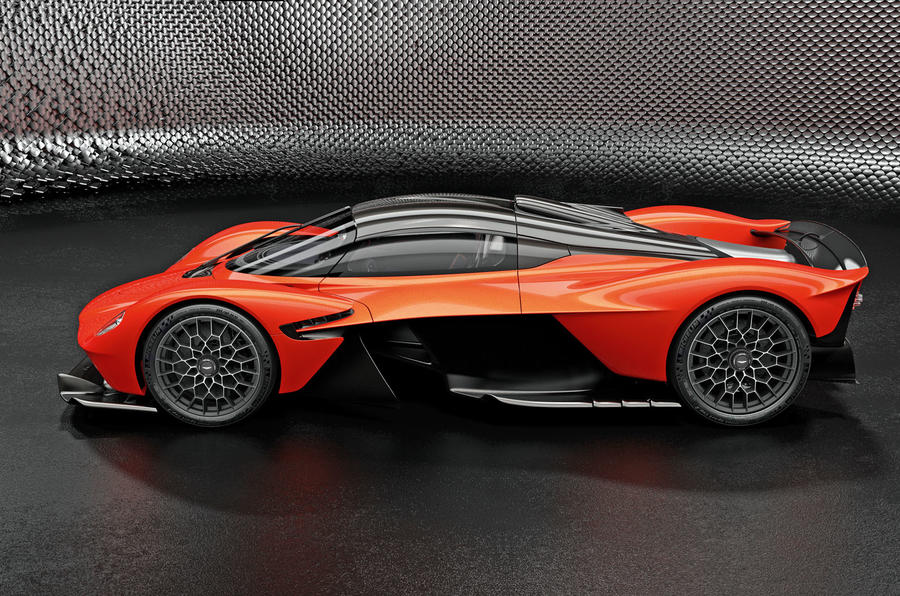 After less than half an hour in the sim, I’m feeling sweaty and wrung-out; Goodwin often goes for five hours without a break. I’m not given any lap times – Aston doesn’t want anyone to try to extrapolate the car’s performance until it is ready to communicate just how special it is. But Goodwin does share one number, saying my best Valkyrie lap was 25 seconds quicker than my fastest time in the generic model. The difference seems ludicrous, but Goodwin insists the Valkyrie really will be that much faster.

“I talk to customers who have paid good money for this car, and they don’t know what they’ve got,” he says.

They are going to have fun finding out.

Creating your own marketplace with WordPress

All gratitude to StoreMate Dokan Theme, making a WordPress marketplace website with expert structure and highlights. Create your very own multi-vendor online store in a substantially more clear manner with StoreMate Dokan https://wbcomdesigns.in

will Cars like these just be Trackday cars, I can’t see them used as a trip to your local food store.

will Cars like these just be Trackday cars, I can’t see them used as a trip to your local food store.

They might be track day cars, if any buyers actually drive them...

Aston is training the buyers of the cars to drive them properly. They start with a Vantage, then a Vantage GT4, and on to a Vulcan, and finally step up to the Valkyrie.
Peter Cavellini 20 April 2019