BACK TO ALL NEWS
Currently reading: 2019 Shelby GT500 revealed as fastest road-going Ford Mustang ever
UP NEXT
Toyota bZ4X deliveries still on hold after wheel detachment concerns

Ford has officially announced the Shelby GT500 at the Detroit motor show, reviving a model the company stopped selling in 2015 as the fastest road-legal Ford Mustang it has ever built.

The super-performance muscle car, which features the iconic tuning firm’s famous Cobra logo, uses a further developed and supercharged version of the Mustang GT350’s 5.2-litre V8 engine. It will produce in excess of 700bhp, which is more than twice the horsepower of the first ever V8 Mustang of 1967. 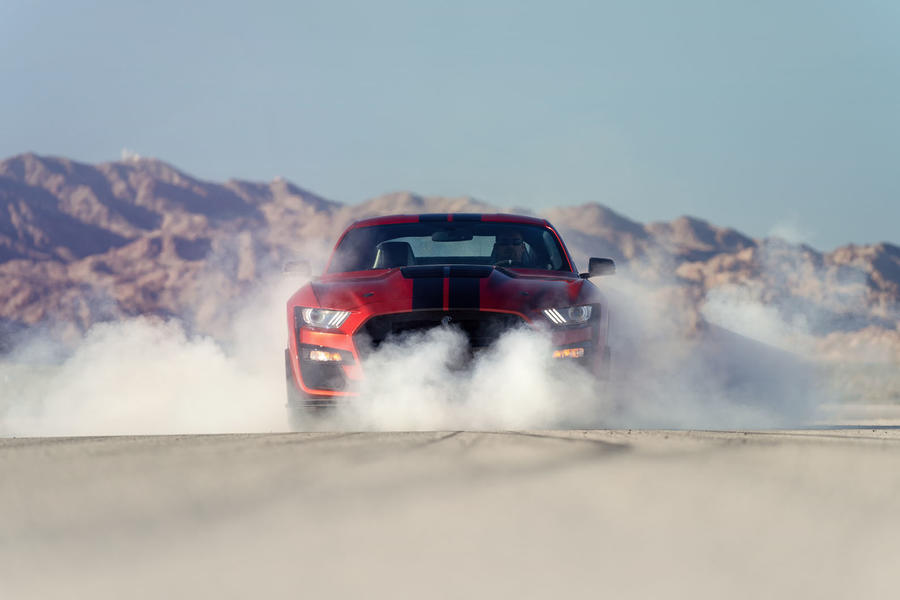 Power is delivered to the rear wheels through a carbonfibre driveshaft and a 7-speed dual-clutch automatic transmission, which was developed with insight from the team that worked on the Ford GT supercar. Ford suggests the combination should deliver sub-100 millisecond shift times. Acceleration from 0-60mph is promised to be in the ‘mid-three seconds’ and the car should run the quarter-mile in sub-11 seconds.

Ford is promising the GT500 will be a capable car on the track as well as the drag strip, thanks to revised suspension geometry, lighter front and rear springs, and a new electronic power steering unit. It also uses 420mm two-piece brake rotors, the largest of any American sports coupé, along with larger Brembo six-piston callipers for superior braking over the GT350. 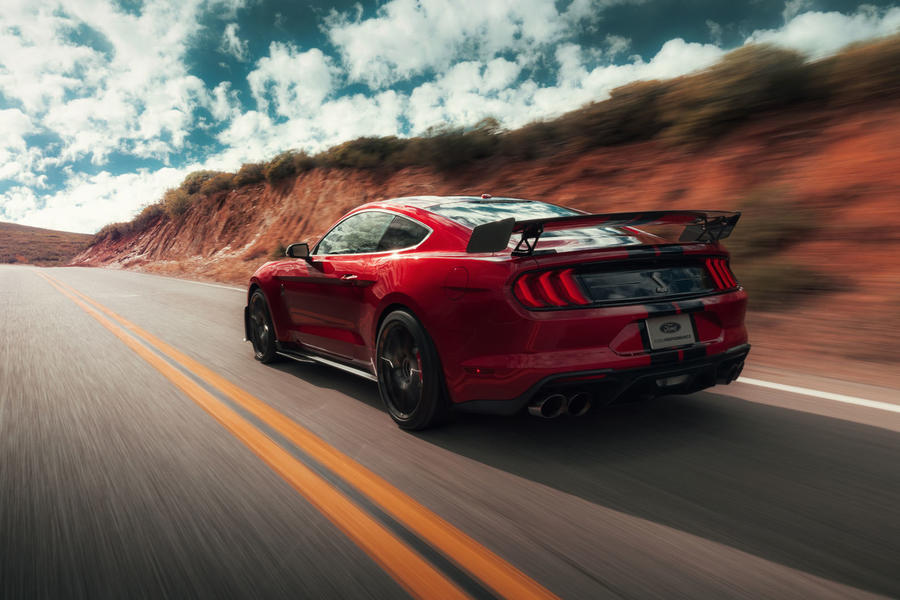 The GT500’s greatly enlarged front grille and louvered bonnet vent create 50% more airflow than the GT350, and help generate more downforce than any other factory Mustang. 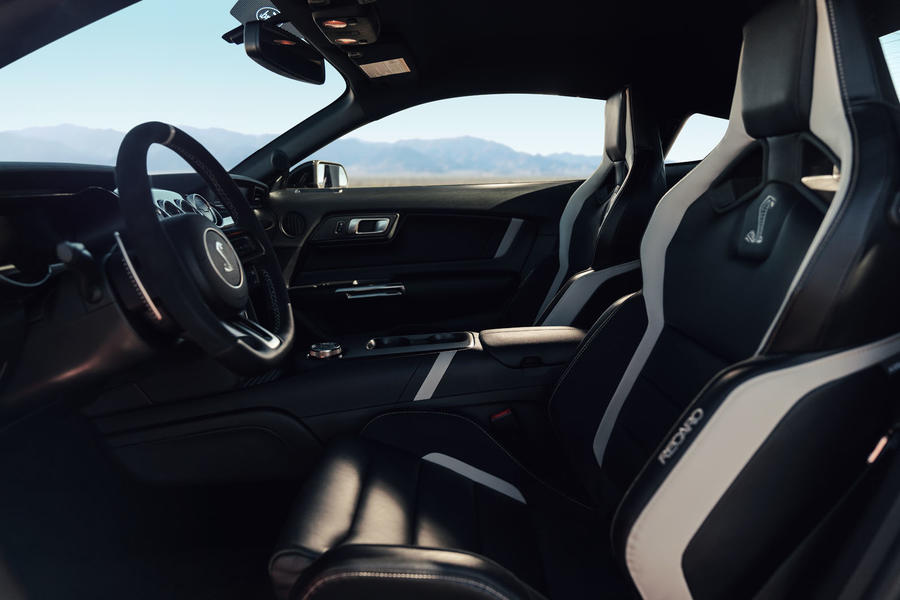 The interior is only slightly changed from the GT350, with new carbonfibre dashboard trim and optional Recaro bucket seats with pass-throughs for safety harnesses. It retains the 12in digital instrument cluster and 8in Sync 3 infotainment, along with a 12-speaker B&O Play audio system.

The GT500 has been in development for more than a year, with Ford having previously confirmed the car’s wide longitudinal body stripes in a teaser video released before the Detroit show last year.

The car will go on sale in the US later this year, replacing the GT350 as the flagship of the Mustang line-up. Like the GT350, the GT500 is unlikely to be sold officially in the UK.

Ford had previously announced the Shelby GT500 would be one of a number of new versions of the Mustang – which will include a hybrid version, part of a major electrification strategy of the firm's North American line-up. Ford says the hybrid system in the Mustang Hybrid will be tuned to "deliver V8-like performance with more low-end torque".

All the news from the Detroit Moto Show

While they’re emulating Audi they could put the timing chain at the back of the engine so you have to pay £6000 every three years to get it changed. And put in an automatic gearbox that needs a new valve block after 12,000 miles at a cost of £3000. Oh yeah and make sure the abs pump wiring has water ingress £1200 to correct. But al least on a German car you have a fine stereo to listen to while you wait for the breakdown truck

No manual box? I doubt that

Tragically it really is auto

Tragically it really is auto only, therefore I hate it.
eseaton 16 January 2019

I positively love that it

I positively love that it does not have an Audi interior.
View all comments (10)