BACK TO ALL NEWS
Currently reading: The secret world of Aston Martin's camouflage wrapping
UP NEXT
Exclusive: Morgan bosses detail ambitious growth plans

A lot more goes into disguising a plush new car than you might think. We talk to Aston Martin's camo-designing brains
Open gallery
Close

If you have a Christmas tree, take a glimpse under it. There are presents there, right? They’re difficult to miss, since they’re probably wrapped in bright, shiny paper. Despite that, you probably think you know what some of them are – but you won’t know for sure until you pull the wrapping paper off on 25 December.

There probably isn’t an Aston Martin DBX under your tree (unless you have a very big tree), but you may well have spent time admiring a wrapped-up version of the car, trying to work out what it looked like underneath its mildly confusing covering. But if Sam Holgate did his job, you didn’t actually know until the SUV was launched last month. 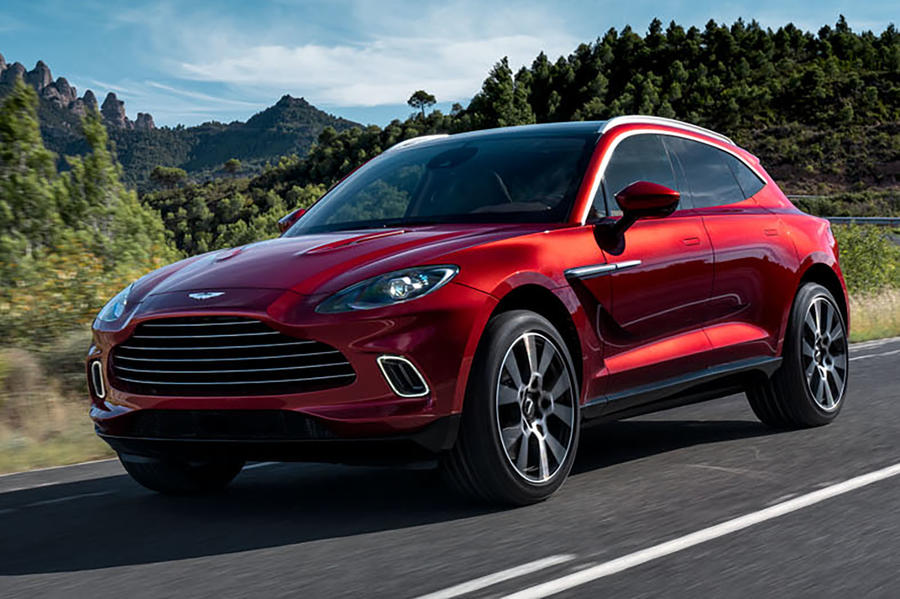 When not designing machines such as the latest Aston Martin Vantage, Holgate is in charge of Aston’s camouflage wraps. Like most aspects of the car industry, what started as a simple goal – to disguise a new model’s looks – has morphed into a publicity-hunting arms race.

Camouflage livery isn’t about hiding the existence of a new car. Wrapping a machine in black and white swirls – or other increasingly bright patterns – self-evidently isn’t going to make it hard to spot, because it will clearly draw attention to a car. So why do it? 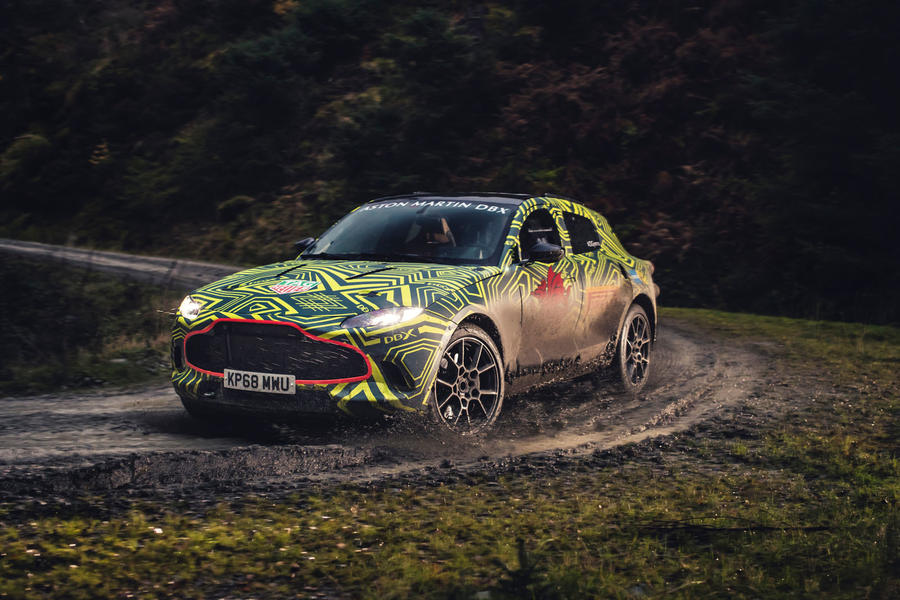 Blame the zebra. Possibly. There’s a theory their black and white stripes evolved to confuse predators, who’d be dazzled by the jarring lines and left unable to work out which way said zebra was heading. The idea is disputed by some, but that hasn’t stopped ‘dazzle camouflage’ being applied elsewhere: in the First World War, allied forces painted battleships with bright, bold stripes to bewilder German U-boat commanders.

When a car starts testing in public, designers have to accept it’s going to be spotted; the camouflage wrap is about hiding the details. “It gives us breathing space,” says Holgate. It’s not just about ensuring the reveal remains a surprise: intellectual property of key design features of cars will be patented, so firms need to keep those designs under wraps until that process is completed.

With a car such as the DBX, when the first prototypes left the factory Holgate admits “it was obvious it was our first SUV on the road”. Which leads us to how camouflage wrap has developed: firms know the machines will be photographed, appearing online and in the likes of Autocar. So the wrap has become “a great moving billboard to showcase us, our logo and even our partners,” says Holgate. “It’s all part of building anticipation.”

Aston first used bespoke camouflage on the latest Vantage, with Holgate developing “crazy criss-cross stripes” that were inspired by both the firm’s old logo and dazzle-patterened battleships. They also switched from black and white to the distinctive green that featured on the Vantage GTE racing car. “It was a chance to really like the road and track versions,” adds Holgate. 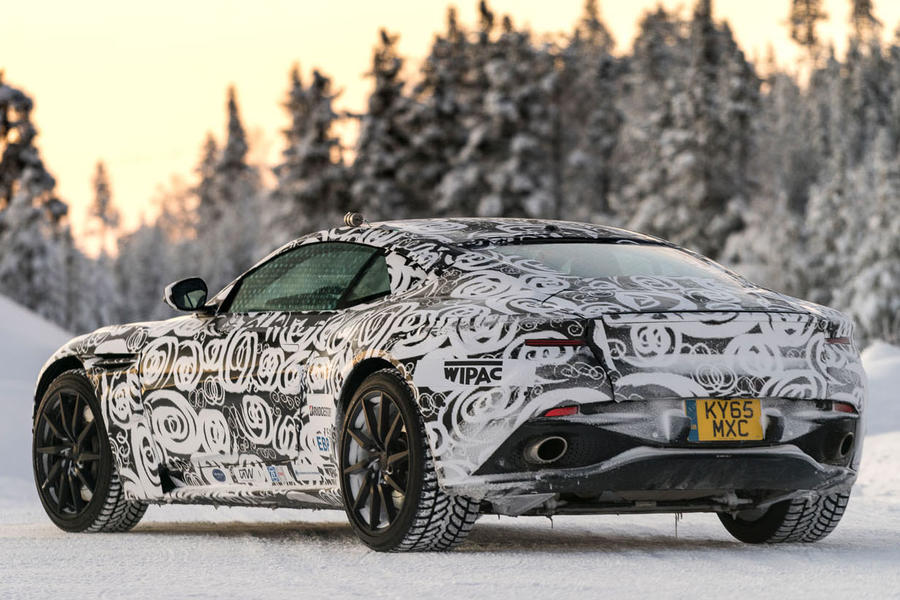 The Vantage wrap was used for the first DBX test hack, but when the first ‘proper’ prototype began testing “it felt a nice point to make a step-change in terms of the camouflage to show the development of the car”.

This time Holgate took the DBX name and re-imagined it in the style of an off-road tyre tread. Holgate admits there’s no exact science to the design, beyond creating something with sharp edges and patterns that will distort the true shape of the car.

“The goal is to trick the eyes,” says Holgate. “We create a tile pattern than we print it out on A0 vinyl sheets. When wrapped on the car the scale and different angles cut across the feature lines, making it really hard to read the actual shape.”

Holgate designs wraps using 2D images, sometimes completing a single 3D render as a proof of concept. Once the vinyl sheets are stuck on the car, partner logos and other design elements are added. 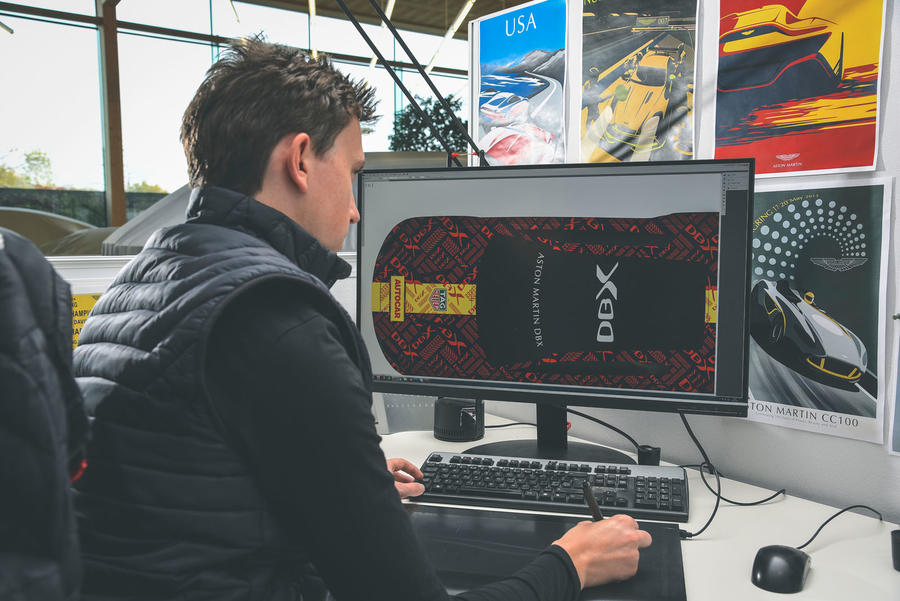 “We want to make the pattern quite complex, but it has to be easy to apply,” adds Holgate. “When a car returns to the workshop we’ll often swap parts, which means applying new camo each time. We don’t want to make it too obvious we’ve changed a part.”

Speed is also crucial: with test and development time limited, Aston’s test team don’t want to sit around waiting for complex wraps to be applied.

The volume of sculpture on an Aston Martin design makes disguising the lines particularly hard, so the firm also uses “more subtle” physical disguise elements in the form of foam blocks stuck to the car. The wrap helps to hide the placement of these elements. Lights, meanwhile, will also be covered, leaving just the minimum legal standard visible.

But there are some features that just can’t be hidden, so Holgate doesn’t try. “We’ve started highlighting the grille,” he says. “It’s very difficult to hide, so you just have to embrace some areas, while trying to hide other parts.”

Another example is the DBX’s rear wing, which deflects air down the back window, removing the need for a windscreen wiper. “We’d love to have kept that secret for the reveal, but the testers needed it working to ensure the results were right, so we couldn’t disguise it,” says Holgate. “When elements offer form and function you just have to accept they’re going to be seen.” 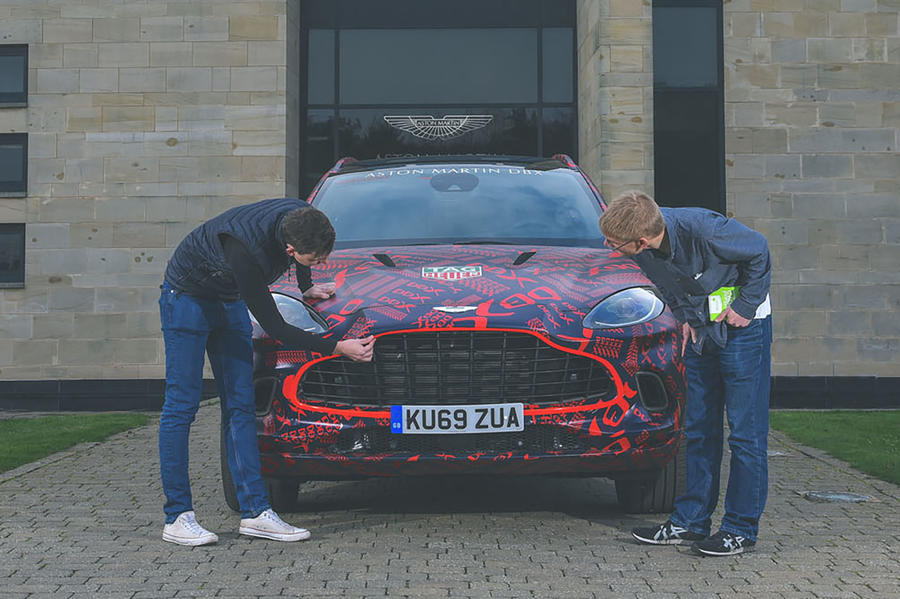 Aston has updated the DBX wrap’s design several times, at one stage switching it to red and adding a Welsh dragon to recognise the new St Athan plant where the model will be built. Holgate adds that since attention tends to lessen when the same livery is seen multiple times, it’s seen an opportunity: “People get used to seeing the same camo, so you might be able to sneak a new bumper or something in under the radar.”

The aim is that when the wrapping paper finally comes off a new car such as the DBX, the styling is still a surprise. And if Holgate has really done his job well, it won’t be what you’re expecting, either.

Speaking of which, that box under the tree that you think contains the keys to a new DBX? Sorry, but it’s socks. 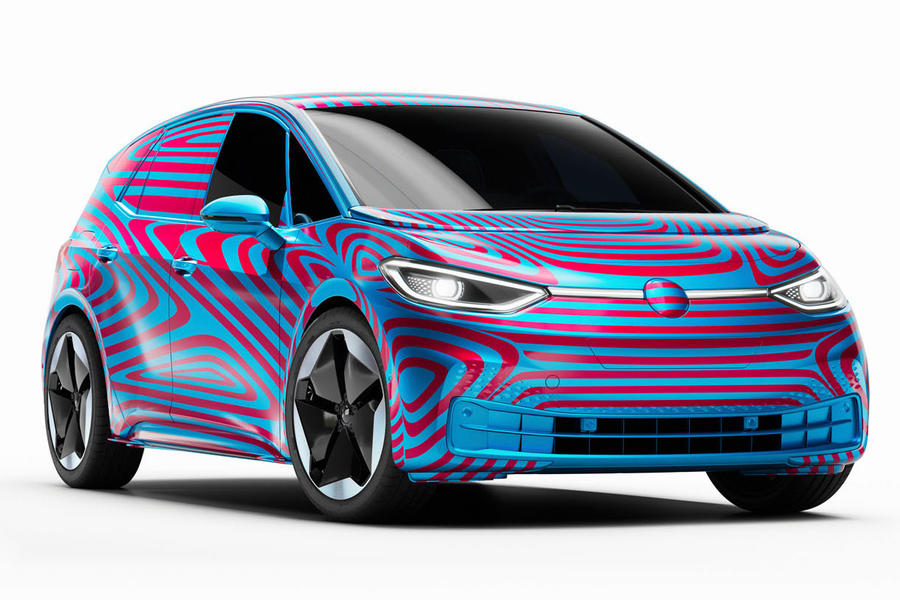 Volkswagen ID 3: Late test versions of VW’s crucial electric hatch used a bold red and blue wrap – which was first shown with the car hidden inside a camouflaged glass box. 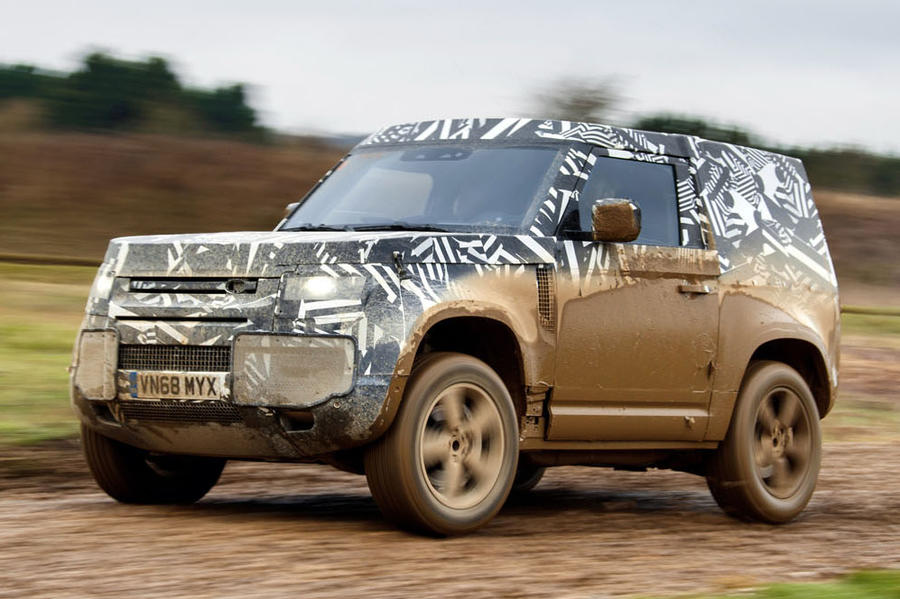 Land Rover Defender: The new Defender wore traditional ‘zebra’ wrap, but it wasn’t hard to work out what it was, not least due to the massive ‘best 4x4 by far’ hashtag down the side. 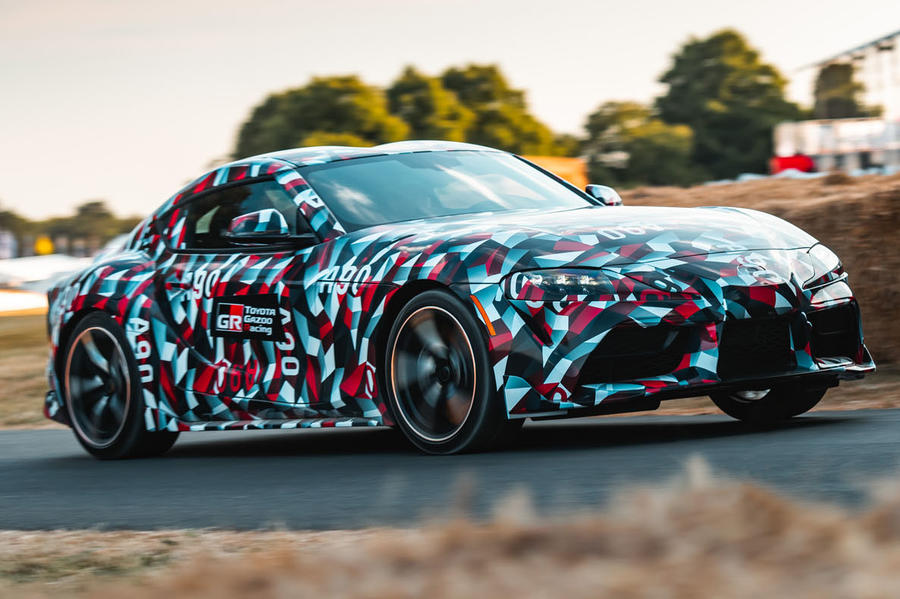 Toyota Supra: The Supra tested in a red, black and white camo that reflected Toyota’s motorsport colours. It was also used by the company to create a wrapping paper last year.

Honestly, they'd have been better spending more time designing the actual cars than wrapping them.   Aston has suffered from the hands of Marek Reichman.   His designs are failing Aston.

DB11 & DBS have a mess of an interior, and the nose of the DBS isn't good.   Vantage a mess front to back.   And those steering wheels...

The DBX isn't terrible, but not perfect either.   Thankfully!   Aston might just have a chance to survive.

But with a better designer Aston would be thriving.