BACK TO ALL NEWS
Currently reading: First ride: 2020 Aston Martin DBX prototype
UP NEXT
Jaguar Land Rover Reimagined: All the big questions answered

Autocar has been given early access to the Aston Martin DBX ahead of the car’s unveiling on 20 November, including a passenger ride alongside Aston’s chief engineer, Matt Becker.

The new SUV will be the most complex car in the company’s history when it arrives next year and Aston Martin has confirmed a starting price of £158,000.

The five-door 4x4 rides on a new aluminium platform and will be powered initially by a 542bhp 4.0-litre Mercedes-AMG V8. The twin turbocharged has been given an Aston tune, particularly aurally, with less bass than in its AMG applications. It drives through a nine speed torque-converter automatic gearbox, the first time Aston has used the Mercedes ‘9G’ transmission. Other powertrains will follow and the platform will be used for other Aston models.

The new platform allows the engine to be placed well back in the engine bay and none of the block overhangs the 22in front wheels. Extruded chassis sections along its length meet vast castings at each corner, providing great body strength. Aston says torsional rigidity, at 27,000Nm/deg, is high, but that just as important is great hard-point stiffness to reduce road noise. 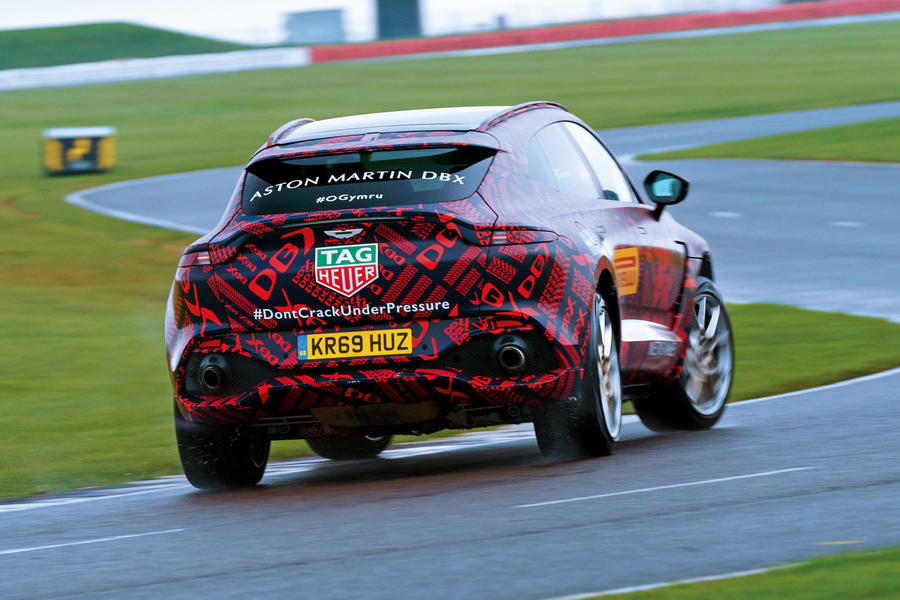 There’s a slight, 54:46 front biased weight distribution to the 2245kg off-roader. Aston values vehicle handling highly and, as a result, the DBX has a raft of dynamics systems “without which you couldn’t do it”, according to Becker.

There is double-wishbone front and multi-link rear suspension, triple-chamber air springs at each corner, adaptive Bilstein dampers and 48V active anti-roll bars, which, Aston says, are specced to provide 1033lb ft of roll resistance, more torque than in any rival. Overall, the DBX has less body roll than a Vantage. Aston could have made it roll not at all, but apparently that “feels weird”, said Becker.

Aston has benchmarked heavily ahead of launching a car in a new segment. It says it has tried nearly all of its rivals but has particularly targeted the BMW X6 M, Range Rover Sport SVR and Porsche Cayenne Turbo. This car is as large a leap for Aston as the Cayenne was for Porsche. “You have to change your test procedures because sports car procedures don’t work,” said Becker.

The targets are challenging because the remit of an SUV is so broad. “Working on this makes you a fan of SUVs,” admitted Becker.

The DBX has a centre differential that can place up to 47% of power to the front wheels or leave 100% going to the rear, where there’s an electronically controlled limited-slip differential. On a damp Stowe circuit at Silverstone, which Aston recently adopted as its test track, it was possible to slide the car around – not something customers will ever do, but evidence that Aston takes handling seriously, even in this market sector. 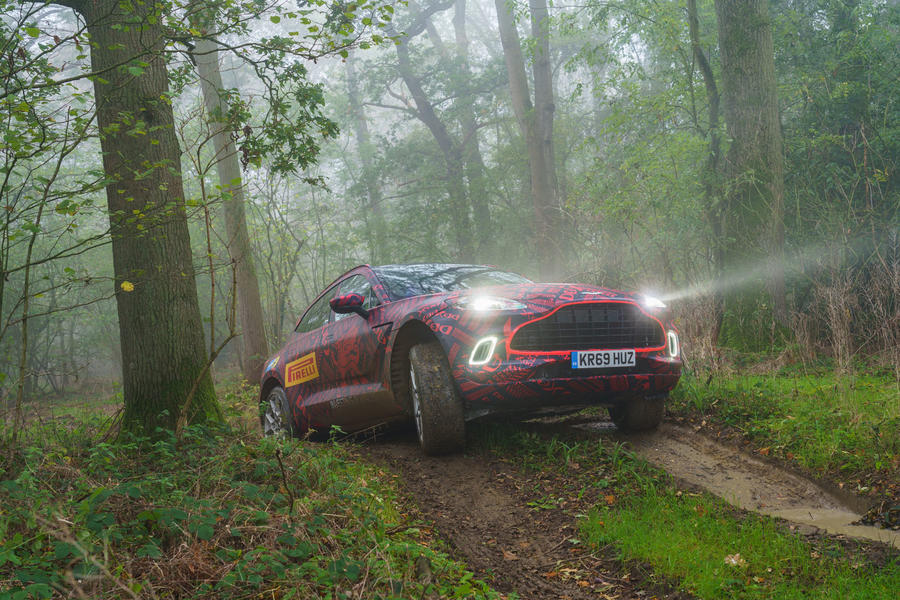 Different drive modes can drop the ride height by up to 30mm for on-road dynamism or raise it by 45mm off road, where, with a 500mm wade depth and anti-roll bars that are effectively disengaged. The DBX can pull 2.7 tonnes and have 100kg mounted on its roof. It is available with regular, all-season or winter tyres, all bespoke Pirellis.

The DBX seemed extremely capable off road, although pulling a horse box across wet grass is “the metric” customer demand, said Becker.

On the Aston’s roll bars, the motors can’t be disconnected and will drag, so sometimes, rather than putting torque in to reduce roll, power is applied to them to increase articulation and make the car ride with more flow.

This, you suspect, is the hardest part of getting a car to feel right: the endless hours, days, weeks of tuning everything in the hope that when you eventually try it, it feels natural to you, the customer. There’s no active rear-steer for that reason.

The car we saw was covered inside but sneaking looks and prods beneath the rugs showed that Aston has taken material quality more seriously than in its sports cars and a new image seems to confirm it. It gets Mercedes’ electrical architecture, with infotainment from the latest generation, classier-looking instruments than in other Astons and fewer obvious plastics. 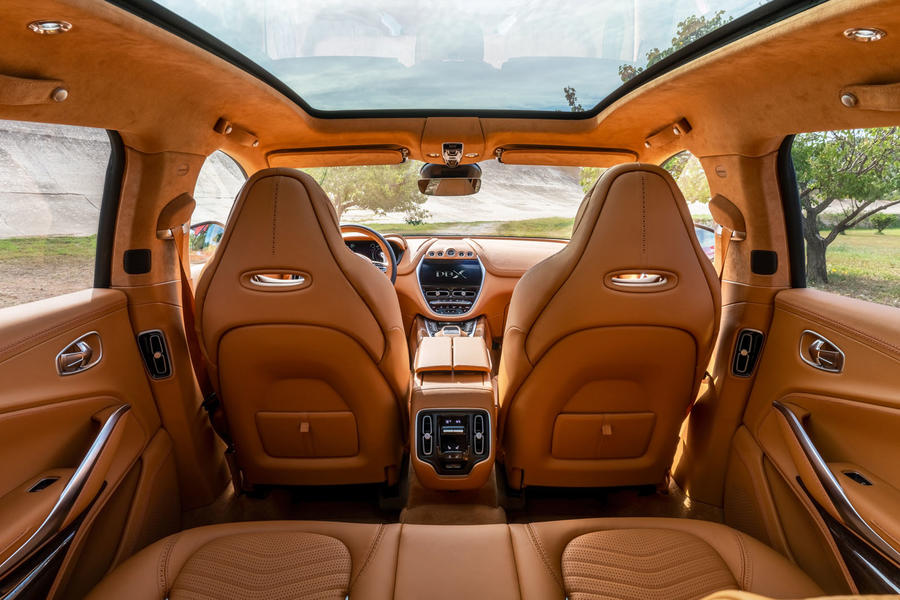 It’s also roomy, seating tall adults behind tall adults with ease and with generous access to the rear seats.

Aston hasn’t confirmed the precise specs but says the DBX has a longer wheelbase than a Bentley Bentayga’s (which is 2995mm) yet is slightly shorter overall (the Bentayga is 5140mm long), meaning little wheel-arch ingress around the back doors. Boot space is 480 litres.

The car we saw was a ‘1PT’ prototype, the first of three phases of prototypes built in Aston’s new plant in St Athan, Wales: 2PT and 3PT will follow, with Job 1 models, the first customer cars, arriving in showrooms in late spring.

Well if I had the money for

Well if I had the money for such things I would love one. Would it bother me some hate it? Nah.
I suspect it will be all the car you could need, fast, luxurious, a great long distance GT car, all weather ability, practical even. Make mine a darkish metallic with a cream interior. Thanks.
si73 7 November 2019

Well if I had the money for such things I would love one. Would it bother me some hate it? Nah.
I suspect it will be all the car you could need, fast, luxurious, a great long distance GT car, all weather ability, practical even. Make mine a darkish metallic with a cream interior. Thanks.

With the exception of all weather ability the rapide Would have been my choice, I say except all weather but I'm sure they could have given it AWD.
The rapide was a stunner to look at and surely covered all bases?

I so wish nobody wanted these

I so wish nobody wanted these miserable, joyless, things.

Aston's best-selling model. Makes sense: stylish in a way Germans can't, practical, and with variable ride-height, you have the choice between sporty oversized hatchback and comfie/luxury people carrier.