BACK TO ALL NEWS
Currently reading: The Grenfell garage electrifying VW's motoring icon
UP NEXT
Fisker goes radical with Pear EV SUV

A VW restoration business was close to shutting down in the wake of a national tragedy, but has turned its fortunes around
Open gallery
Close

It’s a busy day at Jack’s Garage in London’s Notting Hill. On a ramp, a well-worn Mk2 Volkswagen Golf is undergoing an overhaul, a stripped-down Type 2 camper is being reassembled in the bodyshop and the phone is ringing off the hook. There’s nothing to suggest that, just over a year ago, this classic Volkswagen specialist was nearly forced to close in the aftermath of a national tragedy.

It’s difficult to ignore the 221ft shell of Grenfell Tower looming overhead. White sheeting now hides the extensive fire damage, but the legacy of what happened here in 2017 is palpable. Joseph Salama, owner of Jack’s Garage for 12 years, explains how his business’s proximity to the site nearly made continued operations untenable in the months after the disaster.

“Parts deliveries couldn’t arrive, clients couldn’t pick up cars and pay or drop off their vehicles,” says Salama. He also recalls several incidents where he had to calm down customers who broke down upon seeing the tower. “A lot of people don’t register how close we are,” says Salama. “Consciously or subconsciously, if you had a choice to come into the area, the majority of people chose not to.” 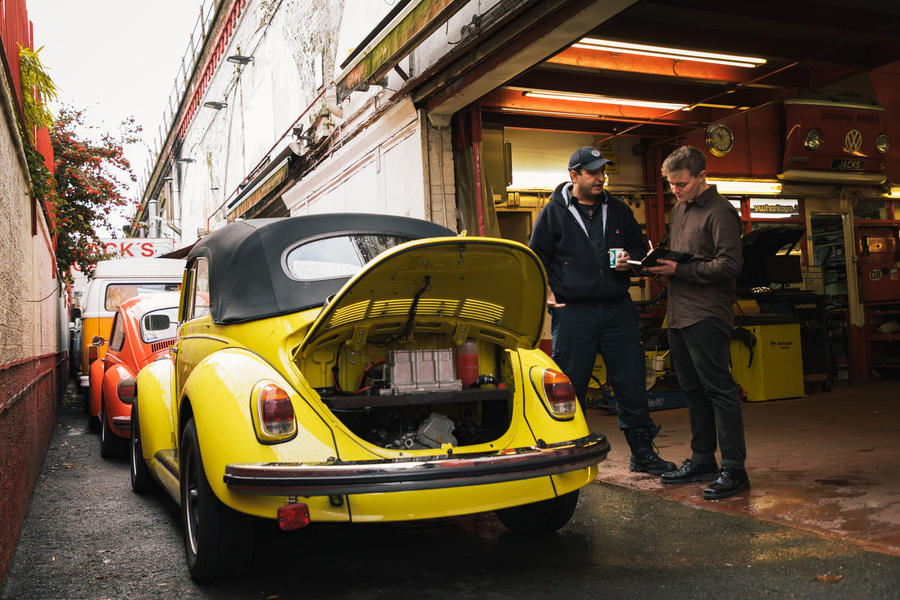 As Christmas 2017 neared and turnover reached new lows, Salama had to start making cutbacks. “A lot of staff left of their own accord, and I had to let a few go,” he says. “The workforce more than halved – we had 14 people, now we’ve got seven.” Two days before the shop shut for the holidays, a threatening visit from bailiffs forced Salama to forego his own salary in order to pay an outstanding energy bill. Things were not looking good, and drastic changes needed to be made.

Which brings us to the yellow Beetle convertible parked outside. To the casual observer it’s a nicely restored example but, in place of the traditional air-cooled engine, you’ll find the Bosch electric motor from the Volkswagen e-up city car. Some will call it sacrilege, but self-confessed ‘dubhead’ Salama is all but converted. “The driving experience is incredibly refined – the weight distribution and handling is amazing,” he says. Driving this car is “terribly exciting” and it’s “bloody fast” to boot.

This electric Beetle (Salama calls this one Bumblebee, for obvious reasons) is the work of German classic car specialist eClassics, and this particular prototype – one of just 10 in existence – is here as a symbol of a new partnership between the two businesses. Following a successful pitch at last year’s Frankfurt motor show, Salama has secured the rights to operate as eClassics’ UK outpost and will begin selling right-hand-drive electric Beetles in the coming months. Demonstrating his enthusiasm for the project wasn’t a problem, he explains, but showing that his charmingly traditional garage could deal with such future-thinking technology was a challenge. 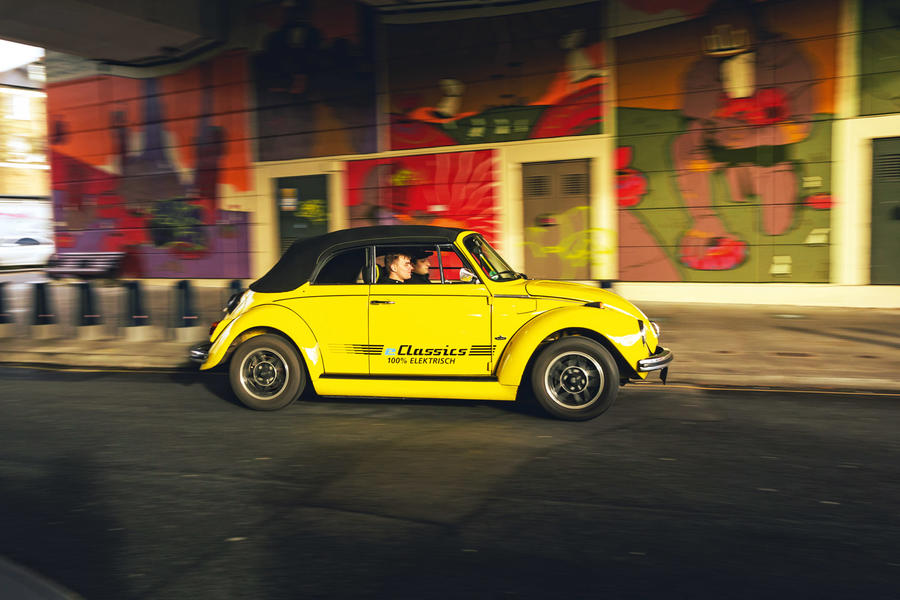 Parked in front of Bumblebee is another electric Beetle, this time a homegrown effort. Once Salama’s daily driver, it has been equipped with a lightly used Tesla battery pack and a universal electric motor from industrial equipment firm Curtis. “This car flies,” he says, “but it’s not refined.” Despite its flaws, this early foray into electrification proved to eClassics that Jack’s was ready to adopt a new way of thinking. “We had a steep learning curve, and I don’t think they would even entertain the thought of having us as a partner if we hadn’t done that conversion first,” says Salama.

Now Salama can look forward to a stable and lucrative future for his business. Jack’s Garage has already ordered an electric Beetle chassis from eClassics, and plans to be driving its very own demo car in the months to come. UK customers will then be able to order a ready-made example from Jack’s or take their own beloved Bug in for the electric treatment. Aside from the performance and reliability upgrades that come with an electric powertrain, Salama emphasises the usability of the modernised classic, thanks to an agreement between eClassics and VW’s Group Components parts arm. “If something happens, you don’t have to get it recovered back to eClassics or London, you can go to any VW dealership and they’ll type the chassis number into the system and access all of the components used in that build.” So not only is the electric Beetle as quick and dependable as the e-Up, it’s arguably equally viable as a daily driver. 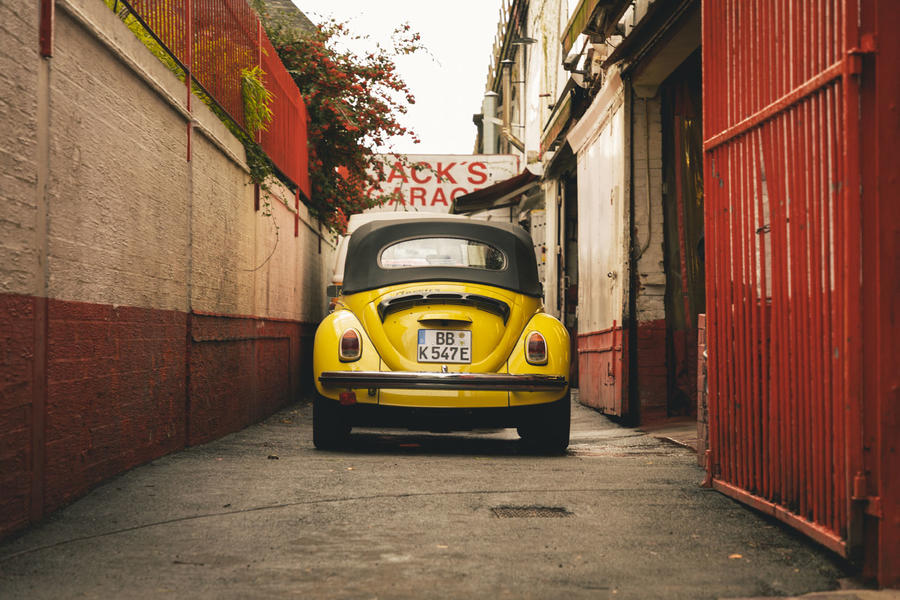 That said, the insectile EV does rather command a premium over the average unconverted example. eClassics will carry out the EV treatment on a customer’s car in Germany from €50,000 (£43,000), but a ready-to-rock example pushes that close to €100,000 (£86,000). That buys a fully restored Beetle with around 100 miles of electric range, regenerative deceleration functionality and a 36kWh battery pack. Added niceties include a reversing camera, sat-nav, uprated sound system and centrally mounted touchscreen. Not bad, really, considering ‘dashboard padding’ is the only optional extra fitted to this reporter’s own classic Beetle.

So could this be the first step towards future-proofing a motoring icon? Diehard VW enthusiasts will have to overcome their loyalty to the Type 1 if so. Even Salama remarks that driving it “feels slightly sacrilegious – with the lack of noise and petrol”, but notes that “there are so many of them – in terms of recycling and upcycling, this is the perfect vehicle of choice”. It certainly won’t boil as much blood across the classic car community as Aston Martin’s electric DB4 or the Jaguar E-Type Zero, and the fact that eClassics has official backing from VW is testament to the ongoing value of the car maker’s heritage. “Look at other manufacturers,” Salama says. “They do one or two conversions, just as marketing tools to show they can do it. VW has taken a different route.” It’s worth noting that after eClassics first showed the electric Beetle to VW’s top brass, it was apparently secreted to the driveway of a Mr H Diess for the weekend at his request… 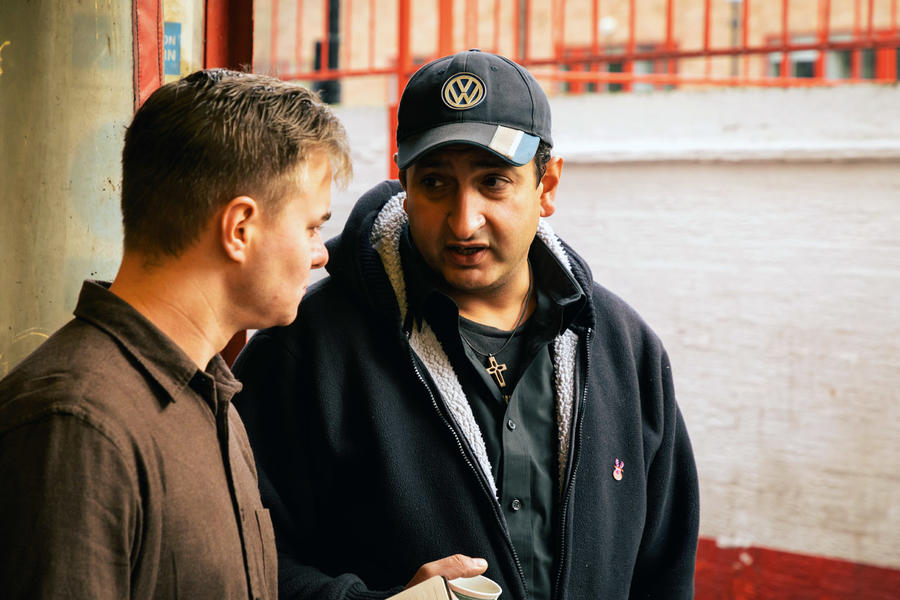 Looking up as the sun passes behind Grenfell Tower, Salama explains that, in the wake of the tragedy, his focus is firmly on the future. Classic cars will still be his garage’s bread and butter for now, but he notes: “If you don’t move with the times, you get left behind.” Just a year ago Jack’s was down to a skeleton crew, but expansion is now on the cards and Salama is plotting a recruitment drive to cope with the EV conversion workload – and potentially the construction of an eClassics showroom for the UK.

Unlike many independent mechanics, Salama is embracing the challenges of electrification and is aware of the need to change our way of thinking. “The ICE industry is dying globally – and anybody in this industry who hasn’t accepted that needs to re-educate themselves,” he says. It’s not what you might expect to hear from someone whose average to-do list includes carburettor rebuilds, exhaust welding and fuel pipe replacements, but it does offer a pretty good idea of what the future of the classic car looks like.

Well this is strange. There’s no overpowering aroma of petrol, the door shuts on the first try and moving the gearlever is a one-man job.

Even before setting off, the eClassics Beetle has proved a much more refined steer than its conventionally fuelled counterpart, and although you still need to physically turn a key, the resulting off-beat clatter of an air-cooled boxer engine is notable by its absence. 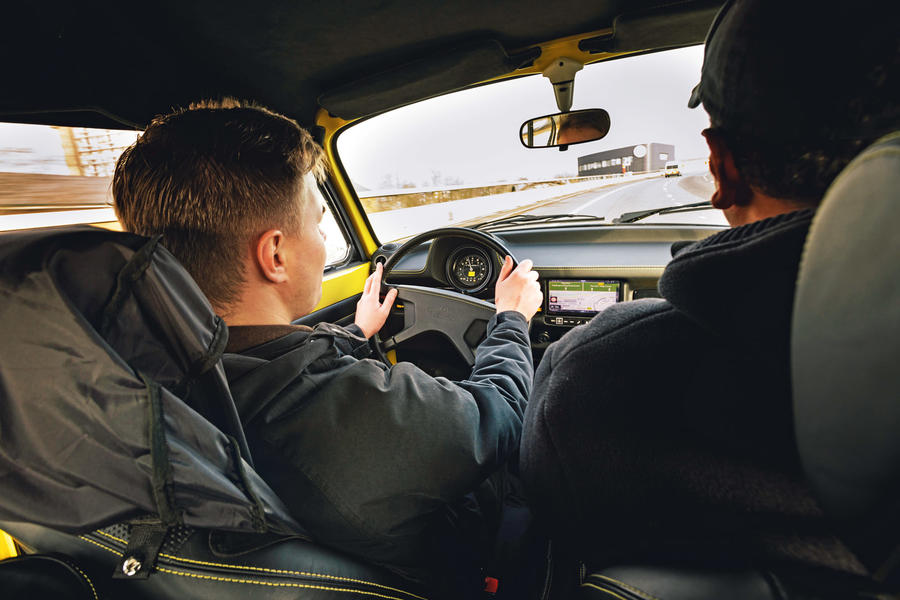 It helps to forget the charms of the original car, but the task is made all the easier by Bumblebee’s linear acceleration curve and unflappable road-holding in corners. It genuinely feels sporty; overtaking manoeuvres are dispatched in seconds and a few spirited laps of a quiet roundabout show how the effects of a 350kg weight gain are all but cancelled out by vastly improved weight distribution. The brakes – from Porsche, in the case of this prototype – are uncharacteristically effective, too. That said, the accelerator is still far too close to the brake pedal (despite the absence of a clutch), the steering wheel remains much too large for such a small car and our back-seat passenger may not walk again for several days. In short, for all its improvements, this is still a VW Beetle – and it’s none the worse for that.

This article was originally published on 8 February 2020. We're revisiting some of Autocar's most popular features to provide engaging content in these challenging times.

I ve no problem with this

I ve no problem with this sort of thing, the car sounds interesting etc, but most "casual observers" are likely to say "Who put those stupid skirts on that yellow Beetle? It looks ridiculous".

Each to their own, of course,

Each to their own, of course, and good luck to this guy,  but for me, the sound of the flat four air cooled engine is a major part of the appeal of the original Beetle.  I'm not too keen on the massive sills on the model tested too, what are they for?

I love the idea