BACK TO ALL NEWS
Currently reading: Better off alone: How Niels van Roij carved his own path
UP NEXT
New 2023 Porsche 911 GT3 RS is "most track-focused" ever

Better off alone: How Niels van Roij carved his own path

After an unusual route into car design, Niels van Roij ploughed his own furrow to become a prominent figure in the renaissance of exclusive coachbuilding. We find out more
Open gallery
Close

Niels van Roij is unusual in the car design world in that he has never worked in the studio of an established car manufacturer, serving his time at the drawing board and sketching relentlessly for years. Taking an unconventional route from the Royal College of Art (RCA), he has found himself in an almost unique position.

Aged 36, the Netherlands native now has a thriving business based in Greenwich, London, creating one-off coachbuilt cars for the kind of affluent collector who prizes exclusivity or wants to take the traditional ‘customisation’ offered by super-premium makers further. Indeed, Rolls-Royce is now following the trail blazed by van Roij, with its new ‘whole car’ custom-build programme.

I first met van Roij eight years ago, when he was working with a company called Car Design Research. I had been invited to the RCA in London to take part in research for an undisclosed manufacturer, and van Roij was the inquisitor.

It didn’t take long to realise that the research was about attitudes towards Volvo and how the brand might reinvent itself after being acquired by Chinese company Geely.

The Dutchman had just ended two and a half years working on one of the entries for a new London taxi competition. The project was being run by Turkish vehicle maker Karsan, and van Roij had been approached to work on the design after he graduated from the RCA in 2012. 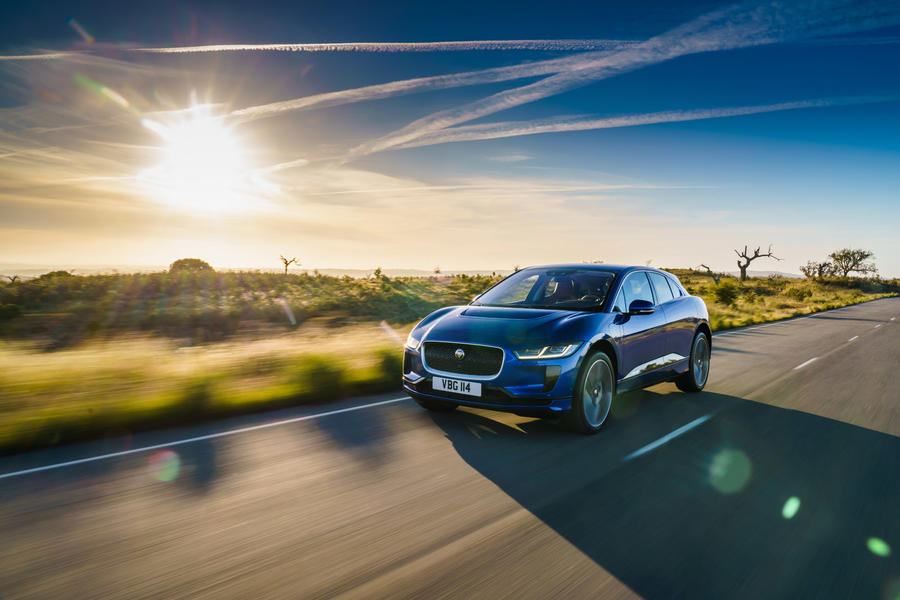 He recalls: “I was based at the Helen Hamlyn Centre for Design [an RCA-associated venture that has long specialised in projects emphasising accessibility]. We built a full-size styling buck and carried out a lot of research with cabbies. We interviewed them and went into their shelters, one of which is right opposite the RCA. We also held workshops with elderly, blind and pregnant people, all testing the buck for accessibility and comfort.”

Van Roij was recommended to work on the Karsan taxi because it was an ‘inside-out’ project, one that was driven by the interior package. His RCA degree project was a proposal for a car interior, rather than for yet another supercar.

“I’m the sort of car designer who has been drawing cars since the age of three or four, and my mum still has my drawings,” he says. “As soon as I knew of the RCA, I had it in focus, and my goal was always to go there.”

Van Roij says that his final project at the RCA was an “inclusively designed car interior; a working model made of foam that you could sit on”. He elaborates: “It was focused on people growing older and what to do with those who want to retain their mobility. It was a study in ergonomics. I also worked with an optometrist and conducted a lot of tactility research.” 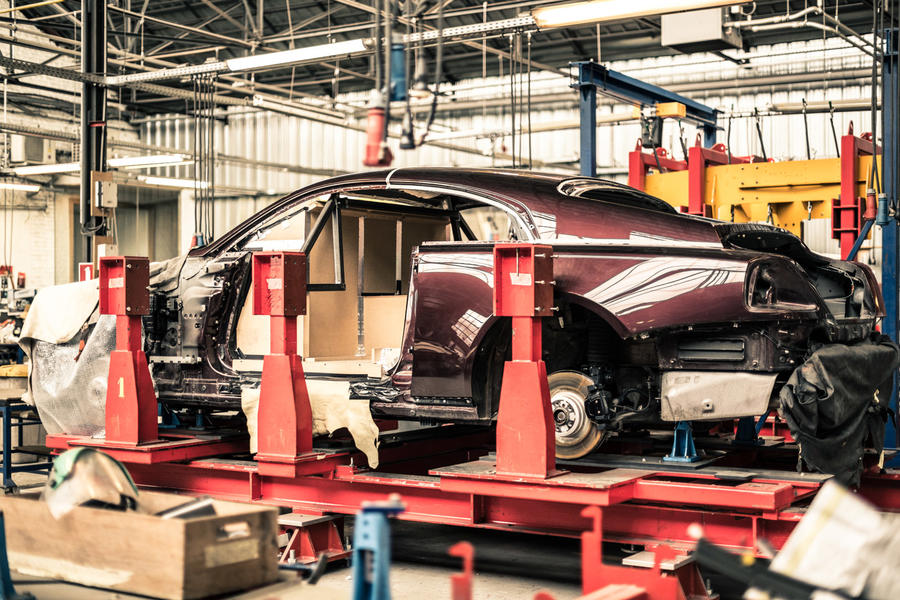 After the Karsan taxi project was wound up, van Roij found himself in a difficult position. “I realised I had nothing to show in portfolio for two years’ effort [it being a confidential project],” he says. “Then the stars aligned. A friend in the Netherlands contacted me and said: ‘I have this weird question for you. I have a friend who wants to convert their Tesla Model S into a shooting brake. It’s probably nothing you want to work on but I wanted to share the message.’

“It was perfect timing. I had a couple of connections in coachbuilding, and the initiator of the Tesla project had already connected a coachbuilder that had built a Tesla hearse, so they understood how to work on it.”

Coachbuilt one-offs seem an uncannily perfect fit for someone who had spent the previous few years primarily working directly with users and passengers, rather than turning out endless glossy renderings of an imagined future.

“The client is ultimately in charge, but the project is just you and the client,” says van Roij. “I approached the project by starting to find out who this person was and to meet with them in their homes and businesses. I asked questions like ‘Why a coachbuilt car?’ and ‘Why base your idea on a Tesla?'"

The project went through “hundreds of ideation sketches” that were discussed together with the client and the coachbuilder.

“In the end, the client directed towards the bold chrome ideation sketch, and that was developed into more refined renderings,” says van Roij. “We went for a specific design in these renderings. And then that was translated by the coachbuilder into hard points and drawings.”

When the 18-month-long Tesla estate project was finished, it took van Roij half a year to find his next one: “Two projects came in very close: the Ferrari breadvan homage and the Rolls-Royce shooting brake. And then the Range Rover coupé, which was actually finished first.” 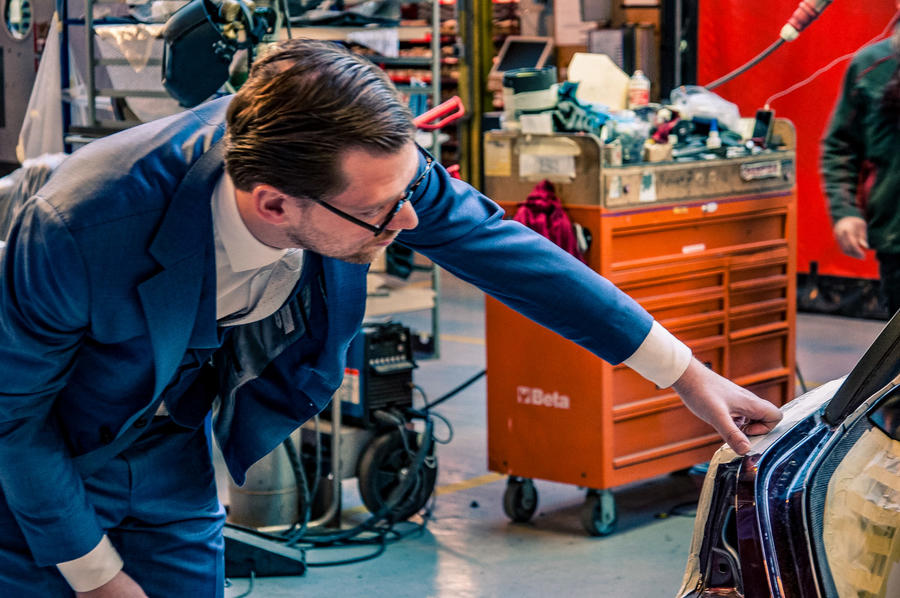 The Range Rover project was especially interesting, because it came about due to JLR’s cancellation of its Range Rover SV Coupé in 2019.

Van Roij says: “The client was disappointed when the SV Coupé was cancelled, so he got in touch. I said I wasn’t going to copy it. The JLR car was a bit more dynamic, so ours should be a bit more formal – a bit more linked to the classic three-door Range Rover.”

The execution of the design meant “the B-pillar was moved by about a foot, the door was stretched by 25cm and the rear fender was redesigned”.

But to my eyes, the sumptuous Rolls-Royce Wraith-based shooting brake is the most successful in van Roij’s portfolio. “This was one of my biggest joys,” he says. “I started in England because I love Britishness, and to be commissioned to the most British of icons was a true honour.”

In fact, van Roij had previous in imagining a Rolls shooting brake while at the RCA: “I was selected by [Rolls’] then chief designer, Giles Taylor, with a selection of four classmates. I think 23 or so of us pitched, and I was one of five selected by Giles to work on our own ideas.”

His later Silver Spectre project was very complex, getting an entirely new inner structure: “We took a Wraith, and everything inside is new from the A-pillar back. A-pillar to B-pillar is one [carbonfibre] moulding. It’s massive: about the size of a BMW 5 Series. It flows continuously towards the back. I didn’t want any shutlines on the roof, which wasn’t the easiest request for [the Belgian coachbuilder] Carat Duchatelet.

“The design went through a lot of different propositions, using cues from history. Small windows are very period and very British. Sitting in the back of a Rolls-Royce, you’re protected by the heavy C-pillar. You can look out, but nobody can look in.”

Unlike his contemporaries, van Roij doesn’t sit in a styling studio, drawing endless variations on the latest theme. He’s outside the furious efforts that are going into stylistic automotive reinventions as part of the age of electrification.

What does he make of today’s production design? I propose that it seems Transformer-like styling has a grip on cars such as the Audi A3 and BMW 1 Series. As for the Volkswagen ID 3, it strikes me as remarkably simplistic, lacking a good dose of fine detailing. Does the car industry know where it is? 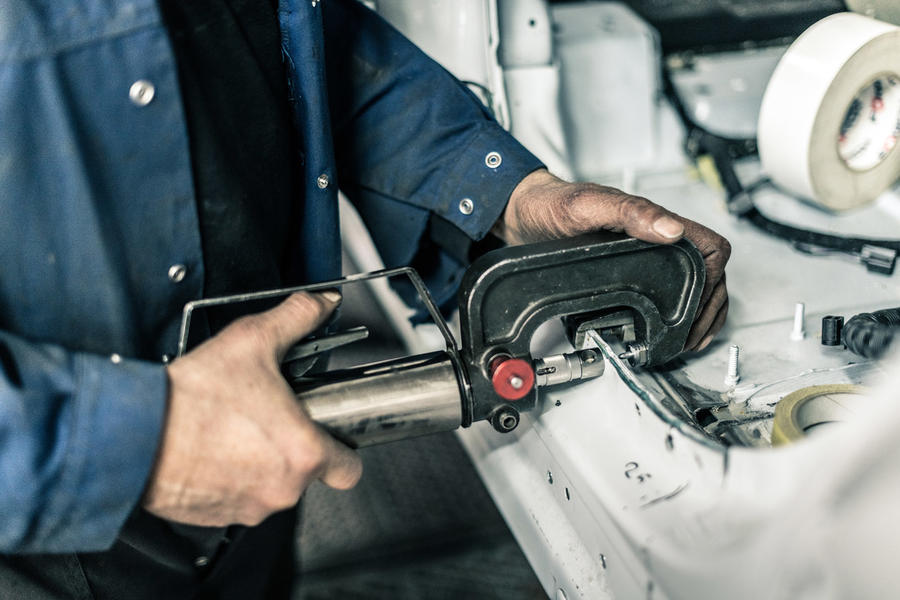 “If you ask the question, you almost know the answer,” he replies. “To be fair, this is the most difficult time in car design since 100 years ago, when we started putting the horses in the stables and engines in the carriages.

“It’s difficult in the automotive world, after a 100 years of prosperity, to now basically change everything we’ve been doing. Some brands seem to be more comfortable with that than others. “I think the German brands are rather lost. You mention Audi; the first-generation TT made Audi premium overnight – something they had been pushing so hard for. So it was one piece of car design properly executed inside and out: proper in their design, honest about their Germanness and the Bauhaus heritage.

“Honestly, that’s missing today. Trying to look like there’s a massive petrol engine in front when there’s not. Why? Why not be honest? The Mercedes-Benz EQS [electric limousine] still looks like an AMG but the massive air intakes are fake: they’re 100% closed. What’s the story? And this Transformers look: why all this anger?”

Van Roij believes that nothing about today’s Audis says ‘Vorsprung durch Technik’. “The only thing I can imagine is they invested in this body-pressing technology so they have to have endless creases in the door,” he says. “There’s no need for that.”

He does, however, single out Jaguar for praise: “The I-Pace is a great piece of innovative design. It’s a great use of package. It doesn’t pretend it has a V8 under its bonnet, but has a cab-forward shape. It’s not very Jag-like but still works. That’s an electric car that’s happy with itself.”

On the other hand, he feels that Volkswagen’s ID 3 and ID 4 EVs are “very unpleasant in their proportions and very slab-sided”. He explains: “They don’t look substantial. If you look at a Golf Mk4, that’s a solid piece of design. Its curves made it look solid. It had shutlines in perfect harmony to create this pure solidness, without looking aggressive at all.”

“I like the Hyundai Ioniq 5,” he adds. “That’s the way to do retrospective: forward looking. It has the family blood, but it’s new. It has interesting interior features, such as a reclining chair for when the car is recharging. It’s light years ahead of what VW is doing with the ID range.” 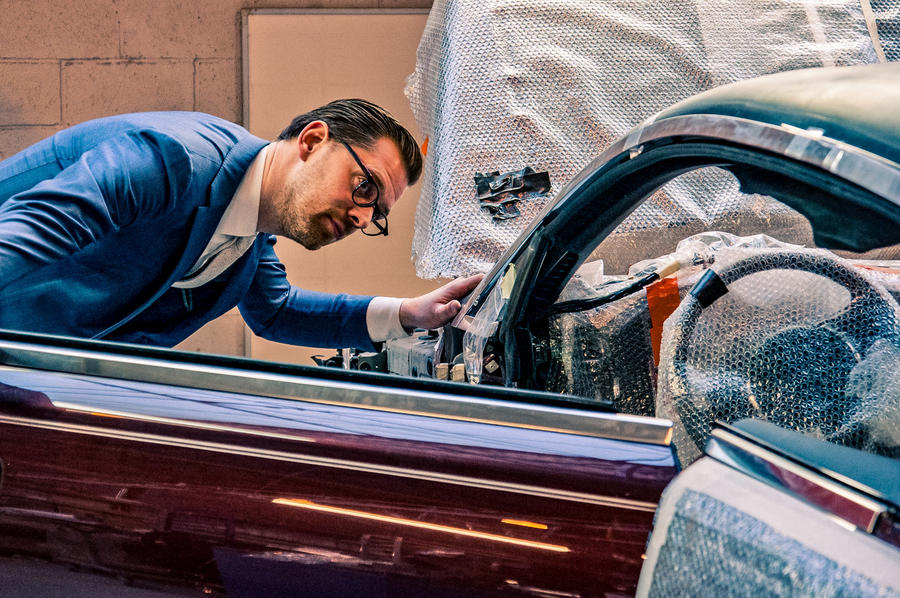 Porsche is a contemporary favourite of van Roij’s. “The [electric] Porsche Taycan is a fantastic piece of design,” he says. “But it has no physical switchgear.” He dismisses this as being “a showroom gimmick”.

He then pulls out a fascinating design insight that’s one of the best arguments against the march of the giant touchscreen that I’ve yet heard. “During my graduation project, I worked with an optometrist,” van Roij says. “He pointed out a very interesting insight into BMW. In the 1970s, the firm did a lot of research into their interior lighting; the whole lot, including the dashboard and clocks. They found out that you don’t want a high-contrast [display]. You just want sufficient contrast.

“With a high-contrast screen, your eye is drawn towards it. It’s effectively distracting you, and it can leave your eyes strained and tired. So way back, BMW created this ochre-orange glow for its cars. Sufficient contrast, which helps you when you’re looking inside the car, and then refocusing is easier, especially in darkness.”

It sounds obvious when you hear it expressed so simply.

Van Roij has found himself on the cutting edge of a new automotive trend: that of hyper-exclusivity. It’s a trend that Rolls-Royce has recently found it irresistible to join. It seems like a market niche that has legs, and one that has enabled van Roij to avoid years of drawing in studios and leap straight into the creative driving seat.

Great piece and so good to get an insight of what a real designer thinks of the new models being churned out.