Volkswagen has unveiled the ID 4 and said the new SUV represents a “milestone” as the first model in its electric ID range that will be offered globally.

The new machine will go on sale in Europe later this year and, unlike the recently launched ID 3 hatchback, it will also be built and sold in China and the US.

Volkswagen is aiming to sell 1.5 million electric cars per year by 2025 and estimates the ID 4 will account for a third of that total.

It is is based on the same MEB electric platform used for the ID 3 and will eventually be offered in both rear- and all-wheel drive, with four different power outputs and two choices of battery size. A range-topping hot ID 4 GTX with 302bhp is also under development.

The ID 4, including UK right-hand-drive cars, will initially be built at VW’s Zwickau plant in Germany. As with the ID 3, the first versions produced will be limited-run First Edition models, featuring 201bhp and 229lb ft from a single motor driving the rear wheels and a 77kWh battery.

It will compete with the Kia e-Niro, currently Europe's most established affordable electric SUV, as well as the upcoming Tesla Model Y and Mustang Mach-e. 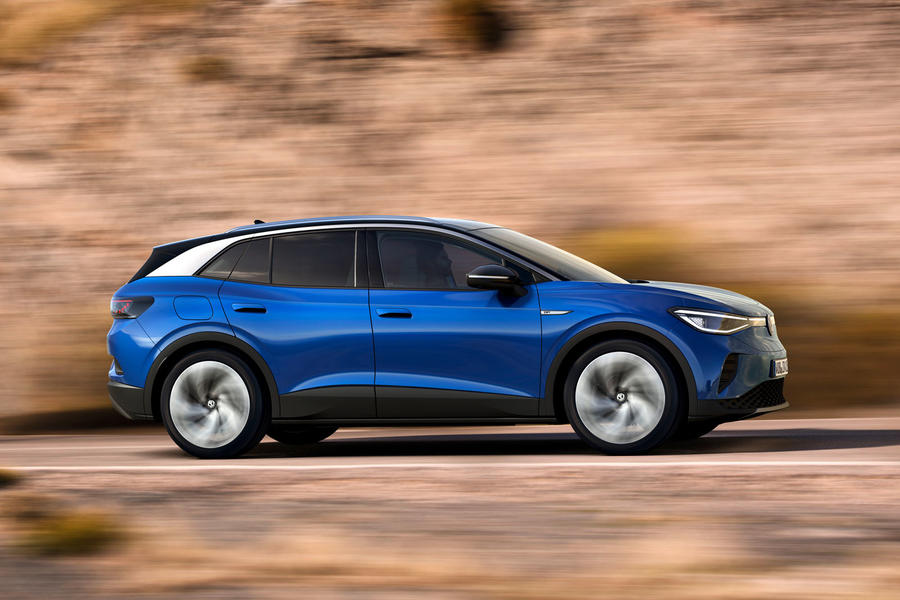 The ID 4 will also be offered in rear-drive form with 146bhp and 168bhp with a 52kWh battery, and 173bhp with the 77kWh unit. The twin-motor, all-wheel-drive GTX range-topper will follow next year alongside a 262bhp version, both using the 77kWh battery. The larger battery can be charged at up speeds of up to 125kW.

The design of the ID 4 draws heavily on the styling of the ID 3 hatch, with much work focused on optimising the aerodynamic efficiency of the SUV’s body. The firm claims it has achieved a drag coefficient of 0.28.

The ID 4 features LED lights as standard, with VW’s automatically adjusting IQ Light system as an option. The First models will be offered with 20in and 21in wheels.

The long wheelbase and relatively short overhangs mean the ID 4 has a turning circle of 10.2m and they also increase the interior space. As with the ID 3, the interior features an open, minimalist design with large touchscreens, which are compatible with voice control, replacing much of the physical switchgear. A ‘rocker’ switch attached to the steering column is used to select the three drive modes. The central touchscreen is 10.0in in the First, with a 12.0in version in higher-spec models.

The boot offers 543 litres of storage, which expands to 1575 litres with the rear seats folded down. The car can tow trailers weighing up to 1000kg. 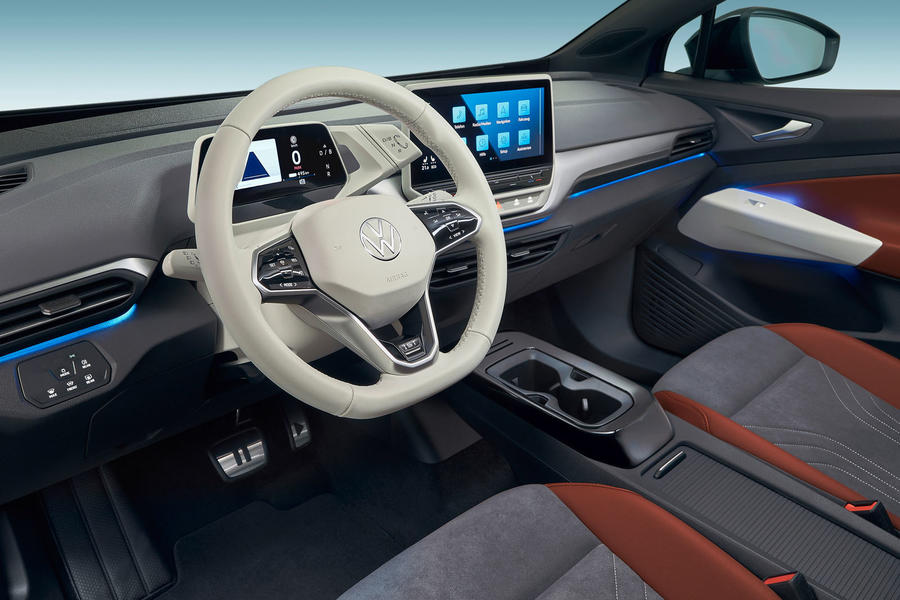 The ID 4 features interactive services through VW’s We Connect Start system, with a range of the firm’s IQ Drive assistance systems offered, including lane assist, braking assist and adaptive cruise control. The electronics are powered by a new system built around two computers, with updates available over the air.

The chassis features MacPherson struts up front and a multi-link set-up at the rear, with optional damping control offered. Progressive steering, with which the steering ratio becomes more direct as the wheel is turned further, is also available on certain models.

First models offered in Germany will feature a range of exclusive colours, along with tinted rear windows, a reversing camera and heating for the seats and steering wheel. The higher-level Max models add further upgrades such as LED matrix lighting, a panoramic glass roof and an electrically operated boot.

VW claims the production of the ID 4 at Zwickau is entirely carbon neutral.

It has the same cheap interior that makes Dacia lough.
Digsy 24 September 2020

Looks like every other small SUV. Should do well then.

I like the ID4 but the price is too high IMO, the Enyak with a starting price of 30k is better value and it has a battery of 62 Kw which is more than the basic ID4. If I had the money for a high spec ID4 I would plump for the Mustang with longer range, better performance and a huge screen