When KERS – that’s kinetic energy recovery system – was introduced to Formula 1 back in 2009, it seemed an excitingly forward-thinking innovation. In fact, its complexity made it so expensive that the teams agreed not to use it for the 2010 season.

Just over a decade later and not only are F1 cars now full hybrids with KERS systems that can contribute 160bhp, but also KERS technology is rapidly being fitted to everyday road cars.

And perhaps surprisingly, it’s Suzuki – a mainstream manufacturer less suited to billion-dollar motorsport you couldn’t find – that has become the first to apply it to every car in its UK line-up. So yes, that encompasses the Suzuki Swift supermini, the Swift Sport hot hatch and the crossover trio of Suzuki Ignis, Suzuki Vitara and SX4 S-Cross, the last of which we’re driving here.

Of course, this system is far from as comprehensive as that you’ll find in Lewis Hamilton’s Mercedes, but it is an upgrade on that pioneered by Suzuki in 2016, with 48V electrics over 12V.

The basic idea is this: energy that would otherwise be lost under braking and throttle-off cruising is harvested and then sent to a small lithium ion battery under the front passenger seat. From there, it’s dispatched to a belt-driven integrated starter/generator (ISG) during stop/start driving.

Another feature, which isn’t yet common among so-called mild hybrids, is that the 48V Suzukis can idle and even coast below 10mph on electric power. When you’re stationary or depress the clutch pedal at around 1000rpm, fuel injection makes way for the electric component to control engine idling.

The end result of all this, according to Suzuki, is considerably more torque, an improvement of up to 15% in fuel economy and as much as a 20% reduction in CO2 emissions, at the penalty of only an almost insignificant extra 15kg in overall weight.

Indeed, the peak torque output of the S-Cross’s turbocharged 1.4-litre four-cylinder petrol engine has risen not insignificantly from 162lb ft to 173lb ft. However, you may be surprised to see that power has actually fallen, from 138bhp to 127bhp.

That’s because this car has not merely had a mild-hybrid system bolted on but also introduces the latest evolution of the Suzuki K-series engine, which contributes to the efficiency improvements made. 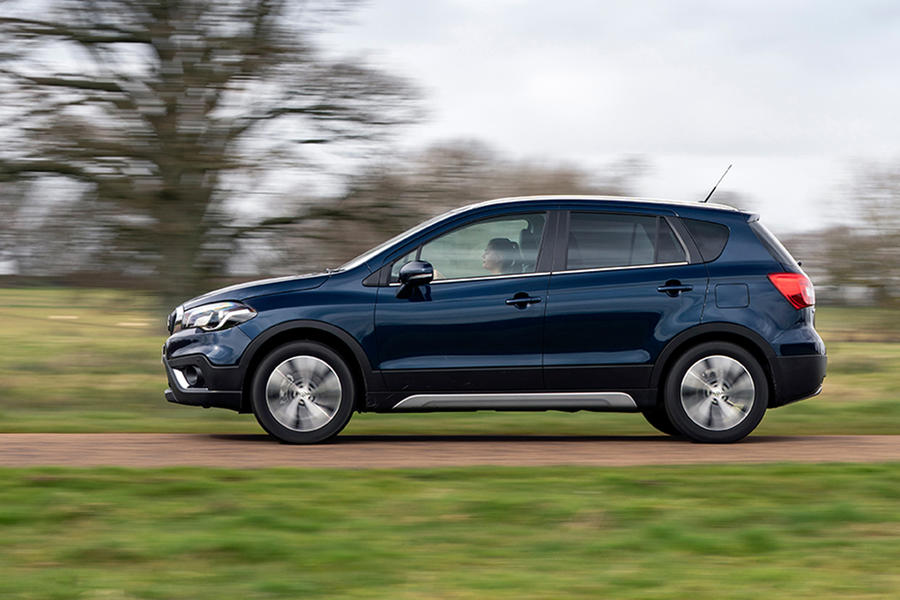 Despite this, it doesn't feel that much different out on the road. The engine pulls from low revs with more than enough strength for town work, with a 0-62mph time of just over 10sec. And it certainly isn't out of its depth on faster roads, either, because it’s commendably flexible when hooked up to the six-speed manual gearbox – no doubt partly thanks to helping hands from the ISG.

Indeed, you can only really detect that this S-Cross is electrified when you lift off in lower gears, thanks to the usual sensation of engine braking being noticeably stronger as energy is captured. Don’t get us wrong: it’s no Nissan Leaf – you still absolutely need to use the central pedal – but the sensation of regeneration is present, unlike with Suzuki's old 12V set-up.

As for the actual benefit of this, we averaged 38.7mpg over 200 miles of mostly motorway but also some town duty (not at all congested, for obvious reasons), during which time the computer says the electric idling saved me a cute 0.06 gallons of fuel.

That figure is admittedly short of the official 45.4mpg, but it would no doubt be higher if it had not spent so much of its time at 70mph – and those 12V Suzukis have an impressive track record in my experience.

The biggest weakness of the S-Cross continues to be its suspension. The primary ride is nothing to write home about, but you might put pen to paper in complaint about the way that small intrusions are dealt with. The car feels rather brittle at low speeds, alerting you to potholes and such, fidgeting all the while. All of the family will feel much more comfortable in something like the Skoda Karoq.

The flipside of this is that the S-Cross actually corners rather tidily, without excessive body roll or a desperation to show you what understeer is. While we’d still point you towards the nimbler Seat Arona if you want a low-cost crossover that can provide some fun on a country road, the S-Cross isn’t quite a domestic appliance.

It should be said that the Arona has nicer steering as well, but that’s not to say the S-Cross’s isn’t consistent and well weighted; it’s just not one to inspire confidence.

The powertrain of this car may be new, but this S-Cross is fundamentally the same one that came out seven years ago. This means it remains spacious enough up front, provides acceptable rear head and leg room for adults under 6ft and has a boot on a par for the segment.

It also means the interior feels quite old-school, with a lot of hard and scratchy plastics throughout and an infotainment touchscreen that could have been bought from an aftermarket car parts supplier, with dated-looking graphics and a propensity for lagging.

At least nothing feels flimsy and everything is positioned where you would expect to find it, while you get the requisite tech features of a DAB radio, Bluetooth and sat-nav, plus Apple and Android smartphone mirroring to get you away from that native software.

Best of all, though, top-rung SZ5 trim gets a proper full-length sunroof that actually opens. When did you last see one of those? Lovely. 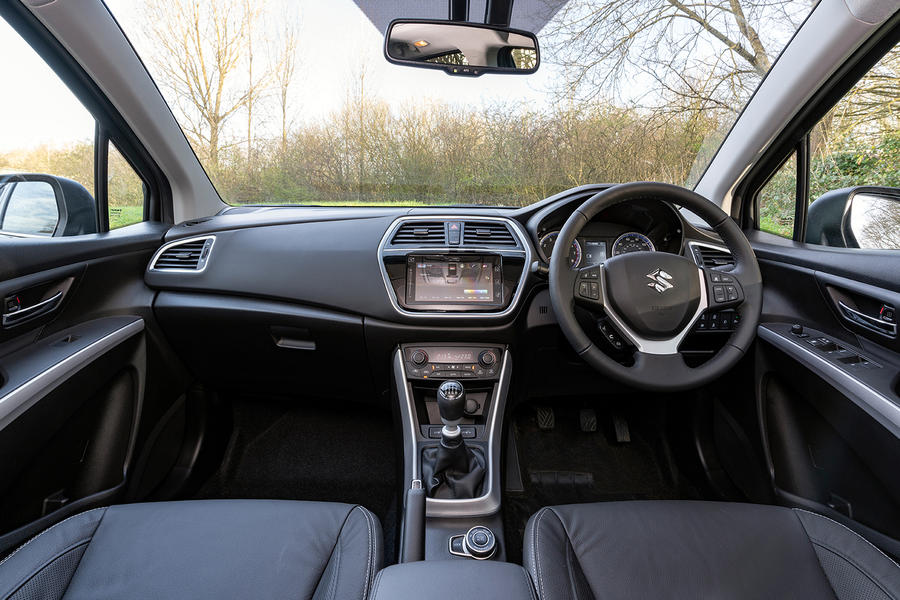 Suzuki should be praised for the speed with which it has managed to act in electrifying its model range so as to reduce its CO2 emissions.

The theory behind its new 48V mild-hybrid system appears to hold water, even if the economy improvement over the old 1.4-litre S-Cross might not quite hit the claimed 17%, and every little helps for manufacturer, customer and environment alike.

The downside is that this is predicted to add another £2000 or so to the list price across the board, which would dent the recommendability of a car that in other ways has not changed.

You see, there are a number of similarly priced crossovers around now that also employ mild-hybrid tech, and the best of them by far is the Ford Puma, which is genuinely enjoyable to drive – no caveat. So even if you’re not bothered about the mild-hybrid tech, that’s the direction we would now point you in.

A unique selling point for the S-Cross, then? Well, countryside dwellers might well be swayed by the fact that it offers lockable four-wheel drive. 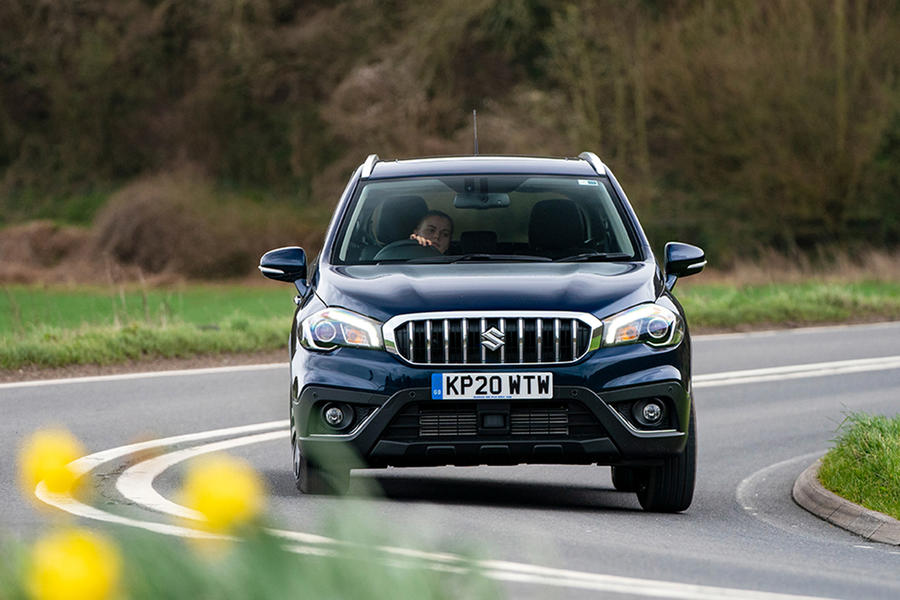 Blame some peoples beloved EU, they keep wanting more stuff bolting on weighing the car down and adding cost whilst expecting miraculously cleaner engines. If Suzuki (and others) have to bolt on stupid piddly 48v systems that cost money to try to get nearer the EU mandate then of course you have to pay for it.
xxxx 6 April 2020

In a BMW they're an extra!