From £26,0459
Skoda’s value-championing executive car gets some mid-life revisions, but is it still as brilliant as it was in 2015?
Open gallery
Close

Perhaps that’s a touch harsh, but the figures speak for themselves: of the roughly 8500 Superbs that rolled off forecourts last year in the UK, 83% are said to have been supplied to the fleet sector. Skoda isn’t ashamed of that, and nor should it be.

Five years ago, you would have been able to say with a healthy degree of certainty that if your neighbour, Mike the Area Manager, proudly announced that he would be receiving one as a sparkly new company car to help him nail his KPIs, your first experience of it would be the unmistakable clatter of its diesel engine emanating through your kitchen window.

But times are changing and the diesel mix of fleet and private cars alike is dropping off. The Superb mix is down to 66% oil-burners this year - still the dominant fuel but falling away. There’s every reason, then, that a user-chooser might look towards this 1.5-litre TSI petrol engine instead.

That engine joined the Superb range very late last year, but for 2019, there’s also some mild visual updates: a lightly redesigned front end, new matrix LED headlights, extra chrome all round, ’Skoda’ spelled out across the bootlid, as has become the fashion, and a couple of new colours.

The interior tweaks are even more minor, centring around a new infotainment screen design and the addition of the firm’s Virtual Cockpit digital instruments as an option. But there’s now also a suite of more advanced safety systems, including predictive cruise control that reads road signs and an emergency assist function for multi-lane roads that's claimed to be able to steer you out of the path of a stationary car in front if it can’t brake in time. 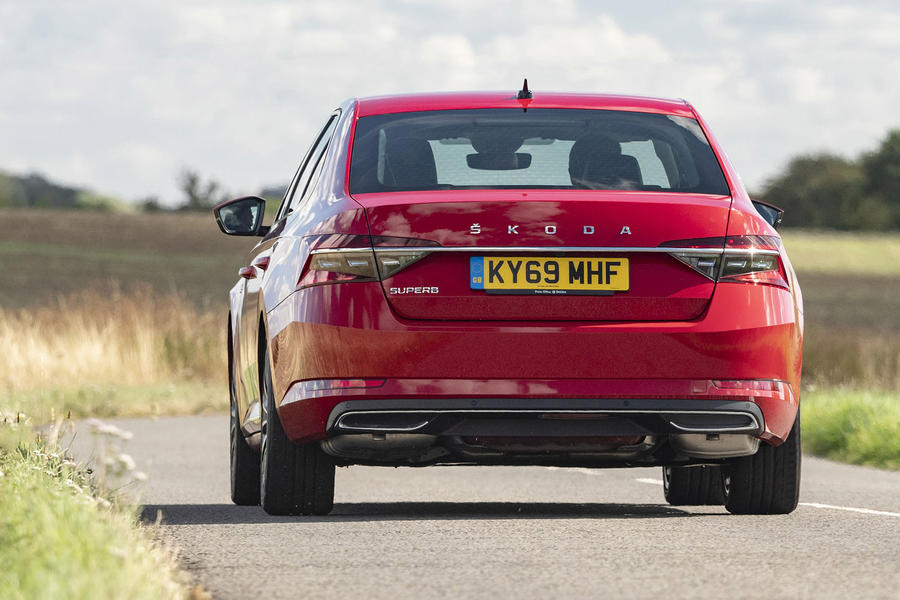 This car is a welcome reminder that buyers really shouldn’t be turning their backs on D-segment non-SUV models at the rate they are.

Although the Superb is much the same as before, the minor visual tweaks reinforce the classlessness and universal appeal of the Superb. Go for a modest wheel size and colour combination and it strikes that perfect balance between looking elegant enough to avoid anonymity and being too showy and overstyled for its own good. Like the Volkswagen Golf, it’s the kind of car that can pull up outside a swanky hotel, sit in the managing director’s spot in the office car park or pick up drunks at a taxi rank in the early hours without ever looking out of place.

Image aside, it’s the big Skoda’s sheer box-ticking competence that’s difficult to argue with. Little has changed in that respect, and little needed to.

For starters, it’s still a huge amount of car for a relatively modest outlay. Yes, the (more expensive) Skoda Kodiaq has stolen the show in terms of versatility, with its seven seats, yet nothing in the D-segment comes close to offering the Superb’s palatial rear-seat room. As before, If taking four of five long-legged adults long distance in comfort is your priority, you’d have to spend vastly more to find something comparable.

You don’t feel like you’re skimping on quality, either. Granted, it’s not the most visually arresting environment to sit in, but the money that Skoda could have spent on flamboyant surfacing and glitzy design details was instead invested in creating an intuitive, functional, clean and solid place to while away the hours.

This is what Skoda has down to a tee: a driving environment that might not wow initially but has the ergonomic essentials bang on and requires no getting used to because everything is where you expect it to be and it just works, properly. However, it's a shame once again to see Skoda bow to the trend of replacing physical infotainment menu buttons with fiddlier touch-sensitive items.

The driving experience is much the same as before, meaning the Superb pretty much nails its brief as a long-distance cruiser that isn’t too wayward in the bends. It’s clear where the bias is: it’s most at home wafting along at a relaxed gait cosseting passengers, rather than being hurried along a B-road making them feel sick.

Even with the non-adaptive set-up here, and with relatively modest 18in wheels, it has a fluidity and suppleness to its ride that no SUV near this price point can get close to. It's still caught out by the worst potholes around town, but overall you'd struggle to find a more comfortable new car for the cash. Our test car generated a touch more wind rustle around the B-pillars than expected, but we're nitpicking.

The Superb is by no means a disgrace in the bends, either. Yes, body lean is quite apparent in fast cornering due to the soft spring rates, but the classic MQB platform attributes remain: there's loads of grip, it changes direction keenly and predictably, and the steering is nicely weighted and provides a semblance of feedback.

This is also the first chance for us to try the 1.5-litre petrol motor in the Superb. Many may be wary of a unit of such modest size in something as wieldy as this, yet with it fitted, the Superb is lighter than you might think - significantly lighter than the diesels and higher-output all-wheel-drive petrols.

Although it lacks the effortless low-down shove from near-idle of the diesels, the 1.5 TSI is perfectly peppy enough for most needs once above 1500rpm or so and it rarely feels strained or overburdened. Keeping it on the boil isn't a hardship thanks to a tight gearshift and predictable clutch action, either (no kangarooing here), but there's an argument that suggests the more relaxed approach of the diesels suits the car better.

Take it easy, though, and you’re rewarded with mechanical refinement that no oil-burner can match and, thanks in part to the cylinder deactivation tech that brings a slight refinement shortfall when activated - excellent fuel economy. Our 200 miles of mainly motorway driving mixed with a bit of town action and a few acceleration runs yielded an indicated 46mpg. We’ve no doubt that could be pushed into the 50s on a gentler cruise. 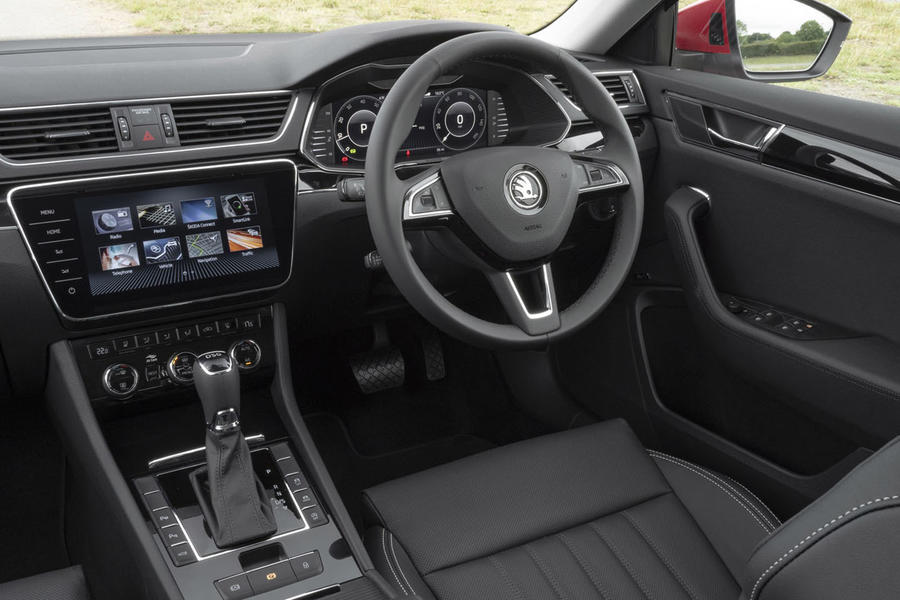 Absolutely. That buyers are turning their backs on cars such as this in favour of (generally speaking) pricier, heavier, less efficient and more dynamically compromised SUVs is a pity, but it now makes cars like the Superb more exclusive and left field.

Putting that to one side, is the Skoda still the best of its breed? A Mazda 6 is a more engaging steer, a Vauxhall Insignia slightly better value for money and a VW Volkswagen Passat that bit more polished. But if you could do a football-game-style pentagram that visualises a player's attributes (if you know, you know), it would be the Superb that best balances affordability, comfort, perceived quality, performance, handling and space. It's also full of Skoda's little practical touches. As a package, it's very hard to argue against.

Sweet baby Jeebus DO SOMETHING ABOUT THE SPAM!!!

Don't know about footbal-game-style pentagrams, but yee olde regular pentagrams have five ( ence, penta ) points to them. so...

Also, please delete the spam from the comment threads. Thank you.

For a similar price

you can get an Insigna 1.6 petrol turbo 200bhp Elite Nav,  or a Mondeo Titanium Hybrid and Skoda are supposed to be a budget brand..

kind Daniel Joseph, it is obvious that this change is more than anything to increase the visibility of the brand in non-traditional markets.

I also find it odd that Skoda should retain the circular logo for the front grille but lettering at the back.

I guess it's because you spend far more time when driving looking at the back of the car in front than the front of oncoming cars, so that's where the marque name is most prominent.  Actually, it's a very long time since (European) cars carried their brand name in prominent separate letters across the grille or leading edge of the bonnet, apart from Land Rover and Range Rover, of course.  1970's Fords, come to mind, before the reintroduction of the blue oval badge on the Mk4 Cortina.