From £70,4708
The S-Class is as luxurious, refined and long-striding as any grand tourer in coupé form, with a chassis and an engine of particular talent
Open gallery
Close

Because, these days, if you like the idea of owning and driving an S-Class but don’t like the idea of driving around in a stretched four-door limousine that looks as if it is on a permanent shuttle run between the airport and the nearest five-star hotel, you can have an S-Class Coupé or Cabriolet instead.

In previous years, Mercedes gave these high-end two-doors their own model nomenclature (remember the CL and the SEC before it?), but now it thinks the S-Class family "wants to be together".

And having just updated the S-Class Coupé range, Mercedes has neatly plonked this 560 model at its base. A direct replacement for the S500 turbo V8, the S560 produces marginally more power than its antecedent and the same 516lb ft of torque, despite only having 4.0 litres of displacement in place of the S500’s 4.7 litres.

That’s what you get when you replace a Mercedes engine with one made by AMG. The S560’s V8 is, after all, within a whisker of the same state of tune in which it powers a Mercedes-AMG C 63 super-saloon (making marginally less peak power but more torque), and it makes the rear-driven S560 good for 62mph from rest in just 4.6sec — with a brace of fully fledged, even-quicker AMG derivatives available farther up the range, should you want them.

The S560 comes with plenty of trimmings you’d have to pay extra for on lesser Mercedes models, such as Airmatic air suspension, a widescreen Comand infotainment system, Burmester surround-sound stereo, massage seats and wireless smartphone charging. And so while it comes in just above £100,000 at list price, you sense that Stuttgart is pitching the car as a more ‘reasonably priced’ alternative to a £150,000 Aston Martin or Bentley — and fairly convincingly so.

In addition to its standard equipment, our test car had 20in alloy wheels, a head-up display, a Burmester ‘high-end’ audio upgrade and Mercedes’ active hydraulic Magic Body Control suspension, the latter endowing the car with both ‘curve tilting’ active cornering and active ride functions. 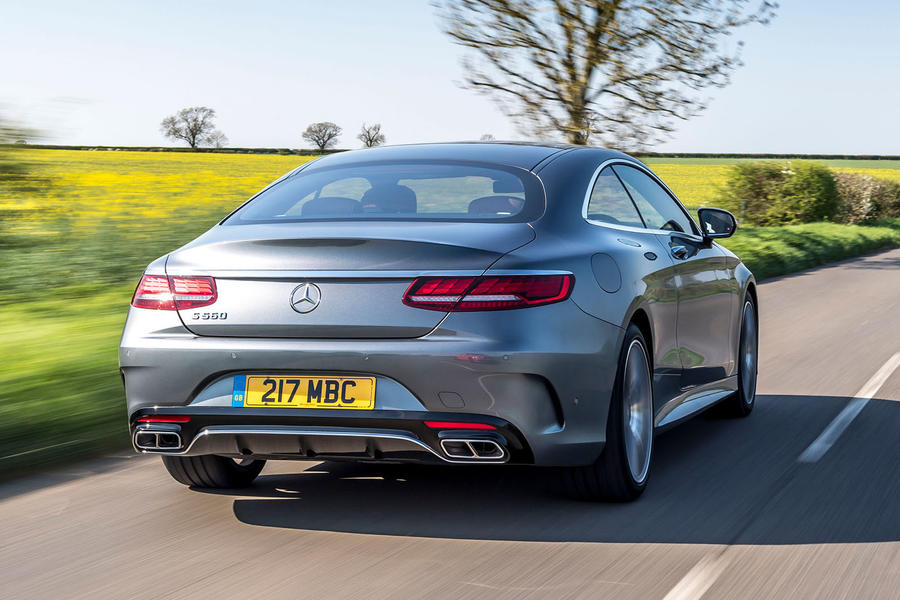 As a luxury product both to admire and to spend time in, the S560 Coupé certainly seems to hit an appealing spot; at least it does in this tester’s estimation. I’ve often been told that I don’t think like a well-heeled customer when reviewing cars like this. Short of taking an automatic weapon into my next pay review, I suspect that can’t be helped.

The car’s cabin is at once inviting, plush and exotic. While there are bits of brightwork inside it that feel like metal (door pulls, speaker grilles, heater controls) and other bits that clearly don’t (steering wheel trim, infotainment buttons), overall the interior wants for very little lavishness or opulent tactile feel. There’s a matching elegance and luxury-level presence about the S560’s outward appearance, too.

And, contrary to what you might expect, that new V8 engine can feel like the heart and soul of refinement when you want it to; it can even run in variable displacement mode, on just four cylinders, to save fuel. Quiet at idle and smooth under power, the engine is suavely managed by the car’s nine-speed torque converter automatic gearbox when you’re driving the car in Comfort mode.

It’s a typically responsive engine, too, with enough accessible mid-range torque to make the S560 capable of pouring on pace without seeming to work for it. In Sport mode, while you’d say the car clearly isn’t in the ‘super GT’ big league for outright pace, it can hold it own — and then some. And it sounds like an authentic, woofling V8 AMG performance machine while doing so.

The car’s overarching smoothness, its comfortable, well-sealed cabin and the isolated feel of its controls combine with Mercedes’ full suite of active driver aids to make long-distance driving feel like something of a privilege.

Even in appalling test conditions of monsoon-like rain, the S560’s optional Distronic Plus active cruise control and active lane-keeping assist systems worked flawlessly at UK motorway speeds. Unlike so many similar systems, they’re not flummoxed by spray, dazzle or waterlogged sensors, providing reassurance just when it’s most needed.

The S560’s ride prsents a couple of relatively minor disappointments. There's a little more road noise and surface patter that filter into the cabin than you’d ideally like — and enough, certainly, to be a good advert for the car’s standard-fit 19in rims (our test car was on optional 20in wheels). But it deals very well with the majority of UK road surfaces by cleverly cradling the car’s mass and very effectively rounding off the edges from the vast majority of bumps and ridges you might come across on your evening commute.

Even though the car’s chassis rates are always adjusting to be ready for intrusions they’re about to encounter, they do it imperceptibly — and so there’s a clearer sense of honesty and predictability about the relationship between the road and the car’s sprung and unsprung masses than you'd get with air suspension. Better shock absorption, too, and better on-centre steering feel.

And yet certain short, sharp ridges still seem to catch the car’s suspension unawares — the car being much better at ironing flat a set of low-frequency, low-amplitude undulations. Mercedes’ latest and greatest suspension system clearly can’t be ready for absolutely everything. The S560’s ‘curve tilting’ function is handled like an extra setting on the car’s drive mode toggle switch and, you sense, would be at its best on those long, sweeping bends of European dual carriageways taken at continent-crossing speeds.

You get a flavour of what it does well on some UK motorway sliproads, because it inclines the car gently into each bend as you turn in, preventing lateral cornering loads from acting on the cabin occupants with notable success. But try to use it on a typical British A-road and you’ll find it slow to react at times, and that tends to rob the S560 of initial steering weight, making each turn of the wheel feel oddly vague; a bit like pushing at a door that’s come loose at the hinges.

Thankfully, steering weight is much better when you simply turn the system off. 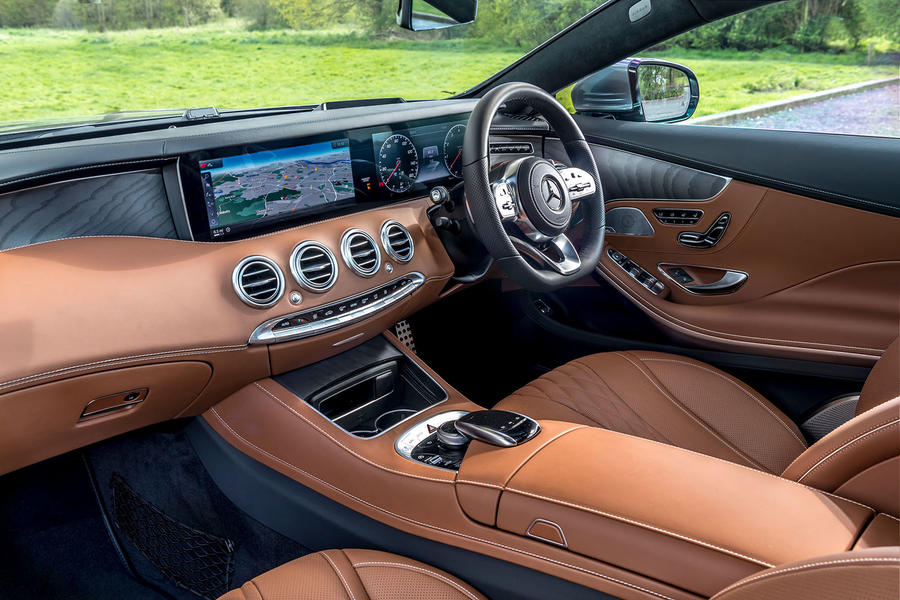 Depends, I guess, if you’re the sort of person who buys a fairly irrational car for a rational reason; because it’s all the grand touring coupé you really need. As such, I’d say the S560 Coupé makes a fine case for itself — and, as a car to use every day, I’d take one over plenty of more rarefied ‘super GTs’.

But, equally, I could see why driving one — even looking at one parked on your gravel driveway — wouldn’t fill you with quite the same glow you might get from an Aston Martin, Bentley or Maserati.

When BMW’s new 8 Series comes along later this year, it should provide a fairer basis on which to judge this car. But, even then, I’d expect the S560 Coupé to bring a level of maturity, refinement, level-headedness and convenience to the fore that continues to set it apart. 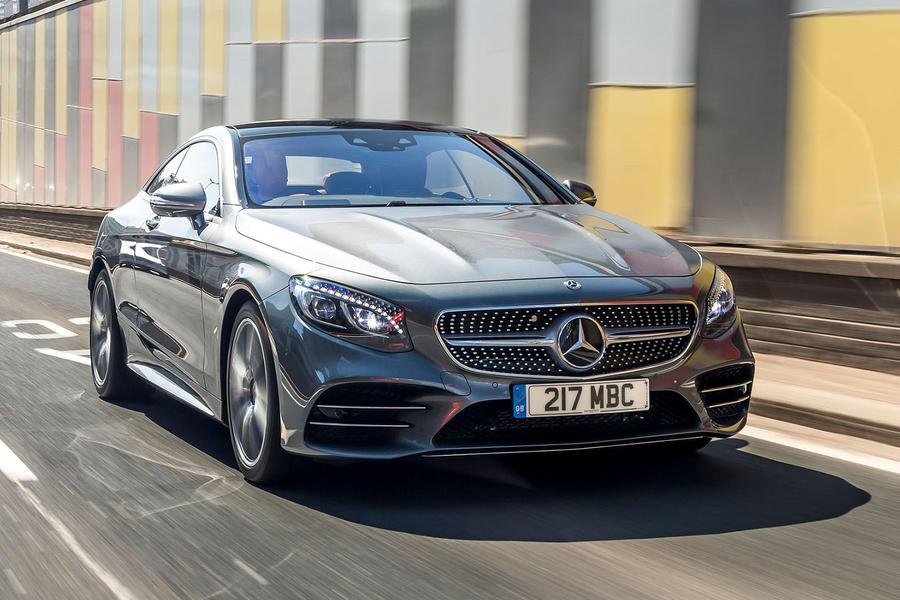 Doesn't look great, too fussy in the way that most cars are these days.  I'm certain it will be excellent in both quality and capability but personally I'd far rather have a W126 560 SEC.  Or a 560 SEL, 500 SE or whatever.  I'd be forever glancing out the window to see it on my drive, which sure as hell wouldn't be the case with the new car.  As I commented on another page recently, modern cars are making old cars look better and better.

Why not use the '53' powertrain instead?

Meant to say anything less than a 6 cylinder engine! Why no edit facility Autocar? And why does your page keep developing errors recently, regardless of which internet browser I use?

Another overpriced tacky and tasteless Mercedes

The interior really is awful, being made of cheap materials while also looking tacky and chintzy. Classy, attractive and expensive looking and feeling it is not! And with the simply stunning looking and sublime quality interior of the new Bentley Continental GT, the S Class Coupe's really does look second best by miles and is a disgrace, especially at £100k, but then all Mercedes have an interior that falls well short of the standards set by their inflated price tags. Even the exterior styling of this S Class Coupe looks bling and tasteless, even more so compared to the Bentley. One day the Mercedes S Class family will catch up and be deserving of their price tag.