This is end-of-series, limited-run, valedictory version of the F80-generation BMW M3.

It’s a saloon, of course (I’m still not used to that), but, like last year’s M4 CS coupé, the M3 CS gets a dusting of the lightweight panels and aerodynamic features from the M4 GTS of 2016. There's a fairly low-impact suspension update too, as well as a new set of lightweight forged alloy wheels, 'cup' tyres and an extra helping of power and torque.

The CS isn’t cheap, weighing in at fully £23k more even than the M3 Competition Pack – within five grand, even, of the mighty 591bhp BMW M5. But BMW is clearly hoping that there will be enough lingering sentiment for the departing M3 to justify that kind of premium, and it has limited global volume to just 1200 units to try to reassure customers that it’s a savvy-enough buy.

All 1200 of those cars have already been built, by the way, so if you want to bid a particularly expensive, fond farewell to this particular M car, you should move fast. But if you’re not so bothered about how many doors you’re getting, the 4 Series and BMW M4 will remain in production for a while yet. 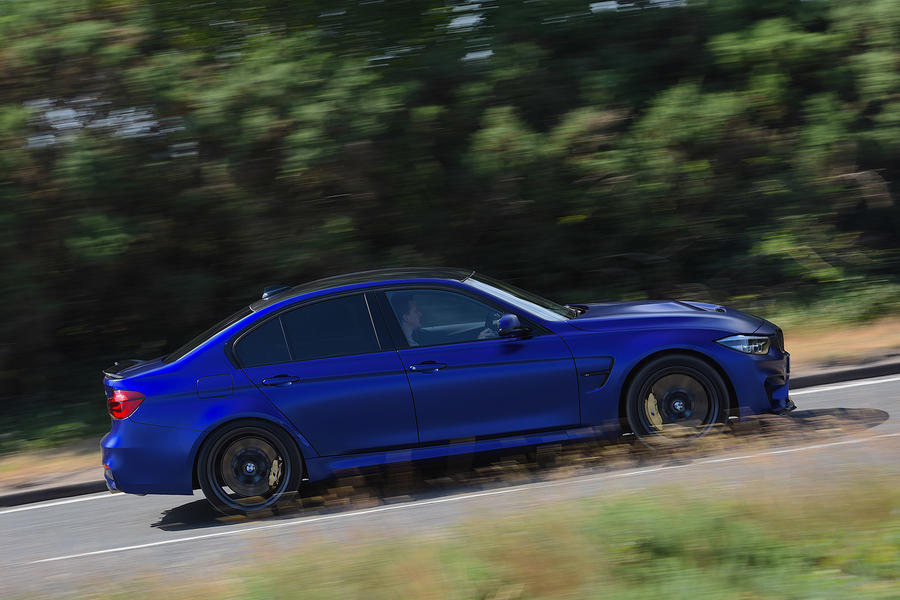 Like a swotty schoolkid playing up for the teacher’s approval, BMW has studiously addressed almost BMW every dynamic criticism that has been widely levelled at the F80 M3 with this car. It should therefore be harder to conclude that it isn’t an outstanding, class-leading sports saloon in this, its ultimate iteration.

And yet I’m going to. Because, despite the improvements the CS demonstrates in terms of tactile feedback, outright grip, mid-range thrust and all-round driver engagement, I still don’t think we’ll look back at this as the greatest version of a car that represents the M3 at its dominant best. It’s certainly better, mind you, than the M3 was when it first appeared in 2014 – by quite a distance – and the Competition Pack revision that came along two years later.

Our main complaint about the standard F80 was that it just wasn’t that effusive: not engaging enough to drive at everyday speeds, not immersive enough through its controls, not quite progressive enough on the limit, and certainly not in possession of the sort of engine that takes your imagination hostage quite like the Ferrari-derived V6 of the Alfa Giulia Quadrifoglio or turbocharged V8 in the Mercedes-AMG C63.

The CS’s rolling chassis, however, makes a big difference to points one and two. The car has received fairly minor spring and damper alterations and software recalibrations for its power steering and e-diff, but I’d say at least half of the extra contact patch feel and loading variation you can detect through the steering wheel is down to those forged rims and Michelin PS Cup 2 tyres. There’s plenty of both now, although the tactility of the steering ebbs and flows with a strange inconsistency, even when you stick to one driving mode.

BMW claims the adoption of a slightly smaller front wheel than the M3 Competition Pack is to the improvement of steering and handling response. And while I agree to a certain extent, I still wouldn’t say the car is quite at the races in terms of the eagerness with which it changes direction.

There’s just a hint of laziness about its initial steering response and a need to get a fair amount of steering angle dialled into the rack before the front axle will really bite around corners, junctions and roundabouts. A few years ago, before the arrival of the rapier-steering Giulia, I might not have noticed it; and with high-speed autobahn stability in mind, I can easily understand why it’s present. But it certainly takes the edge off your perception of the outright agility of the car.

It’s also the introductory trait of an overarching dynamic character with which I find it a touch harder to gel than that of its rivals. It’s not at all hard to sum up how the Giulia feels at its best (scalpel-blade sharp), likewise the C63 S (hot-rod drift machine). But the CS doesn’t define itself in such clear terms. Particularly in this latest form, it’s every bit as taut in its body control and as adhesive as the Giulia, and even more precise and secure in some ways. And yet you can’t drive it quite as instinctively as the Giulia, or with the abandon of the Mercedes.

The CS asks you to invest more deeply but fails to reward you as vividly. It’s more serious and businesslike than the Giulia about the catering for the necessities of going fast, but it's less poised and playful.

BMW’s turbocharged straight-six, meanwhile, sounds better in the CS than it has in any F80 M3 so far, with more real engine noise eddying its way out from underneath that CFRP bonnet than in other versions and a bit less annoying digital synthesis of the same in evidence. But you still have to roll the window down to hear much in the way of genuine induction noise.

Moreover, you’ll have to prefer the character of a motor that revs freely to 7000rpm, and that needs to be worked to feel really potent, to one with a knockout wallop of mid-range torque and the gargle of a V8 if you're to really appreciate this car. Despite the extra 37lb ft of torque on offer and the fact that it’s a sub-4.0sec 0-62mph prospect on paper, the CS still doesn’t feel that quick. 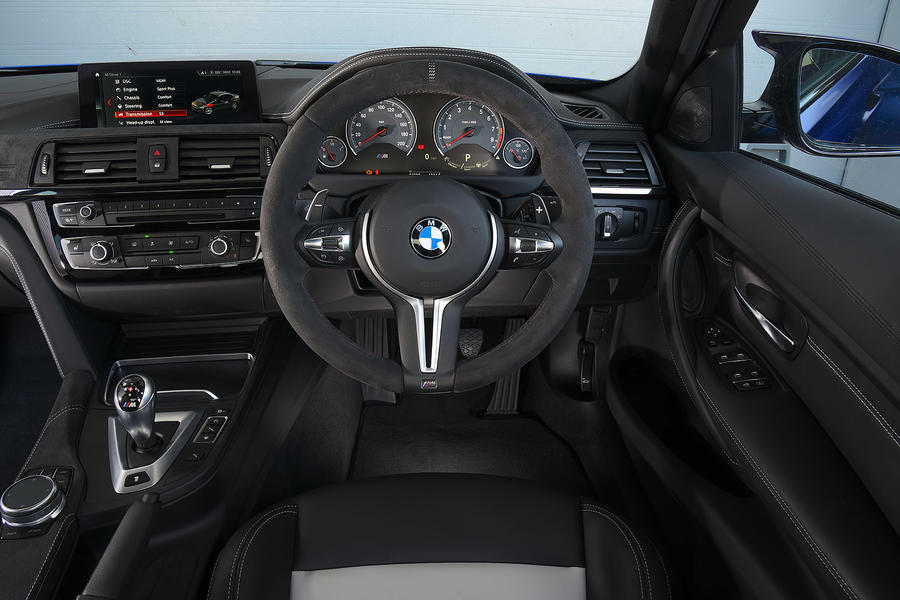 An asking price as close to £90,000 as this would make the CS hard to justify BMW even if you already have a M3, love it and want to go one better before the F80 story ends. I reckon the CS’s wheels and tyres alone would get a Competition Pack car to within touching distance of the same dynamic standards, and I dare say they wouldn’t cost you twenty-something grand.

And if I had £90k to spend and it was a choice of this or the new BMW M5? It’s not even a contest. You might have already read otherwise on this website, but for me, big brother’s extra pace, incisiveness and breadth of ability have the question entirely sewn up.

It’s a great shame but, while both are very credible performance cars, both the F80 M3 and F82 M4 will depart without ever having looked like dominating their premium-branded rivals with anything like the dynamic brilliance of some of their predecessors.

We’ll have a hiatus now as M Division gets to work on the new G20-generation 3 Series and the related 4 Series, seeking once again to hit the heights of the V8-powered E92 or the memorably poised E46. The main problem they’ve got? Their own track record - and the fact that, where the M3’s concerned, nothing but the very best driving experience in the segment will be considered a success. 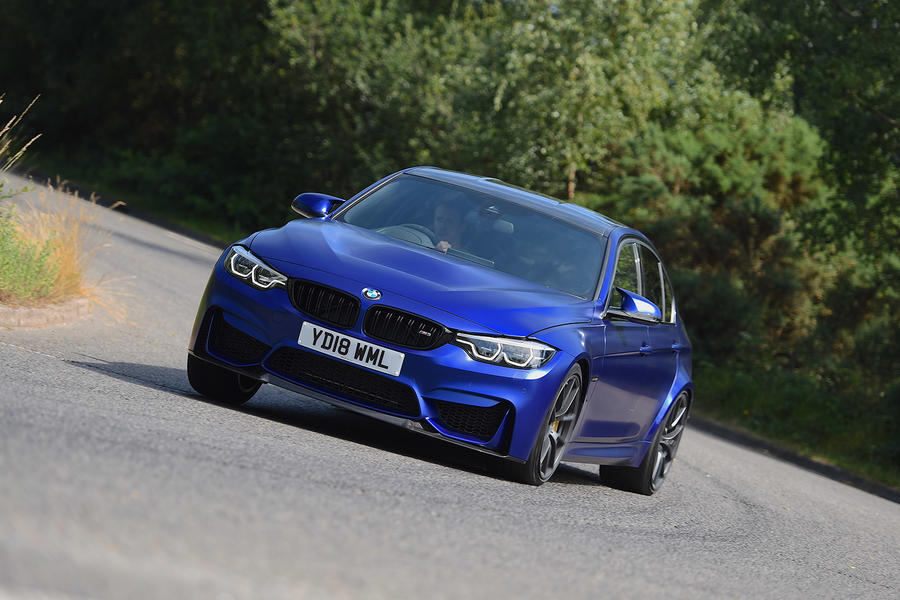 ... but I have to say I think it looks superb as far as mid size sedans go. It's like a hot rod for those of us who lack the skills and equipment required to do it ourselves. I'd drive this for sure, if I could afford it.
Symanski 5 July 2018

Did they fix the engine?

I used to own a BMW.   But it spent more time in the garage than all my previous cars put together!   Then you discover that BMW are still fixing design faults and unreliable parts in their cars for free in other parts of the world, but just not in the UK.   You've paid more for the car, and now you're having to pay thousands more to fix their problems.   Doesn't seem right, does it?

Never again will I buy a BMW.

Get Help With Professional Essay Writer

Despite a 10bhp power hike and a loss of 10kgs from its kerb weight, you’re probably not going to notice a surge of additional performance in a straight line, but it still feels strong while the additional torque does make itself felt when punching out of corners. It also feels slightly more eager right at the top of the rev range. You can get in touch with British Custom Essay and contact us to Write My Essay flawlessly.