From £22,0608
Big improvements in practicality and refinement serve BMW’s bottom-rung model well on UK roads, and the loss of a driven rear axle is nothing to mourn.
Open gallery
Close

The third-generation BMW 1-Series hatchback, which has now landed in the UK. And, while it may not be a widely held opinion of any new BMW right now, I’d say that it looks, more or less, like it ought to.

Because it looks nothing at all like a traditional three-box saloon of the 1980s, of course, some will call this car inauthentic – but I’d bet that few of the younger customers at whom BMW is aiming this car will be among them. For your average 2019 thirty-something car-buyer, after all, a typical modern BMW is an BMW X1, an BMW X3 or perhaps a 2-Series Active Tourer – those being the modern BMWs we now see the most of.

If that typical buyer is familiar with an ‘E34’ 5-Series saloon at all, meanwhile, he’ll probably know no part or facet of it more intimately than his memory can conjure of the patterned cloth on the front seatback. Times, they are a changing – and it’s the job of this car, perhaps more than any other, to change BMW’s customer base.

Were you to point out that the styling robs the 1-Series of some of the old models’ distinctiveness, of course, I wouldn’t argue. But wasn’t that inevitable? The ‘F40’-generation car looks a bit Lexusey from the rear, as the 3-Series does – while the adoption of plenty of wedgy, creasy attitude into the frontal aspect and profile doesn’t set it apart from hatchback rivals quite as clearly as intended. Nevertheless, it’s smart enough and doesn’t offend – not, at least, to my eyes.

The new 1-Series lineup includes diesel engines ranging from 114bhp 116d to 188bhp 120d xDrive, while the petrols take in the range-topping M135i xDrive (on which a group test is in the pipeline) and this 138bhp 118i. Prices start just below £25,000, and the trim level walk is a familiar progression from SE, through Sport, up to M Sport – with the usual bundled options packages to beef up your equipment level.

For suspension SE- and Sport-spec cars gets standard coil springs; M Sports get lowered, stiffened passive suspension; and adaptive dampers are optional – although can’t be combined with the very biggest 19in alloys of the range or with BMW’s M Sport Plus package (which gets you uprated brakes and a variable-ratio M Sport steering setup).

Our test car has the passive M Sport springs, optional 19in wheels, conventional non-runflat tyres, as well as the car’s standard six-speed manual gearbox. The automatic option is either a seven-speed twin-clutcher or an eight-speed torque converter depending on engine choice (the latter is standard-fit with 120d- and M135i xDrive models). 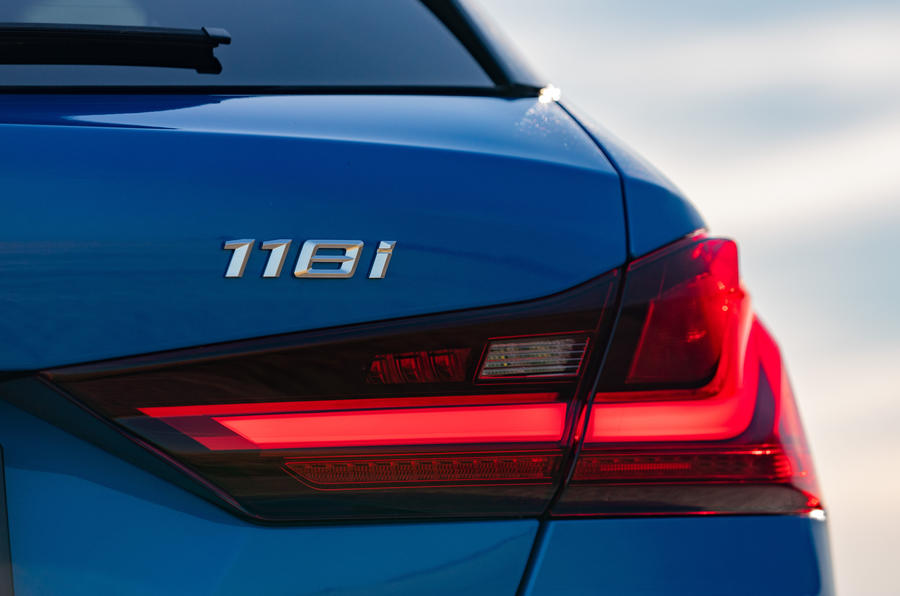 Moving onto the same model platform as the Mini Clubman and most of BMW’s other compact models, the new 1-Series is slightly shorter than the last – but, because it’s wider too and also because you sit higher up within it, doesn’t feel any smaller. The car is, unsurprisingly, almost exactly as wide as the aforementioned Mini with all-but-identical track widths both to those of the Mini and the BMW X1.

It’s undoubtedly a more spacious and usable car than its forebear, with very respectable amounts of room in the second-row and boot – not least, you suspect, because of the less recumbent layout of the whole car. Perceived cabin quality has taken less of a transformative leap, though; you’ll find harder, wobblier trims as well as pudgy, pleasant ones without searching for long, and so the car’s aura of expensive material solidity isn’t quite as convincing as it might be.

The car’s onboard technology showing isn’t lacking. You get an 8.8in touchscreen infotainment system as standard even on entry-level cars, along with a partly digital instrument setup – and can upgrade to a bigger central display and BMW’s fully digital Live Cockpit Professional instruments, a Harman Kardon premium audio system and better connected services for a not-unreasonable £1500. Less reasonable is the fact that you still don’t get Apple CarPlay smartphone connectivity as standard, but rather as part of BMW’s Connected Drive subscription. Not good enough, BMW. I liked the crisp, responsive infotainment setup particularly since it retains BMW’s rotary iDrive controller; but I liked the digital instruments less, which still seem to me to prioritise style over legibility and don’t offer enough adaptability in their layout.

Out on the road, even in M Sport trim, on optional 19in wheels and with BMW M Sport Plus package equipped, the 1-Series behaves in a more refined and well-rounded way than the old 1-Series ever did. BMW’s three-pot petrol engine is pretty quiet and smooth, and has a responsive power delivery and a broad spread of torque, so you can adopt a fairly brisk stride easily enough. It’s not the sort of three-pot you feel inclined to rev beyond 5000rpm, but it’ll oblige when it needs to. Despite the slightly discouragingly long gear ratios of the car’s six-speed manual gearbox, however, it’s not the sort of three-pot to return particularly impressive real-world fuel economy – the car indicating just shy of 40mpg on our mixed test route. Used more intensively on motorways and cruising more consistently, that return might improve a little.

The car’s ride is firm but fairly settled and well isolated considering its sportier tuning, except over the very sharpest ridges which are dealt with slightly brusquely. Body control is good and handling precise and purposeful, without feeling particularly agile or desperately engaging.

If you expected BMW’s chassis engineers to respond to the technical shift that this car has been through by making it the best-handling car in its class in spite of it all, you’re in for minor disappointment, then. There’s more measure and pragmatism in the new 1-Series’ dynamic makeup than that assumption would imply. It doesn’t dart into corners but rather turns smartly yet progressively, almost as if, after this car’s recent history, Munich had decided that it was a mistake to attempt to make a premium hatchback really ‘fun to drive’.

There’s certainly enough steering feedback on offer to keep you interested in what’s going on under-wheel, however, while the car’s high grip levels and its impressive handling accuracy and damper control all combine to make it as easy to hurry along quickly as some might assume that a typical BMW driver would want it to be. 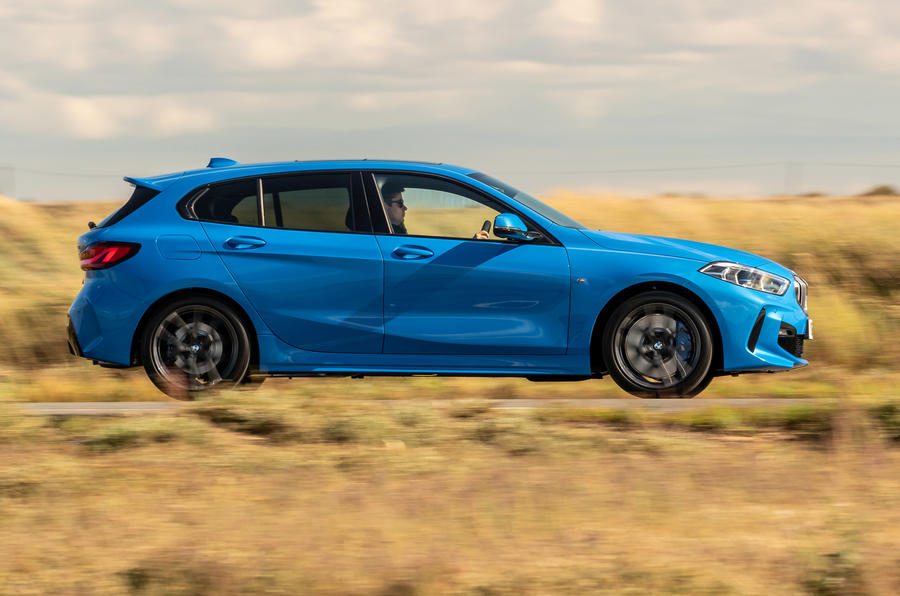 The new 1-Series would beat most family hatchbacks for driver appeal, then, albeit perhaps not all of them – and some of them not by much.

It’s certainly a better modern hatchback for being a more conventional, front-wheel drive one; especially since, in reality, a driven rear axle never did many dynamic favours for its predecessors anyway. And if you’re surprised that I left out such an apparently important technical fact until the final par, don’t be; this was the car that BMW compromised in myriad ways to make it ‘standard drive’, only to discover years later through market research that the vast majority of 1-Series owners neither knew nor cared that they’d bothered.

Playing by the class’ technical rulebook has undoubtedly given BMW’s Mercedes-Benz A-Class-chasing hatchback a better chance of winning some ground back in its eternal struggle with its old Teutonic rivals – and while it hasn’t made the new 1-Series a dynamic world-beater, it hasn’t made it boring to drive either. 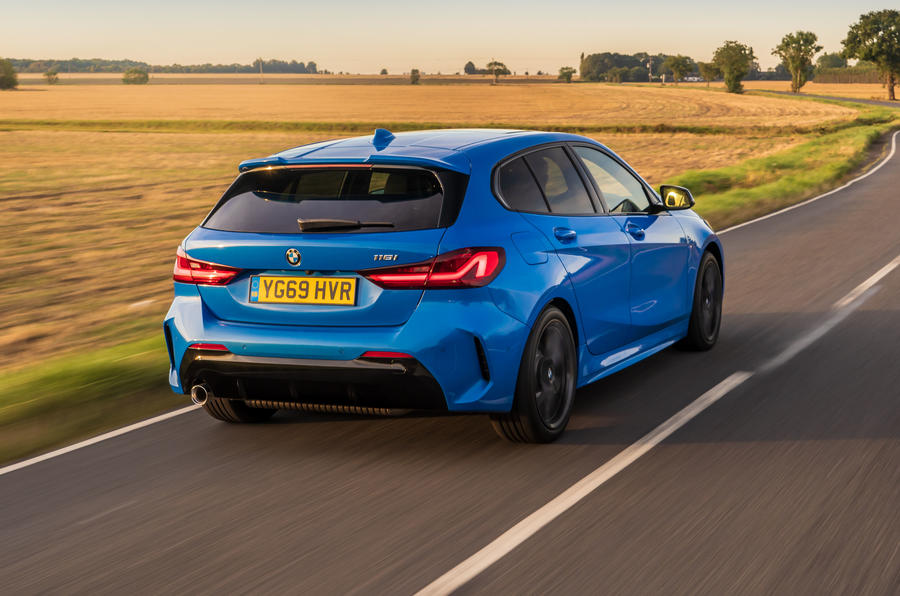 So it's a FWD petrol BMW with a turbo that doesn't seem to want to rev past 5,000 rpm! :banghead:

Just another piece of mediocraty IMO.

Coming from a X2, we want soemthing a bit smaller but premium still.

I liked the A class interior when it came out last year and loved the extra wide dispaly but BMW have surpassed it and is now on par with the Audi.

Driving there aren't much different. IMHO.

probaly go for the BMW if my wife agress :)

I seem to be the exception but I've just ordered one!

I know I will be lynched for this statement(!), but having had 2 rear drive cars in the past, I would never buy another. OK, they might perform marginally better at the limit, they might provide a bit more fun for the boy racers of this world, but on the average road, in average traffic, you can't really tell the difference.  Not to mention the number of Beemer drivers I've waived to over the years as I've happily driven past them while they were stuck in snow.

So it was music to my ears when I realised that the new 1 Series was FWD.  I'd never even considered a BMW before. We were seriously impressed when we test drove it for a few hours. It's a second car so we don't need masses of power but the 3 pot 1.5 petrol engine is suprisingly nippy yet still quiet and refined on the open road.  The slightly stiffer M Sport suspension combines well with it.   We took it out on some country B roads and it was a fun drive.  In terms of comfort and sophistication we thought it was in a much higher league than the Focus or Golf and it definitely seemed quieter than the A3.  And the interior is jsut a nice place to be - we just couldn't live with the bling of the Merc A class interior.

Is it perfect, no definitely not.  I too have a few issues with the size and shape of the front grill, and the digital cockpit is not as good as the competition. A slightly bigger 4 cylinder petrol engine would have been good (no doubt it will be announced the day after we take delivery!) and why does Apple Car Play have to be an added cost subscription when other manufacturers include it?

But overall we were seriously impressed with the car and look forward to taking delivery next month.