BACK TO ALL NEWS
Currently reading: Top 2019 BMW 1 Series model to be 300bhp M130iX M Performance
UP NEXT
Buy them before we do: second hand picks for 15 October

BMW’s front-wheel drive revolution is set to kick into high gear in 2019 with the launch of the third-generation 1 Series, although the flagship M130iX M Performance model will be four-wheel drive.

The next 1 Series is described by a high-ranking official as a distinct turning point for the German car maker, which last year surrendered the global luxury car sales lead to its key rival, Mercedes-Benz, for the second consecutive year.

The M130iX hot hatch will be a crucial part of the overhaul to front-wheel drive as BMW tries to prove that it can offer a credible front-driven performance model alongside its traditionally successful rear-wheel-drive M cars.

Currently in the early stages of development, the BMW M division’s future competitor to the Volkswagen Golf R, Audi S3 and upcoming Mercedes-AMG A35 is scheduled for launch in 2020. It will feature specially tuned version of BMW’s turbocharged 2.0-litre four-cylinder petrol engine, developing around 300bhp, together with a multi-plate-clutch xDrive four-wheel-drive system.

BMW controversially halted a long tradition of rear-drive and four-wheel-drive models with the introduction of the 2 Series Active Tourer in 2014 and the subsequent launch of the larger 2 Series Gran Tourer in 2015. The car maker now plans to bolster its front-wheel drive line-up with the new 1 Series, which forgoes the longitudinal engine mounting of today’s second-generation model for a space-saving transversely mounted engine. 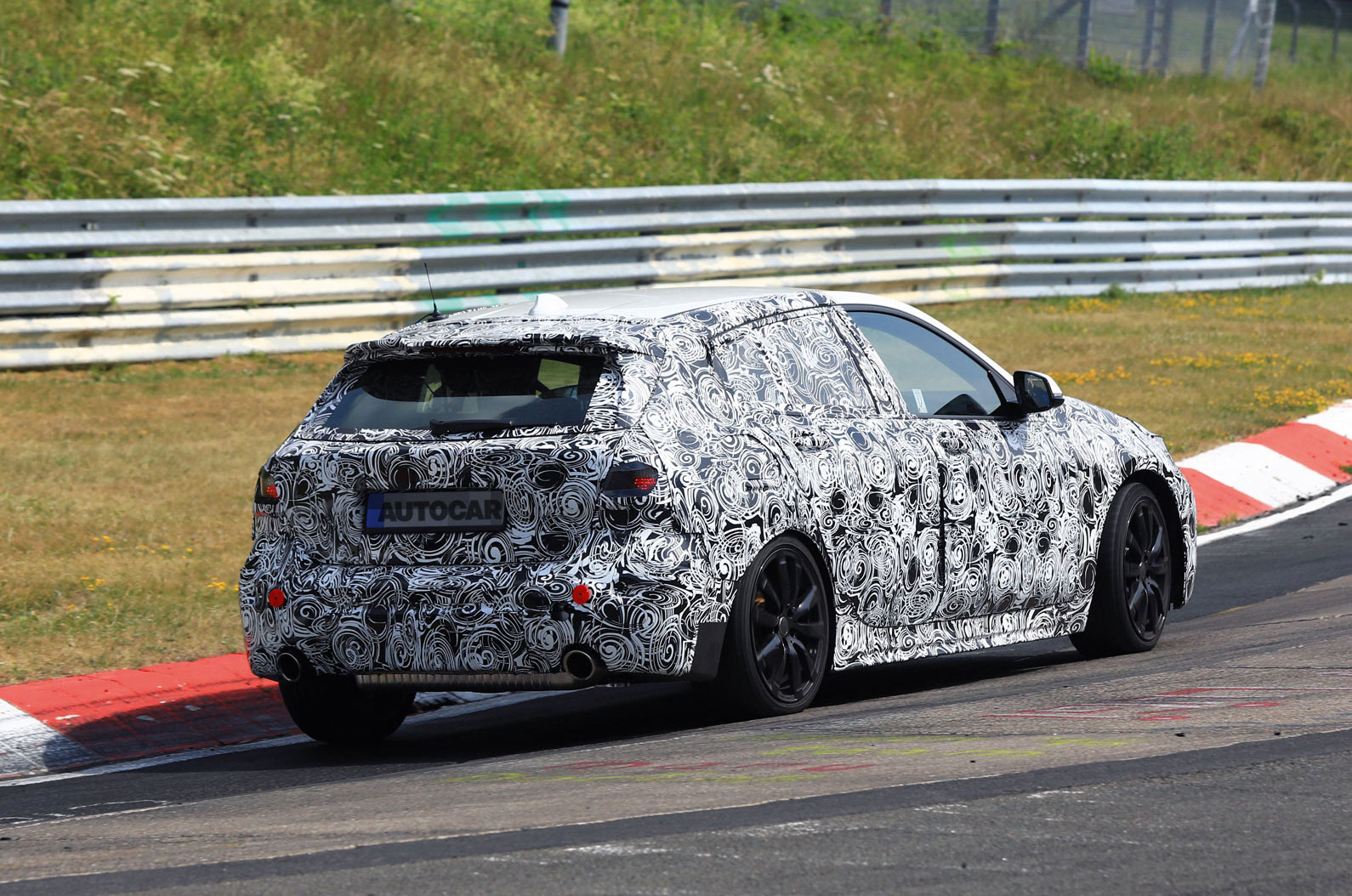 The move is set to provide the new 1 Series with a lower kerb weight and improved packaging, together with simplified production processes and greater profitability than its rear-wheel-drive predecessor.

Nothing is official just yet, although BMW production experts suggest the new model will offer savings of up to €750 (about £660) compared with its more complex predecessor.

With 91,802 sales in the first half of 2017, the 1 Series is among BMW’s best-selling ranges worldwide. It also attracts the youngest buyers of all BMW models, making it a particularly important model for the future development of the brand.

BMW: six new front-wheel-drive models to look out for

The new rival to the Audi A3 is the first model to be based on BMW’s front-wheel-drive FAAR (Frontantriebsarchitektur) platform. According to BMW’s head of development, Klaus Fröhlich, this structure is a progression of the UKL platform that underpins the 2 Series Active Tourer and 2 Series Gran Tourer, as well as the existing Mini line-up, but with added modularity and the flexibility to support full-electric drivetrain and battery combinations.

It won’t be the first front-wheel-drive 1 Series model, though. That distinction goes to the 1 Series saloon (pictured below), which is based on the existing UKL platform and produced in a joint venture between BMW and Brilliance at a factory in Shenyang, China. Although it was initially considered for sale in export markets as a rival to the likes of the A3 saloon and upcoming Mercedes A-Class saloon, it will not form part of the third-generation line-up in European markets, according to BMW. 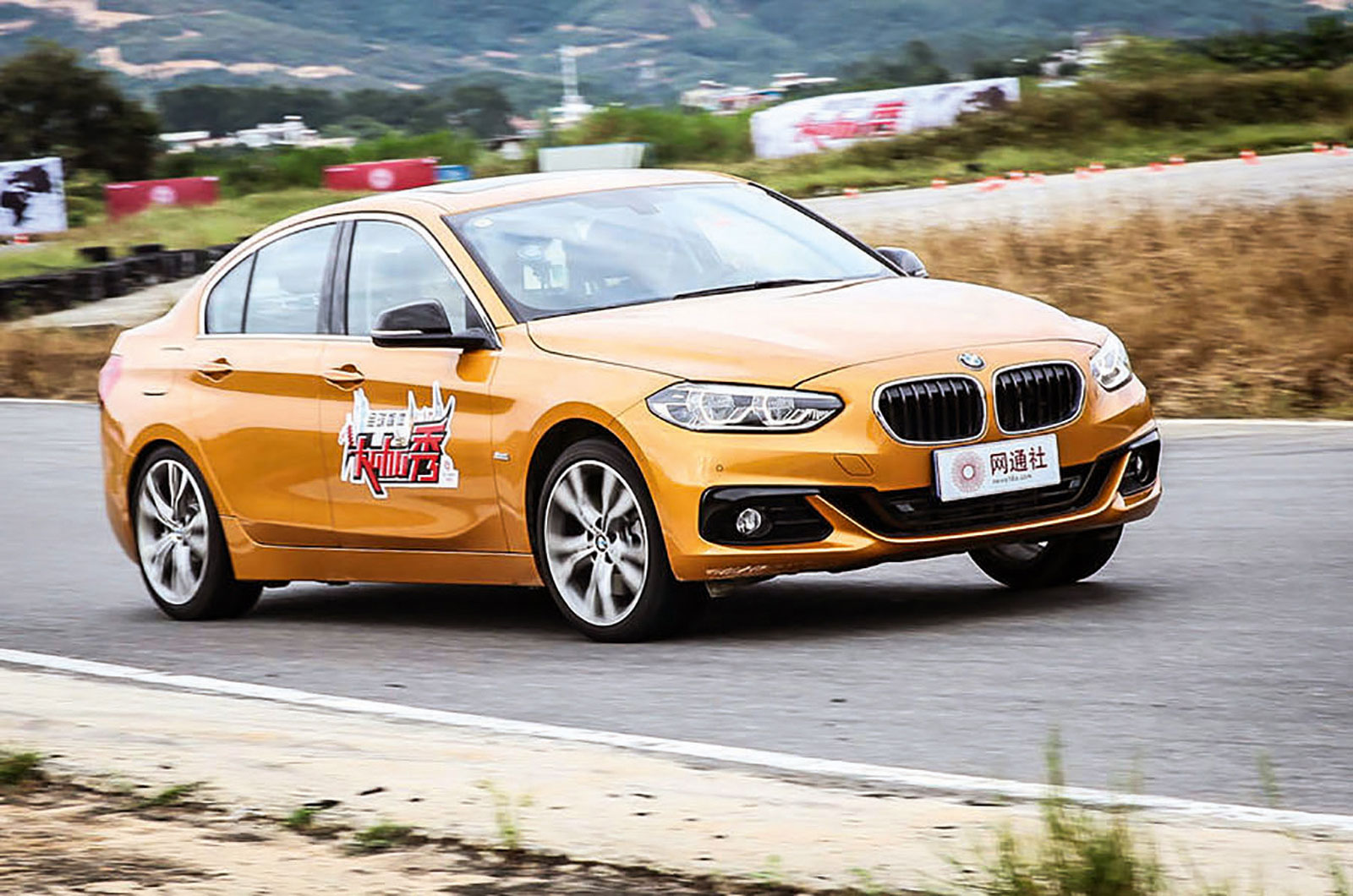 Instead, BMW is lining up a new front-wheel-drive four-door sister model to the new three-door and five-door 1 Series hatchback models that is likely to be called 2 Series Gran Turismo.

Set for a launch in 2020, it is aimed at a niche currently occupied by the Mercedes-Benz CLA with what is described as a “more expressive design” than the existing 1 Series.

Despite the switch to BMW’s latest front-wheel-drive platform, the exterior styling of the new 1 Series is set to retain the cab-back influences that have distinguished it from rivals since its addition to the BMW line-up in 2004.

“It is a hugely successful model for us, so there’s no need to change the basic direction of the design,” a high-ranking BMW official privy to the appearance of the production version told Autocar. “There will be some adjustment in proportions due to the new platform, but it will continue to be instantly recognisable as a 1 Series.” 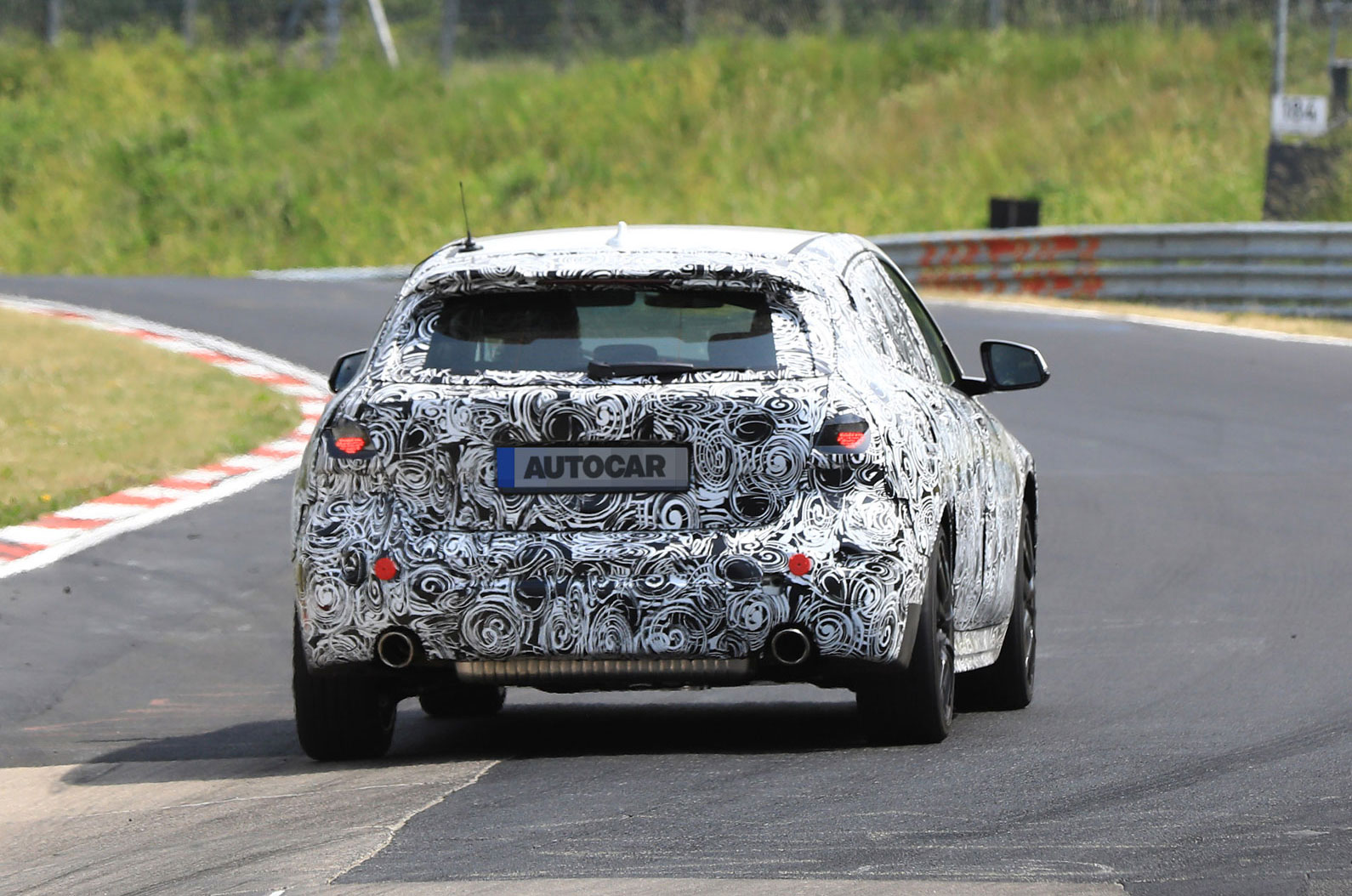 These comments are backed by the latest prototypes of the new 1 Series, which reveal the model’s cab-back silhouette.

As with all future BMW models, the new hatchback is set to feature its own uniquely shaped grille and headlights in a move aimed at providing greater visual differentiation between the German car maker’s individual model lines. Increases in both the wheelbase and tracks will cause the new 1 Series to grow marginally in size.

It is inside where BMW’s decision to place the 1 Series on its new FAAR platform will show the biggest changes. The transverse engine-mounting and less intrusion from the transmission tunnel are set to combine with the car’s longer wheelbase and extra width to provide the new model with significantly more interior space and greater flexibility than today’s 1 Series.

Prototypes of the new 1 Series, which has the internal codename F40, reveal that BMW has used the added dimensions to increase the area of the door apertures, hinting at improved entry and exit to the cabin. A longer rear overhang is also set to provide the 2019 model with greater luggage capacity than the 360 litres on offer today.

The new 1 Series hatchback and its 2 Series Gran Turismo stablemate will be powered by updated versions of today’s turbocharged 1.5-litre three-cylinder and turbocharged 2.0-litre four-cylinder petrol engines. The more powerful versions are planned to adopt a particulate filter in an attempt to reduce CO2 emissions to a model-line-specific average of less than 120g/km, according to BMW engineering sources.

Also, from the outset of sales, there will be revised 1.5-litre three-cylinder and 2.0-litre diesel engines – the most powerful of which is set to offer up to 240bhp. The hot M130iX M Performance will follow in 2020. 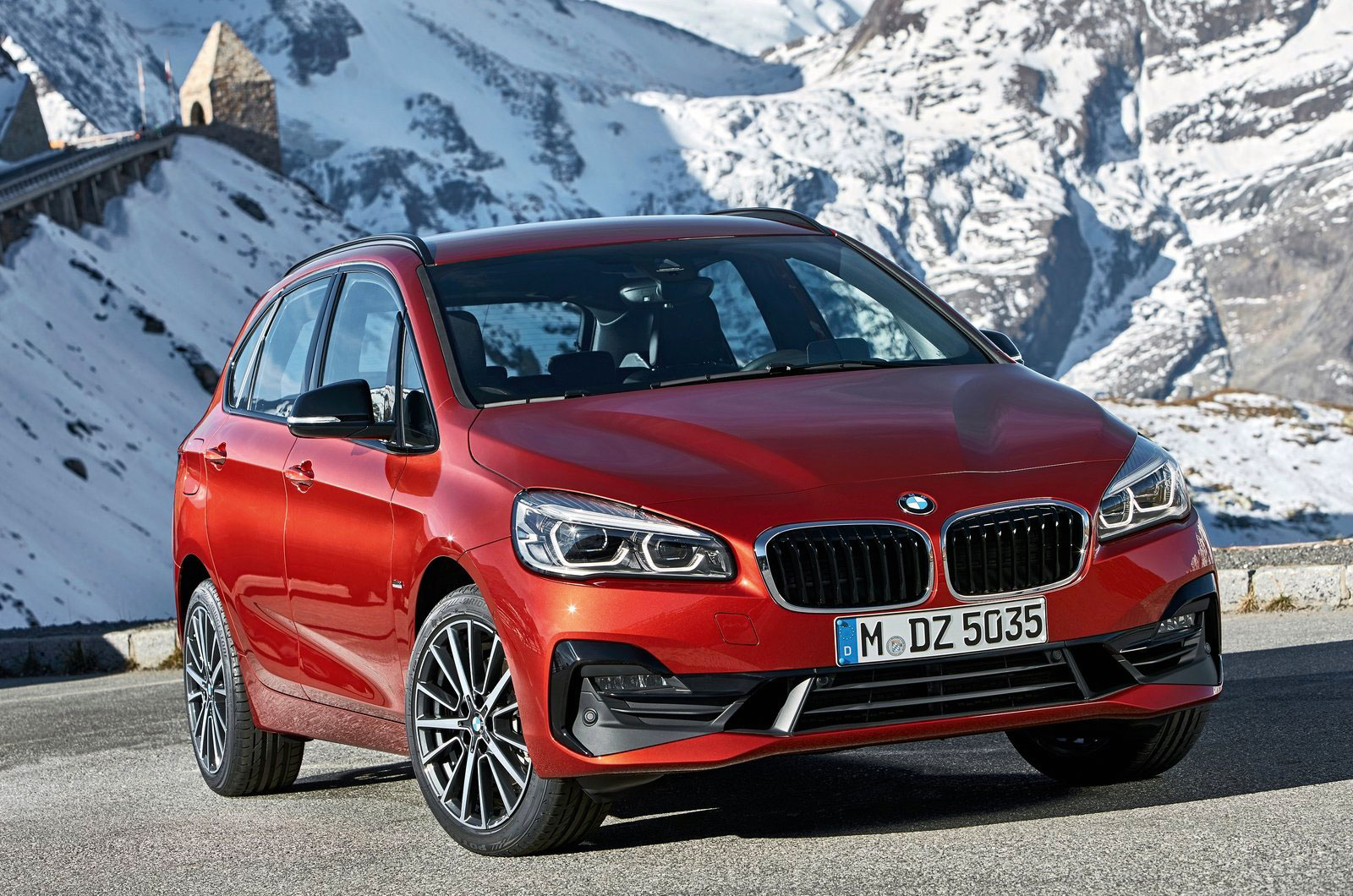 With doubts hanging over the future of diesel sales in many key European markets, BMW has future-proofed the new 1 Series by providing it with at least one mild-hybrid drivetrain in the form of a turbocharged 2.0-litre four-cylinder petrol engine fitted with an integrated starter motor and 48V electric system. Similar to the system Mercedes plans to bring to the new A-Class, it is claimed to provide fuel savings of up to 20% compared with today’s turbocharged 2.0-litre four-cylinder 125i.

As part of further plans to meet the 95g/km emission regulations set for introduction by the European Union in 2020, BMW is also readying a petrol-electric plug-in hybrid variant of its new entry-level hatchback.

Set to rival the A3 e-tron and an upcoming electrified version of the fourth-generation A-Class, it is planned to run a similar set-up to today’s 225eX Active Tourer (pictured above), with a turbocharged 1.5-litre three-cylinder petrol engine combined with an electric motor and a lithium-ion battery pack.

BMW M F80 to be axed due to new emissions test

Details remain scarce, although Fröhlich recently hinted that future BMW hybrids will be developed to achieve a pure-electric range of more than 31 miles (50km). That suggests the new model could feature the same high-density battery cells used by the facelifted i3 for greater range than the 225eX Active Tourer, which achieves a claimed 25 miles.

To appease customers seeking traditional rear-wheel-drive dynamics, BMW has revealed to Autocar that it plans to base the second-generation 2 Series Coupé and 2 Series Cabriolet, due out in 2020 and 2021 respectively, on an updated version of its CLAR platform, meaning they will retain the standard rear-wheel drive and optional four-wheel drive of today’s models.

As a consequence, the follow-up model to the existing M2 (itself to be updated in 2018 with the introduction of a new limited-volume Competition model packing the turbocharged 3.0-litre inline six-cylinder engine from the M3 and M4, with a claimed 400bhp) will also continue with a rear-wheel drive layout.

This is getting ridigulous. Why there are two M's in the model name, isn't one enough? Also, why the "performance"? One letter M should be enough to indicate that this is a performance oriented model.

The model name is (presumably

The model name is (presumably) "M130i xDrive", nothing else.

It is an M Performance vehicle (like X3 M40i, etc.) but that is not part of the model name.

Just like the new Mercedes A-class, BMW have chosen the disguntled fish look.

Do they not clinic the looks of their cars I wonder?

Just like the new Mercedes A-class, BMW have chosen the disguntled fish look.

Do they not clinic the looks of their cars I wonder?

I think they gave up clinics, when most of their current 1 series owners didnt realise it was rear wheel drive.

So the 1 series' two USPs - 6 cylinders and RWD - are being taken away to leave us with another unattractive hatch. Oh dear.

So the 1 series' two USPs - 6 cylinders and RWD - are being taken away to leave us with another unattractive hatch. Oh dear.

Because the majority of vehicles this size have 3 or 4 cylinders, possibly a turbo and are front wheel drive, when asked, a lot of their owners didnt even know it was rear wheel drive. They have finally realised what the majority of manufacturers did in the 70s and 80s, small family cars need to be front wheel drive to give up a decent amount of passenger and boot space. Austin figured that out in the 60's with the original mini, its only taken BMW half a century to catch on.