BACK TO ALL NEWS
Currently reading: Opinion: An electric performance future needs sounds of the past
UP NEXT
Aston Martin DB5 Junior gains special No Time To Die Edition

Opinion: An electric performance future needs sounds of the past

With some exceptions (new Ford Bronco, anyone?), I do subscribe to the belief that parts of the car industry need to try to look forward, not always draw inspiration from the past.

But this only works if the future-thinking engineers, developers and product planners truly subscribe to the belief that things on their patch will get better, not worse. Generally, there’s lots to like about the very latest crop of electric vehicles (EVs): they're highly accelerative, clever, brilliant around town and easier to live with than ever. But I still reckon there’s one, very crucial thing stopping many car enthusiasts - including those inside the industry - from getting on board.

Take the Porsche Taycan. It has received generous armfuls of superlatives throughout the year so far, and deservedly so. I was lucky enough to drive one just before the lockdown was imposed in March, and on my favourite local road (I’m not telling you where; it’s already getting too busy).

Simply put, it’s the most fun I’ve had in an electric car, and by quite some margin. It’s an EV that can live with proper sports cars, not just in terms of acceleration but of handling, too. Yet my hairs weren’t standing proud on the back of my neck, like they were a few days prior on exactly the same road in my 14-year-old BMW 330i.

It’s obvious where I’m heading. A number of EVs have had a stab at artificially generated sound, but pretty much all emit a humming, sci-fi whoosh deemed suitably space-age for the new electric generation. The Taycan’s isn’t too offensive, but I’m finding myself increasingly convinced that more brands need to have a crack at offering realistic combustion engine notes in their EVs. 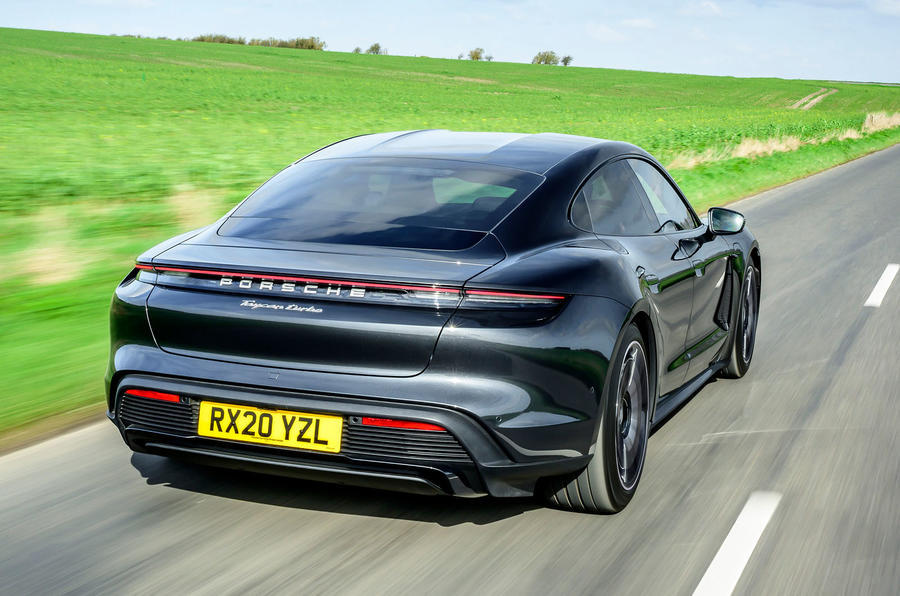 I guess many will consider that sacrilege: why pump in an engine note when it doesn’t have one? And, of course, many prefer the eery silence. But I reckon that if done properly, faithfully (and with the option to turn it off when you’ve had enough), it could revive an element of the familiar ICE driving experience that I consider vital to truly engage petrolheads.

Renault did this with the previous-generation Clio RS: you could choose to pump in the engine note of cars such as the Nissan GT-R or Renault 8 Gordini through the speakers. But it was, frankly, pretty naff. The sound was about as faithful to the original as an early-1990s arcade game, and it wasn’t very well synchronised with the revs.

Imagine what could be done in 2020, with properly financed input from the people who design the spookily accurate engine notes on recent Gran Turismo video games, for example. There’s opportunity for marketing departments to do what they always love – shamelessly shoehorn in their history to a largely unrelated modern-day product – but in a more welcome way for enthusiasts.

Maybe Audi Sport could keep the sounds of its naturally aspirated V10 alive long after the death of the engine itself, for example? And imagine Ferrari’s spine-tingling V12 in surround-sound as you belt across the Pyrenees in Maranello’s latest electric supercar - with external silence to keep the locals happy.

But it could easily be external, too, given that European law now dictates that all EVs must emit a pedestrian-warning tone at certain speeds. Why pump out an anodyne hum to the world when it could be a V8 woofle?

It’s all a bit of fun, and fun is what's missing from a number of EVs. Teslas make fart sounds and other such silliness, so is it so ridiculous that you could download the straight-six howl of the BMW M3 CSL into the infotainment system of your BMW i4? Let us know what you think.

Talking of Tesla, the aftermarket is already on this one. Check out this sound generator from German firm Kufatec:

Why Tesla's most important model yet brings few surprises

I like the idea of being able to choose the 'engine' sound on an electric car. It might make me more likely to buy one. I do think there should be a limit to the amount of noise it produces externally though.

Surely a business opportunity here to sell loads of noise generators to the Formula-E boys.

Is Lawrence Allan still a cub