BACK TO ALL NEWS
Currently reading: BMW i4 electric saloon shown in near-production form
UP NEXT
Alfa Romeo to show new sports car in early 2023

Tesla Model 3 rival is based on the 4 Series Gran Coupe, has 523bhp and offers a 373-mile range
Open gallery
Close

BMW’s upcoming i4 electric saloon has again been shown as a concept, this time as a thinly veiled production preview.

The all-new four-door model will be an integral part of an extended range of BMW i electric cars that are due for launch by 2025. Planned to go on sale in the UK in mid-2021 as a direct rival to the Tesla Model 3, it is claimed to make as much as 523bhp and have a range of up to 373 miles.

The i4 is based on the second-generation 4 Series Gran Coupé, which is set to be revealed later this year. Like its combustion-engined sibling, it takes a three-box silhouette with a distinctive cab-rearward profile. This is to help it appeal to traditional BMW customers, moving away from the controversially styled i3 hatchback of 2013.

Drawing inspiration from the forthcoming iNext SUV, the i4 has clean and taut surfacing that is aimed at providing it with class-leading aerodynamic efficiency. 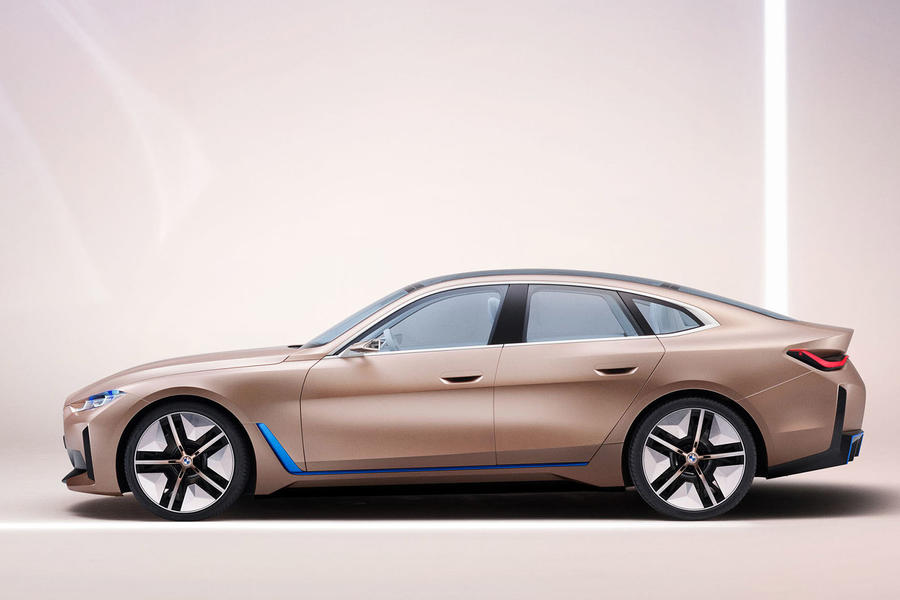 Among the key design elements on the third model to date from the i sub-brand is a bold kidney grille, similar in size and shape to that of last year’s Concept 4. The i4 also shares that car’s thin headlight treatment, heavily curved roofline, high-set notchback rear end and OLED tail-lights.

Illuminated blue highlights on the grille, down the flanks and in the rear diffuser mark the i4 out as an EV. These are expected to be retained when production of the i4 begins in Munich, Germany, during the third quarter of 2021.

Other new design developments incorporated include flush door handles and aerodynamically optimised wheels. The Concept i4 also sports BMW’s new logo, which takes a two-dimensional design in order to make it more suited to digital marketing.

Inside, the Concept i4 has a clean and simplistic dashboard that supports a single curved HD display housing the instruments and infotainment system. It also features the latest iteration of BMW’s iDrive controller, grouped together with touch-sensitive controls on a wide centre console that spans the length of the cabin.

Previewing the powerplant that is set to be used in the production i4, the Concept i4 features a BMW developed-and-produced electric motor that makes up to 523bhp – 69bhp more than the 3.0-litre six-cylinder engine of the M4 CS. Mounted up front, beneath the long bonnet, it provides drive to all four wheels via an as-yet-unspecified gearbox. BMW hints at a 0-62mph time of 4.0sec and a top speed in excess of 124mph. 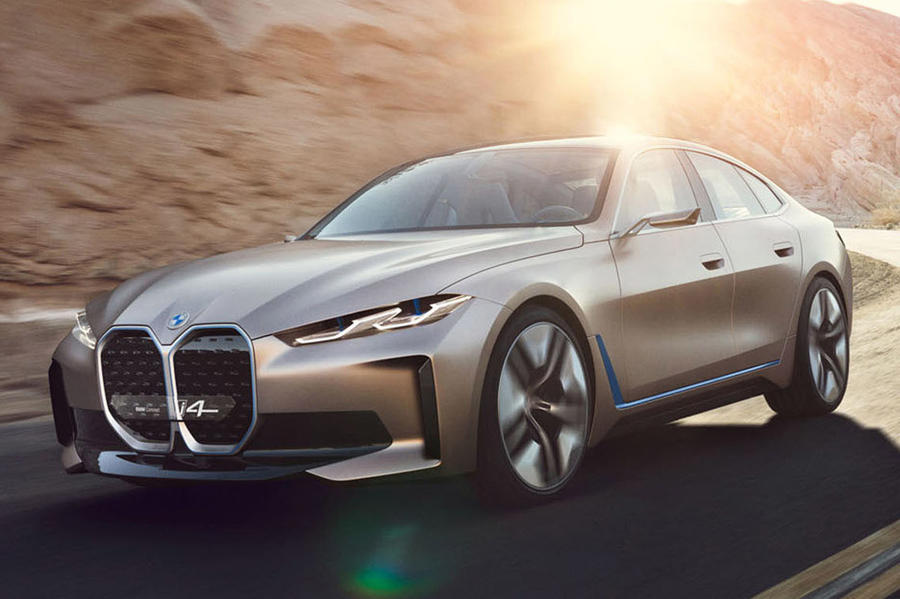 Underpinning the i4 is a modified version of BMW’s CLAR architecture, which has been given a new rear floorpan in order to house an 80kWh lithium ion battery pack. Described as “extremely slim and optimised for energy density”, this is claimed to weigh around 550kg.

BMW quotes a range of up to 373 miles for the i4 on the WLTP test procedure. This matches the range achieved by Tesla with the Model 3 Long Range, which uses a 75kWh lithium ion battery.

As with that car, the i4 is also expected to be offered in rear-wheel-drive form with a smaller-capacity battery.

In a move set to be reflected by the production version of the i4, the Concept i4 offers three driving modes: Core, Sport and Efficient. As well as the drivetrain properties, these alter the graphic display and ambient interior lighting.

Also affected are the acoustics of the car, which have been developed by BMW in co-operation with renowned composer Hans Zimmer.

Death of the hofmeister kink

is this finally the end for the traditional distinctive BMW design feature that has recently become more and more bastardised? Times change I guess.

1. This must now take the prize for having the most horizontal rear windscreen (or is it close with that new Polestar concept?) The severe rake of the vehicle front to back is actually managed quite well by the feature lines

2. Designer not really thought of markets with front number plates spoiling his grille - will we see return of offset Alfa 159 plates on these (can’t see transparent reg plates taking off)

is this finally the end for the traditional distinctive BMW design feature that has recently become more and more bastardised? Times change I guess.

1. This must now take the prize for having the most horizontal rear windscreen (or is it close with that new Polestar concept?) The severe rake of the vehicle front to back is actually managed quite well by the feature lines

2. Designer not really thought of markets with front number plates spoiling his grille - will we see return of offset Alfa 159 plates on these (can’t see transparent reg plates taking off)

I don't think the rear screen looks that close to horizontal, certainly not as much as my old crz anyway.

I could live with the hideous

I could live with the hideous grill, but surely having a bonnet that large is a criminal waste of space in a new EV. You are driving around in a car that is 1-3 foot longer than it needs to be... And if they gave you that space as cabin or boot space it would probably be an amazing car. Either way this is only a car to get if available on a really cheap lease.
View all comments (16)