From £28,35010
Brilliant handling smarts allied to greater sophistication and completeness than any 3 Series before it
Open gallery
Close

The ‘G20’ new-generation BMW 3 Series for you – maybe. While its UK sales will be dwarfed by those of the 320d (a full road test on which you’ll be reading here in the coming weeks), the 330i M Sport will hold plenty of appeal to those who want a quicker 3 Series than the average – and who can find the budget to pay for it.

Better thought of as a sporty mid-range option than a range-topping nearly man, the 330i will, before long, be flanked by BMW’s forthcoming 330e plug-in hybrid version, and outstripped by the M340i xDrive M Performance option. Even for now it’s not the most expensive 3 Series derivative, since it undercuts BMW’s slightly more powerful 330d by just over £2000.

In a 330d, of course, you still get a BMW straight-six engine for your money, whereas the 330i was moved to four-cylinder turbo petrol power with the last-generation ‘F30’ 3 Series. BMW normally aspirated petrol straight sixes being as good as they are (or, rather, were), some of us still aren’t over that.

It’s worth observing, however, that if Munich hadn’t taken that controversial decision, we wouldn’t now be looking at a 330i that emits only a solitary gram more CO2 than a contemporary 330d, according to the latest EU certification lab tests, and that therefore qualifies for benefit–in-kind company car tax some four percentage points lower than the car once considered the UK’s dream real-world company sport saloon.

BMW UK’s pricing menu for the 3 Series makes the 330i available in Sport and M Sport trims, but in automatic form only and without the option of xDrive. The Sport version is cheaper and gets softer, longer-travel suspension as standard – but if you want adaptive damping, ‘variable sport’ steering, a non-run-flat performance tyre or BMW’s torque vectoring electronic rear differential on your 330i, you can only get them on the M Sport version (which also gets uprated brakes into the bargain, as usual). Our test car had adaptive dampers and conventional tyres, but not the clever diff. 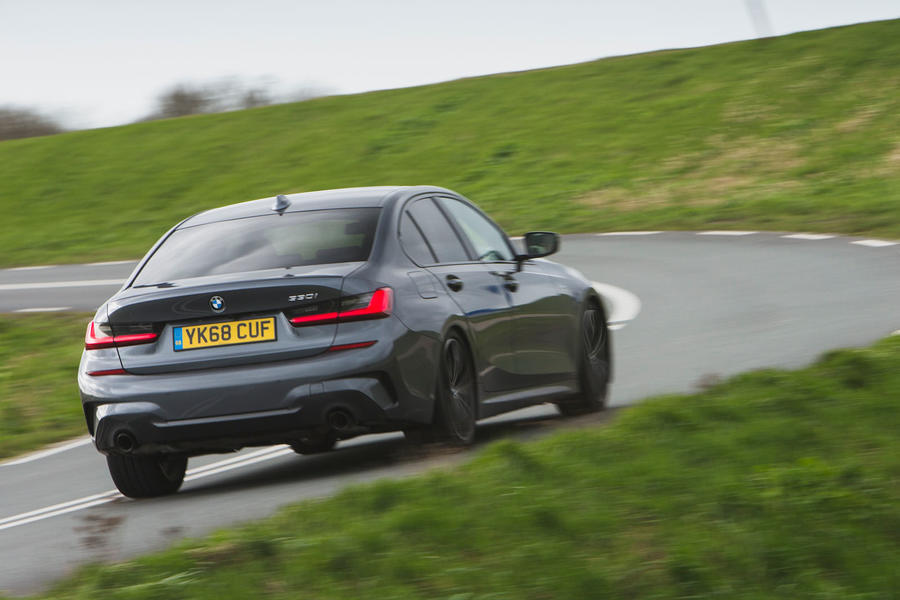 The G20 3 Series has greatly impressed us at every opportunity thus far, and the 330i M Sport, tested on UK roads, continues the trend. Those upgrading from the outgoing BMW will quickly appreciate the strides it makes on cabin richness, perceived quality, technological sophistication and interior space – and in most of those respects, you’d say the car is as good or better than anything else in the compact executive saloon segment.

It’s the classy, expensive look and feel about the car’s various cabin fittings that probably most clearly sets the car apart from its predecessors. For the first time in a 3 Series, you feel as if you’re snug in a bubble of widescreen, chrome-garnished, expensively solid modern luxury in the driver’s seat.

The digital instrumentation may not be the most conventional or readable you’ve ever seen but, between the digital dials and the head-up display, it certainly furnishes you with every last bit of driving information you’re likely to want in one way or another. This tester particularly liked the layout of the oversized head-up display screen, which usefully prioritises putting a speedometer, selected gear indication, your selected driver assistance and cruise control settings, and navigation directions and mapping into your natural line of sight.

BMW’s new 10.3in Operating System 7.0 infotainment system (standard on M Sport cars, optional elsewhere) is, at first acquaintance, a bit less easily navigable than iDrive multimedia set-ups used to be, mostly because there’s now a home screen on it whose content and layout you can configure to your own preference – but, until you do, it simply serves as one more layer of complication. Thanks to BMW’s rotary controller and its surrounding shortcut keys, though, you’re never too far from the menu or function you need – and, meanwhile, BMW’s latest voice control software rarely misses with a navigation destination or music request, even at its first attempt.

The 3 Series’ driving experience is tweaked and tailored from a spot on the centre console not far from that iDrive controller. Instead of a toggle switch to jump between drive modes, the G20 has a line of individual mode buttons adjacent to the gear selector: Sport, Comfort and Eco Pro on all cars, plus an additional Adaptive mode for cars with Adaptive M suspension. A double-press of the Sport button allows access to secondary Sport Plus and Sport Individual modes, the latter permitting the mixing of softer settings for one system with firmer/noisier/angrier ones for the next.

It’s heartening to report that, even in Sport Plus mode, the 330i M Sport’s four-cylinder engine isn’t made to sound too digitally contrived by the car’s audio system’s engine noise impression routine. Equally, the engine’s audible character isn’t quite left unmolested, so you’re just about aware that there’s a bit of digital remastering going on when you’re delving deep into the car’s accelerator pedal travel. 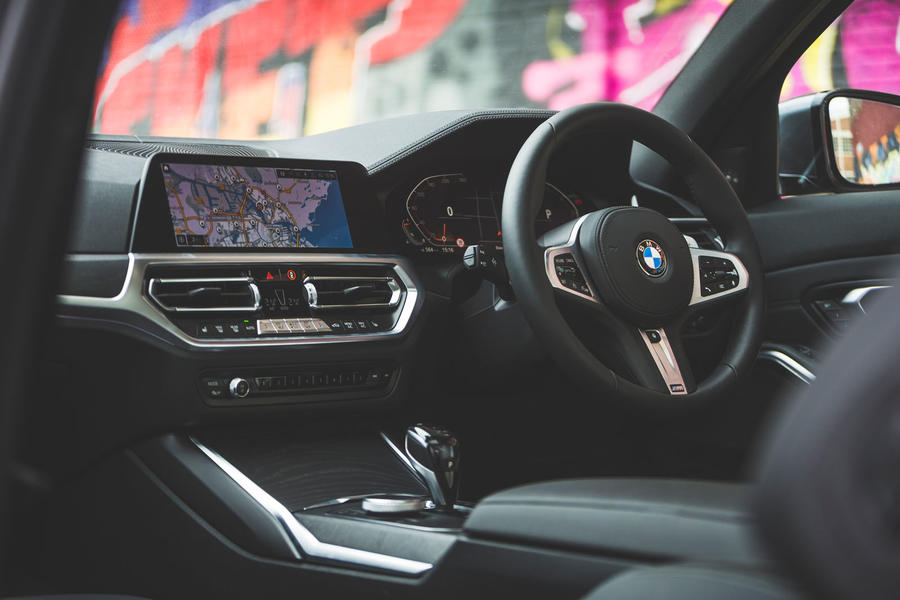 Genuine or otherwise, the engine doesn’t sound like a perfectly balanced straight six, and it doesn’t rev out with quite the silken freedom of one either. It’s something you won’t fail to notice if you’re familiar with older, higher-end 3 Series - but that you do feel unfair complaining about when, in 2019, there is only one sport saloon left on the market that offers multi-cylinder petrol power for 330i M Sport money: the Kia Stinger GT S. Everything else in this niche now uses a high-output four-cylinder engine, just like the BMW. And, for the record, while you’d probably give the 330i’s motor the nod, for its mix of responsiveness, range, outright performance and smoothness, over any direct rival made by Jaguar, Mercedes or Audi, you’d have to admit that an Alfa Romeo Giulia Veloce’s turbo four-pot is a little bit more potent- and zesty-feeling.

The 330i’s engine can certainly be refined when you want it to be – and pretty frugal too given that 40mpg is easy to hit in mixed, unhurried use. The car’s eight-speed automatic gearbox combines well with it whatever the style you’re adopting, engaging gears smartly and choosing them well in ‘D’; being more eager to downshift and hold revs in ‘S’ without becoming hyperactive; and shifting quickly and with assurance in manual mode.

The car’s ride and handling has similar versatility – assuming, that is, you’ve plumped for adaptive dampers. The 330i M Sport comes with passive sport suspension, 18in alloy wheels and run-flat tyres as standard, but if you splurge on BMW’s M Sport Plus option package, you get 19in rims, adaptive dampers, performance tyres (Michelin Pilot Sport 4 S) and BMW’s M Sport active diff at extra cost.

We had a chance to compare our 330i M Sport with that option pack (diff notwithstanding) back to back with a 320d M Sport without it – and while the wheel and tyre upgrade doesn’t do much to improve cabin isolation (which is by no means objectionable anyway), the adaptive suspension does calm down and round off the 3 Series’ passively damped M Sport primary ride a bit. It remains more animated and firm than the compact executive saloon class norm, but isn’t a long way from irksome or uncomfortable as a result.

What the 3 Series gains as a result of that suspension tuning is handling agility and driver engagement that nothing else like it can equal. An Alfa Giulia Veloce feels slightly narrower, lower and lighter on the road, and is similarly agile – but isn’t as precise or assured when turning in, and its electronic driver aids are much more intrusive.

The 330i, by contrast, steers with weight intuitively matched to its pace, and reacts to directional inputs so crisply and proportionately that your control over its front wheels feels utterly immediate and instinctive. It resists body roll very well, but permits just enough of it to help you keep track of how hard the tyres are working. And it has a blend of security of grip level, cornering balance and progressive handling adjustability that puts it in a league of one for driver appeal. 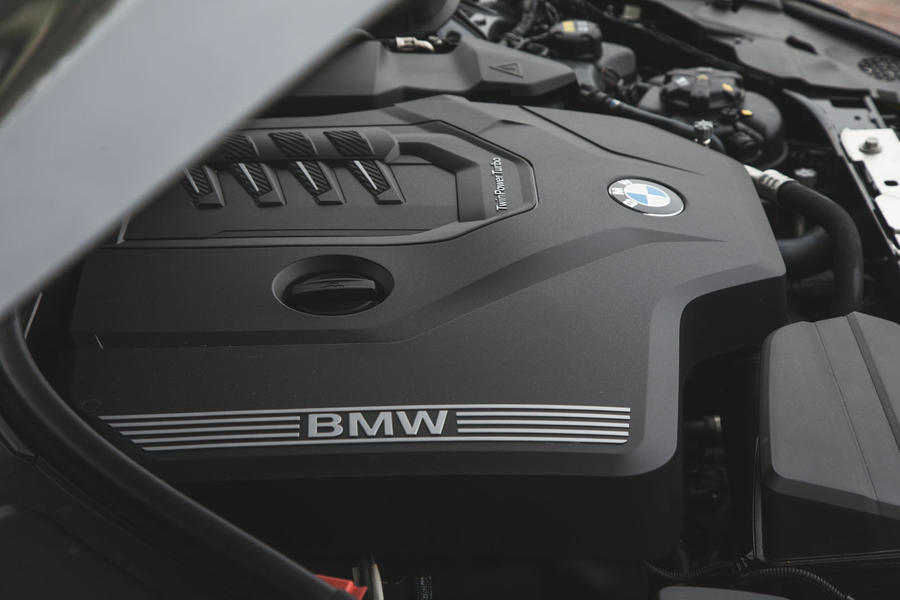 The 330i M Sport is fast, poised and engaging to drive; pleasant, upmarket, refined and practical; advanced and well-equipped – and yet competitively priced and realistically fuel-efficient. It’s a very hard car to find a serious, reasonably held fault with.

That the executive set has cheaper, bigger, more laid-back and left-field options is true enough. But this car excels at the traditional job description of a BMW 3 Series in almost all of the important ways, and brings new qualities to the table too. It’s authentic and technologically contemporary-feeling with it; great to drive and more complete than any 3 Series before it. 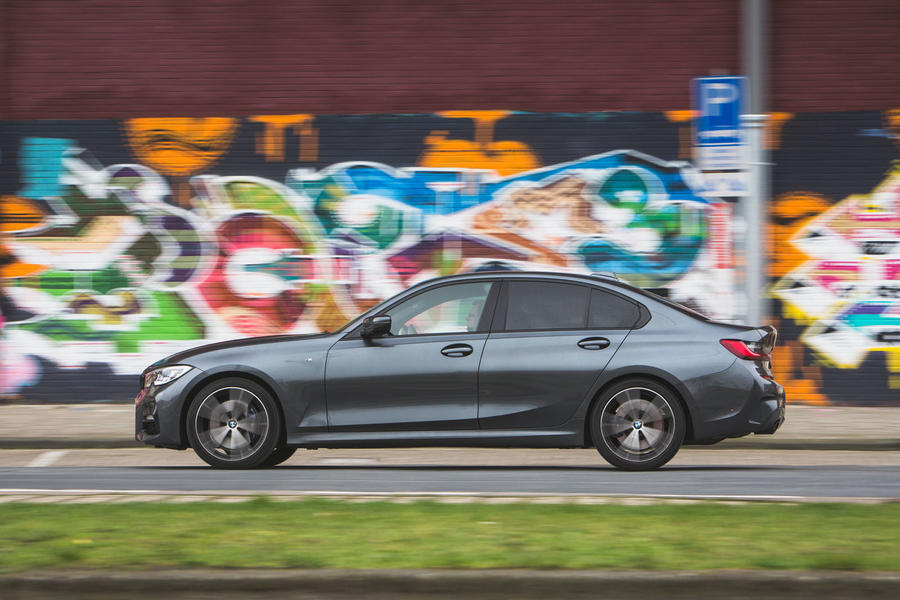 how can this be a 5 star car, when its got a dodgy over fussy ride, that doesnt really calm down even with the expensive adaptive suspension, and an over complicated instrument cluster, and its plain ugly with a grill thats downright offensive..

No progress on their '3.0' models for some years

With most of its rivals producing a fair bit more power than the 330i I'm surprised BMW hasn't eeked out more bhp from this 2.0 turbo. The equivalent (albeit N/A) engine in the E90 330i from 15 years ago had more power and even the previous (F30) 330i was underpowered compared to the E90. Quite unlike BMW not to be keeping pace on the power front.

With most of its rivals producing a fair bit more power than the 330i I'm surprised BMW hasn't eeked out more bhp from this 2.0 turbo. The equivalent (albeit N/A) engine in the E90 330i from 15 years ago had more power and even the previous (F30) 330i was underpowered compared to the E90. Quite unlike BMW not to be keeping pace on the power front.

The reason for having six, eight, ten or indeed twelve cylinders was to produce more power, more torque, but now you can get three, four cylinder engines producing two hundred horse power upwards and in some cases more torque too, and EV cars have even more power a vastly more torque instantly!,so anything bigger than four cylinders is eventually going to be unnecessary, smaller engines means less weight which in turn makes the car lighter, faster, maybe more fuel efficient,and maybe handle better, and ok maybe not in our lifetime, but ICE cars will disappear......