Ford has revived the long-running Bronco nameplate after a 24-year absence for a new family of rugged SUVs. The line-up will include two-door and four-door versions of the four-wheel-drive Jeep Wrangler rival, along with a more road-focused Bronco Sport.

The Bronco was launched by Ford as a two-door Jeep rival in 1965 but has been out of production since 1996. The long-awaited revived versions are part of Ford's strengthened commitment to the lucrative SUV segment and are designed for the hugely popular off-road market in America. There are no plans to offer either version in the UK.

Both the Bronco and Bronco Sport - shown in the below video - are now available to order in the US, with deliveries due to start later this year.

The Bronco will feature a ground clearance of 11.6 inches, a maximum 29deg breakover angle and a 37.2deg departure angle, along with the ability to ford water up to 33.5 inches deep.

Independent front suspension will be standard, with a solid axle at the rear that features coil springs and five locating links. Long-travel Bilstein dampers will be available as options. There will also be an optional semi-active hydraulic stabiliser bar, which Ford says offers extra articulation and increased ramp angle. 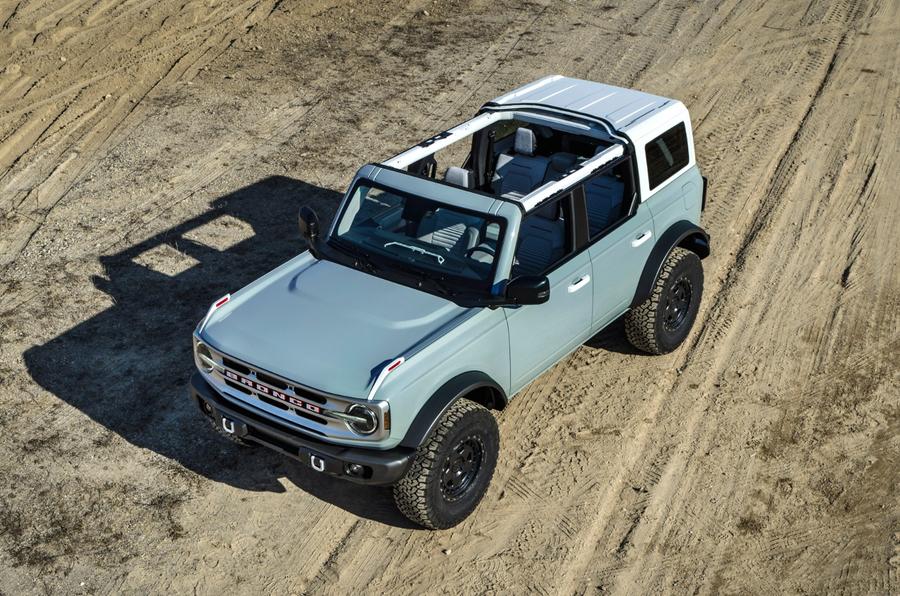 The interior of the Bronco features an instrument panel inspired by the first-generation model, with Ford putting a focus on “tough and rugged” materials to ensure durability and ease of use when off-roading. The 8.0 or 12.0in touchscreen features the latest version of Ford’s Sync 4 infotainment system and has access to more than 1000 curated trail maps.

The Bronco will be offered in six trim levels, with the base version joined by Big Bend, Black Diamond, Outer Banks, Wildtrak and Badlands specs. There will also be more than 200 accessories.

Launched alongside the new off-roader, the Bronco Sport is described by Ford as “the Bronco of small SUVs” and expands the nameplate to a more road-focused vehicle for the first time. As with the standard Bronco, there are no plans to launch it in the UK.

Although the Jeep Compass-rivalling Bronco Sport takes its retro styling cues from the regular Bronco, it is built on a different platform, utilising Ford’s C2 architecture that also underpins the Focus and Kuga. 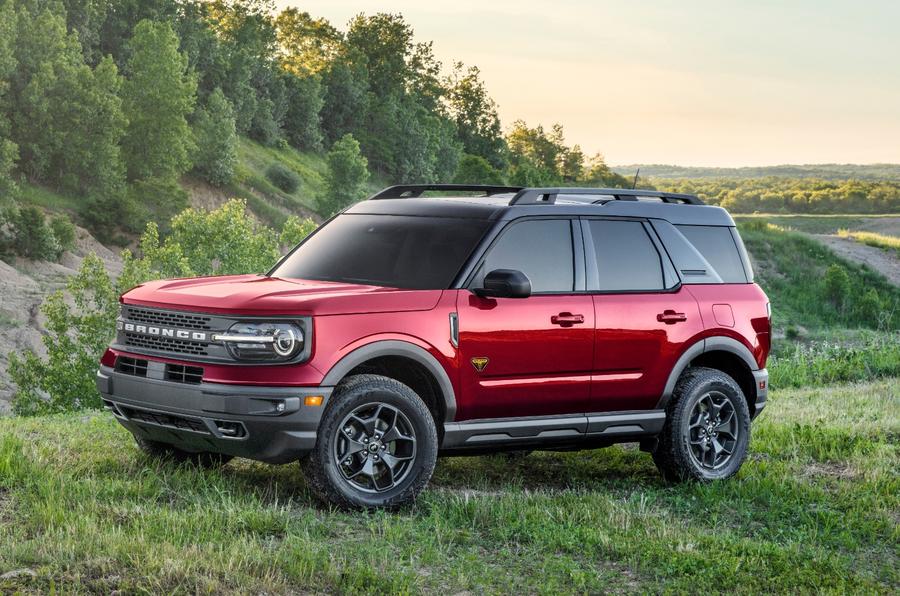 While it's built more for on-road use, the Bronco Sport offers four-wheel drive as standard and is designed to still be capable off road. High-end models will feature an advanced 4x4 system that features a twin-clutch rear drive unit with a differential lock.

The Bronco Sport will be offered with a choice of two Ecoboost petrol engines: a 1.5-litre unit producing 179bhp and 190lb ft, and a 2.0-litre unit with 242bhp and 275lb ft. Both engines will use an eight-speed automatic gearbox as standard.

As with the regular Bronco, up to seven GOAT driver models will be offered, depending on trim. All models will feature independent front and rear suspension, while higher-end models will gain specially tuned front struts with hydraulic rebound. The Trail Control suite of off-road driver assistance systems will also be offered.

The Bronco Sport features a more comfort-focused interior, although still features washable rubber flooring and easy-to-clean cloth seat covers. The boot is designed to accommodate two standing mountain bikes, while LED floodlights can be built into the tailgate. The rear window can be opened separately from the boot, while a slide-out working side table is also offered.

Ford’s Sync 3 infotainment system features an 8.0in touchscreen. More than 100 factory and aftermarket accessories will be offered.

.... what percentage of these vehicles will actually be used in such rugged off-road conditions, that the rear axle will make any difference whatsoever?

Something tells me it will be very low indeed, and that in 99.9% of situations, the Land Rover would cope just as easily as the Bronco.

As for talk of Rock crawling and such like - I can't see anybody buying a brand new Bronco for that sort of activity.

and it comes with 7 speed

and it comes with 7 speed manual with crawl....Im sold man,,,

I am pointlessly throwing my wallet at the screen hoping it will come to the UK.