BACK TO ALL NEWS
Currently reading: New Vauxhall Mokka to gain 'bold' new design
UP NEXT
Driving the legends of the secret Mercedes archive

Vauxhall has released the first official sketch previewing the front-end styling of the new Mokka SUV, which will introduce a design philosophy that will eventually be rolled out across the firm’s line-up.

As shown by previous official images and spy shots the second-generation Mokka,  which will be available with a fully electric powertrain from launch,  takes its design cues from the radical GT X Experimental concept from 2018. The new sketch shows the grille of the car, which is now integrated with the matrix LED headlights into a feature the firm has named the ‘Vauxhall Vizor’.

Vauxhall said that the “unmistakable front” design will “become a hallmark of all Vauxhall models in the course of the 2020s with the idea of further clustering top technologies.” While the Vizor will likely house cooling radiators on combustion engined cars, on the forthcoming electric Mokka-e it will also be used to house sensors, cameras and other driver assistance systems.

Mark Adams, Vauxhall-Opel’s design boss said that: “Our new ‘Vizor’ theme is very clear and distinctive, whilst also having a clear historical connection to the Vauxhall Firenza, which has a similarly clean horizontal layout with crisply defined centre crease.”

The manufacturer has previously said that the small SUV, which will now be badged simply ‘Mokka’ rather than Mokka X as previously, will be up to 120kg lighter than the first-generation model. The weight saving is largely due to the switch to the PSA Group's CMP modular platform, which also allows for multiple different powertrains.

In the electric Mokka-e the batteries will be mounted lower in the platform's floor, which, Vauxhall claims, increases torsional rigidity by 30%.

It will also sit lower to the ground than the first-gen Mokka - a characteristic of the PSA Group’s CMP modular platform - and feature a clamshell bonnet and bluff rear end like that of the larger Grandland SUV. Vauxhall says it will retain a similar wheelbase and tyre sizes to the first-generation car.

The new Mokka has undergone winter testing in the Arctic Circle and development running at the Rodgau-Dudenhofen test centre in Germany. The firm says the recent development focus has been on interior sound, high-speed stability and ensuring "Vauxhall-typical steering and pedal feel".

The EV is expected to have a 134bhp electric motor and 50kWh battery and be capable of covering up to 200 miles on a single charge. Petrol options will each be 1.2-litre turbocharged three-cylinder models and a 1.5-litre four-cylinder diesel will also be offered.

The interior has yet to be previewed, but it's expected to largely match that of the Corsa, albeit with a greater emphasis on space. Vauxhall said the cabin will be “fully digitised” for a “modern and progressive look”.

Vauxhall boss Stephen Norman said: “‘The new Vauxhall Mokka will change people’s perception of our brand. Not only does it show that we’re serious about electrification, but also that we’re not afraid to innovate with design, both inside and out of the car. The Mokka is still in its development phase now, but it is set to be one of Vauxhall’s most important models when it arrives with customers at the start of next year.” 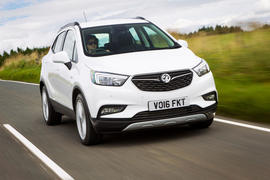 New design in the metal

I'm looking forward to seeing this new design in the metal.  I was disppointed that the new Corsa did not feature it seeing as it was hastily redesigned to fit a PSA platform.

It's hardly a "bold new design" though.  I'm sure if you look at the front end of a Chevrolet Camaro you will see something similar.

As frontal design goes, this

As frontal design goes, this could look good, and certainly makes a change from the large, deep grilles other manufacturers seem to think are so vital.

Vauxhall are being 'selective' with their history references though: It was the Viva that had this style of grille, the Firenza was just an up market development of that model. I guess saying it references the Viva doesn't sound as good as Firenza ....