Vauxhall/Opel has revealed a sporty new B-segment SUV concept at its design centre in Rüsselsheim, Germany. Dubbed the GT X Experimental, it has been produced to provide a clear view of a changing design language for the brand.

The GT X, which is “far more than just a concept car”, according to its maker, has been planned both to mark Vauxhall/Opel’s acquisition by the PSA Group and to demonstrate that much greater design freedom is coming to future new Vauxhall and Opel vehicles. 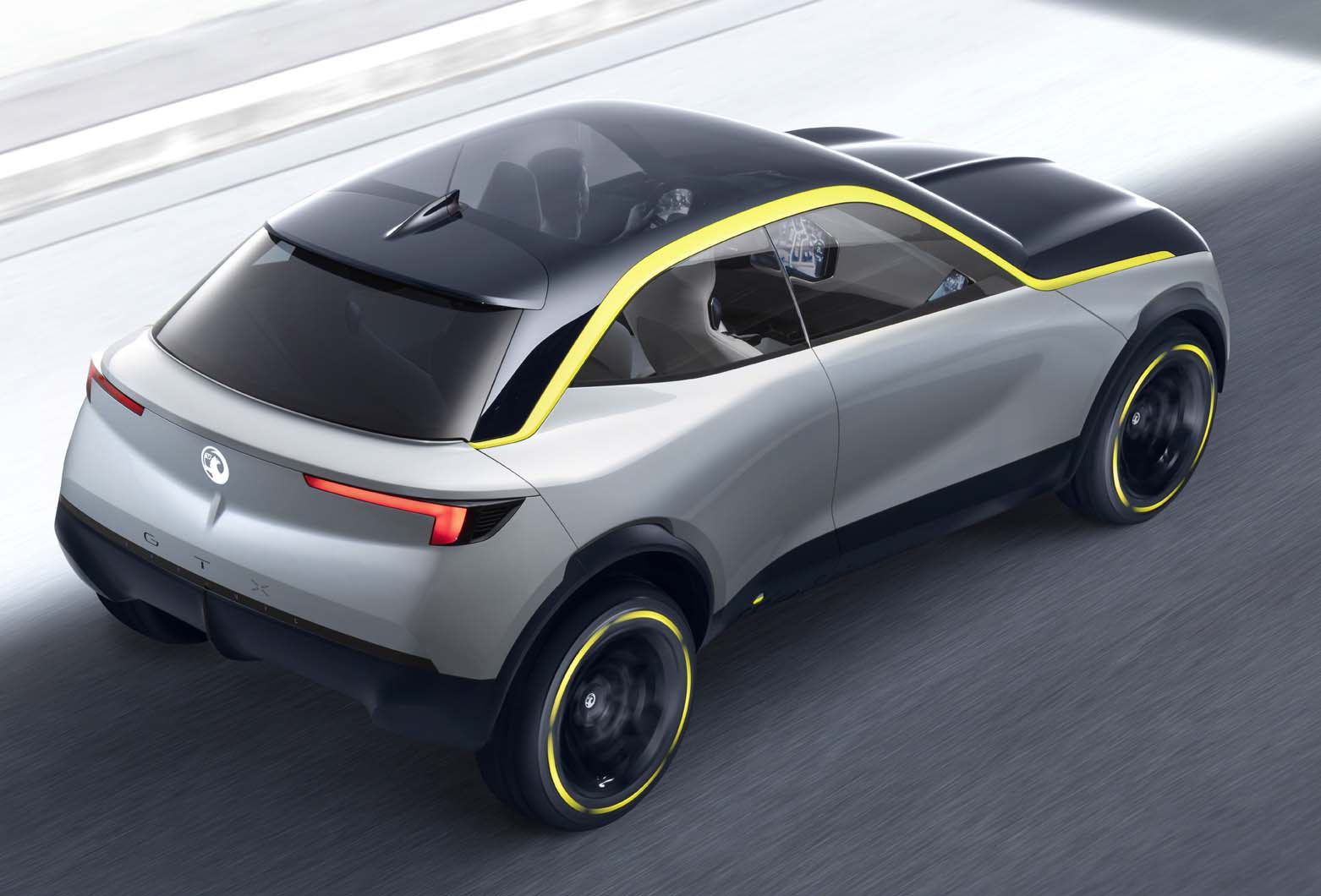 Although quite different in its proportions, the GT X bears an obvious similarity to Vauxhall’s previous, much-praised concept, the two-door GT coupé, for which a successor was always promised. The GT X (the ‘X’ conveys a crossover function) is much more practical, having a cockpit that features generous seating for four and reasonable boot space, even within a petite 4.06-metre overall length that makes it around 14cm shorter than Vauxhall’s current B-segment SUV, the Mokka.

The GT X is a front-wheel-drive, pure-electric car, with a 50kWh battery beneath a classic ‘skateboard’ layout. In production, this would give the car range and performance along the lines of the latest Nissan Leaf — something that company bosses say Autocar will eventually be able to verify by driving it — and designers say the underpinnings bear no resemblance to any current Vauxhall/Opel car.

“Don’t think of GT X as a production car,” said the group’s British design director, Mark Adams. “Actually, it’s more important than that. We’re calling it a brand manifesto: a representative of our design vision for the company’s whole portfolio. 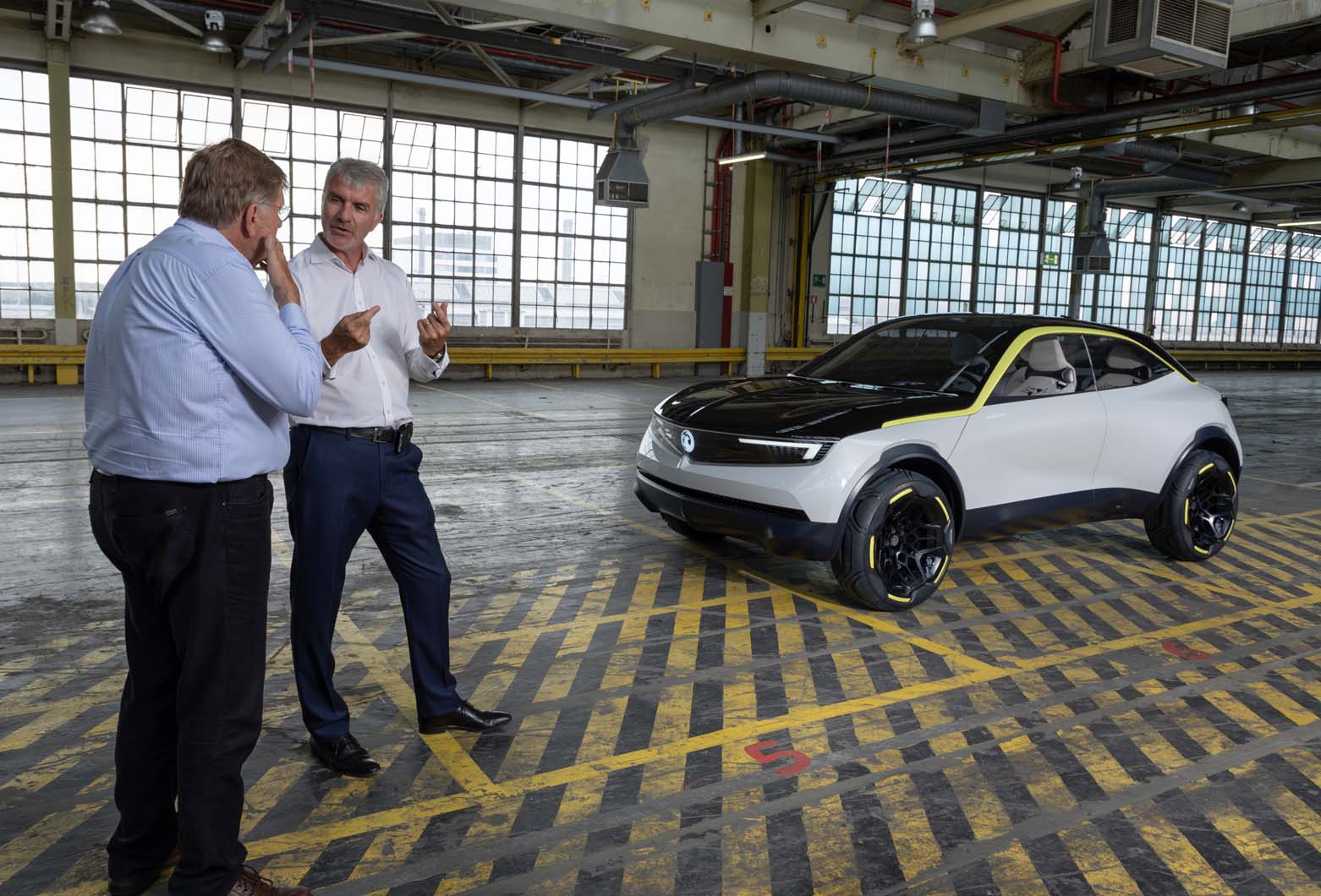 “Before we embarked on this exercise, we did a series of concept sketches to be sure its elements could extend to every one of our cars — and we only proceeded with GT X once we were sure of that. You won’t see this car in our showrooms, but you’ll certainly see much of its influence in future, right through the range.”

The GTX offers a more delicate profile than rival SUVs, mostly because others require so much space for the engine and transmission. The GT X rides high but has very short overhangs, and its radically ‘waisted’ body gives the impression of lightness.

The predominant body colour is a light grey, but a very dark blue covers the so-called ‘technical areas’, namely the battery location below the cockpit and the bonnet.

Opinion: Vauxhall begins the rest of its life 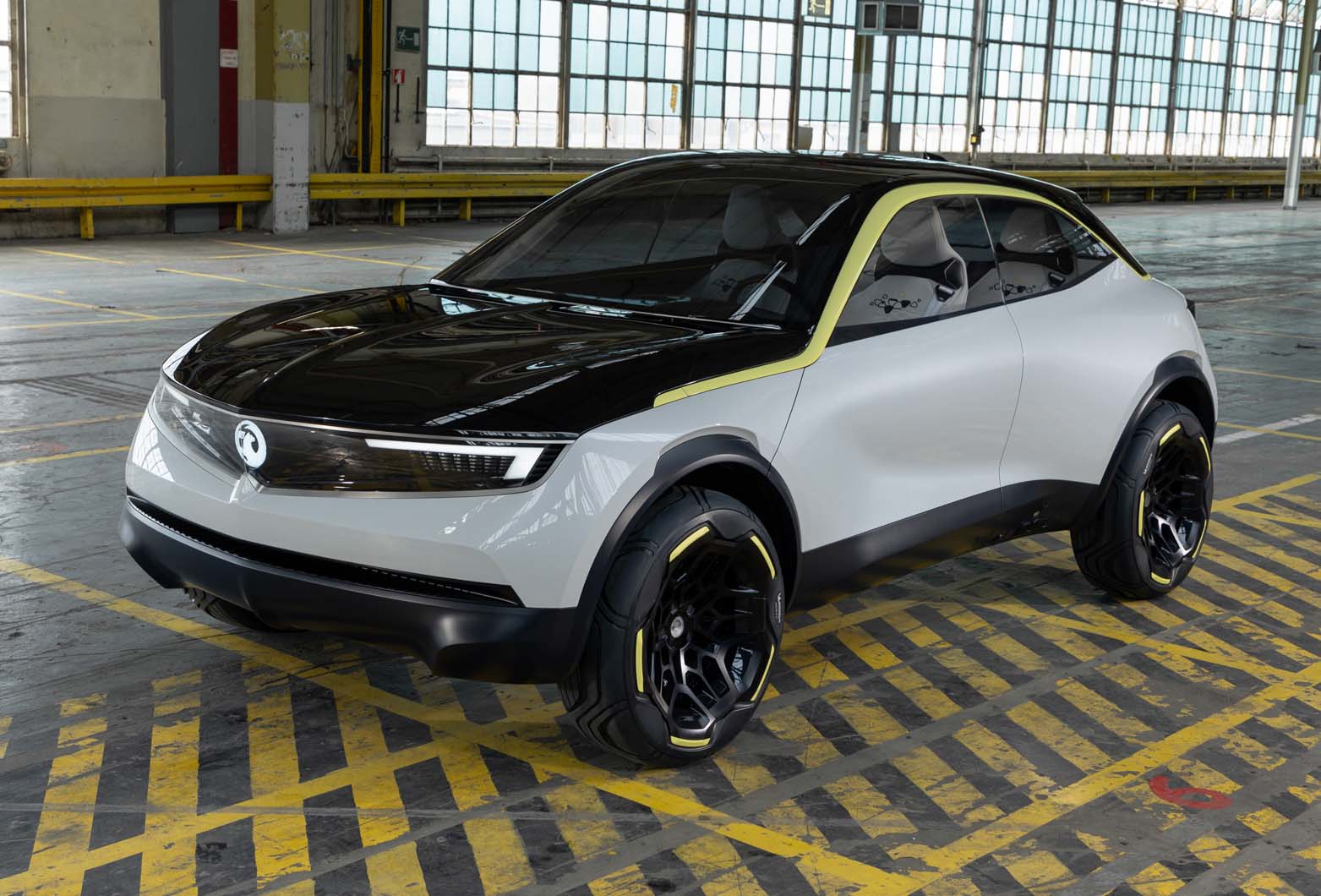 Twin yellow flashes run either side of the bonnet and over the sides of the roof, echoing sports-oriented Vauxhalls of the past. They also encompass a large see-through roof panel.

Sit inside and you'll find the screen pillars are thinner than the production car norm.

The view over the bonnet is panoramic; it is set low enough to allow for a thin air scoop running across the base of the windscreen, feeding air to the GT X’s HVAC system.

The GT X also transfers over a couple of previously used design devices. The first is the wide ‘Visor’ front end treatment, stretching across the front with a near-opaque panel to house the matrix headlights and cover additional features including cameras and a radar for a semi-autonomous driving system. 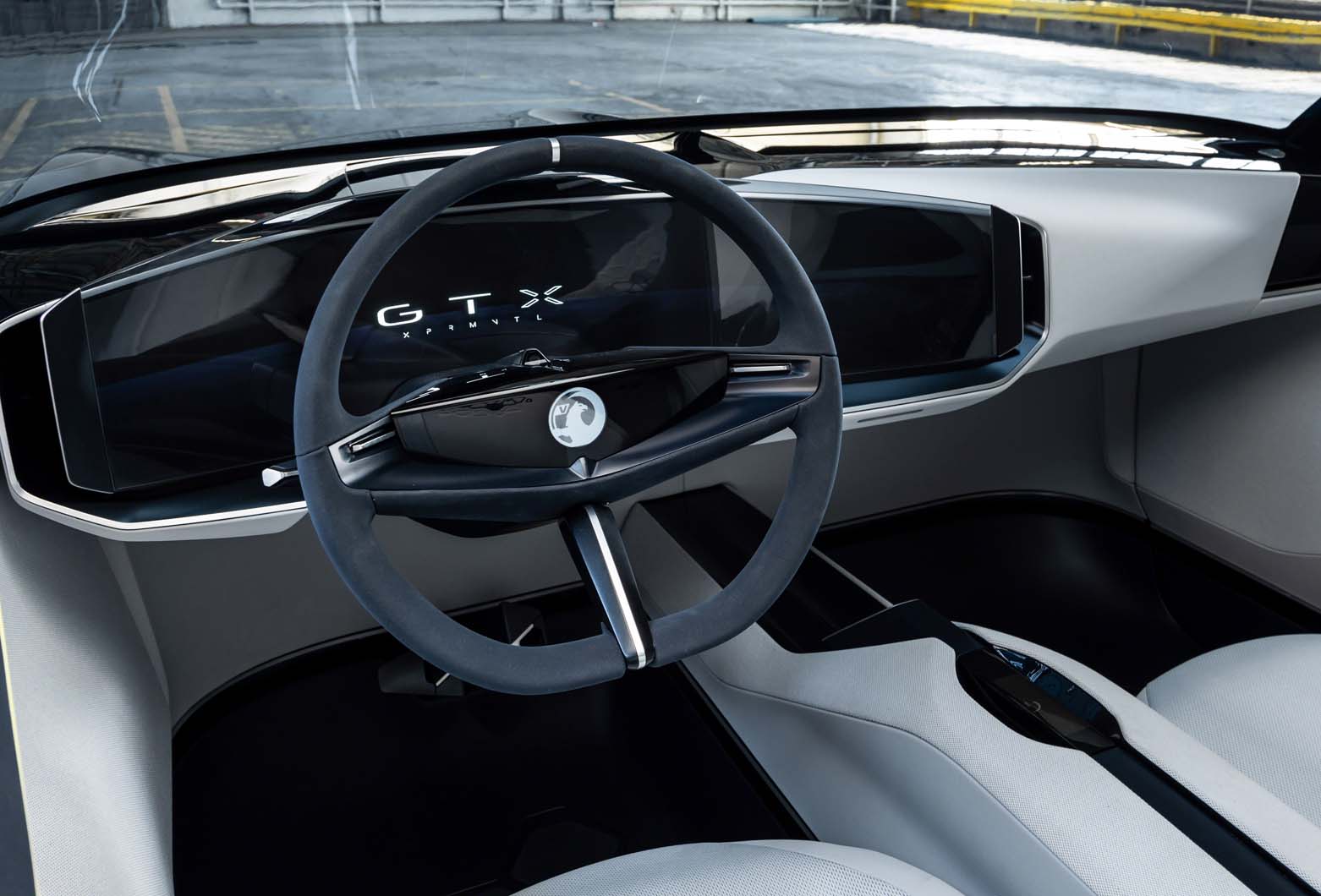 The second is the ‘Pure Panel’, consisting of a simple screen the size of a normal instrument layout incorporating all major functions, and can be operated by voice, touch and wheel-mounted switches. The seats can be adjusted by eye-tracking, while there’s a head-up display for the driver.

The GT X also offers a neat system for ingress and egress. Each of the ‘clap hands’ doors — which need no centre pillar — is suspended on a single large hinge, allowing occupants’ legs and feet to swing easily into and out of the cabin. The front seats are suspended on rails running along the car’s centre console, bringing better foot room for rear passengers.

There’s even a display on each exterior sill, with LED triangles showing the car’s battery condition and whether it’s charging or not. Other clever features include rear-facing cameras that pop out of the yellow rails on the bonnet to take the place of mirrors and aluminium covers that partially conceal the sidewalls to make them look like low-profile tyres. 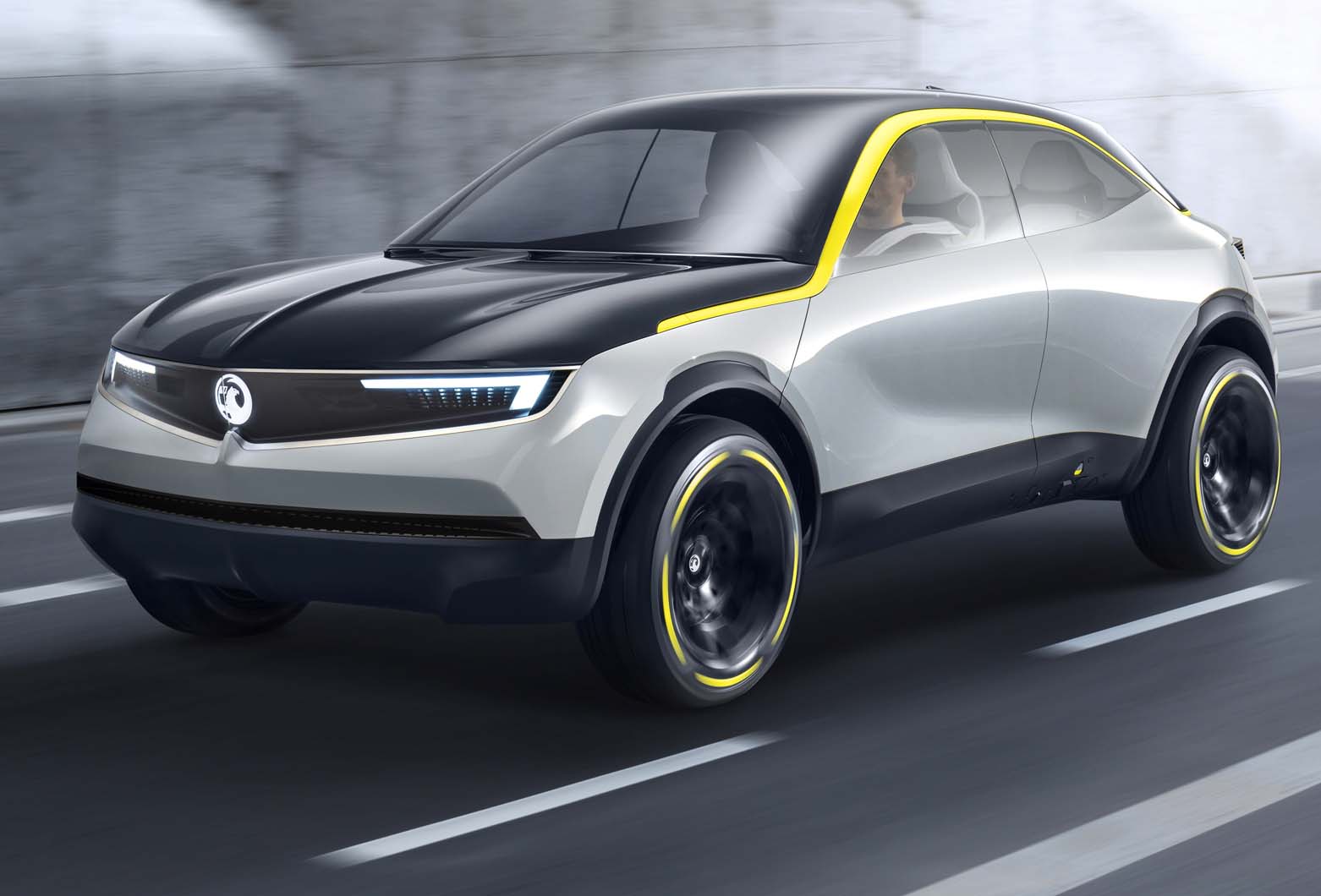 Vauxhall/Opel intends to stress the GT X’s significance to its future by putting it on public display in each of its most important markets, starting with Germany and the UK.

“This is no ordinary concept,” says Adams, “it’s a rallying cry. It’s the pride of our brand on wheels. We designed and built it ourselves to demonstrate what we could do. Small but believable concept cars can be hard to do — people expect scale and flamboyance — but we’re really proud of this one.”

How we helped shape the GTX, by Autocar picture editor Ben Summerell-Youde:

Although the GT X has since evolved, Autocar was involved in the early days of creating Vauxhall’s concept.

Soon after the PSA buyout deal was announced, the former General Motors brands were looking to establish themselves with a reimagined and thoroughly modernised design strategy. A show-stopping concept car was in order and Vauxhall turned to us for help. 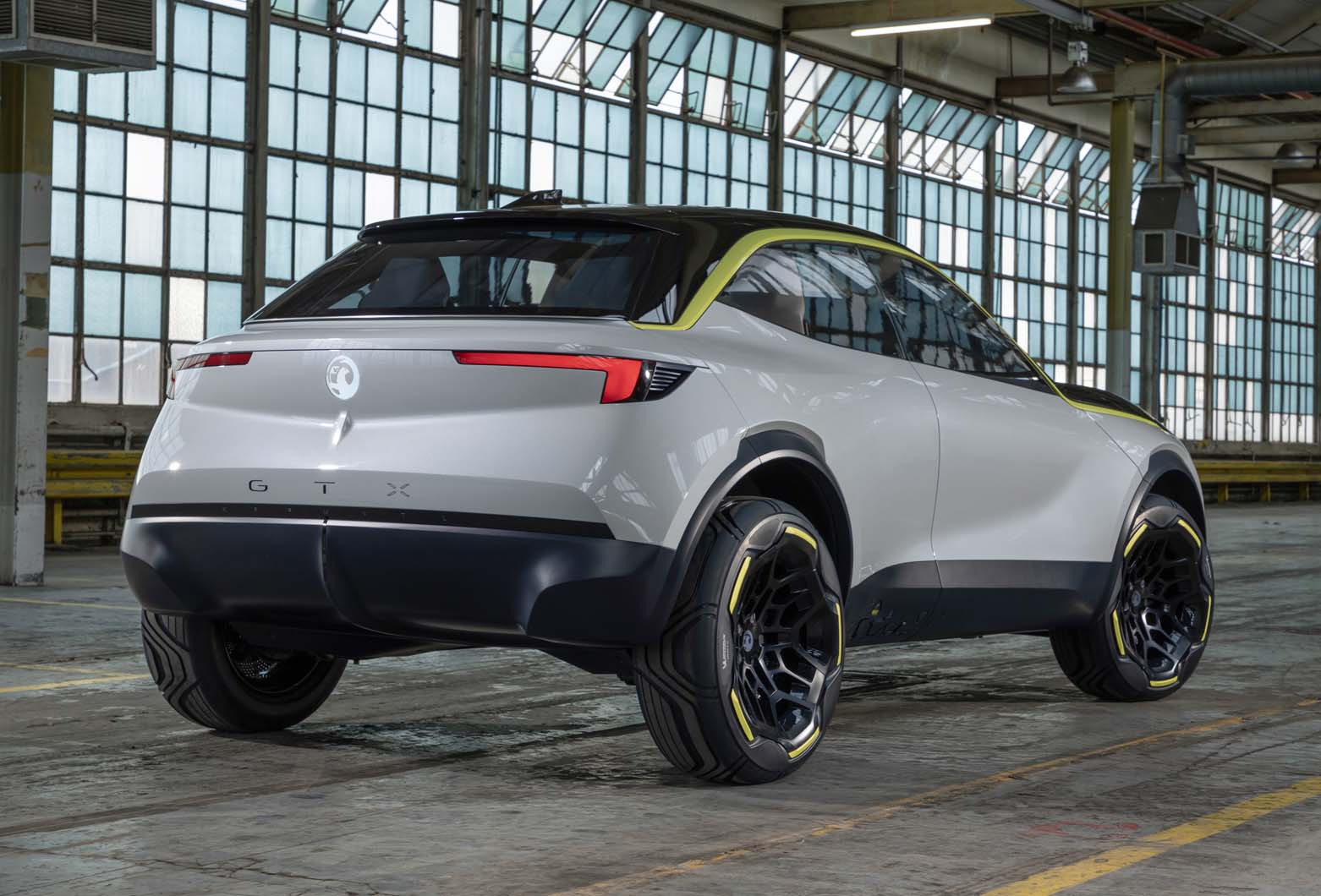 Our involvement began with discussions between Adams, to whom we contributed ideas about how the concept could look inside and out.

Our designs focused around a D-segment saloon, but it’s clear that some inspiration and details have been transferred from our initial drawings to the finished concept.

We’re happy to play a part in Vauxhall’s reinvention, however small…

This would make a decent beach buggy if you got a tin opener to it. Its shocking as it is. Electric offer designers a whole new mindset and auticar fuddy duddies screwed up big time.
What yiu have us a chassis and batteries along floor sides etc. Very short front and back loads riim between as six seater 3x3 and a wheel in each corner guving you mini type handling ( original mini - not the bliated pig of bmw easy weasy. Now get your pencils out and do it with imagination not old hat
View all comments (12)