BACK TO ALL NEWS
Currently reading: New Mercedes E-Class: UK prices and specs announced
UP NEXT
Official: Bristol Cars revival to be led by new Buccaneer EV

Mercedes-Benz has revealed UK pricing and spec details of the new, fifth-generation E-Class ahead of first deliveries in September. 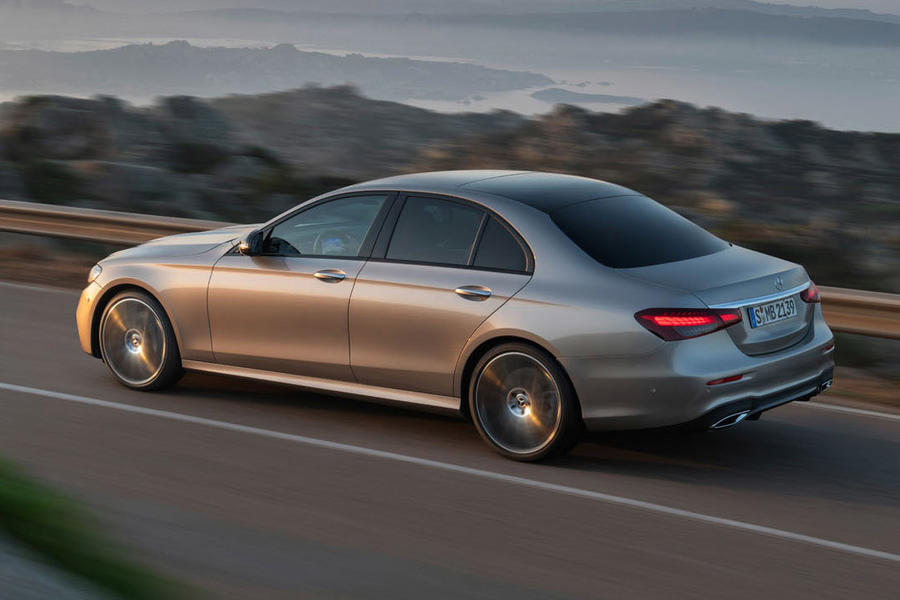 Mercedes has given the fifth-generation E-Class a refresh, with revised styling, new electrified engines and more interior comfort and technology, in a bid to take the fight to rivals such as the Audi A6.

The current version of the long-running executive car was launched in 2016, and for this facelift, the saloon and estate versions have received subtle styling tweaks. These include new-look front and rear lights and bumpers and a grille that features a three-pointed star as standard. Cars in the AMG Line specs gain extra design revisions to bring their styling closer to that of Mercedes-AMG models such as the E53. The rugged All-Terrain estate version has received extra changes that tighten the visual links between it and Mercedes’ SUVs.

While the exterior changes are minor, Mercedes has extensively reworked the E-Class’s electronics, allowing the firm to offer a host of new driver assistance systems, ‘energising’ comfort seats and its latest infotainment technology. The E-Class now comes as standard with two 10.25in screens, for the MBUX infotainment and instrumentation, with 12.3in screens optional.

A new steering wheel design, which features capacitive touch controls, is offered in three varieties and is set to be introduced across the firm’s range.

The revised engine line-up includes seven petrol and diesel plug-in hybrid (PHEV) variants across the saloon and estate bodystyles, variously offering rear- and four-wheel drive. Outputs for the PHEVs range from 154bhp to 362bhp for the petrol units and 158bhp to 326bhp for the diesels.

Other engine options include the four-cylinder M254 mild-hybrid petrol unit, along with six-cylinder petrol and diesel engines, all of which now feature a 48V starter/alternator electric motor. The installation of the EQ Boost system has been tweaked to further improve fuel economy.

Reveals of the saloon and estate will be followed this year by that of the revised coupé and cabriolet, plus a China-only long-wheelbase saloon.

What was the focus of the facelift?

“We’ve really increased the interior comfort. The main objective was to make the car feel more intelligent and more modern inside. We’ve introduced MBUX and there are no more analogue instruments. It’s all digital now.”

How much of a challenge is keeping the diverse E-Class customer base happy?

“The E-Class is used by both private and business buyers, and if you do long distances, you need good ride comfort and comfortable seats.”

How key are the plug-in hybrid models for meeting EU emissions targets?

“Electrification is an important point for the E-Class, and the plug-in hybrid models fit into that. They’ll be available from launch and in right-hand drive. The other engines all have a starter/generator, which is part of a big push for efficiency.”

The spotty grill is beyond

The spotty grill is beyond disgusting.  Like something from a cheap nightclub.

Grille works with the Panamericana theme, but....

While this facelifted E-Class brings the front and rear styling in line with the latest generation of Mercedes, which kicked off with the A-Class, I'm not sure how well a traditonal grille would work with the new front end, especially with the the inverted lights and grille surround. The forthcoming new S-Class could look a bit odd unless the tradtional grille is ditched, which now seems to be the case with this facelifted E-Class.

The forthcoming new S-Class could look a bit odd unless the tradtional grille is ditched, which now seems to be the case with this facelifted E-Class.