From £35,2058
Mercedes has introduced a super-efficient diesel-electric plug-in hybrid powertrain to the E-Class. Is it any good?
Open gallery
Close

Here is a potential solution to the biggest problem with pretty much every plug-in hybrid (PHEV) on sale today.

You see, PHEVs represent for many a great stepping stone to the seemingly inevitable fully electric future of motoring. They’re also a boon to company car drivers, thanks to the significant reduction in benefit-in-kind tax rates they bring.

That’s great, of course, but many businesses that have replaced diesels with PHEVs have actually seen their fuel bills rise, due to users racking up high mileages, where the economy benefit lessens, or simply never bothering to charge them.

While education is a key factor to improving this, it also exposes the main issue with most of today’s PHEVs: once the small electric-only range is gone, you’re left with a heavy car powered by a relatively inefficient petrol engine. Drive a Mitsubishi Outlander PHEV down a motorway on an empty battery and even 30mpg is a bit of an ask at times.

Mercedes-Benz is aiming to solve that problem with the E300de: a diesel-electric plug-in hybrid Mercedes-Benz E-Class. It’s an almost unique prospect, not just in its segment but across the whole market. Volvo, Peugeot and Audi all recently sold diesel hybrids in the UK, but those didn’t exactly fly out of showrooms and have all gone off sale since. 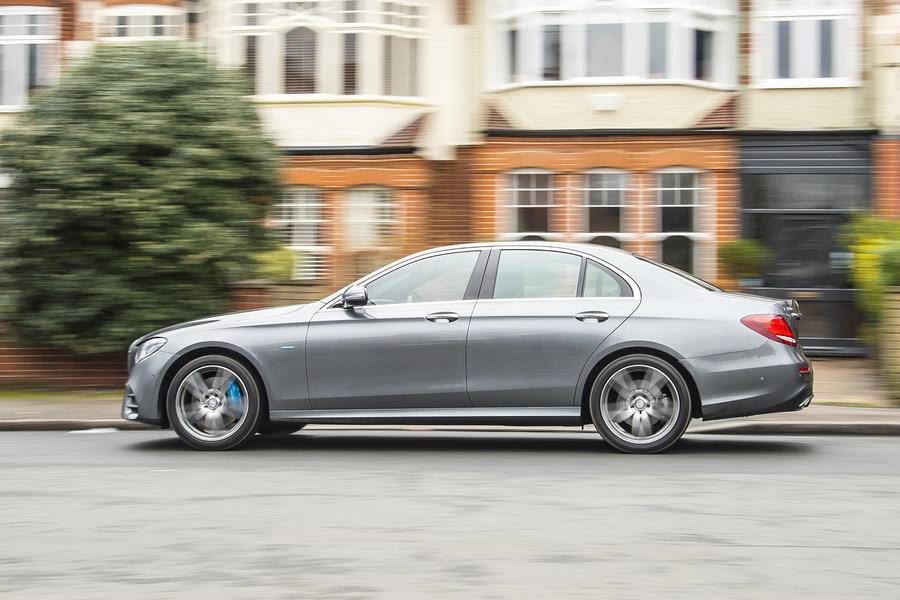 The E300de is good enough to make us reconsider the whole diesel PHEV format, which conveniently disappeared just as the public attitudes towards the fuel started to change.

Under the bonnet is the familiar 'OM654' 191bhp 2.0-litre four-cylinder diesel engine that does thoroughly decent service in the E220d. It's mated to an electric motor offering up 120bhp and, more importantly, 325lb ft of torque. The combined system output is a healthy 302bhp and 516lb ft - 14bhp less than the petrol-hybrid E300e but with the same torque output.

This powertrain resolves one of the big stigmas of oil-burners: its healthy 34-mile electric-only range from a 13.5kWh lithium ion battery means any concern over pollutants in cities are quashed. That range is obtained from a 1.25-hour charge from a 7.2kWh charger or five hours via a three-pin household plug.

Bring it into life - silently, of course - and it defaults to Comfort and Hybrid modes. This is a happy medium for the most part, as the powertrain will opt for electric power as much as it can. Measure your throttle inputs (i.e. don’t just clog it everywhere) and it allows a decent turn of pace in electric mode – easily enough to get up to motorway speeds without struggle.

With a healthy level of charge in the battery, you’ll usher in the engine only up really steep gradients or under full throttle. Doing so exposes perhaps the biggest flaw with the diesel-electric set-up: refinement. This is one of the less intrusive four-pot diesels in its class, but against the silky near-silence of electric mode, its presence at lower speeds is noticeable enough to have you back off to try and convince the system to shut it down again.

There’s also another flaw with the powertrain in Comfort driving mode. Decide you need a burst of power to pull smartly out of a junction and it sometimes dithers for a split-second, seemingly unable to decide whether to switch on the engine or not before firing away.

Nevertheless, once above 50mph, where executive cruisers like this are most at home, the transition between diesel and electric power is relatively seamless. When the engine does kick into life, it balances driving the wheels and releasing charge into the battery.

The result is impressive real-world efficiency: a 110-mile round trip on mixed motorway and A-roads with a full charge at each stop yielded nearly 130mpg, with the electric motor managing to match its official range. But the figures impress even when you’ve run the battery down; more than 50mpg is easily achieveable if you’re the type to buy a plug-in hybrid and never plug it in. 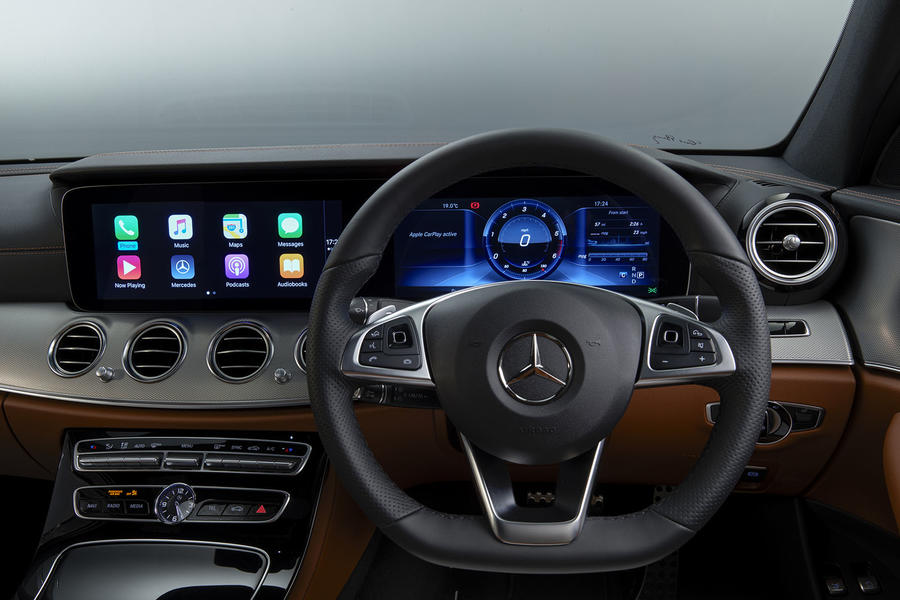 If response is key, Sport and Sport+ driving modes ensure the engine is always on, balancing the two power sources to deliver strong, effortless performance at all speeds. It’s particularly efficient from a standing start, with the electric motor delivering instant torque before the engine spools up to its peak. It lacks the smoothness of a six-cylinder diesel, but given the efficiency benefits, it's an acceptable trade-off.

As usual, you have the option to hold the E300de in electric mode, rely on diesel power and save the battery at a later date or sacrifice some efficiency to charge up the battery via combustion and brake regeneration. The latter system also has a neat feature: even in our SE model without adaptive cruise control, it uses the distance sensor to apply regenerative force when the car in front begins to slow. The subtlety with which it does this makes it far less annoying than it sounds.

Compromises? Well, the E-Class’s platform isn’t as easy to adapt to hybrid propulsion as newer rivals from Audi and BMW, and that shows in the substantial 360kg weight increase over the equivalent E220d. It makes what was never the class’s most dynamic steer that bit more ponderous and less controlled.

The bulk has also had an effect on the ride. It’s still very comfortable and extremely adept at mile-munching, but a little of the regular E-Class’s lovely suppleness has been lost, presumably because the suspension has been firmed up a touch to compensate for the weight. The lack of adaptive dampers or all-round air suspension on our car didn't help matters; both are options you’ll want to consider fitting. What's more, the brakes can be difficult to modulate, due to a numb-feeling pedal, as is common with regenerative systems.

As we’ve become used to with PHEVs, there’s also a practicality sacrifice. The boot drops 140 litres from the regular saloon's to 400 litres, with an awkward cut-out rising from the floor. Happily, unlike the E300e, the E300de is available in estate form to combat this. 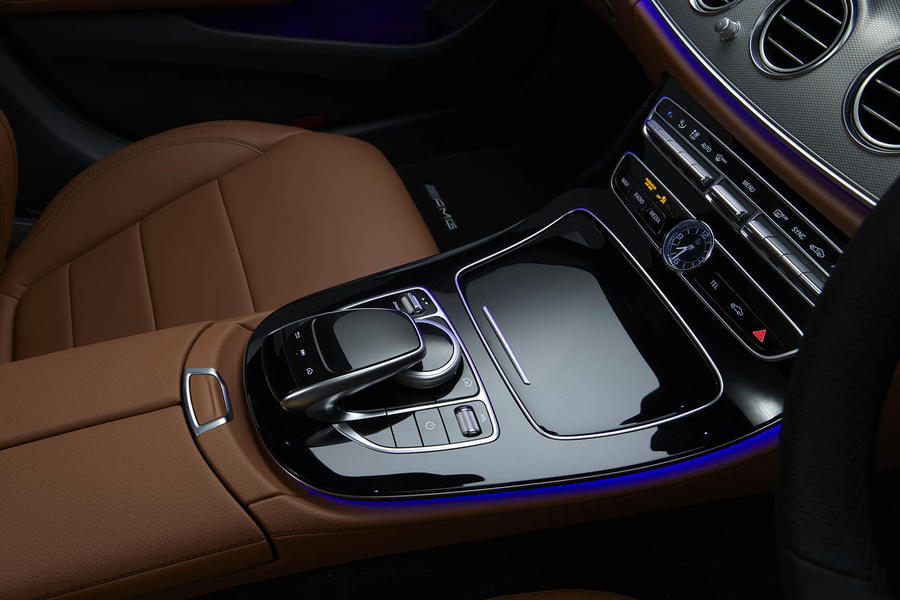 Whether or not you should consider the E300de depends on your situation. Those after an executive car solely to beat London’s Congestion Charge and Ultra Low Emission Zone fee might be better served with the more refined and fractionally cheaper E300e or, better yet, the BMW 530e. If you're not doing the miles, you might struggle to recoup the initial outlay.

But there’s plenty to like about E300de’s set-up, particularly for those who combine shorter commutes with motorway jaunts on a more regular basis. It’s one of the only PHEVs on sale that manages to still be efficient once its battery is depleted, which should be a real draw for higher-mileage private and fleet buyers alike.

There are downsides, of course. Refinement and dynamic ability suffer to a degree, although not to the point where the car becomes difficult to recommend. It’s not cheap, either, but then it’s very much on a par with PHEVs of similar size, prestige and performance in that regard.

Pretty much nothing else short of a pricier, less versatile electric car is capable of combining performance, long-legged ability and fuel efficiency in such a convincing package. 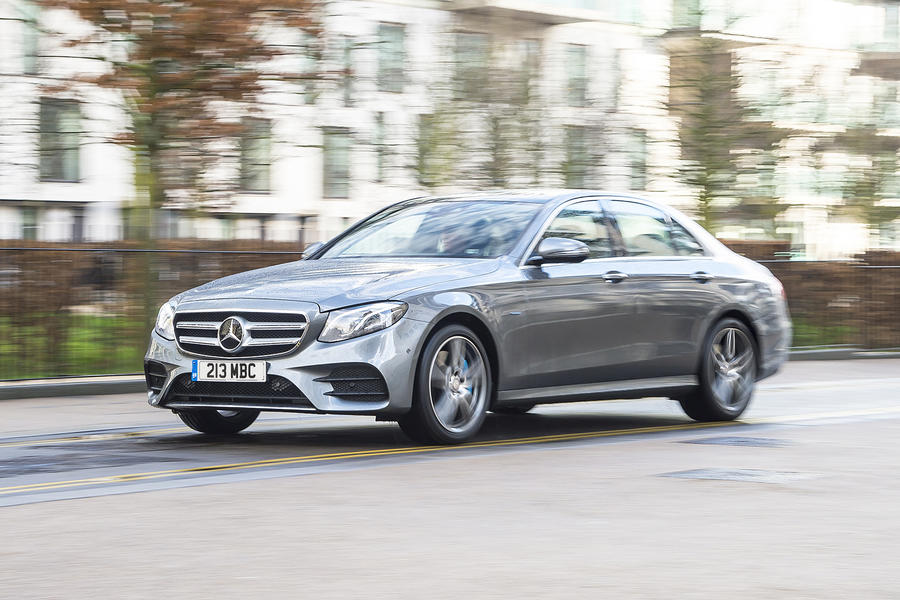 Need suggestion from others.

Who has been able to pick out the best product among those listed on this site?

Who has been able to pick out the best product among those listed on this site?

Cheapest PHEV is £36.7k, cheapest petrol version is £28.4k.   Now I know there's other differences but just how many years will take to pay back £8.3k initial cost in FUEL alone (remember to add electricity costs).

At the end of the day a top spec Diesel version for £31.5k will beat the Hybrid hands down on fuel costs. (I personally still prefer petrol though, not that I'm in the market for any of them)

Cheapest PHEV is £36.7k, cheapest petrol version is £28.4k.   Now I know there's other differences but just how many years will take to pay back £8.3k initial cost in FUEL alone (remember to add electricity costs).

At the end of the day a top spec Diesel version for £31.5k will beat the Hybrid hands down on fuel costs. (I personally still prefer petrol though, not that I'm in the market for any of them)

There is no diesel Outlander any more.  And I sincerely doubt it would get anywhere near the fuel cost of our PHEV the way we use it (fuel database Spritmonitor has 95 PHEVs averaging 68mpg vs 53 diesels averaging 38mpg).  It would also be rattly and unrefined in comparison