From £35,2058
Share review
The E-Class gets a welcome facelift and technological revamp, but if it’s a PHEV you want, the diesel is better
Share
Open gallery
Close

Despite four years passing since its launch, the fifth-generation Mercedes E-Class still occupies a firmly competitive position as one of our executive class favourites.

There are of course now sharper, more engaging and more visually enthralling class contenders. But the E-Class's blend of unrivalled comfort and refinement have stood the test of time, and also maintained its substantial share of the motorway-plodding fleet and business markets.

But four years is an exceedingly long time on the technology front. The focus for the Audi A6 rival’s mid-life revamp, then, is a totally overhauled electrical system, which engineers told Autocar earlier this year makes the new E “more advanced than the S-Class in certain areas”.

Not only does the system allow for a more comprehensive array of driver assist functions - such as Active Speed Limit Assist, which adjusts the cruise control speed in line with traffic signs and bends in the road - it also enables 48V mild-hybrid technology across every combustion-engined variant. The system is claimed to be more capable at boosting efficiency than it was in the outgoing model.

Alongside this, there is of course some evolved styling both inside and out, boosted equipment levels and new colour and wheel options. The usual mid-life-cycle fare, then. 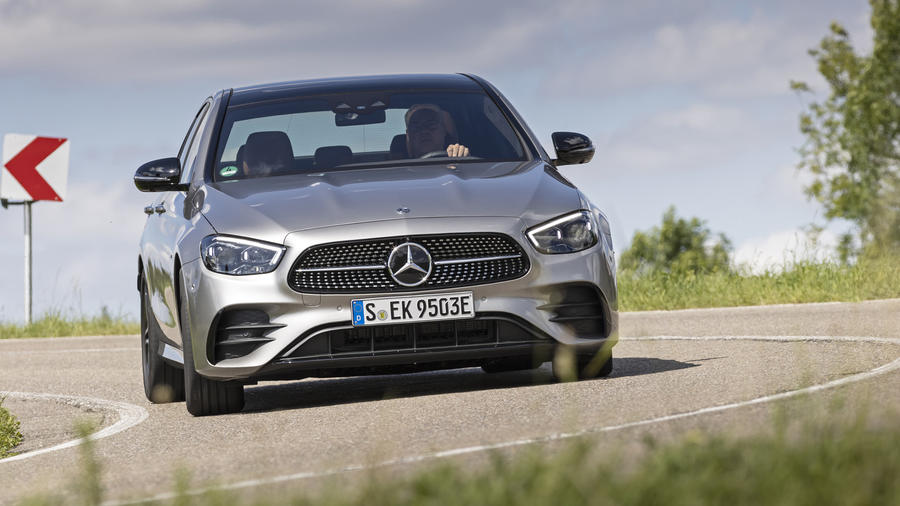 Let’s start with the visual tweaks, which are minor enough for our photographer to enquire what exactly has changed over the old model. The front end carries most of the changes, including standard LED lights inspired by the latest CLS and a new grille and bumper arrangement.

A fresh set of tail-lights has also been added at the rear, but the refresh is unlikely to change anyone’s fundamental opinion on the E-Class’s styling. Frankly, with both core German competitors moving to ever-bolder and more aggressive design approaches, the relatively polite and elegant E is a breath of fresh air.

Things get more interesting inside. Architecturally it’s familiar, yet the detail changes are extensive. The first change is easy to spot: the steering wheel has moved to a more minimalist split three-spoke design, allowing for two separate bars of switchgear to be installed along the two horizontal spokes. These are now capacitive touch controls, which seem a bit form-over-function at first but become more natural to use with practice.

They also allow greater functionality: if you want to adjust the cruise control’s speed by 5mph, for example, you can firmly press the up/down button, while a gentle slide of the finger up or down will increase or reduce the speed in 1mph increments.

Elsewhere, the E-Class has moved to Mercedes’ latest MBUX infotainment and connectivity software. As first rolled out on the brand’s compact models, it’s incorporated into the same dual-screen display set-up (now standard fitment, with a size upgrade in higher trims), but with the right-hand display now touch-operated via the screen itself, with a square pad to replace the rotary click wheel control.

With the more advanced voice control also offered, it’s a case of ‘choose your weapon’ with the control interfaces, and although none proved as naturally intuitive on the move as the old rotary control for this tester, we’ve little doubt that, as is the case with the steering wheel, you’d get used to it.

To complement the new E-Class’s more advanced driver assistance suite, the wheel’s capacitive capability means you no longer have to wiggle the wheel to let it know you’re paying attention in full lane assist mode. Now it can detect your hand grip more effectively, while new connected systems mean the car can slow itself in anticipation of traffic ahead.

Comfort is further enhanced by the optional Energising Plus package, bringing not only more ergonomic seats but also features such as S-Class-style heated door and console armrests, alongside the usual heated and ventilated seats. The seats really are very comfortable, although this and myriad other options contribute to a laugh-inducing sticker price of €96,877 (around £87,500) for this German press car.

Mechanically, beyond the mild-hybrid revisions and some engine tweaks elsewhere in the range, there isn't much to shout about. Suspension changes are minor, focusing on fettling the set-up to work more capably with the latest efficiency-minded tyre compounds.

The plug-in hybrid E300e driven here is also largely unchanged from its introduction last year. Its 13.5kWh battery allows for a realistic 30-mile EV range, while its seamless balancing of power sources makes for smooth, unruffled progress and respectable real-world economy, as long as charging is something your journey profile and home set-up allows on a fairly regular basis. It’s pretty quick and responsive off the line, too, but out-and-out pace isn’t what the non-AMG E-Class is about.

It’s better at a relaxed gait, where the PHEV system's additional weight spread around the platform doesn’t make itself felt to an unpleasant degree. There are zero sporting intentions here - interaction is non-existent, and while body control is reasonably tidy, things get a bit less sophisticated when pushed.

Impeccable ride quality is still the priority here; our car’s optional Air Body Control suspension smoothed out even the worst Hertfordshire and Buckinghamshire's countryside Tarmac could spring at us. 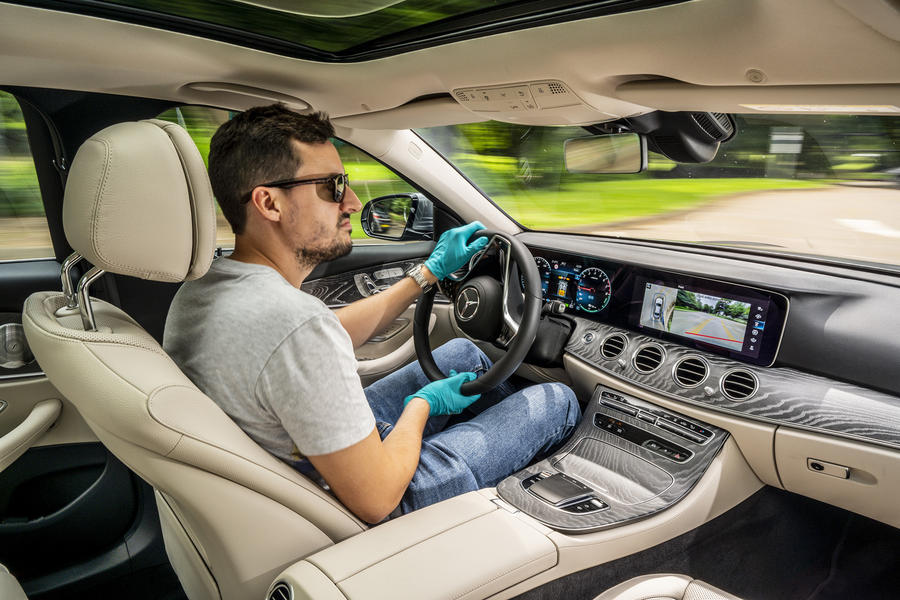 On a more general note, the new E-Class is more technologically advanced but retains the qualities we know and love; namely its ability to devour long distances or cruise around even the most cut-and-thrust city without raising the driver's heart rate.

It's still a strong buy, then, but this E300e isn't the plug-in hybrid variant in the E-Class range we'd plump for. That honour goes to the still relatively novel diesel hybrid E300de. Mercedes may be treading a fairly lonely path with this tech, but there's no denying its credentials: smooth EV performance combined with long-distance diesel capability and the ability to easily break 50mpg on a run once the battery has gone flat.

The 5 Series (and its plug-in offering) remains a superior all-rounder, however, offering about 90% of the cosseting executive experience of the E-Class but with a greater dynamic repertoire should you suddenly be overcome with the need to fling a five-metre-long posh saloon down a twisty stretch of road with abandon. 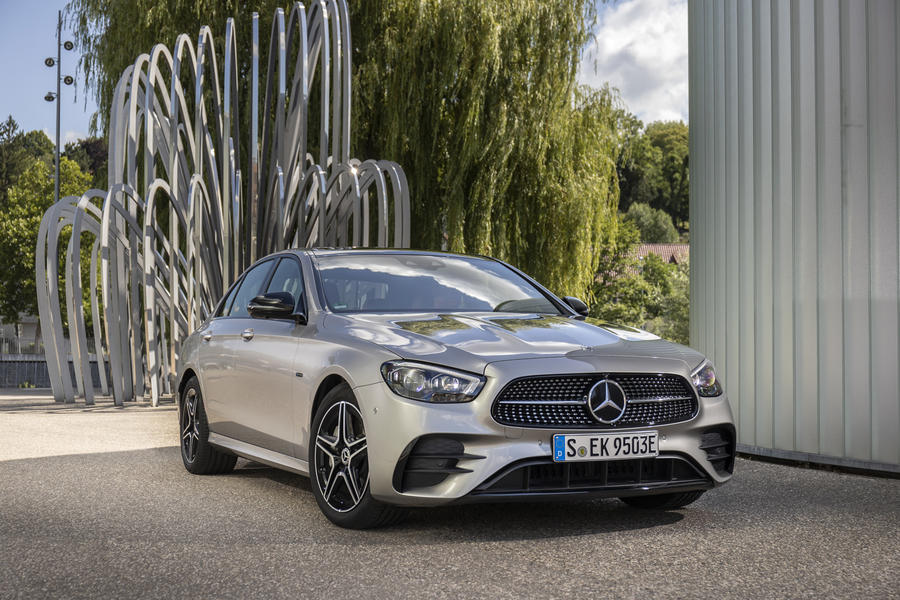 The old steering wheel was nicer ...

They also allow greater functionality: if you want to adjust the cruise control’s speed by 5mph, for example, you can firmly press the up/down button, while a gentle slide of the finger up or down will increase or reduce the speed in 1mph increments
This is not an increase in functionality, the old steering wheel also had this capability by pressing a knurled wheel firmly, or more gently.
Tony123 10 August 2020

The old steering wheel was nicer ...

They also allow greater functionality: if you want to adjust the cruise control’s speed by 5mph, for example, you can firmly press the up/down button, while a gentle slide of the finger up or down will increase or reduce the speed in 1mph increments
This is not an increase in functionality, the old steering wheel also had this capability by pressing a knurled wheel firmly, or more gently.
Eggely 10 August 2020

Is it really worth it?

I've an E500 W211 in very good condition. When I look at the latest model E I really don't see what has changed apart from technology - screens etc... most of the rest looks very similar!

It will still kill me if I don't pay attention and maybe use a little less petrol. I want FSD that only Tesla seem close to.