“It might not look like it, but it’s one of the most comprehensive facelifts we’ve ever undertaken,” says Michael Kelz, laying his hand on the bonnet of a lightly disguised Mercedes-Benz E-Class.

We’re standing in a layby not far from the pulsing neon heart of Las Vegas, where the project leader for the facelifted Nearly-new buying guide: E-Class is taking a break from final validation testing to run through the changes made to the new car ahead of its upcoming Geneva motor show premiere.

This fifth-generation model is a well-known quantity, having first seen UK showrooms in 2017. But behind the mild disguise – hiding subtle styling tweaks that include a wider grille, reprofiled bumpers and a reshaped bootlid – lurks what Kelz describes as literally hundreds of detailed modifications.

"We’ve gone through every individual component and asked ourselves if it can be improved in one way or another," he says. "The biggest individual change is the upgrade to the electrical system. It allows us to add a number of new intelligent driver assistance systems with Level 2 capability and the latest in Car-to-X communications. It’s now more advanced than the S-Class in certain areas.” 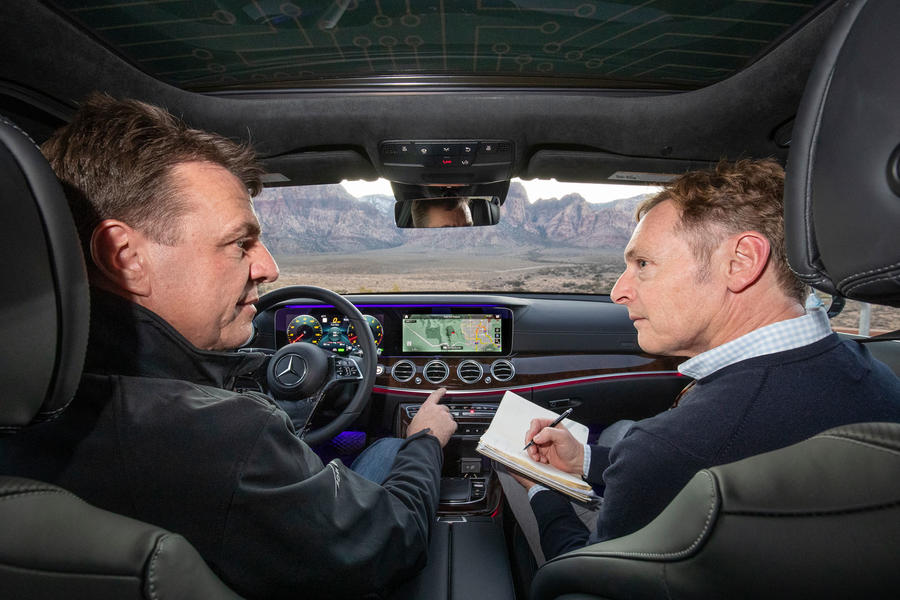 The new electrical system also provides the basis for an upgrade of the MBUX user interface used by the E-Class, bringing the latest in touch, speech and gesture controls together with a “Hey Mercedes” prompt that allows you to control various functions via conversational-style speech.

As before, buyers get to choose between a pair of standard 10.3in or optional 12.3in digital displays for the instruments and infotainment functions.

Further changes brought to the interior of the facelifted E-Class include a new multi-function steering wheel, a new frameless rear-view mirror, revised trim applications and a touchpad infotainment controller - the latter of which comes at the expense of the rotary controller previously sited within the centre console between the front seats.

Starting with the 2020 model, Mercedes is introducing a new trim line hierarchy in which Avantgarde now becomes standard, with the more comprehensively equipped Executive and AMG lines as options.

The prototype we’ve been riding in over smooth surfaced roads through the desert regions of Nevada is the new four-wheel-drive E450 4Matic. It runs the turbocharged 3.0-litre six-cylinder M256 petrol engine with a 48-volt electrical system and integrated starter motor to provide it with mild hybrid properties.

With 362bhp and 369lb ft of torque plus 21bhp and 132lb ft from an electric motor, it boasts tremendously effective low to mid-range performance and outstanding refinement, promising to make it a very convincing alternative to the likes of the Audi A6 50 TFSI and BMW 540i xDrive.

The big news on the engine front for the facelifted E-Class, though, is Mercedes’ decision to replace the previous M274 four-cylinder petrol engine with what Kelz describes as an all-new M254 unit.

The new longitudinally mounted 2.0-litre engine, which will also find its way into a host of other Mercedes models, has been conceived to conform to strict new EU7 emission regulations that are set to come into force by the middle of the decade. As well as being offered in standard form, it will also be offered in both mild hybrid and plug-in hybrid forms. 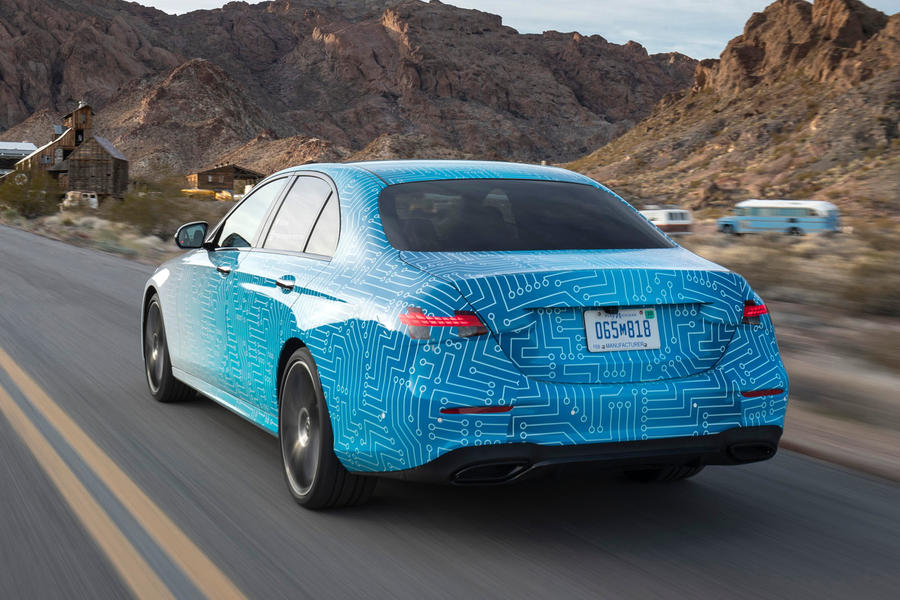 On the diesel front, Kelz promises a “more than 31-mile electric range” from an upgraded version of the E300de, which he says uses a larger lithium ion battery than before.

“We’ve also managed to package the 31.2kWh battery from the GLE350de in the facelifted E-Class to give it an electric range of more than 62 miles,” he says. “However, it will be restricted to the Chinese market, where the E-class comes with a longer wheelbase than models in other markets.”

The man responsible for the engineering of the E-Class in all its various forms - saloon, estate, All Terrain, coupé and cabriolet - says the dynamic character of the facelifted model will closely mirror that of its predecessor.

“There’s been some work to better tune the suspension to the latest generation of Label A tyres, which help us with overall efficiency in terms of CO2 emissions and the like. However, there are no major changes, either to the steel spring or air-sprung setups.”

"at the expense of the rotary controller"

I wondered if they would drop this in the next update. I use mine as I find the touchpad awkward to use, as I like many am not left handed a problem for UK and other right hand drive markets. Yes I know you can talk to the system but unless that has been tweeked then getting it to deliver as asked can be frustrating

Clearly Volvo got their front end design spot on for Mercedes to want to copy it.
mx5xm 23 January 2020

The awful grill meets hood design seems to still exist. It really is an awkward design and one that they should have remedied by now.

We went to check out the estate at a local dealer and the rear seats are not deep enough to be comfortable! This seems to be a real failing that does not exist on the BMW 5 Series which we test drove. Many YouTube reviewers pointed out this failing. VERY dissapointed as we had assumed the Mercedes E would be our nest family car. Hello BMW.