BACK TO ALL NEWS
Currently reading: Mercedes EQA: electric crossover drops disguise in new images
UP NEXT
Spending 48 hours touring in a Ferrari Roma

Mercedes-Benz has officially previewed its EQA electric crossover, which is undergoing winter testing ahead of an expected unveiling in November.

Although the car is still disguised, the new images show that the firm's second fully electric model will bear a close resemblance to the combustion-powered GLA on which it is based. Styling features unique to the electric model will likely include a blanked-off front grille, bespoke light clusters and aerodynamically focused wheel designs.

Speaking at the reveal of the second-generation GLA last year, Mercedes boss Ola Källenius stood beside a preview image of the EQA, showing a bodystyle closely linked to that of the new crossover. "It's definitely a love child," he said, referencing the EV's resemblance to the GLA. 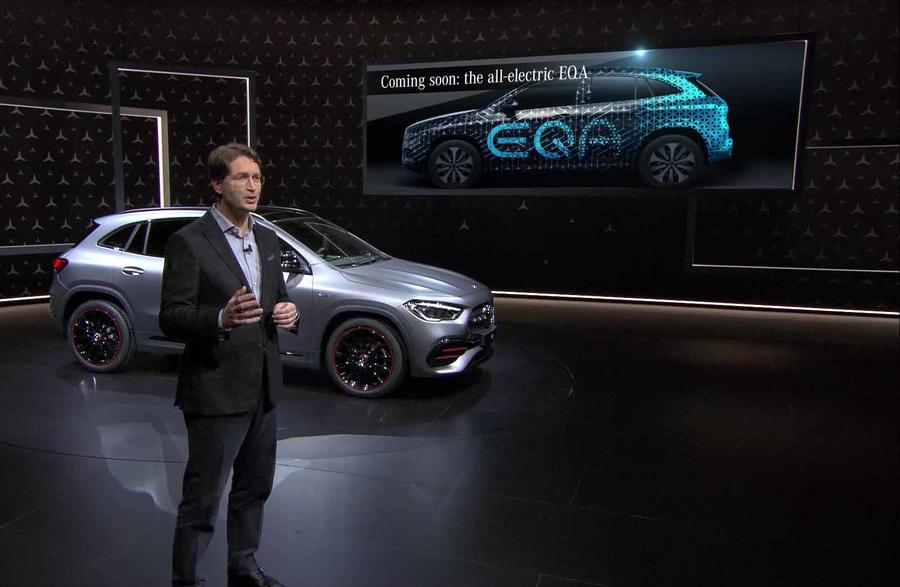 Autocar first uncovered that the EQA would be a crossover, rather than a hatchback as originally expected, when a prototype was spotted in an underground car park in Stuttgart, Germany, plugged into to an EV public charging unit.

The GLA makes a more suitable base than a hatchback for an all-electric model like the EQA because the higher roofline allows more space to be used under the seats to house battery cells without noticeably harming interior room. Mercedes' EQ EV division has also launched its first electric model, the Mercedes-Benz EQC, as an SUV, with the GLB-based EQB soon to follow.

Although the Concept EQA of the 2017 Frankfurt motor show was a three-door hatchback, the GLA-based production car looks to take many of the show car's visual cues, including a blanked-off front grile and unique front fascia, along with bespoke front and rear lighting. 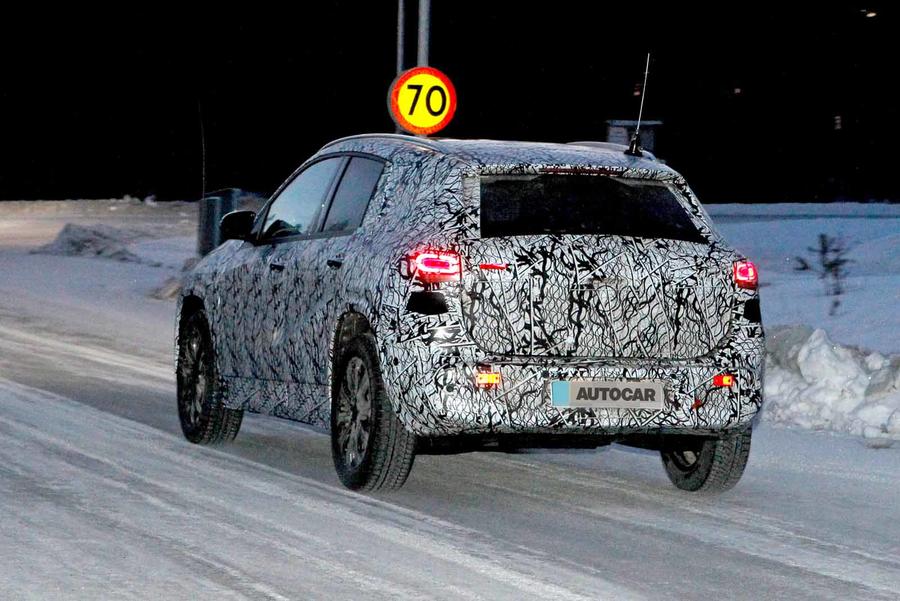 Mercedes has confirmed that it will build the EQA at its plant in Hambach, France, where the electric Smart models are currently made, following an investment of €500 million (about £438m). It will be the first Mercedes model to be built in France.

Before stepping down as Mercedes boss in 2019, Dieter Zetsche said: “The EQ line-up will cover different vehicles and one of them will be a compact car.”

Mercedes is pushing to enhance the productivity of its global plant network, with the Hambach site becoming specialised in EVs. This will help the brand to increase its EV production output without affecting the supply of petrol and diesel models.

Mercedes production chief Markus Schäfer said the Smart plant will grow to "become a part of our global compact car production network, with the lead plant in Rastatt, Germany".

The starting point for the EQA is a new electric vehicle platform developed by Mercedes for use in all upcoming EQ models. Known internally by the codename EVA (electric vehicle architecture), it has been conceived to allow the new model to be built alongside Mercedes' conventional compact car models in the same factories that produce the A-Class, B-Class, Mercedes-Benz CLA, CLA Shooting Brake and Mercedes-Benz GLA.

The flexible platform is planned to support either front-, rear- or four-wheel drive, with either one or two electric motors and a scalable battery mounted low down within its flat floor structure, operating on an 800V electrical system that can provide rapid charging.

The Concept EQA holds clues to the final make-up of the production-spec model. As with the EQC concept, an illuminated black panel incorporating distinctively styled laser-fibre headlights is used up front, ensuring the Concept EQA instantly stands out from the existing range of compact Mercedes models.

The high-tech front end also acts as a virtual radiator grille. It is programmed to alter the appearance of the new car dependent on the driving mode. In Sport, it depicts what Mercedes describes as a flaming horizontal wing, with a blue hue extending out from an oversized three-pointed star emblem. In Sport Plus, the black panel changes its look to mimic the shape of the Panamericana grille of AMG models, complete with vertical louvres. 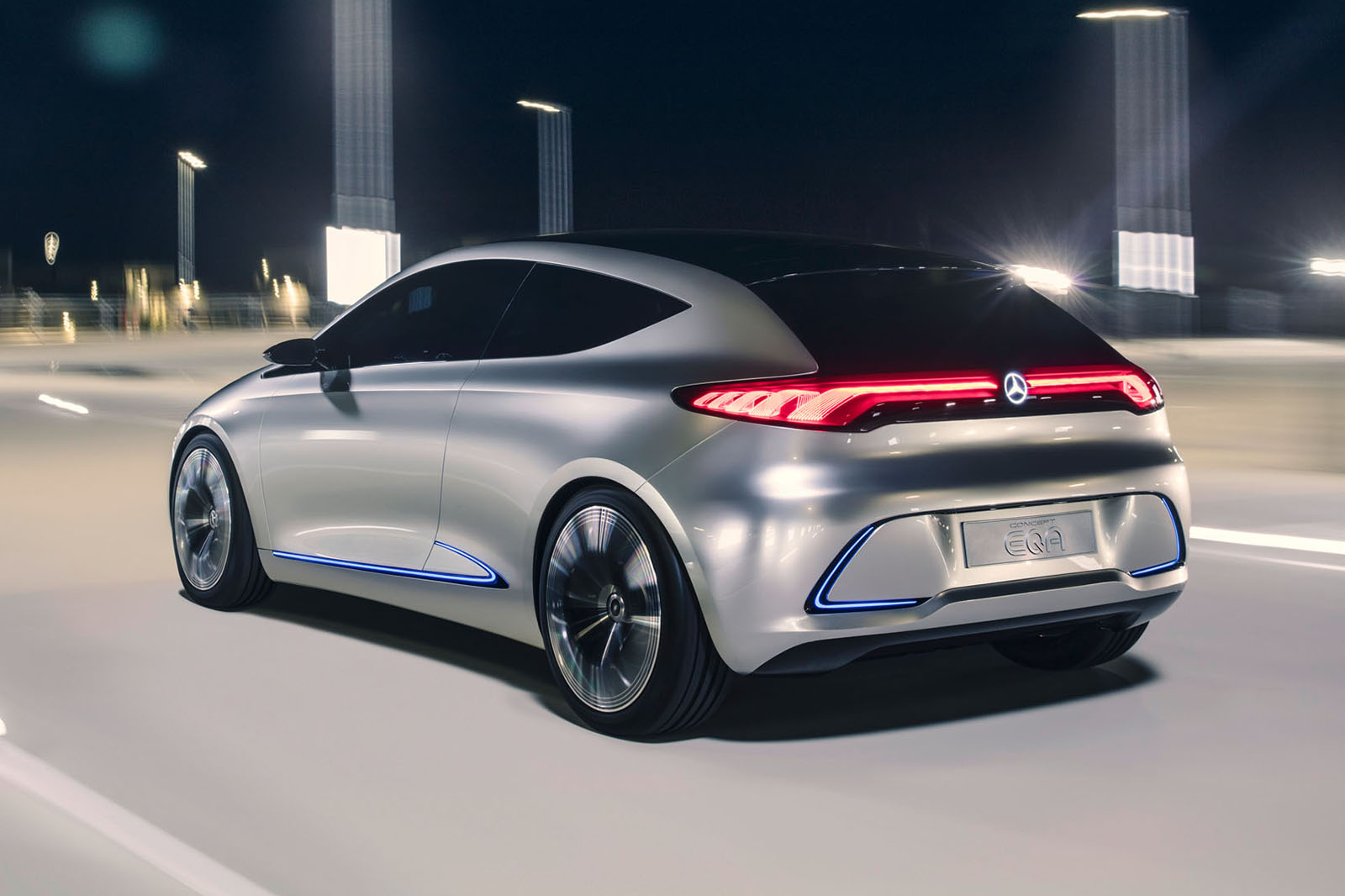 A similar black panel treatment is used at the rear, where it visually extends the depth of the rear window and serves to house the Concept EQA's full-width OLED tail-lights.

The blue hue of the grille is mirrored in a series of LED lights within the outer and lower sections of the front bumper, the side sills and rear bumper.

Conceptual in nature, the Concept EQA has a smooth aero-cheating look, including the loss of the windscreen wipers, the adoption of a remote opening function in place of conventional door handles and a darkened glass roof.

“With the Concept EQA, we have reinterpreted our design philosophy. We eliminated creases and lines. It is a bold statement for our EQ brand,” said Mercedes chief design officer Gorden Wagener. 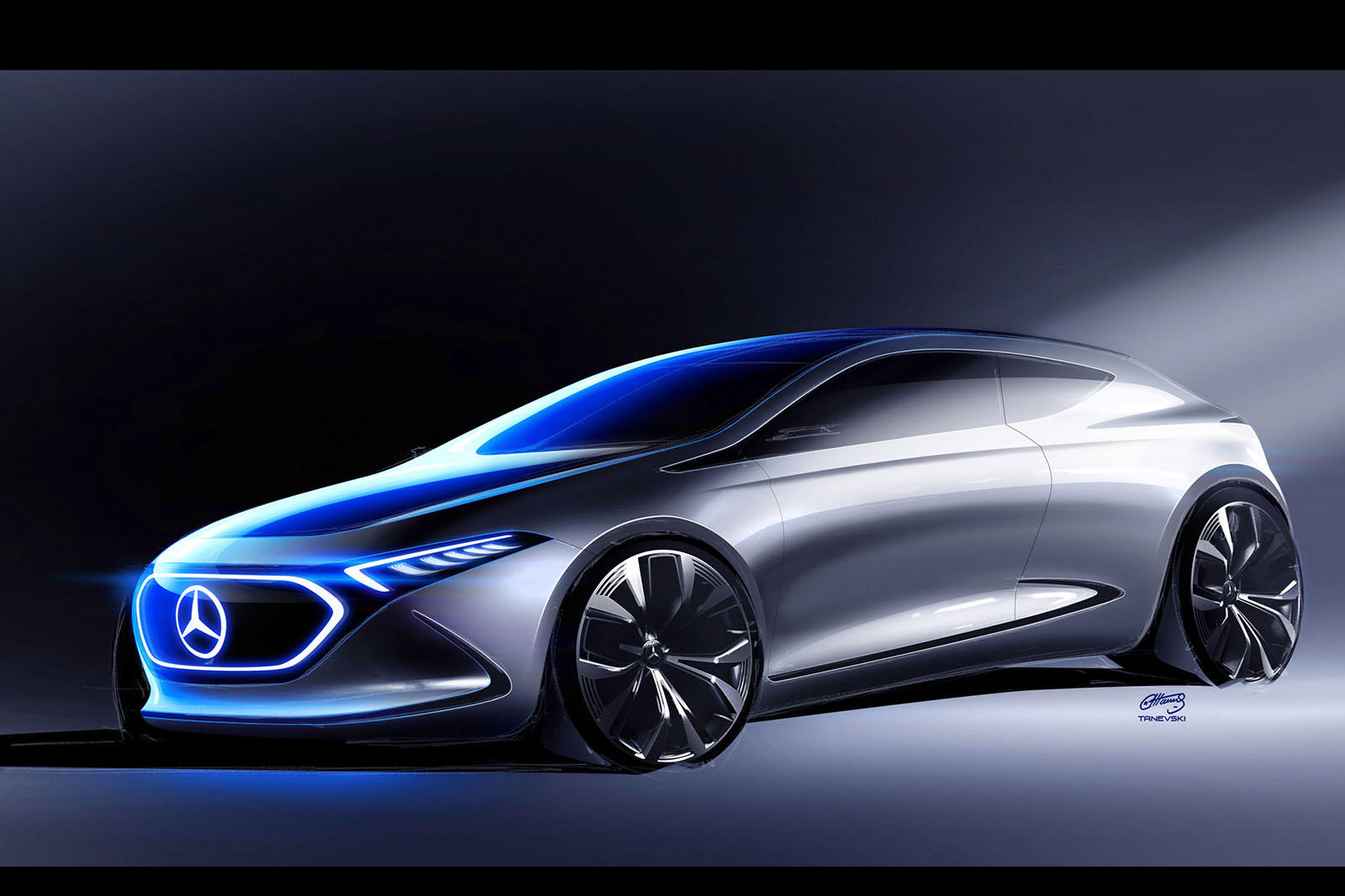 At 4285mm in length, 1810mm in width and 1428mm in height, the EQA concept is a scant 14mm shorter, 30mm wider and 6mm lower than the existing third-generation A-Class. It also uses a wheelbase that is 30mm longer than the entry-level Mercedes model at 2729mm.

Power for the second EQ concept car hails from a developmental driveline being readied for a range of EQ models. It uses two electric motors – one mounted up front underneath the bonnet and the other integrated within the rear axle assembly. The set-up, similar to that showcased on the EQC, delivers a combined 268bhp and more than 369lb ft of torque for a claimed 0-62mph time of “around 5.0sec”.

With a four-wheel drive system supporting variable torque distribution between the front and rear axles and a battery pack mounted low down within the floor structure, the concept suggests dynamic qualities for the production car that Mercedes has been quick to talk up, as well as hinting that it will offer different driving modes. In the Concept EQA, the driver can choose between Sport and Sport Plus to vary the torque distribution front to rear. 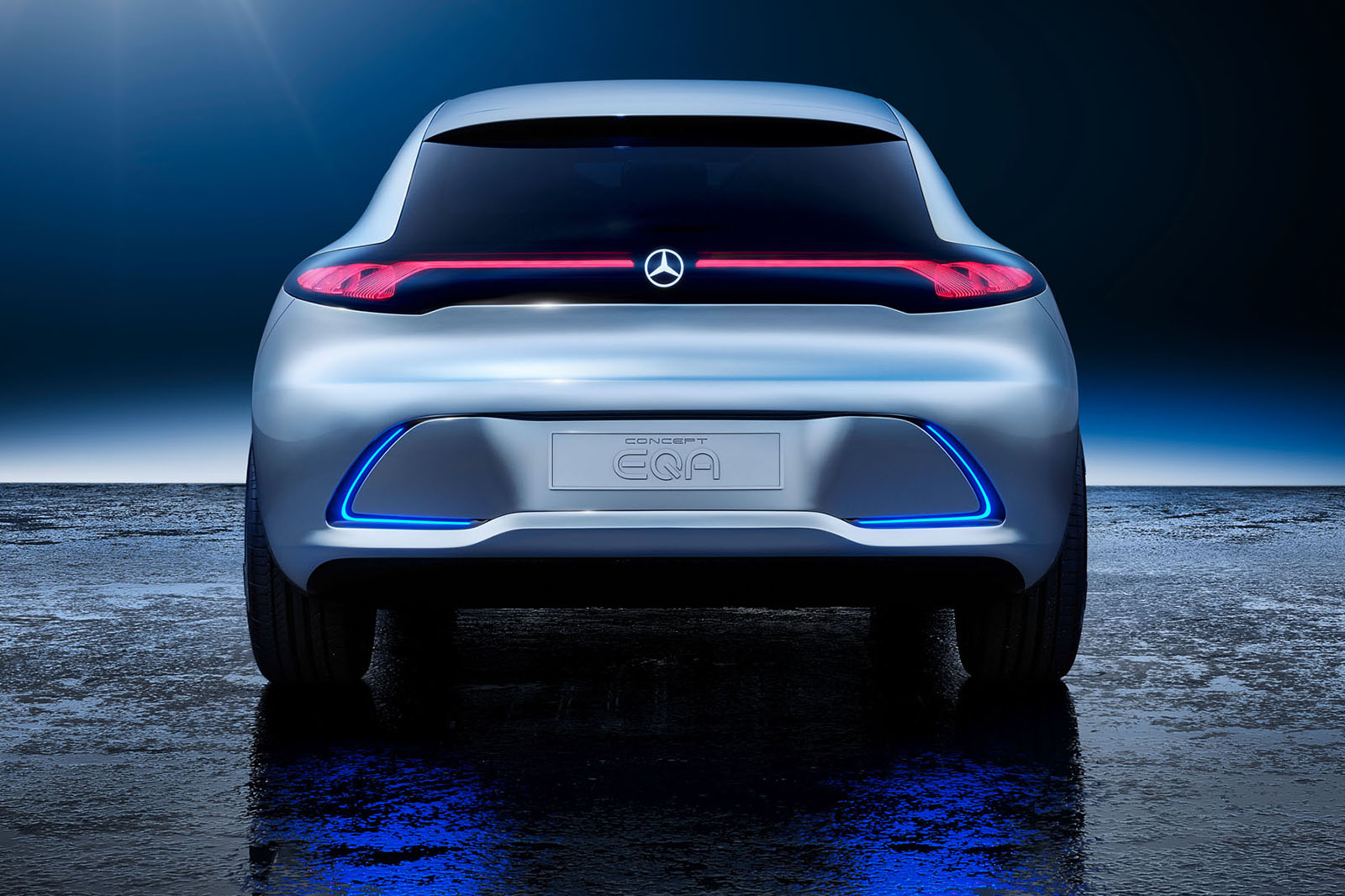 The EQA has been conceived to run a 60kWh lithium ion battery to be produced by Mercedes sibling company Accumotive. It is claimed to endow the entry-level electric car with an overall range of “around 400km” (249 miles) and can be charged either via traditional plug-in or induction means, with officials claiming 10 minutes of charging is sufficient to produce an added 62 miles of range on a high-voltage system.

Mercedes says its investment in US charging station provider ChargePoint will help its plans to roll out a range of EQ-branded models by allowing it to offer more charging solutions. At the unveiling of the Concept EQA, Mercedes announced plans to expand ChargePoint’s operations to Europe as part of efforts to expand the existing charging infrastructure.

Mercedes to launch 32 new models by 2022 in massive rollout​

Love the concept design, which in true fashion they seem to have sprinkled with predictability (practicality), and now it appears to be nothing special, dull, uninspriring ... Hopefully when the wrappings been removed it might stir the soul a bit.

This new Hyundai looks fabulous - a great improvement on the current Tucson.

I hope that the full width rear lights don't mimic those on the new TT which are used for full width brake lights, which are just too bright if you are stopped, at night, directly behind a driver who leaves his foot on the brake
leftfield lenny 5 October 2018

Foot on the brake pedal syndrome.