BACK TO ALL NEWS
Currently reading: New flagship Citroen saloon confirmed for production
UP NEXT
Mazda to launch own version of new Toyota Yaris by 2023

Citroën will launch a new large saloon to replace the C5 and C6, which will stand out from rivals by bringing "something different" to the class norm, CEO Linda Jackson has confirmed.

The new car, hinted at by the C-xperience concept revealed at the 2016 Paris motor show, will launch in 2019 or 2020, Autocar understands.

"What it won't be is a new C5," said Jackson. "But there will be a new large saloon, because having one in the line up is a crucial part of being a big manufacturer; to be credible you need a range across small, medium and large cars, including SUVs. Do that well, and you cover the requirements of volume and profit to succeed in this business across fleet and private sales."

Jackson confirmed that much of the business case for the car was built around demand in China. While the market there has pivoted from being saloon-led to SUV-led, large saloons still command a significant number of sales and provide strong profit margins. Last year, Citroen sales in China fell 47.3% as a result of the shift to SUVs and the growing competition from local car makers, a problem Jackson has sought to address by launching the C5 Aircross there.

"For all the change, China is still our second largest market, and saloons are still a significant part of that market," said Jackson.

Confirming that the C-xperience hinted at the saloon, Jackson added: "Like all concept cars, it was made to test reaction, and the car will evolve. But - and I know I'm biased - I loved it. It will inspire the production car and it gave a view of a luxury flagship without any of the traditional cues of chrome, leather or lacquered wood.

"It had an air of the slightly avante garde that will make it to production. It can also be the showcase for our ideal of redefining comfort, in terms of the interior and the ride and handling balance using our new Advanced Comfort suspension."

When it was revealed, the C-xperience was originally touted as a non-specific concept looking at future design directions the firm could take. The DS 5 was the largest car in Citroën’s portfolio prior to its separation from the luxury brand, although a version of the C6 is still sold in China.

At 4.85 metres long, the C-xperience is a similar length to the last C6. Its low height (1.37m), long wheelbase (3.0m) and swooping roofline may have been designed more for dramatic effect, but they were also interpreted as a sign of the Citroën design team’s determination to continue the left-field design strategy kick-started with the C4 Cactus in 2014. By comparison, a Ford Mondeo is 4.87m long and 1.5m tall and has a wheelbase of 2.8m.

However, Citroën insiders hope that it can stand out from established class leaders such as the Mondeo and Volkswagen Passat by invoking a more grown-up version of the design flair that has proved so successful on the C4 Cactus, C3, C3 Aircross and C5 Aircross.

It was also no coincidence that the C-xperience name referenced the CX, which was built between 1974 and 1991, winning the European Car of the Year trophy in 1975 and scooping more than 1.2 million sales during its lifetime. The CX was notable for — and named after — an aerodynamic profile that bucked convention and set new trends when it was originally launched. 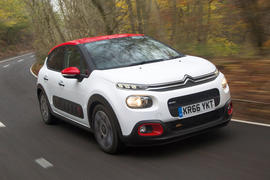 The new C5 and C6 would benefit not just from striking exterior design but would also get a similarly uncluttered dashboard, large touchscreen and lounge-like chairs in the front and rear.

“Our core message is ‘Be different, feel good’, and every car we build will embody that philosophy,” said Jackson.

Citroën’s Advanced Comfort programme will be key, too. Although this is expected to be introduced before the new saloons arrive, its basic tenet of using an all-new suspension system to put ride comfort at the heart of the car’s make-up, while also filtering out external noise and vibration, brings Citroën back to its historical core strength of creating visually arresting cars that prioritise comfort. Potentially, it also gives Citroën a technological edge over its rivals, underpinning another core brand value established under Jackson’s leadership of offering cutting-edge technology.

“We have the history and the DNA to build unique and rewarding cars,” said Jackson. “We want Citroën to be an attractive, aspirational and iconic brand, whichever segment it is operating in.”

My comment on the German brands being on the wane is personal. I think they have extended themselves into every segment and where they used to be  special that is no longer the case. They have become simply at bit boring.

Yes La Deuche, they were, but you may have noticed we are not living in the 90's any more and that M-B are giving BMW and Audi a kicking at the moment!

....absolutely hilarious, particularly the bit about M-B's star being on the wane!

Clearly not based this opinion on any fact then?

I am glad to see Citroën producing a large car. The French manufacturers are upping their game considerably with some nice cars in the pipeline. I think the old adage about reliability is a bit of a nonsense really. Plenty of old bangers here in the Dordogne with many cars 20 +

Will they succeed ? Not so sure as in Britain people want the German brands. Many seem to forget the very poor reliability of Mercedes in the 90’s. Personally  I think their star is on the wane and  I would really like to see Citroën succeed.